In Defense of the College Football Recruiting ‘Hat Dance’ 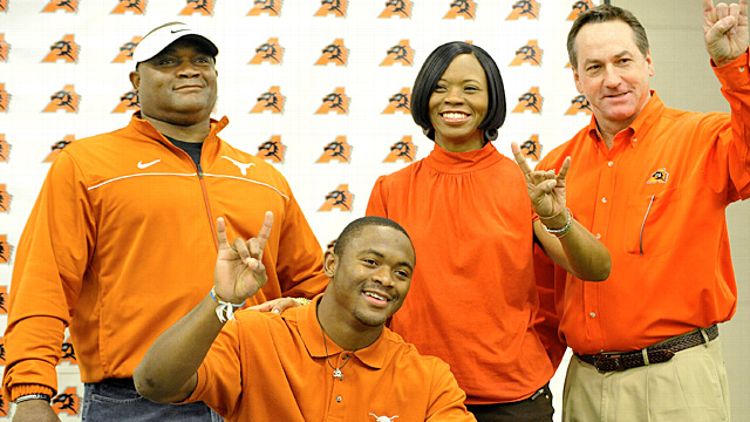 Now that Notre Dame has been buried in a deep grave, we should probably talk about recruiting. If there’s a January ritual fans hate, it’s the recruiting “hat dance.” It goes like this: A recruit holds a ceremony at his high school gym or at a TV station. In front of him are the flat-brim hats of four or five schools that have offered him a scholarship. He picks up one hat … and puts its down. He picks up a second hat … and puts it down. Finally, he picks up the right hat and announces his commitment … at least until next week, when that gray-shirt from Nick Saban comes through.

The recruiting hat dance has more variations than its Mexican cousin. In 2009, Bryce Brown, a running back from Wichita, Kansas, produced a University of Miami hat. According to a Sports Illustrated account, he then handed the Miami hat to his brother, who already played linebacker for the Hurricanes. This thing must be yours. Brown put on a Tennessee hat. (He later transferred to Kansas State. Bryce Brown, as the saying goes, wears a lot of hats.)


In 2006, guard Antonio Logan-El set what SB Nation called “the standard by which all future hat ceremonies would be judged.” As Bill Connelly reported, Logan-El, a Maryland commit, stood before a crowd at the Baltimore ESPN Zone that included Ralph Friedgen’s wife. Logan-El cast aside his Maryland hat. He committed to Penn State. “Mrs. Friedgen famously asked for her check and charged out of the restaurant,” Connelly wrote.

A Sporting News survey from July found that 59 percent of recruits disliked the hat dance, while 40 percent liked it. Even those in the “pro” camp gave notes on hat-dance etiquette:

“It would be cool to be able to do it, but I wouldn’t want it televised.”

“I like it, but not when they pick up a hat and then are like, ‘Naaah’ and throw it behind them and pick up another hat instead.”

So why do we fans hate the hat dance?

First, it’s a ritual reserved mostly for elite players. (You wonder how many of the recruits who said nay in the Sporting News survey wished they could have a hat ceremony of their own.) It reminds us of college football’s yawning inequalities: Central State versus Alabama, LSU, and those guys. As a Scout.com writer put it last month, “It was another ‘hat dance,’ which meant bad news for Northwestern, or so everyone thought.”

The second reason we hate the hat dance: It shows that the recruiting game has been swallowed by the media. “ESPN encourages kids to do the hat dance,” a poster with the handle 84DAVID wrote on NDNation.com a few week ago. He added, “I don’t really blame the kid too much because they are told by the recruiting creeps that it’s cool and will get them on TV.” Even if we ignore the irony that 84DAVID was posting on a college message board — we’re all recruiting creeps now — you see his point. The hat dance proves the vision of Ma and Pa meeting with Coach over supper is dead.

We hate the hat dance because it adds mystery to a recruitment. Recruiting shouldn’t be a mystery anymore, not when we pay $9.95 a month for 247Sports’s Baker Street Irregulars to sniff out the truth. But if you hang out on message boards, like I do, you know there’s one recruitment each year that defies reporting. “This is another recruitment that will go into the hat dance a genuine mystery,” the MGo Blog wrote of Armani Reeves, a class of 2012 cornerback who signed with Ohio State. The hat dance reminds us that for all the money we devote to recruiting studies, it can still feel like roulette.

Finally, we hate the hat dance because it makes it feel — for a brief second — that the recruit is bigger than the program. In 2010, Northwestern’s Pat Fitzgerald moaned, “We’re glorifying the committing and recommitting and the hat dances. What are we doing?” We’ll come back to that in a sec.

I don’t hate the hat dance, and here’s why. Recruiting was already a media thing. If you watched 30 for 30’s The Best That Never Was documentary, you saw the mountains of newsprint (and one classic book) devoted to Marcus Dupree’s recruitment. When a recruit like 2012 signee Vadal Alexander is praised for doing things right, what the media really means is he called the papers and websites and gave them the scoop first.

Yes, the hat dance is spectacular and absurd. But: All recruiting is spectacular and absurd. Lately, Texas A&M’s Kevin Sumlin has been MacGyvering to high school football fields in a maroon helicopter. If a coach at a public school can spend money to hire a chopper, then a player can screw around with some New Era hats without violating the moral order of the universe.

What really irks fans about the hat dance is the loss of control. In college football, a team has athletes under its thumb more than it does in other sport. Scholarships can be offered and withdrawn. Players can be quietly run out of the program. They’re paid practically nothing and have to hang around for three years before turning pro. All players, star and scrub alike, are consumed by a giant, multimillion-dollar brand. The idea that we’d lose a smidgeon of this control — that our brand could be flung onto the floor by some badass wide receiver — is terrifying.

Moralizing runs high in college football because all of us, I think, smell something rotten. One of these days, we’ll figure out what’s really rotten. Guess what? It ain’t the hats.

Filed Under: The U, Bryan Curtis, College Football