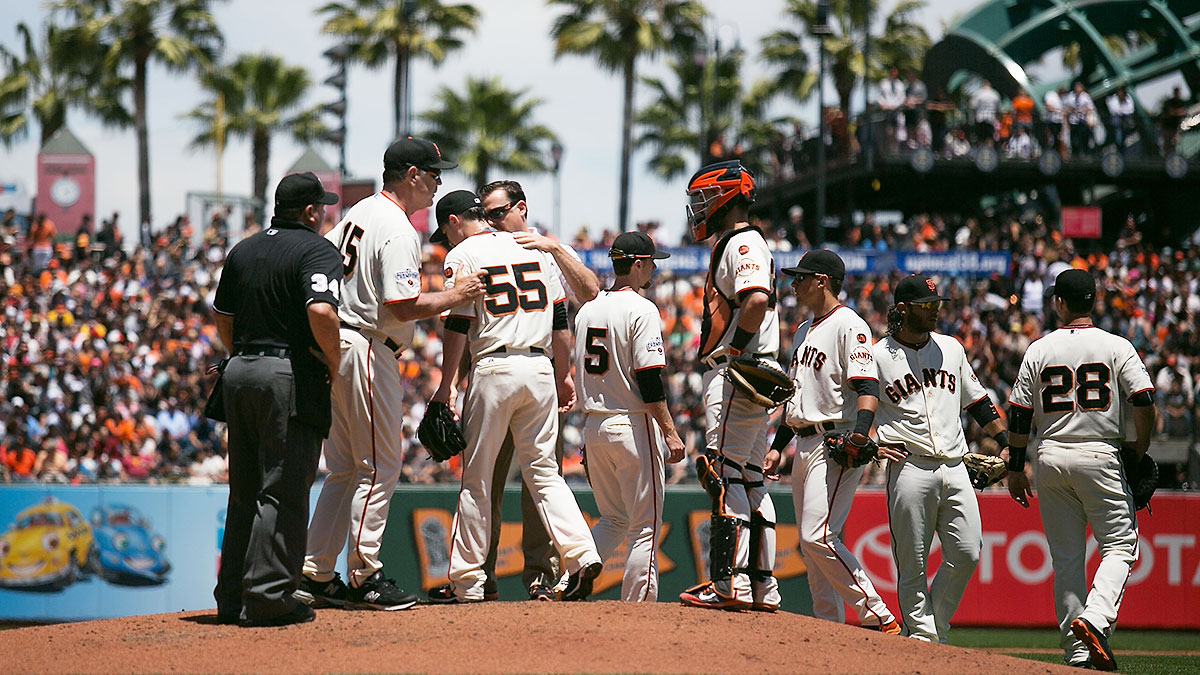 Tim Lincecum is 31 years old. I was honestly a little surprised to see that figure, because in my mind, Lincecum is sort of frozen in time as a 27-year-old — both in public persona and in that his last great season came at that age — but also because the problems he’s had since 2012 are the problems of an older pitcher.

It’s one of the many contradictions that make Lincecum so fascinating: He was once one of baseball’s premier power pitchers, and despite being just 5-foot-11, he was one of the game’s best athletes, a hyperflexible, rubber-armed freak who had famously relieved on Fridays and started on Sundays while at the University of Washington. Lincecum spent his career giving off the patchouli-scented air of a 15-year-old slacker who has really strong opinions about Pink Floyd, but a large part of the Lincecum legend is that his father trained him to become a ballplayer from a young age.

So it was sad to read Andrew Baggarly’s recent interview with Lincecum in the San Jose Mercury News. Therein, the two-time Cy Young winner, who’s been sidelined with a hip injury and chronic back issues, contemplated whether he might have thrown his last pitch in a Giants uniform, saying things like “I’m out there throwing 87 mph. I don’t necessarily know what my stuff looks like anymore.”

Lincecum’s decline is sad for the normal reasons — he used to be good and entertaining, and now he’s not — but also because he was once such an outrageous, peanut-flinging figure, and now he’s very much aware of his own mortality. Between his stuff, his delivery, his stature, and his personality, Lincecum was, insofar as a baseball player can be, unique.

He’s not totally done if he doesn’t want to be — Mark Prior played in Triple-A in 2013, after all — but the Lincecum I hope we’ll all remember is gone, and has been for some time.

So much of the Giants’ past three World Series titles was built on pitching, as it would be if any team spent first-round picks on Lincecum, Matt Cain, and Madison Bumgarner over the span of six years.

Now, not only is Lincecum hurt and/or bad, so is Cain. And yet the Giants are still very much in the NL West race with a month to go, a reality that confounds the team’s reputation.

There are explanations, chief among them that Bumgarner is a better pitcher than he was in 2010 or even 2012. He got lumped into a Big Three narrative for a long time without ever really being more than above-average, but over the past three seasons, he’s cut his walks and increased his strikeouts — to say nothing of putting the team on his back in last year’s postseason run — and the results now match the conventional wisdom.

The Giants also have experience replacing one of their top starters. Remember, the Big Three that won the World Series in 2010 was Lincecum, Cain, and Jonathan Sanchez, who went immediately to pot afterward.

Replacing pitchers is, as is often discussed, much easier for San Francisco than for other teams. The Giants play in a preposterously pitcher-friendly park, with a great framing catcher in Buster Posey, a reliable and bizarrely stable bullpen, and a major league coaching staff that might be the best in the game at player development. That’s how Ryan Vogelsong, Yusmeiro Petit, and Chris Heston have come out of nowhere to become solid big league pitchers. And if the development path fails, there’s always the option to go out and acquire an established veteran starter, like Jake Peavy, Tim Hudson, and, most recently, Mike Leake.

But San Francisco earned its identity of winning behind a legion of top-notch starting pitchers, and in 2015, that identity has gone completely in the trash. Only two Giants starters have been with the team all year and posted even an average ERA+: Bumgarner and Heston. Hudson, Peavy, and Vogelsong have joined Lincecum and Cain as being either unable to pitch for long stretches or so bad that some wish they’d been unable to pitch for long stretches.

The Giants, believe it or not, are now an offense-first team. They’re first in the NL in batting average, second in OBP, and fourth in slugging percentage. Despite playing in the game’s least hospitable ballpark for runs, they’ve scored the third most in the National League.

In short, the team that Lincecum will leave behind this fall is no longer the one he led to a championship only half a decade back. Because so many of the names are the same, much of this evolution has gone either unnoticed or underemphasized, but it’s still true: Lincecum is no longer recognizable as what he was a few seasons ago, nor is the team he led to its first title in 56 years.

In this manner, which is both laudable and tragic, we’re reminded of one of the ways in which sports imitate real life. Institutions often carry on, even as they leave behind the individuals who made them great. It’s the byproduct of progress.