This Is Our #Youth: The Kiddie Brigade Breaks Out in the NHL Playoffs 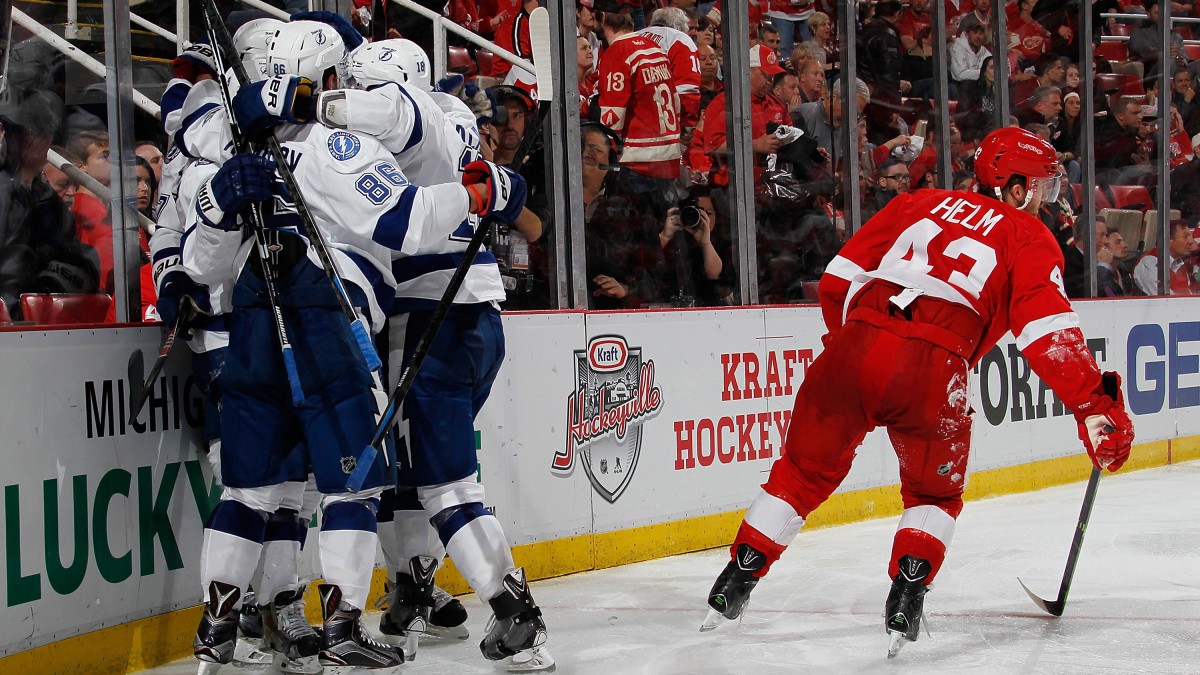 At the end of Tuesday night’s Inside the NBA, Charles Barkley sneaked in a little hockey talk. He’d just seen the Washington Capitals win in overtime, and he wanted a status update on another game. “Does anybody know what happened to the Blackhawks?” he asked. (They were in the midst of a triple-overtime win as Barkley was staring into the camera.)

His cohosts teased him: Shouldn’t he be watching basketball?

“I got two eyes, fool!” Barkley fired back. As the show faded out, he had one last off-message. “Come on, Tampa Bay! I ain’t give up on you yet, Coach Coop!”

Barkley apparently met Lightning coach Jon Cooper many months ago in Los Angeles, and the two made an impact on one another: Cooper, informed of the shout-out, declared Barkley “one of the greatest guys I’ve ever met” and “a class act.” Midway through last night’s Game 4 in the Tampa Bay–Detroit first-round series, however, it seemed like Barkley’s faith might have been misplaced.

The Lightning were down 2-1 in the series, and 2-0 in the game. The Red Wings’ second goal had been the result of a flubbed play by struggling Tampa Bay goalie Ben Bishop. The Detroit fans were giddy: On the television broadcast, you could hear them audibly singing along with the music inside Joe Louis Arena, even after their beloved DJ had cut off a tune. Please tell me whyyyyyyyyyyy, they yelled, a cappella, as if “My Own Worst Enemy” were “The Star-Spangled Banner.” My car is in the front yard, and I …”

The second intermission came and went. Fourteen minutes elapsed in the third period, and still Detroit led 2-0. But Tyler Johnson, the undrafted, diminutive Lightning forward who tied with Steven Stamkos for the team scoring lead this regular season, got the puck in the neutral zone, sped over the blue line, cut in toward the Red Wings goal, and went bar-down to give the Lightning life. Just more than a minute later, he made a stunning assist to Ondrej Palat for the game-tying goal.

And two and a half minutes into overtime, Johnson looked just like Stamkos, one-timing the puck into the back of the net from the left side while going down to one knee, both out of exertion and in celebration. Just like that, the Lightning went from left for dead to all tied up 2-2 in the series and heading back home for Game 5. As always: Trust the words of Charles Barkley, particularly when it’s about hockey. 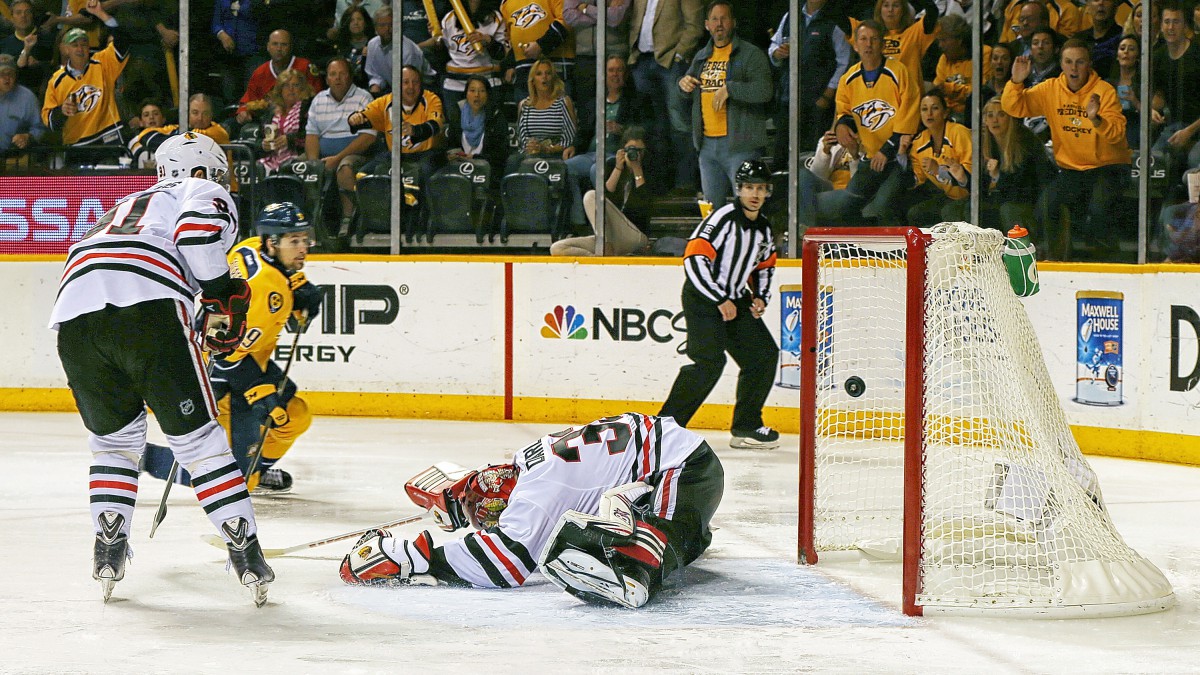 At 24 years old, Johnson — who just last season was a finalist for the Calder Trophy, awarded to the league’s best rookie — was actually one of the older players to have a game-changing impact around the NHL last night. With the exception of Daniel Sedin’s game winner to keep the Canucks alive against the Flames, most of the biggest performances came from guys still in their early twenties.

In Nashville, the Predators, coming off the rough triple-OT loss in that game Barkley was inquiring about, fought off elimination at the hands of Chicago with a 5-2 win that included a hat trick from 20-year-old Filip Forsberg. It was the first playoff hat trick in Nashville’s history.

Sure, one of the goals was an empty-netter. But it was still a bit of a “fuck you” game for Forsberg, and not only toward the Blackhawks: Earlier in the day, when the NHL announced the short list for Calder contention, Forsberg’s name was not called. He’d spent most of the year as a presumptive front-runner, but a late-season slump combined with the ascent of Ottawa’s Mark Stone left the young Swede as the odd man out. What better way to respond to the snub?

If there was any contingent of folks made secretly happy by Forsberg’s Calder omission, it might have been Washington fans: The Capitals drafted him in 2012 but traded him rashly in 2013. More likely, though, Caps supporters had bigger things on their minds, like Evgeny Kuznetsov, the 22-year-old Russian whose two goals and an assist last night led Washington to a 5-1 win and a 3-2 series lead over the Islanders. Kuznetsov batted the puck out of midair; he backhanded it on a breakaway. His enthusiasm was infectious.

Kuznetsov captivated Capitals fans long before he even arrived in America. After being drafted in 2010, he was expected to play for a little while in the KHL before coming to D.C. But he remained in Russia for much longer, heightening both the doubt surrounding him and the anticipation. Last spring, he finally joined the team, living with captain Alex Ovechkin and learning the language — Brooks Orpik taught him the phrase “it’s not my first rodeo” — and a new system of play.

“When I score I hear loud in the stadium, I feel like crazy and I want to say thanks for all who come in the game,” Kuznetsov said after the game. “More loud than the Islanders game and hope see you next round.” He identified his favorite goal as the one Karl Alzner scored, because it was the game winner.

I can’t say for sure, but I assume Charles Barkley was happy with this particular outcome: Last week, during a radio hit on Mike and Mike, he explained why he was rooting for a Capitals victory. “I’m pulling for Ovechkin,” he said, “so he can get off the list I’m on — never won anything. So I root for Ovechkin.”

Barkley wasn’t the only NBA guy with a wandering eye, by the way.

“How much fun is the Blackhawk/Predator game?” Phil Jackson tweeted last night. “1/2 period with no stoppage in the 1st after playing over 100 min in OT’s Tues. 1-1 into 3rd.” A few minutes later, with the Predators having grabbed a 4-1 lead, Jackson declared it time for bed. “Look forward to next bout,” he wrote. “#youth#speed.”

'Jalen and Jacoby': Breaking Down the First Round, the Future of the Thunder, and More

The Rise and Rise (and Rise) of Stephen Curry: The Wildly Miraculous and Quietly Inevitable Success of Golden State’s Point Guard