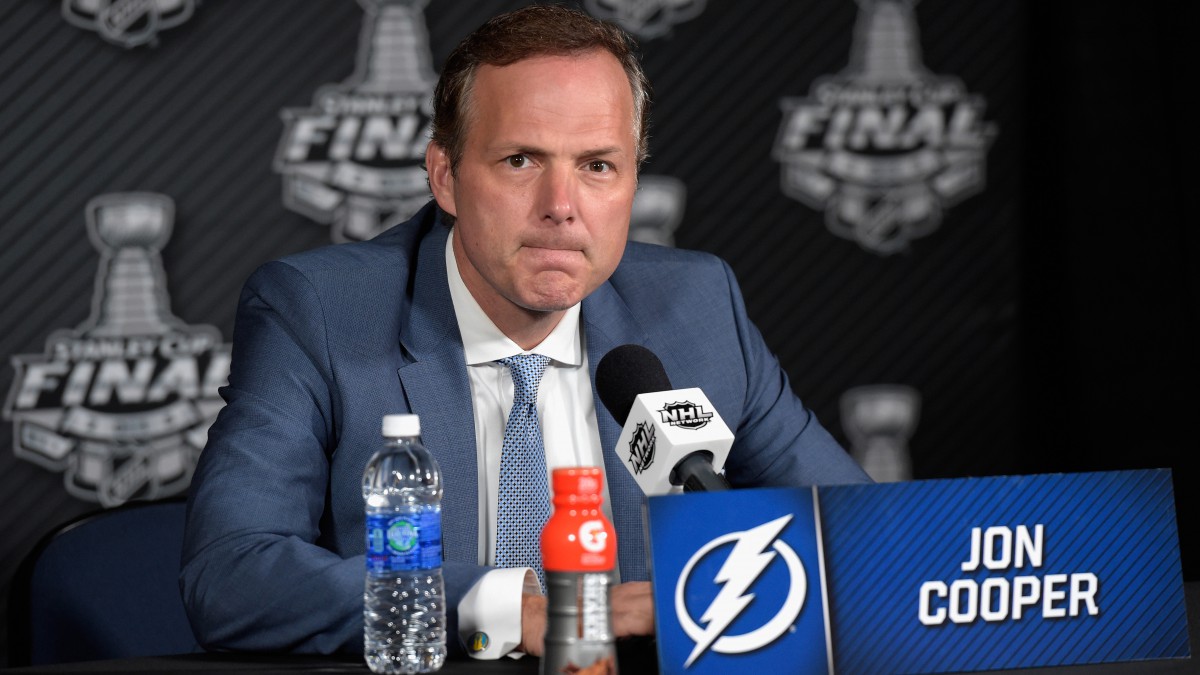 Jon Cooper prefers to commence his press conferences with tiny zingers. He squints into the spotlight and feigns blindness. He invents issues with the microphone placed before him, as if he’s never encountered one before. He slides his water bottle a few inches to the left or right and then turns and asks an NHL rep if that’s in keeping with the league’s sponsorship and branding agreements.

When media availabilities are held in small, cramped quarters, he comments on the stench inside the room. The other day, he looked around, declared things “musty,” and posited that everyone must have been out and about in Tampa the night before. Before Game 7 against Detroit, he noted that “it smells really bad in here,” adding “no offense.” None was taken: If there’s one thing sportswriters will lap up every time with hearty chuckles, it’s a good, solid neg.

Even following a frustrating outcome, such as the Lightning’s 2-1 Saturday loss to Chicago in a contest that left players injured and egos bruised, Cooper aims to disarm. He appeared weary, but still he quipped as he sat down that he’d at least be up there longer than he had been the last time. (It was a reference to earlier that morning, when his press conference had lasted 30 seconds, the only question being the inevitable and unanswerable one about whether an ailing Ben Bishop would start in net.)

He was going for his usual lightness, but it landed a bit more heavily this time. The Lightning hadn’t just lost, they’d been defeated. Nikita Kucherov, the celebrated Triplets line’s scariest member, had been injured in a headfirst collision with a goalpost and never returned to the game. Bishop strayed from the net and collided with teammate Victor Hedman in no-man’s-land in what looked like a scene from an early Mighty Ducks blooper montage.

Late in the game, with the Blackhawks up 2-1, Lightning fans raged and neutral observers puzzled over a number of tactical decisions. Why was the plodding Brenden Morrow, bless his old grizzled heart, on the ice with the Lightning down a goal with five minutes to play? Why was Steven Stamkos parked on the bench for upward of two minutes at a time? Why was no timeout taken? WTF regarding that too-many-men call against Tampa Bay with 8.8 seconds left?

In the locker room after the Chicago win, Stamkos betrayed a rare glimmer of vexation with what had happened. “I mean, I’m not the coach,” he said. “You’ll have to ask him that.” He added diplomatically that the team had won with its depth all season and that everyone always gave their all, but the point remained. Expectations were high for Cooper’s presser — even the typically docile Sports Illustrated NHL Twitter account said Cooper “deserved to be roasted” — but it passed mostly uneventfully. Still: It was the first time that anyone can remember that Cooper’s seat felt truly hot. 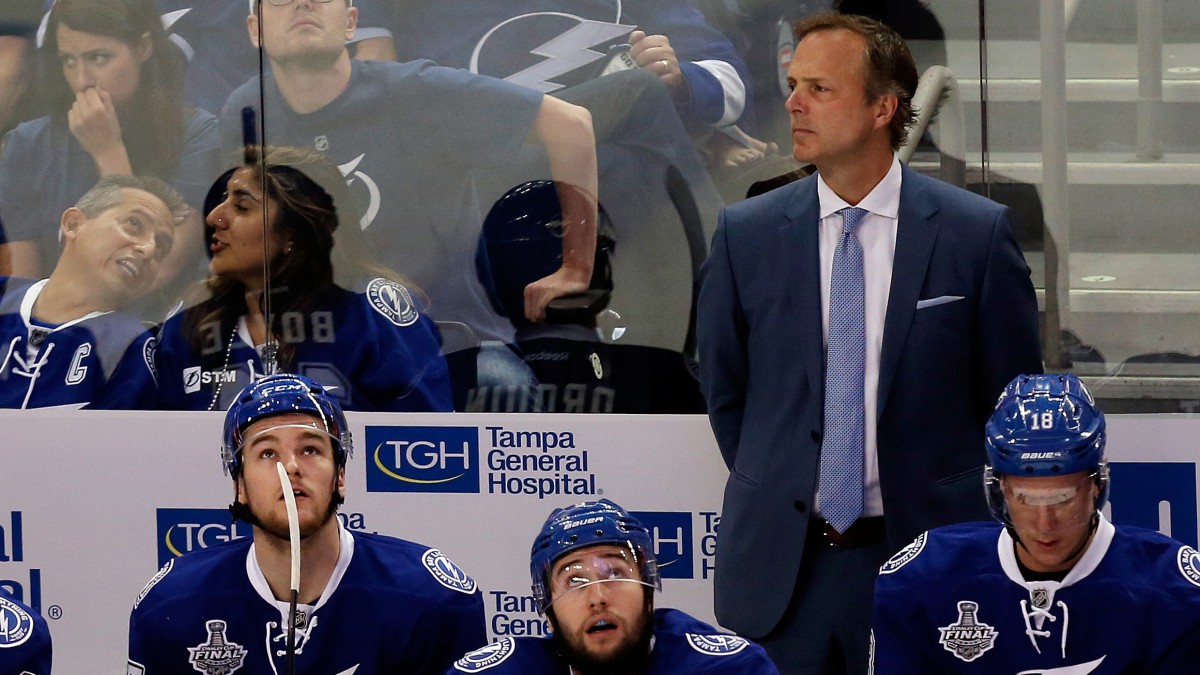 By now, the story of Jon Cooper has been well told: his former career as a defense attorney and his subsequent step-by-step ascension through the hockey ranks. It’s a journey that included character-molding moments like hammering nails into boards in hockey hotbeds like Texarkana. He has won championships at nearly every level and is oh-so-close to winning one in the NHL, a league that he reminds his players — and, you have to imagine, occasionally himself — is “big boy hockey.” It was fitting that at a press conference early in the series, his mom and dad stood against the wall, beaming proudly at their son.1

One of Cooper’s players told NHL.com that two of the coach’s rules for the team come from Wedding Crashers. Rule 76: No excuses, play like a champion. Rule 113: Don’t look for opportunities, make them. Such thoughtful irreverence is classic Cooper. But when a reporter asked him about a recent dinner out in Chicago, for which Blackhawks fan Vince Vaughn, dining nearby, picked up the tab, Cooper sensed it was better not to make it a big deal. “Just random,” he said of the night, seeming almost embarrassed by the question. “We’ve gone out as a staff together in every single series. Maybe there’s just a little more notoriety because we’re in the finals. Those are all just staff dinners.”

Watching Cooper navigate the novelty of the Stanley Cup final alongside his players has been fascinating. As he pointed out, Tampa Bay began the playoffs as the team with relative inexperience, a lovable bunch of young up-and-comers learning on the go. The same can be said for their coach. (Before games at Amalie Arena, the Jumbotron displays adoring footage of Cooper as if he’s just another one of the boys.) But there have been little stumbles here and there — mostly born of his lawyerly ability to pick his words precisely and still butt heads with the hockey world’s predilection for revealing little to the press.

Bishop’s shady injury has brought this tension to the forefront: Cooper tried to deflect requests for information that he has no intention of providing with his trademark humor. (Invoking the ghost of the famously reticent former Lightning head coach John Tortorella, as Cooper has done on more than one occasion, is always good for a press-distracting laugh.) But he occasionally runs the risk of being perceived as disingenuous, of his jokes seeming less folksy and more shtick. The hockey world is comfortable with coaches who speak in sentence fragments and dole out nuggets of information with the generosity of Soviet bread-line functionaries.2 It’s just not quite used to assessing the agendas of smoother talkers. As the stakes have been raised with each postseason contest, there’s been a learning curve for everyone both on and off the ice. As Cooper said after Game 5, “I guess we’ve gone from an inexperienced playoff team to an experienced playoff team.”

There’s truth in that. The happy-go-lucky Lightning struggled early in the first round, then went into Detroit down 3-2 and roundly beat the Red Wings on the road. After winning a tense Game 7, they mostly made a mockery of Montreal in the second round. In the conference finals, the Lightning absorbed a couple of blowout losses to the Rangers and rebounded to shut them out in Games 5 and 7 in Madison Square Garden. They crowed that Henrik Lundqvist wasn’t all that, that they weren’t scared of his “aura.” They were cocky, and they were also right.

But this isn’t the first round, or the conference finals, or even Game 1 of the championship. This is Game 6, the first evening The Cup Is In The Building, as you’ll be reminded ad infinitum. And it ain’t there to welcome Tampa Bay to the Windy City or pick up anyone’s dinner tabs. For all of the Lightning’s in-season experience, they’re now facing a Blackhawks team that has won two Cups since 2010 and will be buoyed by rabid fans eager to see the first championship won at home since the 1930s; this time, Tampa Bay can’t necessarily charm its way out of a jam.

In a media availability yesterday, both Cooper and his players seemed more relaxed than they had been in the aftermath of Game 5; Stamkos even said that he found the talk about his ice time “overblown.” Cooper answered questions about timeout strategy and lack of star player production with none of the prickliness that had been on display Saturday night. It’s quite possible that Tampa Bay could take Game 6 and put the pressure on Chicago. But for now, it’s squarely on the Lightning’s backs — and particularly on the back of its coach.

And that’s why this is interesting. Before his first season with the Lightning, Cooper said a GM had advised him that “the NHL can be toxic and negative,” and that Cooper didn’t have that in him, and that he should make sure it stayed that way. “Don’t lose that,” the GM warned.

Cooper hasn’t lost it. But it does seem like he has hardened just a teensy bit, not unlike a player who has been there, done that, and come out on the other side just a tad more battle weary, just a smidgen less naive. For those who love Cooper’s boyish forthrightness, this can be a sad thing, though it’s certainly not a bad thing. This is big-boy hockey, as Coop would say. Sometimes, after all, a chip on someone’s shoulder just makes for better, stronger padding.

The Foot That Ate Philadelphia: Joel Embiid’s Setback and What It Means for the Sixers