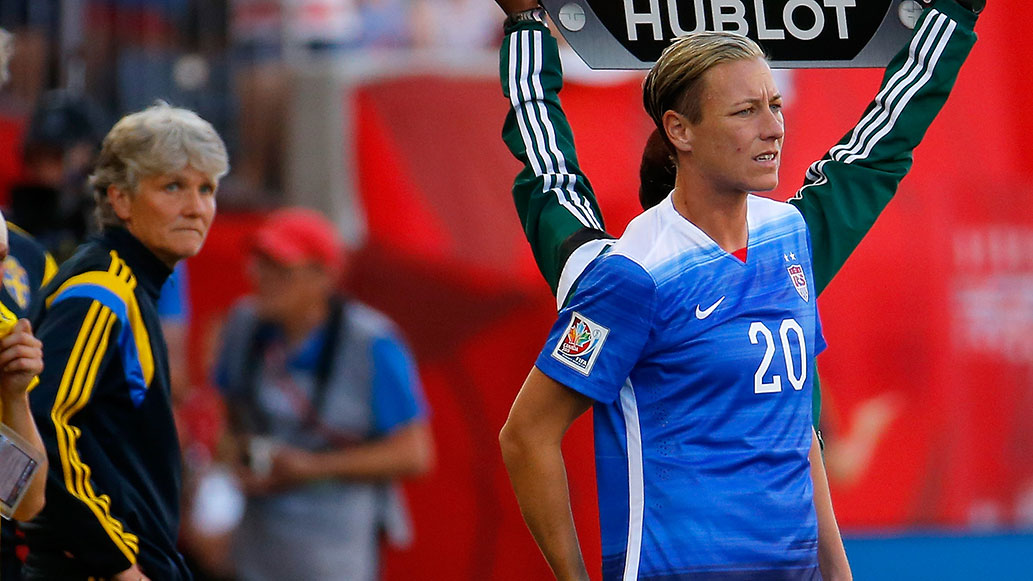 It was a little strange to see Abby Wambach start Friday’s game against Sweden on the bench. If there’s been one constant for the United States over the past 10-plus years, it’s Wambach rising above a crowd of defenders and launching a header past a helpless goalkeeper. She’s the all-time leading goal scorer in international soccer, among men and women — and yet the move to shift her out of the starting 11 wasn’t totally unexpected.

Although this was the first time Wambach didn’t start a World Cup match since 2003, she turned 35 earlier this month, and no one expected her to play every minute on the unforgiving artificial turf in Canada. Additionally, head coach Jill Ellis has a wealth of skill at the forward position. Against Sweden, she opted for the tandem of Sydney Leroux and Christen Press, two world-class attackers who would be all but guaranteed to figure in the starting lineup of almost any squad on the planet. The opposition, led by strong center back and captain Nilla Fischer, were a physical team, so resting Wambach was understandable, especially since a draw would give the Americans control of their own destiny with their easiest group stage game remaining.

They got that draw, but the Americans looked listless for long stretches of time as Leroux tried valiantly but failed to effectively fill in as a target forward. After Friday, it seems clear that Wambach — who made an appearance as a second-half sub and nearly broke the deadlock — needs to start for the U.S. if they want to give themselves the best chance to win. The question now is whether she can.

Wambach is clearly having issues with the turf. “The ball as it comes off my head against Sweden hits a dry turf and bounces higher,” she told ESPNW. “If it hits grass, it’s harder for a goalkeeper to react, so if the ball bounces higher the goalkeeper has more time to react off the turf.” She then added: “In the previous game, I don’t lay out and commit to those headers, and that’s why they glance off my head rather than me contacting them. For me, I definitely think that the U.S. has more goals if we’re playing on grass.”

As aging will do to you, Wambach’s also clearly not the player she once was. In the months leading up to the World Cup, she made the curious decision to train on her own rather than joining an NWSL team. She argued that she knew how best to prepare, that limiting the number of games would keep her fresh for the World Cup, and vowed to come to what will likely be her last major tournament fully fit and ready. She has always done things her own way, and has every right to. Still, getting your touch and your timing down is hard enough when you’re playing games. It’s even more difficult when you’re training solo, and Wambach hasn’t looked like her normally deadly self.

Plus, the inclusion of Wambach forces the U.S. to attack through her, leading to a reliance on long balls and the over-the-top type of tactics that Barcelona took out back and killed with a million quick passes. In the first match against Australia, Wambach received more passes from goalkeeper Hope Solo than every other U.S. player except one. Aided by the emergence of Press, the American team is attempting to transition into a more technical side, and 50-yard passes from your goalie to your target player doesn’t fit this model.

Still, when you have Wambach, the most deadly finisher around goal in the history of the sport, is the short-passing game really the right model? To not get at least 45 minutes per game out of your once-in-a-generation talent in her last World Cup seems ridiculous. Sure, the pass-and-move game is more effective in a wider sense, but Wambach might be the only player in the world who still makes Route one a viable path toward victory. Yes, she’s 35. Yes, she has missed a few on-a-platter opportunities in the opening two matches. Yes, the turf will wear on her body. No, none of that matters right now. Get her the ball near the goal and she’s going to score.

If there’s any problem with Wambach on the field, it’s that she’ll occasionally stray too far from the opponent’s goal. As MLS’s Devin Pleuler wrote after the Australia game: “When Wambach drops into the midfield to receive the ball (no matter if she’s successful or not), it causes a cascading loss of structural integrity in the US system of play. Suddenly without a viable vertical outlet, it makes pressing the US midfield a lot less dangerous.” Translation: The Americans need Wambach in beast mode where she’s best, as close to the goal as possible.

Before the Sweden match, the last time she didn’t start a World Cup game came on September 25, 2003, in a match against Nigeria. On Tuesday, the U.S. play the Super Falcons again, with a win guaranteeing a first-place finish in Group D. It’s time to begin a new starting streak. With any luck, it won’t end until July 5.