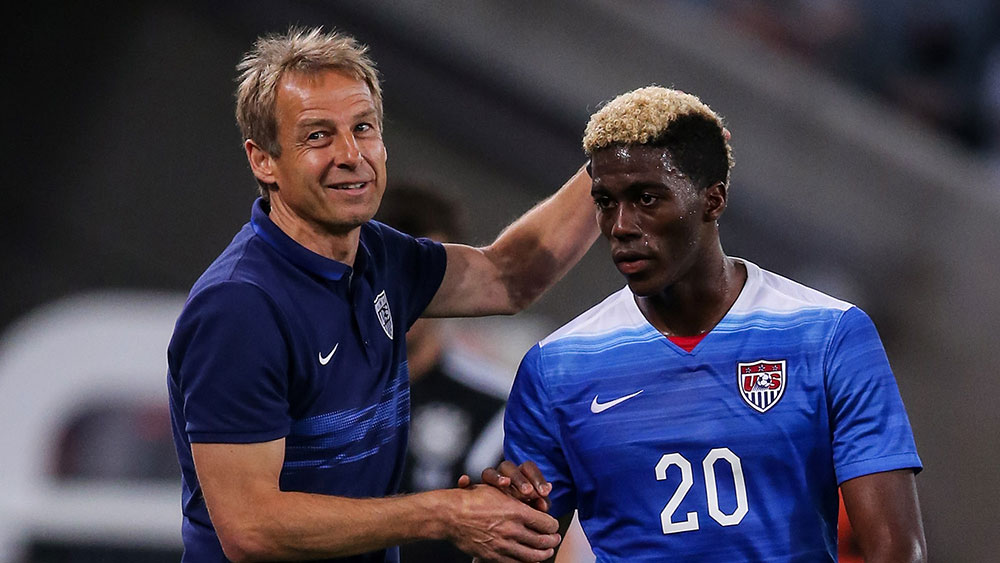 Remember when the United States women’s national team won the World Cup? That was fun, wasn’t it? Yes, it was, but you’ve already had 48 hours to celebrate, and since international soccer never stops, there’s another tournament starting tonight when the American men’s team take on Honduras in Frisco, Texas, to kick off the group stage of the Gold Cup.

As CONCACAF’s regional championship, the Gold Cup can be summed up as such: Every two years a bunch of teams play a bunch of games on American soil, and the U.S. and Mexico eventually meet in the final. In 2013, the Americans (with what was essentially a “B team”) defeated Panama to win the whole thing after Los Canaleros shocked El Tri in the semifinal, sending the Mexican supporters into a state of despair from which they didn’t recover until their team qualified for the World Cup. And in 2011, Mexico’s 4-2 defeat of the Stars and Stripes in the 2011 final cost then-coach Bob Bradley his job.

What’s at Stake This Time?

For starters, the tournament gives Jurgen Klinsmann and his coaching staff another chance to watch his players under pressure. Winning friendlies is nice — especially against the Netherlands and Germany, both of whom the Americans defeated last month — but friendlies count for nothing but points in meaningless rankings systems. Although the level of competition in the Gold Cup is lower and the U.S. will be favored in every game with the possible exception of the final against Mexico, a coach relishes the chance to see how his charges react in pressure situations.

More specifically, the tournament will give the Americans plenty of chances to try to break down the kind of bunkered-in defenses they’re sure to encounter as favorites throughout World Cup qualifying. Against Germany, the U.S. had to cede possession to a superior squad, and against the Dutch, the game turned into a track meet, but in group-stage matches against Honduras, Haiti, and Panama, the U.S. will have to prove that it can score when 10 men get behind the ball.

Beyond those more conceptual stakes, the winner of the 2013 Gold Cup (the U.S.) will play the winner of the 2015 Gold Cup for the right to go to the 2017 Confederations Cup, a tournament made up of the winners of all the world’s continental tournaments, the upcoming World Cup host, and the defending World Cup champ. It’s held in the country of the next year’s World Cup, so it’ll be in Russia … or maybe the U.S. …. or on the moon. Who knows. But if the Americans win, they will automatically gain entry. That is, at least until CONCACAF suddenly changes the rules to somehow ensure that there’s still a lucrative one-off game.

What About Klinsmann’s Job Security?

If the U.S. lost all three group stage games and Klinsmann came to the final one wearing a “Free Sepp Blatter” henley, we might start to having discussions about him getting the ax. But even if they actually did crash out during the group stages, he’d more likely smile, say something charming in that strange, German-inflected California accent of his, and we’d all move on.

Since Tax Day, the U.S. has gone 4-0 with wins over Mexico, the Netherlands, Germany, and Guatemala, and the team seems to have moved past the post–World Cup blues and remembered how to score. They are [knocks on the thickest wood he can find] playing some pretty soccer. Bradley lost his job in part because he lost the Gold Cup in 2011 (and because Giovani Dos Santos did this), but more of it came down to his larger struggle to refocus the squad after the 2010 World Cup. Klinsmann, to his credit, has managed to get the team beyond Brazil and trending upward as the next World Cup cycle begins in earnest. It’ll take a lot more than a bad performance at a tournament that doesn’t really matter for him to be forced out.1

What’s the Deal With the Roster?

It contains many of the names of players you’re probably familiar with: regulars like Jozy Altidore, Michael Bradley, Alejandro Bedoya, Clint Dempsey, Fabian Johnson, and DeAndre Yedlin. After them, it starts to get a little strange.

If there’s been a consistent philosophy to Klinsmann’s tenure, it’s a focus on youth. The manager has often given younger players a chance in big games — see: Yedlin and Julian Green against Belgium in the World Cup — and given that, it was weird to see 33-year-old Brad Davis (since removed due to injury) and 30-year-old Brad Evans make the roster. Depending on your point of view, you could say the same for 33-year-old Kyle Beckerman and 32-year-old Chris Wondolowski. While those four remain useful pieces right now, it’s tough to imagine any of them sticking around for the 2018 World Cup. Plenty of players left off the 23-man roster — Brek Shea, Juan Agudelo, and Miguel Ibarra, along with longer shots Perry Kitchen and Gedion Zelalem — seem much more likely to be contributors in the summer of ‘18.2

The focus on experience seems to run counter to a lot of what Klinsmann has preached. Hell, he even convinced DaMarcus Beasley, who retired from international soccer, to un-retire … and then left him off the final roster. I won’t say Klinsmann’s trolling the U.S. fan base with the inclusion of Davis, Evans, and a few others, but I also won’t say he’s not.

Who’s the Most Intriguing Player?

Timmy Chandler, who is a defender, sometimes forgets to play defense and maybe even forgets he’s participating in a competitive soccer game. At the same time, Chandler scores goals like this:

In other words, Chandler is infuriating: an exceptional talent, especially when playing for his club team, who famously took his sweet time before fully committing to representing the Americans. He’ll spend an entire game looking like he’ll never be able to cross the ball effectively with his stronger right foot — only to suddenly turn around and blast a 25-yard rocket past a helpless goalkeeper. Who knows if he’ll see the field – presumably, he’s behind Yedlin at right back, and maybe also behind Evans — but anything could happen if he does.

Who’s the Young Guy to Watch?

With apologies to the precocious center-back duo of Ventura Alvarado and World Cup hero John Brooks, Gyasi Zardes gets the nod. The Los Angeles Galaxy attacker has played in all eight of the USMNT’s games in 2015, and he scored his first goal for the U.S. against the Netherlands last month. Better yet, the 23-year-old has adapted to the faster pace of international play more quickly than most players do and has improved in virtually every game. He’s big and strong — listed at 6-foot-2, 175 pounds — and has a knack for making smart runs and finding open spaces, a skill that’s reminiscent of his club teammate Robbie Keane, one of the best in the world at exploiting tiny crevices in and around the 18-yard box. Plus, Zardes dyes his hair blond so his grandparents can see him on television, which is just about the sweetest thing in the world.

Did Clint Dempsey Rip Up a Referee’s Notebook, Receive a Light Punishment, and Then Get Stripped of His Captaincy?

Can Carli Lloyd play for the USMNT?

No. But you should watch the Gold Cup anyway.

The Abyss Looks Back: The Darkness and Delight of Maria Sharapova