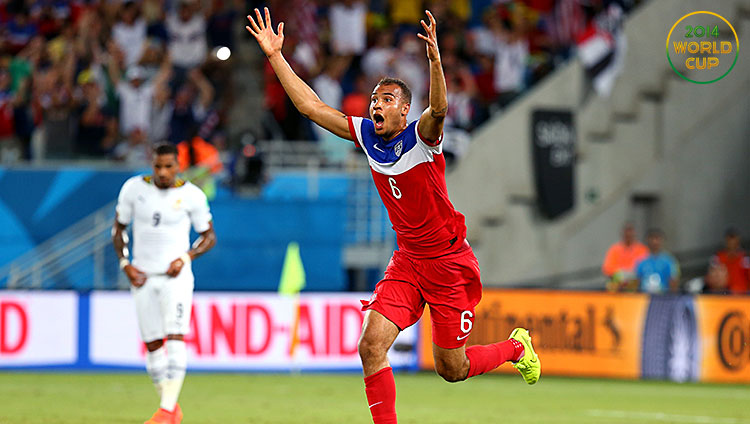 It’s been re-edited since, but at some point after John Anthony Brooks scored the winning goal against Ghana, the intro to his Wikipedia page read, “He is the greatest American since Abraham Lincoln.”

You may judge for yourself:

Over the past few months, Brooks has, by no fault of his own, been turned into a contentious symbol for the Jurgen Klinsmann era: young, German American, few past accomplishments, and a present we’re not quite so sure about either. For Brooks, the past is just more than a season’s worth of games for Hertha Berlin, a handful of not-that-great appearances for the U.S., and a brief dalliance with the German under-20 team. He eventually committed to playing for the U.S. last August — but he wasn’t tied to the team until he came on at the beginning of the second half in Natal.

While the German-born Brooks might just be the greatest center-back prospect America has ever had — super-clean defensively, 6-foot-4, loves having the ball at his feet, and sports a pretty rad pair of tattoos on his elbows — his place on the World Cup roster seemed to be down to Klinsmann having an eye on the future. After all, Clarence Goodson, he of more than 40 caps and a veteran of the 2010 World Cup squad, was right there. And when you’re picking a fourth center back, aren’t you talking “break only in case of emergency?” If you need someone to fill in because of injury or suspension, don’t you want a veteran you can rely on?

Well, it turns out Klinsmann doesn’t believe in fourth-choice center backs — he considers Brooks a backup to Matt Besler, and Omar Gonzalez the deputy to Kingston, Rhode Island’s One True King, Geoff Cameron. When Besler went down with a hamstring injury Monday, Brooks came on to, presumably, soil his compression shorts, help hoist Ghana over the American wall, and, depending on how much of a fatalist you are, single-handedly destroy dreams of a place in the knockout stages, setting this once great nation down a path of irreparable decay and state-level anarchy.

Instead, we got 45 minutes of that tantalizing future pulled back into the present: not one foul conceded, only one misplaced pass, clearance after clearance, a couple of blocked shots, a last-ditch tackle after a self-inflicted error just to keep things exciting, and one bald eagle of a header to grab three points.

“The best thing about the future,” Abraham Lincoln has been quoted as saying, “is that it comes one day at a time.” Whether or not those are the actual words of the foremost pre–John Brooks American, somewhere in Brazil, Klinsmann must’ve been thinking the same thing.