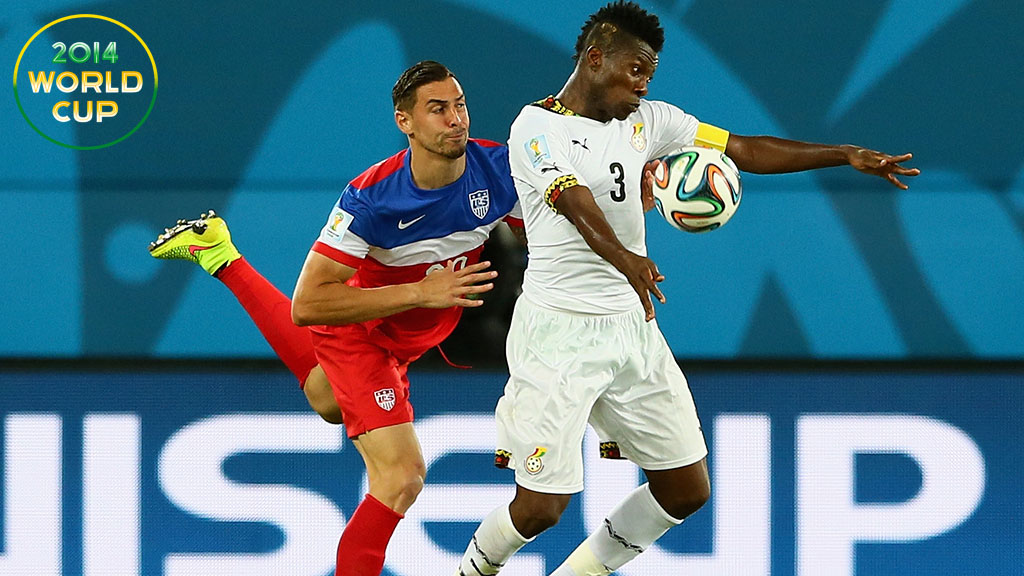 As exhilarating as Monday’s 2-1 World Cup victory was for United States supporters, it must have been equally as heartbreaking for Ghana supporters. Having clawed back to tie the match 1-1, and appearing to secure a minimum of a point after allowing a first-minute opener to Clint Dempsey, the Ghanaian team now face an uphill battle to qualify for the knockout stages of this World Cup. FiveThirtyEight suggests that Ghana’s loss dropped their chances of making it through Group G down to just 11.0 percent. (The United States, meanwhile, now have a 67.2 percent chance of advancing [the number has been updated since Nate Silver’s post yesterday].) Even worse, if Ghana are eliminated, it will likely bring the run of their golden generation to an end. It will take a while for a Ghanaian team this good to make it into the World Cup again.

You would forgive the Black Stars the feeling that the world is out to break their hearts. After comfortably handling the U.S. during the round of 16 in South Africa in 2010, Ghana’s proud run as the last African nation competing in the first World Cup on that continent came to an end at the hands — well, hand — of Uruguay’s Luis Suárez, who deliberately handballed on the line to keep out a goal at the end of extra time that would have sent Ghana through. Star striker Asamoah Gyan missed the ensuing penalty kick to end the match, and Uruguay promptly defeated Ghana on penalties to knock them out of a possible place in the semifinals in the cruelest possible fashion. Now, after having their hopes trampled upon just 29 seconds into the opening match by Clint Dempsey, a brave Ghana team battled back and had the better of things for the ensuing 80-plus minutes before equalizing and then almost immediately allowing the game-winning goal to American substitute John Brooks on a header off a corner. Even American supporters who have seen Ghana as their tormenters for the past eight years have to feel some sympathy for their African rivals.

The loss leaves Ghana perilously close to the exit door; it wouldn’t be wrong to suggest that the match against the United States was a must-win, especially after Germany’s 4-0 shellacking of Portugal earlier on Monday. Ghana will now need to regroup before facing mighty Germany on Saturday in Fortaleza, a match that all but requires them to get at least a draw to have any hopes of advancing. On Monday night, the Betfair market gave Ghana just a 16.7 percent chance of drawing Germany and an 8.9 percent shot at winning outright. If they can muster that point, they’ll then need to beat Portugal and hope that Germany lay waste to the United States.

The Americans have a much easier path to the final 16. While Portugal will undoubtedly be motivated on Sunday after being embarrassed by Germany, they will be without at least one and likely two star Real Madrid defenders. Center-back Pepe was sent off after headbutting Thomas Mueller during the Germany match; he can theoretically appeal, but it’s all but sure he will miss the U.S. game before possibly returning against Ghana. Fullback Fábio Coentrão, meanwhile, suffered a nasty groin injury that has his availability in severe question. Reports suggest that Coentrão and Besiktas striker Hugo Almeida will each miss a minimum of 10 days, which would keep them out for the World Cup. Furthermore, if Germany beats Ghana and confirms their qualification for the second round, they might very well choose to rest some of their players or rotate their side a bit in advance of the grueling knockout stage, which can only be to America’s benefit. The U.S. can get through with a point against Portugal and nothing against Germany; Ghana will need a point against Germany and a win against Portugal. It’s just a significantly tougher path for Ghana after this loss.

Barring a miracle, their defeat in the opening round of the World Cup will also send several Ghanaian heroes to the sideline. This golden generation of Ghanaian footballers emerged in 2001, when the U-20 team drew with France and beat Brazil en route to the finals of the FIFA World Youth Championship, where they lost to the hosts, Argentina. That team featured five players who would be capped 40 times or more for the senior side, and when Ghana made the World Cup for the first time in 2006, those five — Derek Boateng, Michael Essien, John Mensah, Sulley Muntari, and John Paintsil, all 24 or younger back then — were the heart of the side. Joined with slightly older veterans like Stephen Appiah (25) and promising young striker Gyan (20), Ghana were the youngest team in Germany, with an average age of just 25.2 years old. Four years later, with all of the above (short an injured Essien) back, they were once again successful in the World Cup and — thanks to an influx of talent from the team that won the U-20 World Cup the year before — the youngest team, averaging just 24.7 years of age.

That 2010 team left a number of star contributors on the field in South Africa after the heartbreaking loss to Uruguay. Boateng, Paintsil, and Mensah, the latter of whom served as the team’s captain in 2010, failed to make this year’s side. Appiah, the captain in 2006, retired in 2012. Essien, the country’s best footballer since the early-’90s heyday of Abedi Pele, lost his place at Chelsea because of injuries before moving to Real Madrid and then Milan as a backup; he sadly looked like a shell of his former self while coming off the bench for Ghana on Monday. Muntari struggled to make an impact on the match and could have been sent off for a clash with Jermaine Jones.

More distressingly, the young players of the 2010 side have mostly failed to develop into the world-beaters they once seemed poised to become. Many have taken steps backward since 2010, perhaps none further — or more disappointingly — than Gyan. The often-spectacular striker signed with Sunderland after the World Cup for a club record £13 million, but after a promising first season, Gyan forced through a loan move to Emirati side Al-Ain, which paid Sunderland £6 million for one season and dramatically increased the Ghanaian striker’s wages in the process. The move was made permanent a year later, and while Gyan has played well in the UAE, it’s hard to imagine that a striker in the prime of his career is best served playing in front of tiny crowds in Abu Dhabi.

Here are the 25-and-under players who suited up for Ghana’s 2010 World Cup team, where they were at the time, and where they are in 2014:

If anything, some of these transfers undersell how disappointing the young Black Stars have been as professionals. Annan has barely played at Schalke and spent most of his time on loan at Vitesse and Osasuna. Owusu-Abeyie, who was on the youth books at Ajax and Arsenal, had bounced around a number of big clubs before moving to Qatar just before the tournament; he appears to be out of football. Vorsah, linked to Liverpool in 2010 and Fulham in 2012, ruptured his knee ligaments last season in Austria and appears to have missed his window.

The most promising prospect of all was Adiyiah, who won the Golden Shoe and tournament MVP awards during that 2009 U-20 World Cup before signing with Italian powerhouse Milan months after. It was his header that Suárez cleared off the line in Johannesburg. It’s sadly been all downhill since that moment. The 20-year-old Adiyiah missed a penalty during the ensuing shootout, never made the grade with Milan, and found his way to Ukraine’s Arsenal Kyiv before signing to play in Kazakhstan this past season.

Just five of these 15 young players have made the 2014 team, and the only ones who are clearly in a better place now than they were in 2010 are Lee Addy, Kevin-Prince Boateng, and Kwadwo Asamoah. The golden generation has given way to the wasteful generation. In 2018, Essien (who will then be 35) and Muntari (33) will likely be on the sideline. Gyan will be 32, albeit a very rich 32. His future availability and effectiveness are up in the air. The core of the team will be Asamoah (29) and brothers Andre and Jordan Ayew (28 and 26 in 2018, respectively), but even the latter Ayew brother has stagnated, as he spent 2013-14 on loan at Sochaux. That doesn’t quite appear to be a lineup of players the same caliber as the prime Essien-Appiah teams.

The silver lining for Ghana? They have another crop of young talent coming through. For the third straight tournament, Ghana have the youngest team by average age of the 32 sides in the World Cup, at just 25.5 years old; their starting 11 on Monday was right at that figure, at 25.4. Even if Ghana doesn’t have another Essien in the ranks, they can make it back to Russia in 2018 if the likes of 22-year-old Chelsea winger Christian Atsu, 23-year-old Porto right back Daniel Opare, and 22-year-old Spartak Moscow striker Majeed Waris develop into useful starters for both club and country. But as we can see, Ghana does not have a great track record of capitalizing on the potential offered by young players. Ghana’s hopes of advancing in 2014 have suffered a serious hit, and the familiar core of players who tormented the United States are on their way out. For the Black Stars, a murky, uncertain future is rapidly approaching.