The Abyss Looks Back: The Darkness and Delight of Maria Sharapova 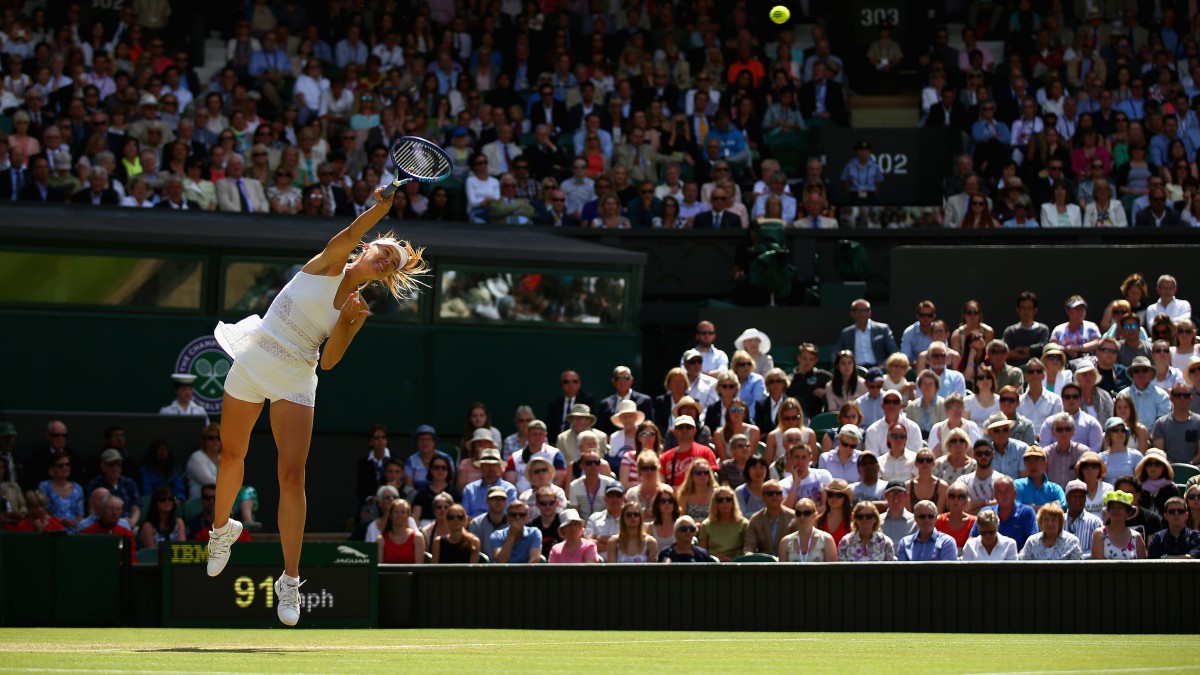 Maria Sharapova has a stare these days that has seen past the far end of midnight. She has looked into gray distance and come back changed, with a touch of gray distance in her eyes. For the most professionally glamorous player in women’s tennis — the most marketable, the best paid, the most likely to be found whirling toward a camera in mid-smolder — her on-court mien is … well, it’s grim enough that you want to use the word “mien” to describe it. She’s like someone who dies on a castle wall in Tolkien. Maria of Nyagan, who went alone to her doom though the city was already lost. The abyss has cautionary sayings about gazing into her.

In her quarterfinal match this afternoon against the 23-year-old American Coco Vandeweghe, Sharapova’s lethal bleakness was on full display. Vandeweghe, a sparkling terrier of a player who harrassed Sharapova through three tough sets on Centre Court, spent about half the match grinning. She flapped her arms for the crowd. She chortled after points. She urged herself on with a relentless, upbeat tenacity. Sharapova, meanwhile, seemed to gather herself into some grand kimono of gloom. Bouncing the ball before a serve, she glared into near space like someone about to lash out at fate itself. When she wasn’t shrieking along with her groundstrokes, she was wreathed in silence. She won 73 percent of her first-serve points and took the match, 6-3, 6-7(3), 6-2.

There’s something fascinating about Sharapova right now. She’s still one of the best players in the world. She’ll move up to no. 2 after Wimbledon, in fact, regardless of what happens during the rest of the tournament. But to fans, analysts, and the zeitgeist, she’s become a weird sort of ghost. She’s radiantly famous, forever a threat, and yet — who thinks about her? And why should we, since we know she can’t beat Serena? Sharapova hasn’t won a match against the world’s best player since she was 17 years old and the glossy–magazine-ready future of women’s tennis. That’s a span of nearly 11 years, covering 16 matches. She hasn’t exactly failed to deliver on her promise; she’s won five majors, including two of the last four French Opens. She owns a career Grand Slam. But she’s been so absolutely incapable of challenging her era’s defining player that it’s easy, even natural, to treat her as an afterthought.

And so it makes sense, in a way, that she’s transformed herself into a mirthless warrior. When your main rival can always outdazzle you, what’s left to do but keep plugging away? Winning Wimbledon made her a star in 2004. These days, though, she’s virtually a clay-court specialist, and the contrast between her semimobile power-baseline game and Vandeweghe’s net-charging aggression made their quarterfinal a strange study in alternate futures. Here, if you squinted your eyes a little, was the player Sharapova might have become 11 years ago: loose, fearless, a little cocky, self-consciously delightful. Vandeweghe’s backhand sweeps through an incredible arc of space in a snapped second. “I try to have a good time out there on the court,” she’s said, “or at least fake it enough to where it looks like I’m having a good time.” But Sharapova wasn’t out to have a good time and wasn’t there to fake it. Instead, she slugged mercilessly from deep while Coco scrambled forward, trying to clip the angles of the American’s groundstrokes.

Vandeweghe put up flashier stats — 32 winners to 20, 23 attempts at net to eight — and soaked up most of the commentators’ and the crowd’s attention. But Sharapova knows how to smother a match. She converted six of 11 break points, compared to Vandeweghe’s three of 14. Her serve deserted her at times (when doesn’t it?) but came through when it counted. She stayed, if not exactly cool, then at least kind of starrily self-possessed. And during every rally, on every shot, she screamed that slasher-movie scream she has, the one where you can’t quite tell whether she’s the killer or the victim.

It’s hard for me to side with fatalistic determination over flash and fun and dazzle. I’d rather watch Nick Kyrgios, always and forever, than whatever cyborg of humility and respect for cricket Kyrgios’s critics wish he’d morph into. I’ve been thinking about confidence lately, though, about the types and stages of it, about adult confidence versus childhood confidence, about which sorts of confidence I’d like to have more of and of which I could stand to have less. The confidence of athletes often strikes me as useless in the setting of real life. It’s easy and artificial, enabled and maintained by people with a stake in maintaining it. It comes from having your life streamlined, from keeping within routines that are effective in the context of sports but infantilizing outside it.

I love watchingVandeweghe, and I’m excited to see the player she’ll become. But her confidence, I think, is a little like that — basically youthful, the product of a life in which suffering has always been stage-managed into a lesson, in which real fear has been kept carefully away. Sharapova’s confidence feels harder-won. It has uncertainty in it. That stare knows some unanswerable questions. Vandeweghe’s confidence might eventually be better on the tennis court. But in a crisis? As the basis of a life? When I see Sharapova these days, I tell myself I’m watching something deeper and stranger than tennis. She’ll play Serena next, in the semifinals. Another hopeless struggle. But no matter who she’s playing, what she’s fighting always feels bigger than she is. She keeps fighting.

'The Lowe Post' Podcast: Kevin Arnovitz on DeAndre Jordan, the Spurs, and More