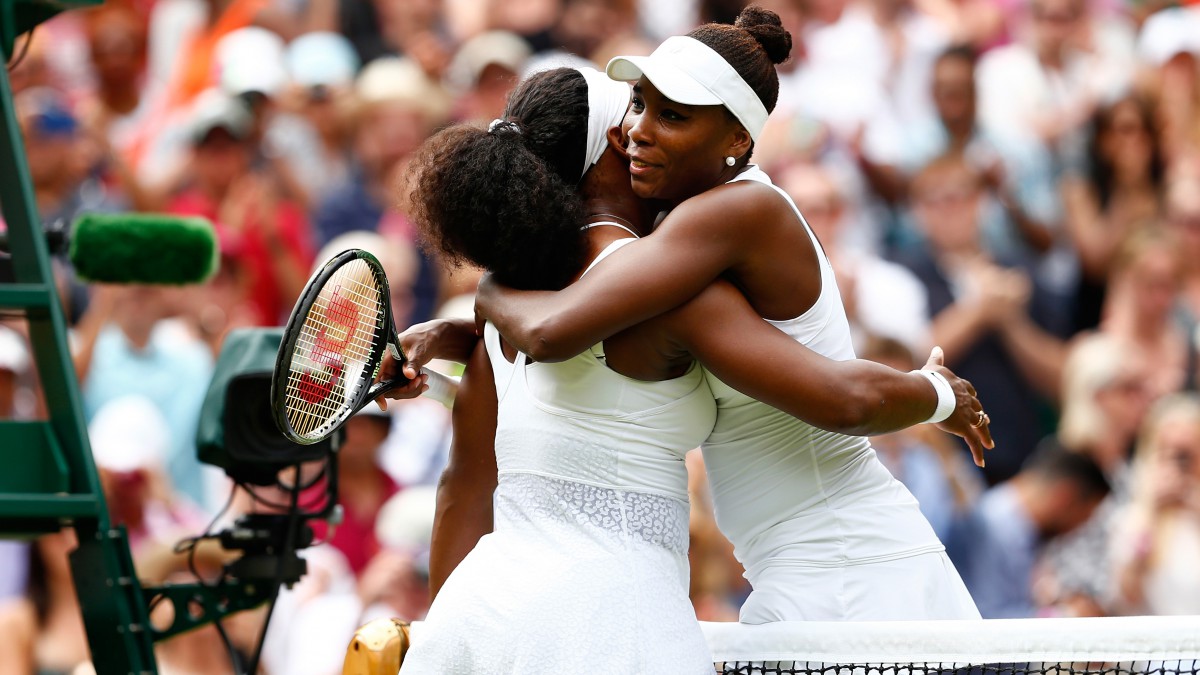 Every time a great player hits a ball, she marks it as her own. This is not intentional; it’s not even a question of style. It’s something more elemental, more like a fingerprint than a signature. It has to do with the angle of her hips, the height of her backswing, the distortions from her tics. It’s the sum of the thousands and thousands of forehands she hit as a child. If you could decode every unconscious, reflexive movement, it would tell you something about how she became the player she is.

When Venus and Serena Williams faced each other in the fourth round this morning, in the first match of the day on Centre Court, the seats were only half full. The applause that greeted their entrance had a certain politely distant note. This might have had something to do with the tournament’s peculiar relationship to its two greatest active champions — there were, after all, 10 Wimbledon singles titles represented on that court — but I suspect it had more to do with the players’ peculiar relationship to each other. There is something uncomfortable, almost cruel, almost impossible about watching siblings face each other. Whatever else was happening on the court — Serena’s pursuit of all-time greatness; Venus’s remarkable story; the bad luck of the draw that set this matchup too early — there was, on some level, an impenetrable zone around them, layers upon layers of familiarity that annealed into something intimate and impenetrable.

Then they began to warm up, and the crowd’s distance turned to distraction. People took their seats, discussed Andy Murray, unwrapped their neatly packed, tinfoiled sandwiches. Venus and Serena hit easy rallies with loose, unhurried strokes. Thwock, thwock, thwock. And in that quiet, unimportant moment, I could see their relation in a way I hadn’t before — in the compact thrust of the backswings of their backhands, in the pigeony angles of their toes. The stories of their strokes were the stories of each other — of the millions of balls they had batted back and forth. They’ve been doing it, together, for nearly 30 years.

But their story is also a story about divergence. Venus is the oldest player in the draw. She has been battling an autoimmune disorder for years. She remains a threat at Wimbledon, has made her way back into the top 20, and had been the better of the two Williamses in the tournament thus far — as Serena admitted after nearly losing to Heather Watson on Friday — but it was hard to imagine she had much of a chance. It was true that Venus had defeated Serena the last time they played. But Serena doesn’t take lightly to losing. She has the career record for majors and the calendar slam in her sights, and if she had to embarrass her sister to get there, she would. Serena won the first eight points.

Serena would go on to win the match in a straightforward manner, 6-4, 6-3, but gave her sister the greatest sign of respect: She played nearly flawlessly. Serena hit 36 winners to Venus’s 15, and she looked more focused and determined from start to finish than she has in months. The result turned, as it usually does, on the serve. Serena’s second serve was an average of 11 mph faster than her sister’s, and she punished Venus with her return while Venus struggled with hers. Their groundstrokes were quick and flat and sharp; the vast majority of their points ended in fewer than five shots.

You can use numbers to describe them all day long. Here are a few more: They’ve played each other 26 times on tour, and thousands of times before. They have more than $100 million in prize money between them, 27 majors, more than 100 career titles, nearly 1,400 matches won. But that’s not what you see when you watch them together. What I’ll remember is the distinctive simplicity of their backhands, the familiarity of their form, the echoing thunder of their shots. They wouldn’t be where they are without each other. Every ball they hit will tell you this. It’s in the DNA of their strokes.

Praise the Lloyd: Carli and Team USA Put on a Show in Vancouver