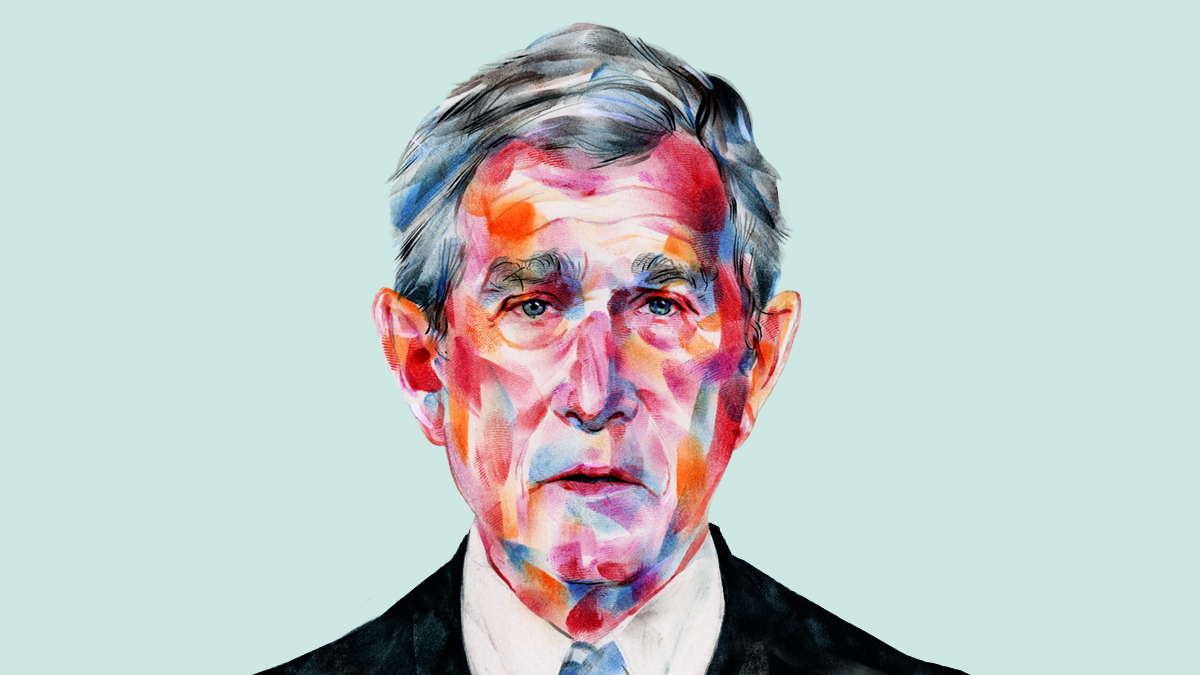 President George W. Bush stood on the mound at Yankee Stadium on October 30, 2001, before Game 3 of the World Series, anxious. The ball was heavy in his hand. “Standing on the mound at Yankee Stadium was by far the most nervous moment of my presidency,” he says in the new 30 for 30 short First Pitch. On a hazy morning in early September this year, he sat in his spacious office in Dallas with his feet on his desk and said it again. “It’s the one in which I was most nervous.”

As president, he would govern a nation divided by a disputed election. He would sit in front of a room of schoolchildren and hear an aide whisper in his ear that buildings were burning as terrorists mounted a massive attack. He would go to war in Afghanistan; he would go to war with Iraq. A natural disaster that hit New Orleans would become a domestic catastrophe. An economic crisis would grip the nation. And he would hear, every morning, a report of the ways in which the country was in danger. The threats were real. “I got to see them,” he reminded me. “You didn’t.”

He was most nervous at a baseball game?

“Your adrenaline isn’t surging during decisions,” he said, leaning back, looking out the long windows toward downtown Dallas, an island of skyscrapers rising from a green sea of trees. “Decisions were very deliberate. I listened to a lot of good people, and when I made up my mind, I made up my mind. And I feel good about making those decisions based upon what I thought was in the best interest of the country.” There were times of stress, he insisted, but there was nothing like that moment in Yankee Stadium.

While Bush warmed up, Derek Jeter had tried to “lighten the mood” by ribbing him that if he botched the pitch, the crowd would boo. But to Bush it wasn’t a joke. “I didn’t want to bounce it,” he said emphatically. It really mattered whether he threw a strike. It mattered, because in his view, he stood on the mound in a Manichaean world.

Even by the president’s standards, October 30, 2001, had been busy. There were conference calls with the presidents of Armenia and Azerbaijan, CIA and FBI and NSC briefings and meetings. There were meetings about aviation security and his effort to overhaul Social Security; a trip to a Maryland high school; conversations with Secretary of Defense Donald Rumsfeld, his counsel Alberto Gonzales, Assistant for National Security Affairs Condoleezza Rice, senior adviser Karl Rove. And finally, Bush boarded the flight to New York. Bush is not by nature introspective,1 and besides, he said, “when you’re busy like that, you don’t have time to reflect on the moment.” But as Air Force One flew by the World Trade Center wreckage on the way into JFK airport that evening, and then as Marine One moved through the black Bronx sky toward a park next to Yankee Stadium, he took rare time to think about what had happened and what was to come.

He thought about Ground Zero, he said, and his first trip to New York after 9/11, three days after the attacks. Then, he had stood on top of the shell of a twisted, burned-out fire truck in a mound of still-smoking rubble and spoken. Someone had handed him a bullhorn, and then someone had shouted, “We can’t hear you!” “I can hear you,” he yelled in response. “The rest of the world hears you. And the people who knocked these buildings down will hear all of us soon!” That’s the iconic image of him; that’s the moment people remember.

“That was all just emotion and reaction,” he told me. “I was surfing off the emotions of the people.”

And then he thought about the pitch itself. He thought about the other time he’d thrown a first pitch as president, at a Brewers game. He’d put it in the dirt. His dad had bounced it when he was president too. Both he and his dad had played baseball at Yale — the senior Bush was team captain, the younger never made varsity. And bouncing it had been mortifying. “We’re pretty competitive people,” he said.

He hadn’t had much time to prepare, squeezing in a game of catch with his press secretary, Ari Fleischer, in the South Lawn to loosen up. So he knew he faced the prospect of embarrassment in front of a stadium of people who hadn’t voted for him, and more.

As he walked out to the mound, wearing an FDNY pullover over a flak jacket, as the voice of Bob Sheppard — “Ladies and gentlemen” — faded into the great sound of the crowd, he had a sense that something more was at stake than pride.

It wasn’t just a pitch to him. He talked about it as an act of healing and an act of aggression. He didn’t allow for the distinction. “I can’t remember thinking, If you don’t bounce it, that’ll lift their spirits,” he said. “But I probably knew, instinctively, that a bounce would kind of reduce the defiance — the act of defiance toward the enemy.”

As Bush gave a thumbs-up to the crowd with his right hand, he held the ball in his left.

It mattered that it was a baseball. If he had been flipping a coin at a football game, as he would on September 11, 2011, when the Jets played the Cowboys, it would have been different. “Flipping the coin, you’re with people wearing huge pads and giant people and referees and cameras. There’s a scrum,” he said.

“On the baseball mound, you’re alone.”

Baseball was so much a part of his life — games as a kid in Midland and at school, a love of Willie Mays, a lifetime of fandom, a lucrative stint as a general partner of the Texas Rangers. He loved baseball. There was always something happening, however quiet. He even liked to watch the pitchers warming up, the infielders throwing around. It had about it a sense of history, the national pastime. Baseball represented “normalcy” — the pace of play, the size of the players, the old and abiding appeal of tradition. “It’s got a palliative effect on the national soul,” he said — before quickly adding, “I waxed too poetic there.”

Normalcy. After 9/11, he urged people to go shopping, to go to Disney World, to play baseball. “I made the case that, if you really wanted to send a message to the terrorists, get back to normal life and we’ll do the best we can to protect you,” he said. “And so going to a baseball game was kind of symbolic of getting back to normal life.”

But of course normal life was changing. There were signs of it everywhere, not just in the wreckage of downtown New York and in a scorched field in rural Pennsylvania and in the broken walls of the Pentagon. There were machine guns and bomb-sniffing dogs and reports of suspicious activity in small towns. Normal was guarded by metal detectors now. You could see the new reality right there, at Yankee Stadium, in the security screening of ticket holders, a process so extensive that hundreds still waited in lines outside the stadium as the game began. You could see it, too, though you wouldn’t know it, on the field, where one of the umpires was a Secret Service agent in disguise. And you could feel it. The mood of the country was still fearful. Anthrax attacks, now largely forgotten, were killing people. There was intelligence chatter about more — and worse — terror. The country was on high alert.

President Bush moved the ball to his right hand, quickly wound up, and threw.

I wanted to know whether he took any lessons from that moment in Yankee Stadium — from the symbolic power of that strike and the deafening chants of U-S-A that followed. “The lesson is, for all politicians, say what you mean and act on your convictions,” he answered. “Don’t waffle. I mean, I don’t see how you can lead if you don’t know where you’re leading, and you don’t have clear goals — and you make as best a decision as you can make. You’re going to get criticized, and that’s life.”

Fourteen years later, President Bush can wear red-soled sneakers with his navy blazer to his large, spare office. A pristine bag of golf clubs stands right outside his office, next to a white Texas Rangers jersey hanging from a doorknob. Large black-framed photographs of his family and from his presidency line the walls. He spends much of his time these days painting, in a skillful modern impressionist style — portraits, cats, a lamb in psychedelic wavy grass. He seems relaxed; he still has his edgy charm. “You’re fit,” he said when he met me, and asked jokingly whether I’d run a marathon that morning.

That weekend, First Pitch had premiered in Dallas. I asked him if he’d been surprised by any of the reactions in the audience. “This is pretty much a home-cooked crowd,” he answered. “These are people — well, these are people that — when people say my name in certain places, it evokes a lot of emotion, some positive, some negative. This movie transcends politics. It really harkens back to a moment when the country was united and was recovering. … A lot of people tend to want to forget those emotional moments, which then obscures the lessons of 9/11.”

For some, memories were fading. Others were too young to remember at all. The way he described it sheds light on his understanding of American history, American exceptionalism, and American prerogatives in the present day. “There’s a whole bunch of people in America now, and there’s going to be obviously a lot more as time goes on, that view 9/11 like Pearl Harbor, as a moment and a paragraph in a history book,” he went on. “But the problem is that the evil is still real. And so this movie — to the extent that it reminds people about kind of the realities of the world in which we live —  is important.”

And what did he think those lessons of 9/11 were? I wanted to know.

“There are two lessons: One, evil is real. Murdering innocent people to achieve a political objective is evil,” he said. “And secondly, how others live matters to our security — how others live elsewhere,” he interrupted himself, and quickly wound up the conversation. “All right, good. Go run a marathon.”