Flavia of the Month: On Pennetta’s Surprising U.S. Open Victory 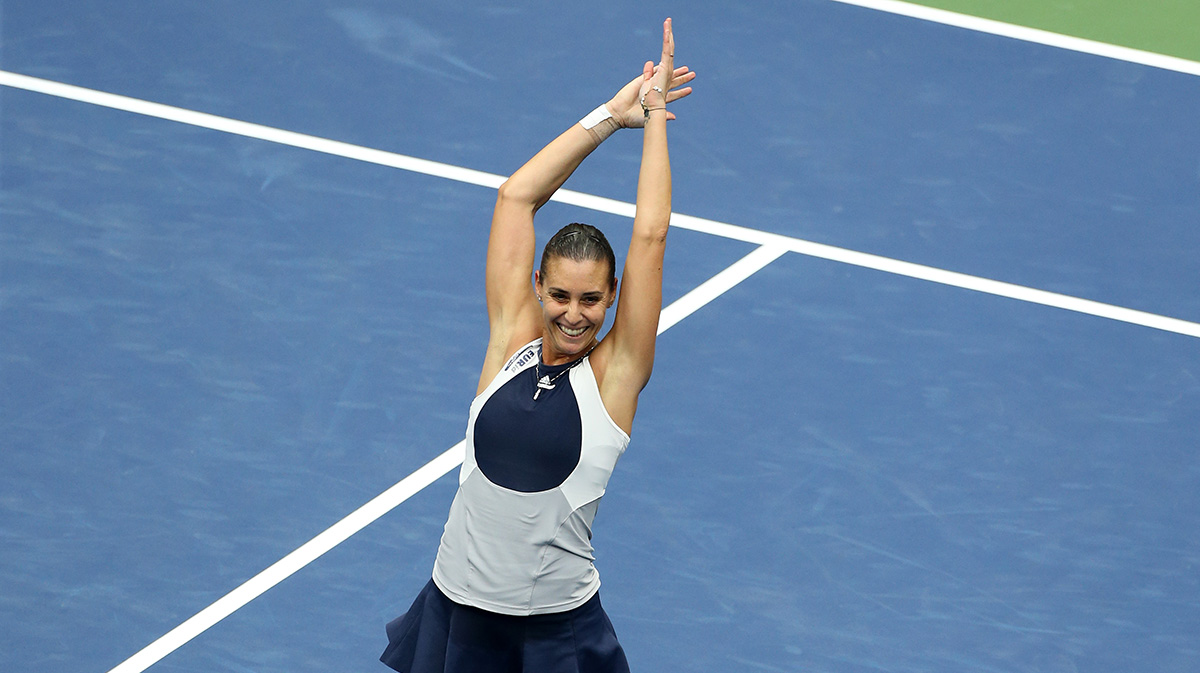 The story of the U.S. Open, of course, was Serena. It didn’t matter that she had struggled in matches all year, that she had come close to losing so many times. It didn’t matter, either, that she tried to distance herself from the narrative we imposed on her. She didn’t need this for herself. We needed this for her. The arc of the story was too powerful. The making of history, the recognition of greatness, the inevitability — it was commanding, consuming. So we bought our tickets early.1 We trusted the speed of her serve, her fist pumps, her screams. It’s often that way, isn’t it? We live through the lives of others. They let us feel anger and desire; they let us hope and dream. And when the plot had a twist, we were left with disbelief.

The real story, her story, was always going to be something different than the story we wrote for her. The weight she carried, in the end, was perhaps too much. The pressure, the expectations. She was the agent of so many intense hopes, the subject of so much suspicion and hate, the repository of so many dreams. And she faced a woman on the other side of the net with a versatile, unpredictable game, a low slice, and a go-for-lucky swing. Serena is human. Her feet got tangled; her shots hooked wide.

While Serena was on the court, playing Roberta Vinci, Flavia Pennetta was in the press conference room, talking about her win over Simona Halep. “Of course I’m really happy … But I am still the same player,” she said, and then went on. “Sometimes I have a bad moment like everyone. I mean, I’m a tennis player, but I’m also person. So I think everyone has — the moon, is going up and down, no?”

The moon went up and down. And the next day, the cloudy sky grew light. There was more tennis to play, and then still more to do and more to say.

As a match, the women’s final was forgettable. Most people, probably, forgot it before it even began. The contest had its moments. There were creative defensive battles, Vinci’s slice backhand against Pennetta’s stinging two-hander, drop shots, half-volleys, and, from Pennetta, one particularly pretty little lob. But, especially at the start, the match appeared to be what it was: a struggle between two good players who knew each other a little too well. The flowing magic of the previous day’s upsets was gone. Pennetta was tight, hitting up the middle; Vinci had lost some of her daring. The first set lasted an hour and went to a tiebreak, which Vinci lost with four loose errors. In the second set, as the match wore on, the better player became stronger, and Pennetta’s backhand began to blister the court. There wasn’t much suspense; Pennetta won the second set 6-2.

If that were all, it would have been little more than a sad footnote to the final that never happened. Instead, as the rain began, there was a sense of joy. The winner and loser jogged to the net and hugged, and the hug was good and long.

Roberta Vinci had known the story. She had booked her ticket back to Italy for after the semifinal, assuming she would lose. She was 32 years old, ranked no. 43 in the world, best known for her success in doubles. So far this year, she hadn’t made it past the second round of a Slam. Until she faced Serena, her path through the U.S. Open had been ridiculously easy: She’d defeated the 414th-ranked player, the 77th (in three sets), the 96th (in three), and the 40th (in three). Her toughest opponent, Eugenie Bouchard, had withdrawn from their fourth-round match when she slipped in the locker room and suffered a concussion. Then came the “miracle” — and with the biggest upset in women’s tennis history came the winning sense of humor and the miraculous smile. 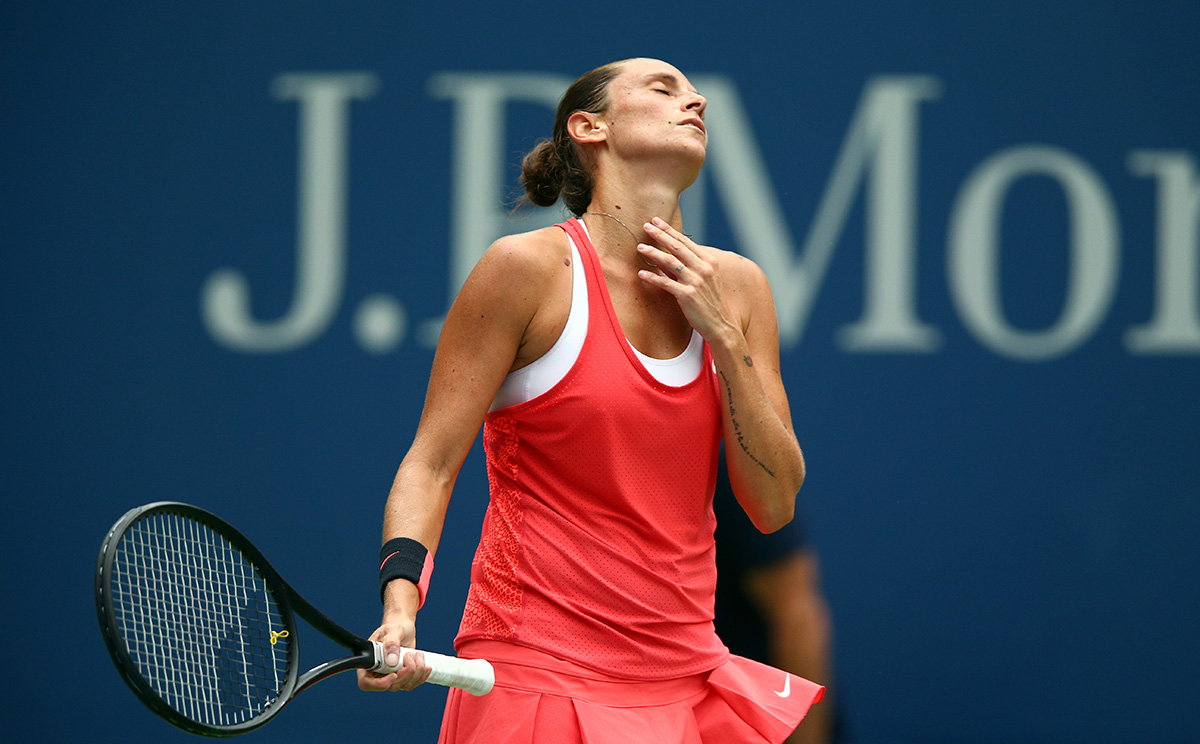 The final was a winnable match for Vinci. She had played Pennetta nine times, winning four; they had played countless more matches outside of the tour. They’d first faced each other as preteens, in Pennetta’s hometown of Brindisi. They’d roomed together for years. But to see Vinci’s happiness, you could not have guessed that it mattered; you could not have guessed that she had lost. And this was another kind of story, as irresistible in its own way as any other: the inspired winner who becomes the delighted loser. Vinci had a winsome way of embracing the moment. Here we are! every flash of her smile and flick of her fingers seemed to say. It’s amazing!

And as she talked and joked with her friend, it was clear that Pennetta felt the same way. “Of course you want to win, but you gonna hug her if she gonna win,” Pennetta had said before the match. “It’s amazing. Doesn’t matter.”

Afterward, as they sat in chairs waiting for the trophy ceremony to begin, Pennetta leaned over and whispered something into Vinci’s ear. What she told her was that her story was going to change.

Pennetta had talked about retirement before the match, at her press conference after her semifinal win. She had been thinking about it for years. She loved tennis, which helped — loved even what many don’t: the constant travel, the hours and hours of practicing. But lately, she said, she’d had trouble finding the power to compete.

She was 33 years old. She’d had a good career, with solid results. She’d won a big title (Indian Wells, last year); she’d made nearly $14 million in prize money. And tennis, she said, was not only what she loved. It was all she had known. “I mean, I don’t see myself without tennis. It’s not easy for a player to I think take this decision and say, It’s over,” she said.

Tennis had been the only story. “It’s something I did since I was young, so I don’t know what else I can do. I don’t know what I like. This is the point. I mean, I don’t have time to know if I like something more. I have to discover everything. It’s like a new life completely.”

In her old life, she had accustomed herself to losing. And then, suddenly and unexpectedly, she had won. And with that, she announced that she was leaving tennis. She was done.2

“You lose so many things when you are young,” she said afterward. “With this, winning today, my life is perfect. I cannot say something different. Perfect.”

But even as she embraced the perfect moment, she let it go. “Sometimes it is the more scary thing, no?” she had said before the match. “Because the life, it’s gonna change, but most of the time it changes better. I hope so.”

It’s tempting to say Pennetta left the game as a winner, but the truth is that the moon goes up and down. She is neither a winner nor a loser. She is just herself.

Time After Time: A Look at Week 1 in the NFL