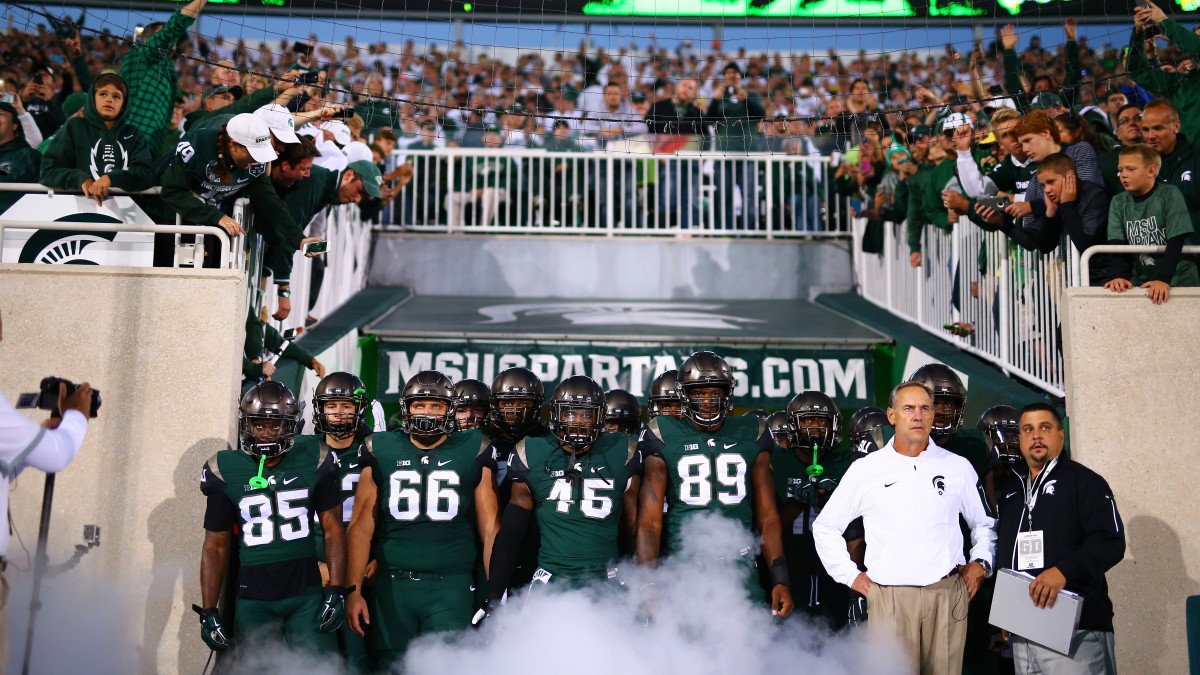 Just as Week 1 of the 2015 season generated more entertainment value than its schedule seemed prepared to produce, so, too, did Week 2 underpromise and overdeliver. Man, did this weekend have some weird, dusty oil lamps stashed in its crawl space, and the only way to find out which ones might be haunted is to rub each one in turn! Below, a helpful list of story lines you need to take away from this week — ranging from selected highlights of Saturday’s action to developing plot threads with the potential to affect the playoff.

1. As a nation, we’re probably done overlooking Michigan State. Laid low after a lackluster second half in Eugene last season, the Spartans went back to East Lansing and set to work assembling an on-field CV that would eventually make them Cotton Bowl victors. Heading into 2015, with Ohio State and Michigan sucking up all the Big Ten bandwidth — and with a schedule that won’t see them on the national radar again until mid-October — the Oregon matchup was going to be a statement game for MSU one way or another. Mark Dantonio’s merry men responded with something perhaps more important than perfect football: composure. This wasn’t a tidy game, but the Spartans rebounded admirably from big Ducks plays and from their own miscues to record their fifth win in six chances against top-10 teams. Barrel-roll to your little heart’s content, LJ Scott:

MSU should find considerably more accommodating opponents in this next stretch of schedule, and it will need to make good use of that prep time: The Spartans’ three most significant remaining games in the regular season — Michigan, Nebraska, and Ohio State — are all road trips.

"I watch those Fast and the Furious movies every once in a while, and this game reminded me of that." – @DantonioMark pic.twitter.com/TaEuPkQrXM

2. Notre Dame has survived its first of who knows how many haintings. One of the most startling moments of the preseason was realizing that recent Fighting Irish teams are underrated about as often as they’ve been overrated. If you’re at all familiar with ND’s history of ungainly falls out of the polls and aerobic climbs from the ranks of the also-rans, the cloud of what looked like well-earned summer hype was a surefire portent of weird fortunes to come.

The gods, so far, have been most unkind. And yet after a couple of brutally early season–ending defensive injuries, one torn ACL for 2014 leading rusher Tarean Folston, and one broken ankle for starting quarterback Malik Zaire, the Irish are 2-0, thanks to a last-minute touchdown throw from backup quarterback DeShone Kizer.

It’s just one game, but it’s one more win — and an all-important one, with Georgia Tech coming to South Bend this Saturday. All you can do is survive whatever’s next, Irish. Burn some sage in those dorms, wrap everybody’s limbs in protective silicone, and godspeed.

That moment when your team gives up a touchdown with 12 seconds left. #NDvsUVA pic.twitter.com/64zH6dmXf3

You speak for so many of us this week, Limp UVa. Enthusiast.

3. What we said about Notre Dame goes double for BYU. The Cougars will see your game-winning scoring pass from a redshirt quarterback and raise you a pair of Hail Marys by a backup freshman quarterback in consecutive weeks. Tanner Mangum — last seen coming off the bench (following a season-ending injury to Taysom Hill) to edge out Nebraska on a fourth-down end zone heave — threw a fourth-quarter, go-ahead touchdown against Boise State, which BYU safety Kai Nacua followed immediately with a game-icing pick-six. You wonder what the Cougars would have to do to not catch a break; they certainly tempt the fates more than superstition would deem strictly advisable.

4. Dalvin Cook can run FSU out of trouble … for now. Imagine being able to drag your collegiate carcass to the stadium for a prenoon kickoff this early in the season. Now imagine you’re Dalvin Cook, and you show up and shed a horse-collar tackle here, a burly blocker there, and then run for 266 yards against South Florida by yourself, all highlighted by a 74-yard scoring scramble:

A one-facet offense is not a sustainable solution for the Seminoles — Everett Golson rang up 163 yards and a 53.8 completion percentage, woof — but it’s sturdy enough to build on, so far.

5. #MACtion is #backtion. It feels like a minute since we’ve had a MAC team to really rally around, doesn’t it? Many a Tuesday night has passed yearning for an ever-extending Ohio winning streak or a Jordan Lynch–captained NIU squad to capture the hearts of a nation, but don’t look now: There might just be a bumper crop of auxiliary rooting interests sprouting up north.

For the second consecutive week, brave bands of profiteroles set out to prove they’re made of more than pâte à choux, with a pair of purely delicious results to show for their troubles. A power-mad Bowling Green team, smarting from a Week 1 loss to Tennessee that was closer than it looked, stomped into College Park and laid waste to Maryland, recording six touchdown passes and four forced turnovers and setting up an absolute must-see matchup with Memphis next week. And down in Little Rock, a Toledo team descended for a slugfest upset of Arkansas, whose coach made headlines this past week for criticizing Ohio State’s strength of schedule. This section will now end to allow you ample time to draw your own conclusions.

6. The American is developing a personality. The defining feature of the former Big East has been its indeterminate character. The post-2013 realignment has been distinguished, in its first few years of existence, by the aphorism that if you can’t remember which conference a given team is in, there’s a high probability it belongs in the AAC.

Enter Temple. The Owls made a delightfully profane early statement in Week 1 by knocking off Penn State for the first time since 1941 — and followed that up Saturday with their first win over Cincinnati since 1985. They were joined this week in their anti–Power 5 uprising by the Houston Cougars, who went into Louisville and put Bobby Petrino’s team down at 0-2. Between these two, Memphis, and whatever madness Chad Morris is brewing at SMU (to say nothing of the Keenan Reynolds record-book watch at Navy), there’s much to love about the league whose membership you still haven’t quite memorized.

7. Baker Mayfield is going to make many defenders look very silly. Not to discount the combined efforts of wide receiver Sterling Shepard and the Oklahoma defense in general, but the defining memory of the Sooners’ double-overtime victory at Tennessee is countless orange-jerseyed players landing flat on their faces on the turf after trying to get a piece of OU’s starting quarterback.

Mayfield’s lower-body fluidity has been well documented this summer.

8. Robert Nkemdiche is changing the way we think about Fat Guy Touchdowns. You remember that one chilling moment in that third Alien sequel, the one where Ripley breathes, “She’ll breed. You’ll die”? The beauty of Fat Guy Touchdowns has so long depended upon the element of surprise, the serendipity of “310 pounds of glory” — but in Oxford there’s something more diabolical in the works. For the second week in a row, 6-foot-4, 296-pound defensive tackle Robert Nkemdiche, who is decidedly not fat, has scored a touchdown after lining up on offense. Ole Miss isn’t the first team to draw up plays for a designated wrecking ball, but there’s a deliberateness about this campaign, a craftsmanship that suggests this little crusade for big men is headed to the mainstream. It’s genuinely heartwarming.

9. Les stays blessed. You say “Dak Prescott and pals should’ve kept their heads about them to avoid this delay-of-game penalty,” and the universe answers, “But what would that have done to counter the amethyst-encrusted horseshoe plucked from the ruins of a Babylonian temple that Les Miles keeps tucked up under his signature hat?”

10. Boston College is a team of heroes. All right, that’s it. It’s not cute anymore. Bully for BC for standing up against the tyranny of these FCS teams that think they can take six-figure checks, show up for a game day, and have the gall to try to win. There were higher final tallies on Saturday, but no headier first quarters than the Eagles’ against Howard, which featured SIX first-period scores, five of them offensive. Without this standard-bearing performance, who knows if Auburn would’ve been able to summon the will to surmount mighty Jacksonville State, or Arizona State the gumption to get past Cal Poly?

To be fair, Cal Poly is literally "many californias." hard to beat a bunch of that state.

Flavia of the Month: On Pennetta’s Surprising U.S. Open Victory