College Sweethearts: For Baylor and Michigan State, It’s Not Easy Being Green 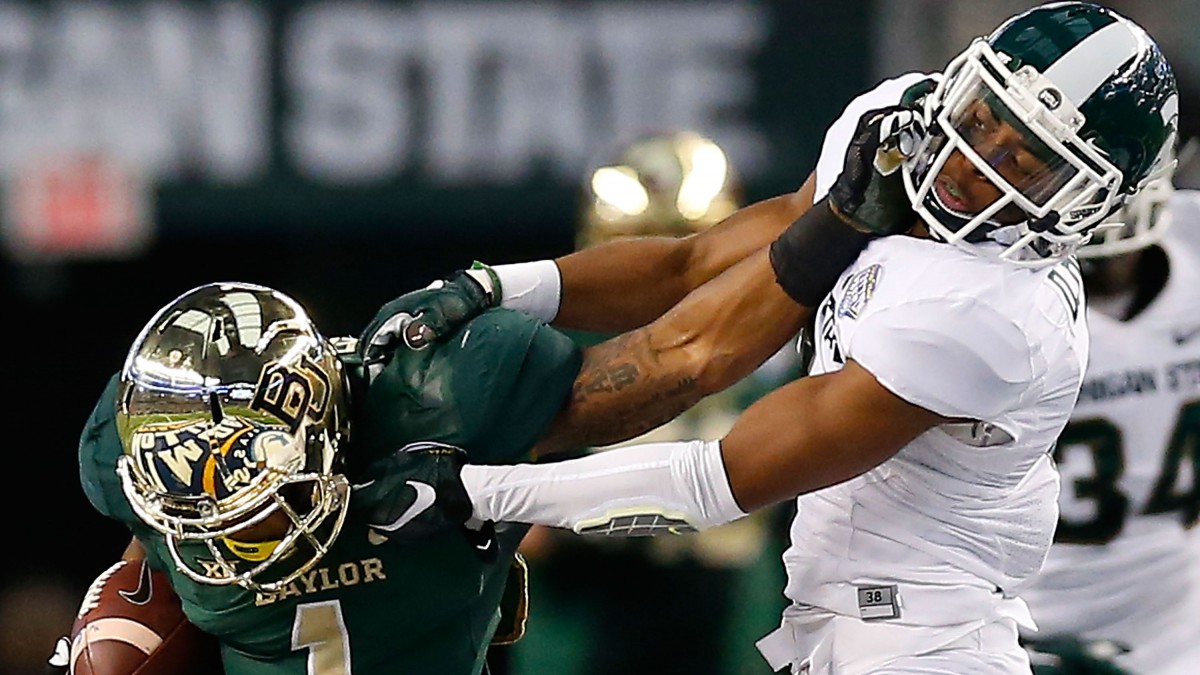 If you missed the warm-up act to last season’s first College Football Playoff National Championship, you missed a doozy, even by 2014 standards. In a tight cluster of bowls that included Florida State flailing and TCU annihilating Ole Miss, no contest was more dizzying than the Cotton Bowl. Michigan State entered the game haunted by two defeats at the hands of the teams that would eventually square off for the title. Baylor carried the psychic weight of a midseason face-plant against West Virginia, a failure that kept it out of the inaugural College Football Playoff bracket. By the end of the third quarter, the Bears led by 20 points. By the end of the fourth, the Spartans had won by one, in a game that turned on an offensive face-mask penalty and a blocked field goal.

It was a teeth-gnashing conclusion for a pair of teams that played fantastic football for most of the year — and for their troubles, MSU and BU enter 2015 not even picked as the best teams in their conferences. That might be fair, but the schools have hit ceilings so many times over the past few years that they’re collectively walking around with their heads bent over to one side. For two programs with such divergent histories — the Spartans claim six national titles; the Bears’ biggest postseason win is still a Sugar Bowl victory in 1957 — there’s a lot of overlap to be found in their recent results, and some common struggles on the way in 2015.

Mark Dantonio took the head gig in East Lansing in 2007; Art Briles arrived in Waco in 2008. Since those hires, both programs have recorded a pair of conference championships and two major bowl appearances, but they must still jostle for the spotlight with in-state rivals like Michigan and TCU, to say nothing of higher-profile programs like Ohio State and Oklahoma. In the Big 12, the teams currently playing the best football are relative upstarts, but there are no shortcuts to the “We’re Texas” mantle. “On a one-to-10 scale,” Briles said this spring, “we’re on about five and a half. It’s a monumental task. It doesn’t happen in two to three years. It happens when a 12-year-old kid sits there in front of a TV for six years, with his dad and his uncle and his granddad, and he sees Baylor winning, and he goes, ‘Wow, that’s where I wanna go. That’s the spot.’” And in the meantime, the Bears have found themselves confronted with a new problem: They’ve pulled away from the Sooners and Longhorns, on the field and in the rankings, only to find themselves being paced by the Horned Frogs, who’ve played only three seasons in the Big 12.

Up north, it’s a classic Red-Team-versus-Blue-Team narrative. Michigan State entered the 2014 season as defending Rose Bowl champs, only to stall out in the second half against Oregon and watch Ohio State skip merrily away from the majority of its Saturday opponents for three months,1 including a 49-37 Buckeyes win in East Lansing. A splashy head-coaching hire in the offseason put Regular Michigan back in the headlines, and all of a sudden it feels like Michigan State, coming off a New Year’s Six bowl win, might be the third-most-talked-about team in its own league. None of this is quantifiable, of course, and it’s not like the Buckeyes and Horned Frogs don’t richly deserve to occupy the same strata as these two programs — but it’s got to drive all of those guys in green just the tiniest bit crazy, don’t you think?2

All of that distance covered, all of that ground made up, and MSU and BU can’t count on five-star prospects just cold-calling them to fill their recruiting coffers. The schools have put in the work, but they can’t just start being storied. In preseason polls, at least, praise seems to be in sync with their recent levels of play. Both teams are ranked inside the top 10 in the Coaches Poll, and within the top 15 in ESPN’s Football Power Index. High marks from the AP poll, when it’s released, seem guaranteed. But the benefit of the doubt will not be automatically bestowed. The only choice they have is to win, and win, and win.

The Bears’ chances for doing just that in 2015 look pretty swell. Both Bryces3 are off to the NFL, but successor quarterback Seth Russell brings a running-threat dimension back to Baylor’s offense, and he plays for a coach who likes nothing more than spending his offseason dreaming up ways to make opponents very, very mad. Baylor also returns every running back that recorded significant touches last year, three of its five most prolific receivers,4 and all but one member of last year’s starting offensive line. The Bears retain most of a defense that was unstable last year but is at least experienced this year, including actual man of oak Shawn Oakman.

Up in Spartyvania, it’s a taller order. Longtime defensive coordinator Pat Narduzzi has been given a well-deserved shot at a head-coaching gig, taking over at Pitt. There are holes to plug in the defensive backfield and an array of question marks about the running back position. Of particular interest will be the body of work Connor Cook puts up at quarterback after blossoming last year (in just the sort of way a firework blossoms) and returning sans Jeremy Langford’s 1,500 rushing yards and Tony Lippett’s 1,100 yards’ worth of catches. And whomever you slot in on top, the gap between TCU and Baylor is nowhere near so overt as it is between Ohio State and Michigan State. Getting past these Buckeyes will be so, so tricky, but not impossible. And again, the Spartans have already passed all of their other choices on the way up. It’s keep climbing, or start falling back down.

Heading into 2015, the Spartans and Bears are presented with the same challenge: It’s time to sling legs up from their already lofty perches and win the big one. Neither team is considered a surefire bet. Both face sterner competition to win their own leagues than they’re likely to face outside of them in a bowl. And both will have to wait a while before the quality of their upcoming campaigns is even that well defined. MSU has a Week 2 home rematch with Oregon but won’t see most of the best of its opponents until November, with trips to Nebraska and Ohio State and a homestand against Penn State. Baylor has a hilariously back-loaded schedule, hosting Oklahoma and visiting K-State, Oklahoma State, and TCU all in the final few weeks of the regular season.

There are so many various omnipresent absurdities that define the landscape of this sport, so much cognitive dissonance you have to learn to live with if you choose to make this game part of your life. Ascending a mountaintop only to see the clouds clear and another, higher peak present itself? To be in the top 10 and feel like it’s still you against the world? Again, it can’t not rankle to be without the kind of no-questions-asked, this-team-is-dope preseason pass we tend to dole out to the more perennial powerhouse programs. If you’re out to prove yourselves, though, there are worse plateaus from which to begin your ascent than these.

Say Good Night to the Bad Guys: An Appreciation of Late-Career A-Rod and Tiger Woods

Not According to Jim: All of the Non-Harbaugh Reasons to Get Excited About Michigan Football in 2015