Not According to Jim: All of the Non-Harbaugh Reasons to Get Excited About Michigan Football in 2015 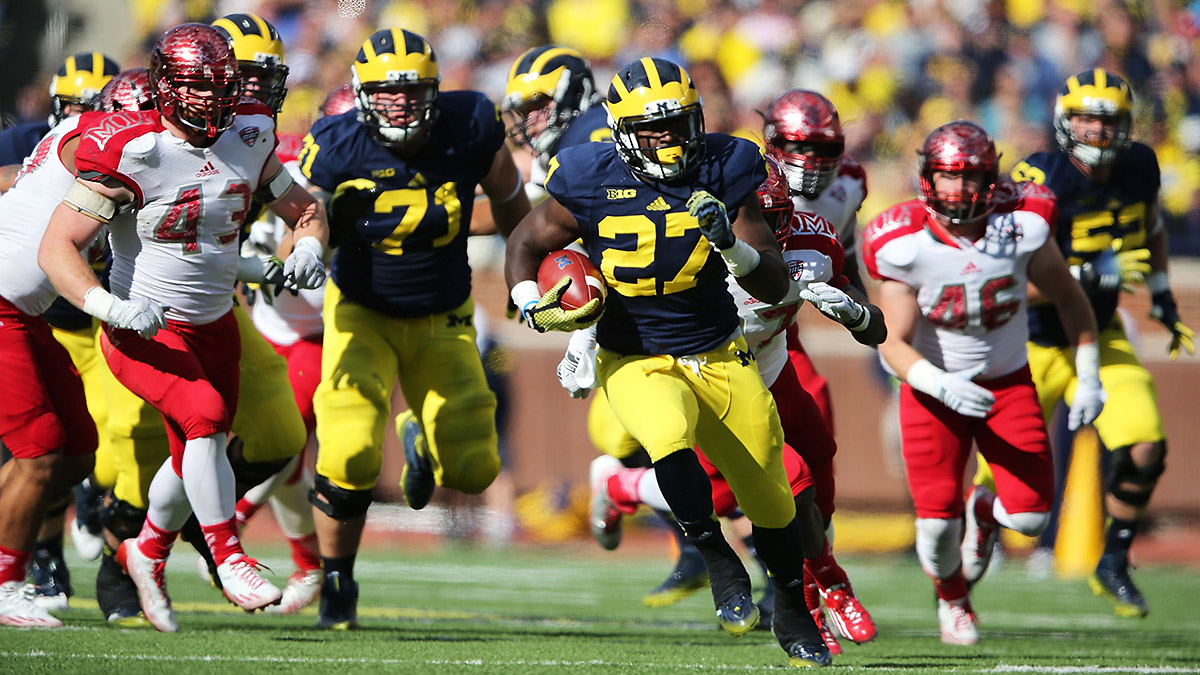 Are you sick of hearing about Jim Harbaugh? No? I mean, after the bizarre offseason he’s been having, neither am I. But would you like to learn something about Michigan football that goes beyond our favorite khaki-wearing coach? Then this piece is for you.

Harbaugh, who previously rebuilt the University of San Diego, Stanford, and the San Francisco 49ers, brought an immediate tidal wave of hype to Ann Arbor when he left the NFL to rejoin the college ranks last December. But despite what the pervasive savior narrative might indicate, Harbaugh isn’t attempting to pull the Wolverines out of a black hole — because Big Blue hasn’t actually been that bad the last few years. The Wolverines’ 0-2 skid to end last season cost them a shot at a bowl game, but they’d reached the postseason in each of the four previous years, notching a Sugar Bowl win in 2011 that vaulted them to no. 12 in the final AP poll.

Of course, this is Michigan. One top-15 finish in eight seasons won’t cut it for a program that had seen eight such finishes in the previous 10, including a national championship in the final year before the BCS altered college football’s postseason landscape. So now there’s a new man on campus, and he’s carrying the lofty expectations that come with being a former Wolverines quarterback, reviving numerous other programs, and earning the “Michigan Man” label that failed 2008–10 head man Rich Rodriguez never could. But if the Wolverines are able to squeak into the sport’s upper echelon this season, it won’t be just because of Harbaugh. Michigan was set up for success before he arrived.

Brady Hoke, who carried some “Michigan Man” swagger of his own when he replaced Rodriguez but ultimately failed to find any more staying power, didn’t deliver quite as bad a final season as what you probably remember. His 5-7 record in 2014 was partly the product of bad luck, masking considerable talent behind a negative-16 turnover margin that put Michigan 124th among FBS teams. Even adjusting the numbers to try to account only for turnovers that resulted from chance1 shows Michigan with one of the unluckiest turnover ratios in the country.

Turnovers weren’t the only stat that masked Michigan’s true potential. The advanced metrics agree that last year’s Wolverines were better than their record indicated. Michigan ranked 54th in Football Outsiders’ F/+ rankings, the second-highest mark for a 5-7 team, and ranked second among five-win teams in ESPN’s FPI. While those are unexceptional marks, they do indicate that Michigan played like a bowl team last season.

Now, behind many of the players who underachieved last season as well as some touted recruits and transfers, Michigan is surprisingly well-positioned to improve in 2015. That begins in the crowded backfield, where Derrick Green will likely anchor what should be a strong ground game. The former five-star recruit disappointed as a freshman after bringing considerable hype to Ann Arbor, but he bounced back as a sophomore, averaging 5.7 yards per carry and about 80 yards per game before breaking his clavicle in October.

Green, who reported to spring camp at 234 pounds, will be competing with another big back, USC transfer Ty Isaac, as well as with De’Veon Smith, whom Green split carries with for the first half of 2014. Isaac hasn’t played since 2013 but ran over defenses when he last saw action, rushing for 5.9 yards per carry as a Trojan. Meanwhile, Smith was alarmingly hit-or-miss last season, recording per-carry averages of five yards or better in only four games, and may get pushed back in the rushing rotation. But he has the talent to rebound. The other back who could potentially make an impact is senior Drake Johnson, who provided a shot of adrenaline for the ground game in the second half of the season, but suffered an ACL tear in the finale.2

Those backs will work behind four returning offensive linemen (Mason Cole, Graham Glasgow, Kyle Kalis, and Ben Braden) who struggled at times last season but started to jell late in the year. They also boast a bevy of talent that makes it reasonable to expect improvement, and that coach I promised not to focus on earlier has historically enjoyed great success on the ground.

There’s also a lot to like about the defense, which was excellent against the run last year and decent against the pass, per S&P+ Ratings, and finished the season with the seventh-fewest yards allowed per game in the FBS. Michigan lost some personnel to the NFL, most notably tackling machine and All–Big Ten linebacker Jake Ryan, and starting defensive ends Frank Clark and Brennen Beyer. But nearly everyone else returns, and while the pass rush may suffer some regression, the secondary should improve behind a full season from former five-star Jabrill Peppers, who played in just three games in 2014 before taking a medical redshirt after a leg injury, and Stanford transfer Wayne Lyons. The Michigan defense could make the jump from “very good” to “great” in 2015. 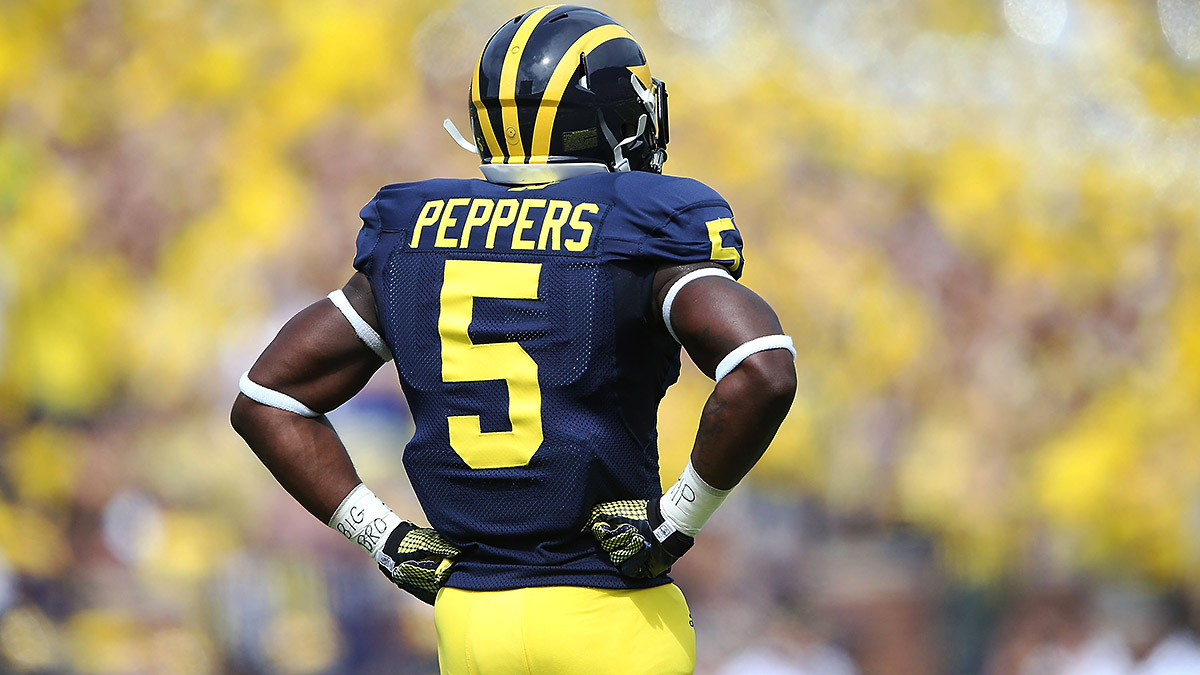 Of course, the elephant in the room remains Michigan’s messy quarterback situation. Iowa graduate transfer Jake Rudock posted decent stats with the Hawkeyes in 2014 (61.7 completion percentage, 203 yards per game, a 133.5 passer rating, and 16 touchdowns against five picks) but is locked in a battle with Shane Morris, who’s unproven with zero touchdowns, five interceptions, and a 49 percent completion mark.

Neither QB will burn worlds at Michigan, but neither will need to. Given Michigan’s current roster construction, it’s easy to see the 2015 Wolverines as a tough, power-running team that grinds out close games en route to a decent bowl berth. And that certainly sounds like something we’ve seen before.

With preseason no. 1 Ohio State and fellow playoff hopeful Michigan State crowding the top of the Big Ten East standings, it’s highly unlikely Michigan will contend for the conference crown and a spot in the College Football Playoff.3 But a nine-win season should be within reach. Of course, Michigan could always limp to another disappointing finish, but if a few things break right and the Wolverines wind up playing on New Year’s Day, it won’t only be because the new head coach is the Messiah. It will be because this team has underachieved for a while, and it has the pieces it needs to do well right away.

College Sweethearts: For Baylor and Michigan State, It’s Not Easy Being Green

The Triangle Starting XI: Zouma, Agüero, and the Rest of Our Favorite Premier League Players