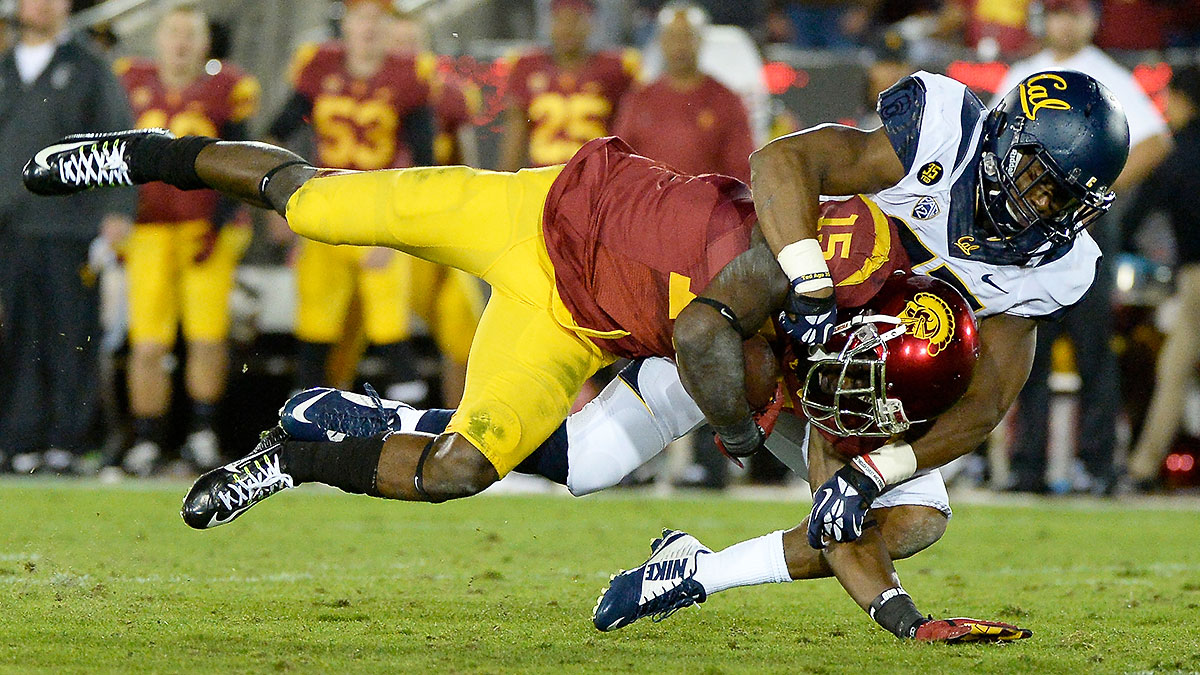 If you closely follow a college football team, it’s around this time of year that you begin to hear positive news coming out of your squad’s fall camp. New players are bringing energy to the team! Old ones are improving! Last year’s weaknesses are being fixed! Everything sounds positively rose-y.

That’s certainly held true for Cal this August, with fans anxious to see last year’s porous defense improve able to gobble up the reports coming out of Memorial Stadium, which claim that the Bears’ D is shining as the top unit on the field.

I’m a UC Berkeley alumnus, so I’m paying attention, and I’m a little hesitant to buy in already considering the team didn’t even start practicing in pads until Monday. But it’s easy to understand why fans are so eager to see defensive improvement. Outside of a few hiccups against Washington and Stanford, Cal’s offense was so dominant last year that it gave the team a chance to win almost any game. The Bears fielded the second-highest scoring offense in the Pac-12 and the 11th-highest in the nation. Those totals stemmed in part from Cal’s lightning-quick “Bear Raid” offense, which inflates volume stats like points per game; the Bears were less eye-popping in efficiency metrics but were still effective, ranking 38th in Football Outsider’s Offensive S&P+ ratings. With quarterback Jared Goff, a potential 2016 first-rounder, and nearly all of his receiving targets returning in 2015, nobody’s worried about the offense, which is a known commodity. Defense is the unknown variable, and in turn the unit that could determine how well Cal does in 2015.

Cal’s 2014 pass defense might be the worst a college football team has ever fielded. The numbers are mind-boggling: Cal gave up 4,406 yards and 42 touchdowns through the air, both FBS records. The Bears allowed 367.2 passing yards per game, 70 yards more than the next-worst team. Think about that: Cal’s pass defense was so bad that it gave up almost an entire extra scoring drive per game in just passing yards than college football’s second-most pitiful pass defense. Worse, that wasn’t anything new for the Bears, who also gave up the most passing yards and third-most passing touchdowns in 2013.1

Those gaudy numbers were at least partly the result of Cal’s pace, which gives opposing teams more possessions with which to work. But even when looking at the passing efficiency ratings the Bears allowed instead of focusing on raw yardage, Cal still came in 118th out of 128 FBS schools last season. Cal suffered so many defensive lapses in 2014 that it was sometimes impossible for the offense to score enough points to keep up. Not even the most potent attack can be expected to score 50 points every game.

Last year’s defensive core consisted mostly of sophomores and juniors. Now, those players will have to prove they can perform like seasoned juniors and seniors. Cornerback Cedric Dozier, the only player to start all 12 games in the secondary last year, was out of position often enough to be a liability. Cameron Walker, who started the first 10 games, delivered a similar highlight reel of blown coverages. Darius White took the starting spot from Walker for the final two games, but he was also often unable to make plays. Sophomore Darius Allensworth is reportedly establishing himself as a starter in camp, but he never looked all that comfortable in coverage as a freshman.

A bright spot was safety Griffin Piatt, who led the team in interceptions, passes defensed, and tackles before losing the final half of his season to a knee injury, but even he was prone to defensive lapses. Stefan McClure might be the only guy who saw significant time in the secondary and doesn’t carry a laundry list of lowlights, but with just one interception in 2014, he didn’t bring a lot of highlights, either. Even when everyone dropped back into coverage, it was never hard to find an open guy. It also doesn’t help that the best tackler in the secondary, Michael Lowe, has graduated, since literally everyone else back there displayed poor tackling in 2014, making Cal extremely susceptible to screen passes.

There are a few new faces, most notably Antoine Albert, a three-star juco transfer, and Jaylinn Hawkins, a four-star receiver who is switching to defensive back. But you know things are bad when the backup quarterback makes the switch to safety.

The secondary wasn’t the only problem, though: Cal’s defensive line also failed to consistently pressure quarterbacks. The Bears managed just 16 sacks last year, 113th in the FBS, and there’s little reason to expect improvement. One of the better pass-rushers on the team, Brennan Scarlett, transferred to Stanford (of all places!) after missing the final seven games with injury, and none of the guys who are likely to get heavy snaps at defensive end (Kyle Kragen, Jonathan Johnson, and Puka Lopa, among others) project as QB terrorizers.

The linebacking corps, anchored by Michael Barton, is easily the most competent defensive unit, and Cal was actually decent against the run last season. But in a 4-3, none of those guys are real threats as pass-rushers.

Despite that horrifying string of stats, and despite the lack of exciting blue-chippers, Cal’s defense isn’t completely devoid of reason for optimism. For the first time since 2012, the Bears have the same coordinator sticking around. Art Kaufman, who previously rebuilt the Texas Tech defense, fields a relatively unaggressive base defense that is known for its simplicity, and the continuity on that side of the ball should help Cal minimize the out-of-position mix-ups that plagued the team in 2014. Of course, the opposite could also be true: The same system could produce the same results as last year and fall flat again, but it’s reasonable to assume that having a familiar leadership front will help.

That’s an easy prediction to make for one simple reason: Numbers don’t stay that bad for that long, and a team that delivers a historically bad performance will regress toward the mean the following year. Even with the same personnel on the field and on the sideline, it’s unlikely Cal will perform as poorly as it did against Washington State for the second consecutive year. Even absent tangible reasons for excitement, there is the safe “They can’t be that bad again!” argument to fall back on.

That’s not enough to enable the Bears to take a huge defensive leap, but it might be enough to help them take the baby step from terrible to mediocre. And when paired with this offense, a baby step on D will be enough to get Cal back to the postseason. If the defense can slow teams just a little, the offense will do the rest. Because the offense is awesome.

The sky isn’t exactly the limit for Cal. The Bears aren’t going to win the Pac-12 or play in Pasadena on January 1. But their first eight-win season since 2009 is well within reach. The Bear Raid will be great and the team will be fun as hell. The defense just needs to provide a sign of life.

The Need for Spieth: Why the Media Adores Golf’s Latest Phenom