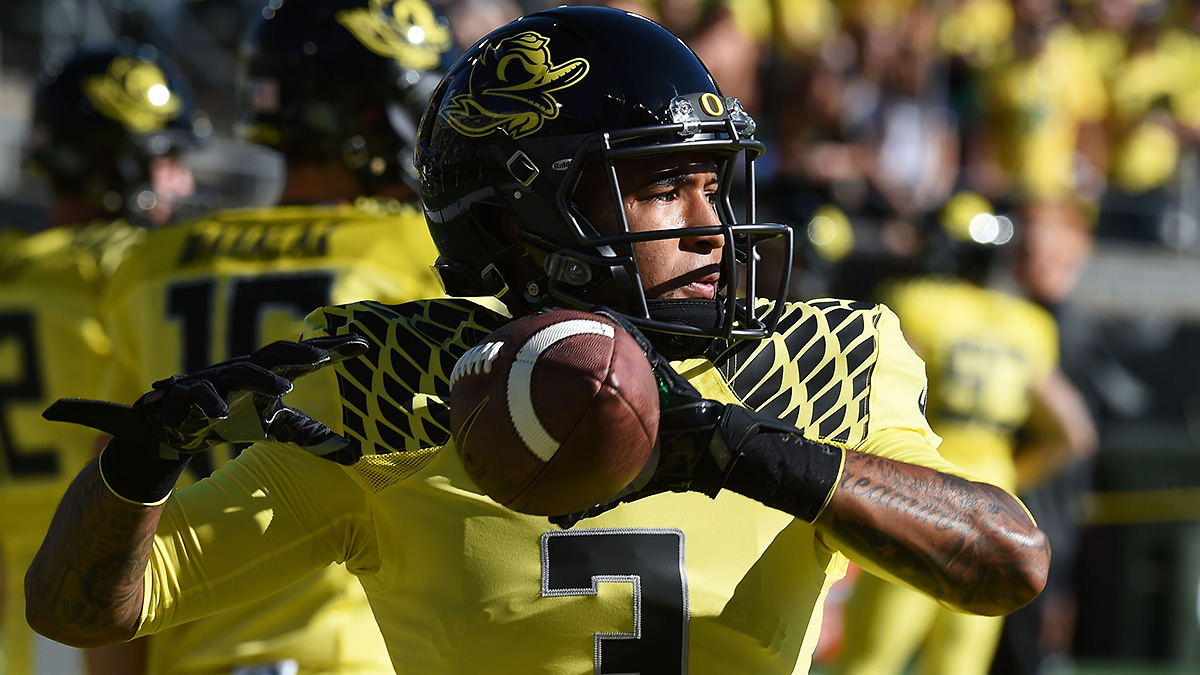 On Saturday, then no. 12 Oregon blew out Georgia State 61-28, a par-for-the-course result for the Ducks even with their starting quarterback sidelined by a broken index finger. Oregon now has two commanding home victories and one three-point road loss to a top-five outfit that might have been a win had Vernon Adams not sailed one late. While no playoff hopeful wants to see its hopes for an undefeated season dashed this early, the inaugural College Football Playoff proved that it’s possible to recover from a tough road loss in September, and at a glance, the Ducks appear to have barely skipped a beat in their quest to return to the national championship game. They might have to win out to keep their playoff hopes alive, but they’ve already put their toughest opponent behind them.

Look under the surface of those three box scores, though, and you’ll find worrying signs that this Oregon team isn’t playing at the same level as the high-powered outfits that have finished in the top 10 every year since 2010.

Oregon replaced a Heisman-winning quarterback with an FCS transfer who had less than a month to learn the system, and while Adams is extremely talented, even the best passers would have trouble filling Marcus Mariota’s shoes. Meanwhile, the defense lost five starters, including first-round draft pick Arik Armstead and All-Pac-12 defensive back Ifo Ekpre-Olomu, and glaring holes in the secondary have been a problem early. Not even Oregon, which regularly turns middle-of-the-pack recruiting classes into championship-contending units, could replace so much talent without hitting some choppy water.

But with three games of data now available, it’s clear Oregon is weathering more than just a few rogue waves. The defensive regression is the easiest to quantify: The 2014 Ducks finished 28th in defensive S&P+, an already mediocre mark for a team that has ranked in the top five twice since 2010; now, however, Oregon has dropped to 58th, with opposing quarterbacks regularly bombarding the Ducks’ secondary in a way they haven’t been able to in years. The secondary coughed up a 156.9 passer rating to an FCS team; that would have been the second-worst mark Oregon posted last year after — you guessed it — the championship game against Ohio State.

Oregon’s defense has weathered the yardage storm by generating turnovers — five interceptions and two fumbles already — but relying on takeaways is always a risky proposition. Though the Ducks led the FBS in turnover margin last year, that was largely a product of how rarely Mariota and the offense gave the ball away, and Oregon likely won’t be able to rely on such a mistake-free attack this time around.

Even without Mariota, Oregon’s offense is still equipped to drop mind-boggling numbers on opponents. Royce Freeman is arguably the best running back in the Pac-12, and the Ducks’ receiving corps is among the best in the nation, but Mariota made the hurry-up offense hum like an orchestra in perfect tune; Adams is still learning how to conduct. After Week 3, Pro Football Focus rated Adams as the worst QB in the conference; and while it’s possible that the broken finger he reportedly played with against Michigan State contributed to some of his wobbly passes, his aggressiveness remains a high-reward, high-risk proposition.

While this team may not have the look of a playoff contender upon closer inspection, and while numerous other Pac-12 squads (UCLA, USC, Arizona, a resurgent Stanford) look ready to compete for the conference crown, one factor could work in Oregon’s favor: Oregon misses Arizona (its Kryptonite) and UCLA (the highest-ranked team in the conference); gets Utah and USC at home; and, if it gets past Utah in Eugene on Saturday, will see relatively smooth sailing until at least late October (when it visits Arizona State) if not all the way until mid-November (when it heads to Palo Alto).

Even with the second-easiest remaining schedule in the Pac-12, per ESPN’s FPI metric,1 Oregon isn’t a shoo-in to win the North: Stanford gets all of its toughest games at home, and Cal, a surprising dark horse in the conference, packs an offensive punch that could present a matchup nightmare for Oregon’s secondary. Still, it’s easy to envision a scenario in which the Ducks cruise through some of their weaker opponents while sorting out their issues on defense, and while Adams becomes healthier and more comfortable in the system, leading to a more lethal Oregon team in November than the one we’re seeing right now in September.

Oregon doesn’t face the kind of cupcake-laden schedule that might draw the ire of Bret Bielema, but the slate is soft enough to give the Ducks time to sort out their issues. In that sense, Oregon gets the best of both worlds, with enough favorable matchups early to work out the kinks and enough tough opponents late to potentially boost the Ducks’ résumé. Even if the talent drop-off from 2014 to ’15 makes Oregon look like a three-loss Alamo Bowl squad, the schedule might be favorable enough to push the Ducks into a New Year’s Six appearance.

The Ducks seem mortal for the first time in a long time, easily capable of losing a game or two that they shouldn’t due to a rough outing from Adams or a night when the defense gets burned. At the same time, there aren’t many — if any — games left on the schedule that the Ducks should lose, and when a playoff berth is on the line, that’s a damn good advantage to have.

'The Jonah Keri Podcast': Len Kasper on the Cubs, and Rhea Butcher on the Indians and Braves

Don’t Panic, But Maybe Panic: Advice for the Seahawks, Cowboys, Colts, and More