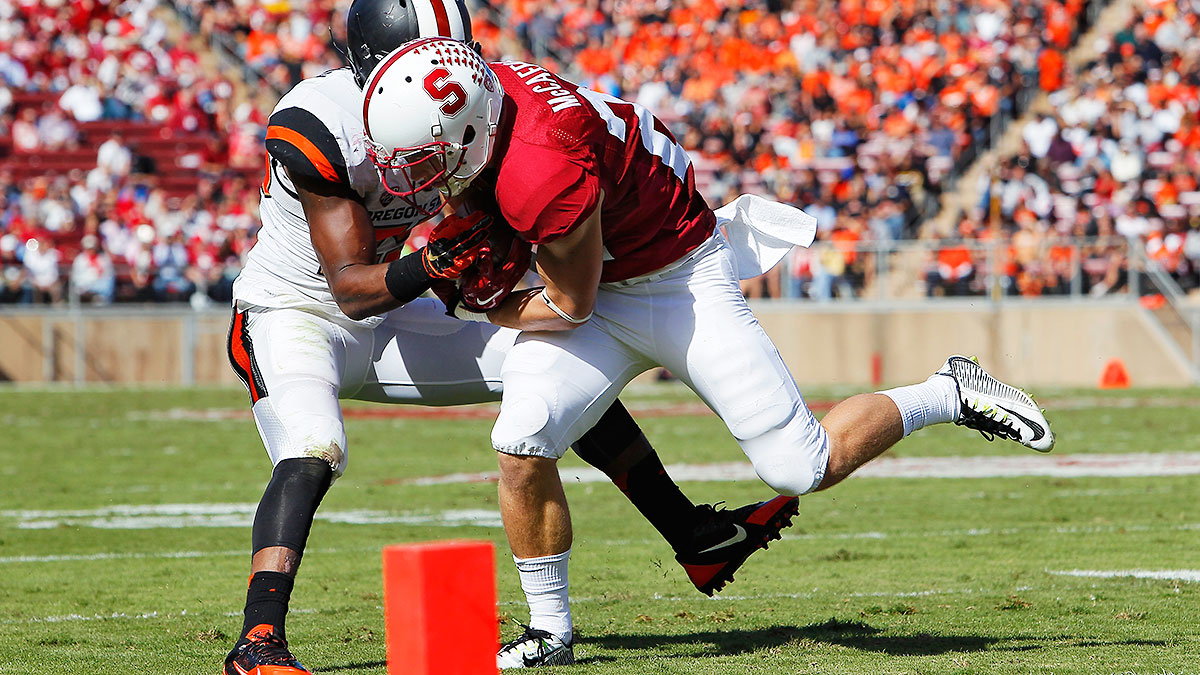 It’s easy to pinpoint the moment that Stanford, historically a mediocre football school, blossomed into the power it’s been for the past half-decade. In 2009, a redshirt freshman quarterback named Andrew Luck delivered one of the best performances of his young career, throwing for 251 yards and two touchdowns on just 20 attempts as the Cardinal beat no. 8 Oregon, 51-42. It was the first time Stanford had topped Oregon since 2001, and the following week, the Cardinal were ranked in the AP poll for the first time since that same season.

But as good as Luck was, someone else led the team that day: Toby Gerhart, looking more like a runaway bowling ball than a human running back, pummeled the Ducks en route to 223 rushing yards, a Stanford record. It was the kind of performance that not only put Stanford back on the college football map, but that came to define the program’s offensive identity. The very next week, the Cardinal collectively put up 325 rushing yards in an upset of no. 9 USC, rising to no. 17 in the BCS standings as a result. Though the team would lose the next week and would ultimately drop out of the postseason rankings, the foundation for the future of Stanford football was set.

Stanford’s most recent win over Oregon, in 2013, came thanks to a similar kind of rushing performance, with Tyler Gaffney helping the Cardinal amass a collective 274 yards, and the Cardinal keeping the ball on the ground to extinguish a desperate Oregon comeback effort in the fourth quarter. That win propelled the Cardinal into national championship contention, though they ultimately had to settle for their second consecutive Rose Bowl berth after losing to USC the following week.

In between those two wins over Oregon came five years of peak Stanford football: four consecutive top-15 finishes in the final AP poll and back-to-back Rose Bowl appearances (in 2012 and 2013), all fueled by a rushing attack that habitually ranked near the top of the Pac-12 in yards per game and only fell out of the national top 25 once. Stanford’s career and season records for rushing attempts, yards, touchdowns, and 100-yard games are now all held by Gerhart or Stepfan Taylor, the two premier backs during that stretch.

But Stanford drifted away from that ground-first mentality last year, rushing for just 158.8 yards per game, which ranked 72nd among FBS schools. It was the program’s lowest rushing total since 2007, Jim Harbaugh’s first season, and also the first time the team had failed to produce a 1,000-yard rusher since that ’07 campaign. Remound Wright was the top weapon, but his lack of explosive ability (just five rushes of 20-plus yards) neutered his chances of being a consistent and effective threat out of the backfield. Kelsey Young and Barry Sanders, Stanford’s other backfield threats, didn’t prove any more effective, failing to even sniff the end zone.

Without an effective tailback to fuel it, Stanford’s offense sputtered. After five straight seasons in the top 30 in Offensive S&P+ (and three in the top 10), Stanford fell to 45th last year, its lowest mark since 2007. Unable to rely on a consistent play-action threat, junior quarterback Kevin Hogan saw dips in his passer rating, yards per attempt, and touchdowns while being forced to throw nearly 60 more passes on the season. Stanford ended the year with one of the worst offenses in the Pac-12, wasting the potential of the team’s historically great defense on the way to a disappointing 8-5 record, the first time since 2009 that the school failed to record double-digit wins.

There was, however, one spark of life in the backfield: Christian McCaffrey, who got few chances while playing as a true freshman, but made those touches count, rushing for an eye-popping 7.1 yards per carry.

It’s hard to learn all that much from one play, but this one against Maryland shows McCaffrey’s ability to both break tackles and change direction:

Feel free to pause it at the three-second mark to gape at how screwed McCaffrey seemingly is at that moment. Unpause, but don’t blink: Maryland’s Matt Robinson easily gets around a halfhearted holding attempt from Stanford’s Devon Cajuste on the outside, putting himself in position to blow up McCaffrey some five yards deep in the backfield. Robinson gets both arms wrapped around McCaffrey, and he has a herd of defenders behind him in case McCaffrey somehow slips through. Then suddenly McCaffrey is racing to the other side of the field with a trail of Terps behind him, following a block from Hogan (!) and taking the ball for 22 yards. It’s not a touchdown, but getting 22 yards from a play that looked more like a loss of 5 is pretty special.

McCaffrey is the son of former NFL Pro Bowl receiver Ed McCaffrey and former Stanford soccer player Lisa McCaffrey. His genes have gifted him with a quick, elusive running style that stands in contrast to the bruising, downhill running Stanford has had in its arsenal in recent years. McCaffrey’s game is defined by his versatility, and coach David Shaw is talking about continuing to use the phenom as a punt and kick returner, roles in which he excelled in 2014. Shaw has said he plans to use McCaffrey “all over the place” in 2015, and he reportedly has McCaffrey taking snaps at wide receiver and quarterback in camp.

But the ground game, not special teams or the Wildcat formation, should determine Stanford’s fate this year. McCaffrey is Stanford’s best chance at returning to the rush-first attack that defined the program during its winning days this decade. Word out of The Farm indicates that McCaffrey is bigger, stronger, and better in pass-protection than he was last year, all requisites for getting more time in the backfield. Though McCaffrey may end up seeing time on special teams in the same way that Ty Montgomery, another versatile threat, did, running back is the spot where he can do the most damage right away.

A running game won’t allow the Cardinal to clear every hurdle. The team lost most of its defensive contributors to the NFL as well as two of its most talented offensive players, left tackle Andrus Peat and Montgomery. But a power-running game is what brought Stanford into its current golden age, and if the Cardinal return to Pac-12 contention, it’s more likely to be because they embraced the ground game anew rather than because they struck gold with another once-in-a-generation QB. This season could determine whether Stanford’s recent success is just a flash in the pan or if the Cardinal have built a football power to last. Amid that kind of uncertainty, Stanford would do well to remember what made the program one of the powerhouses of the last half-decade.

College Sweethearts: When ‘Next Year’ Becomes This Year for Georgia and Oklahoma

Nationals Disaster: Remember When Washington Was Supposed to Be the Best Team in Baseball?