Nationals Disaster: Remember When Washington Was Supposed to Be the Best Team in Baseball? 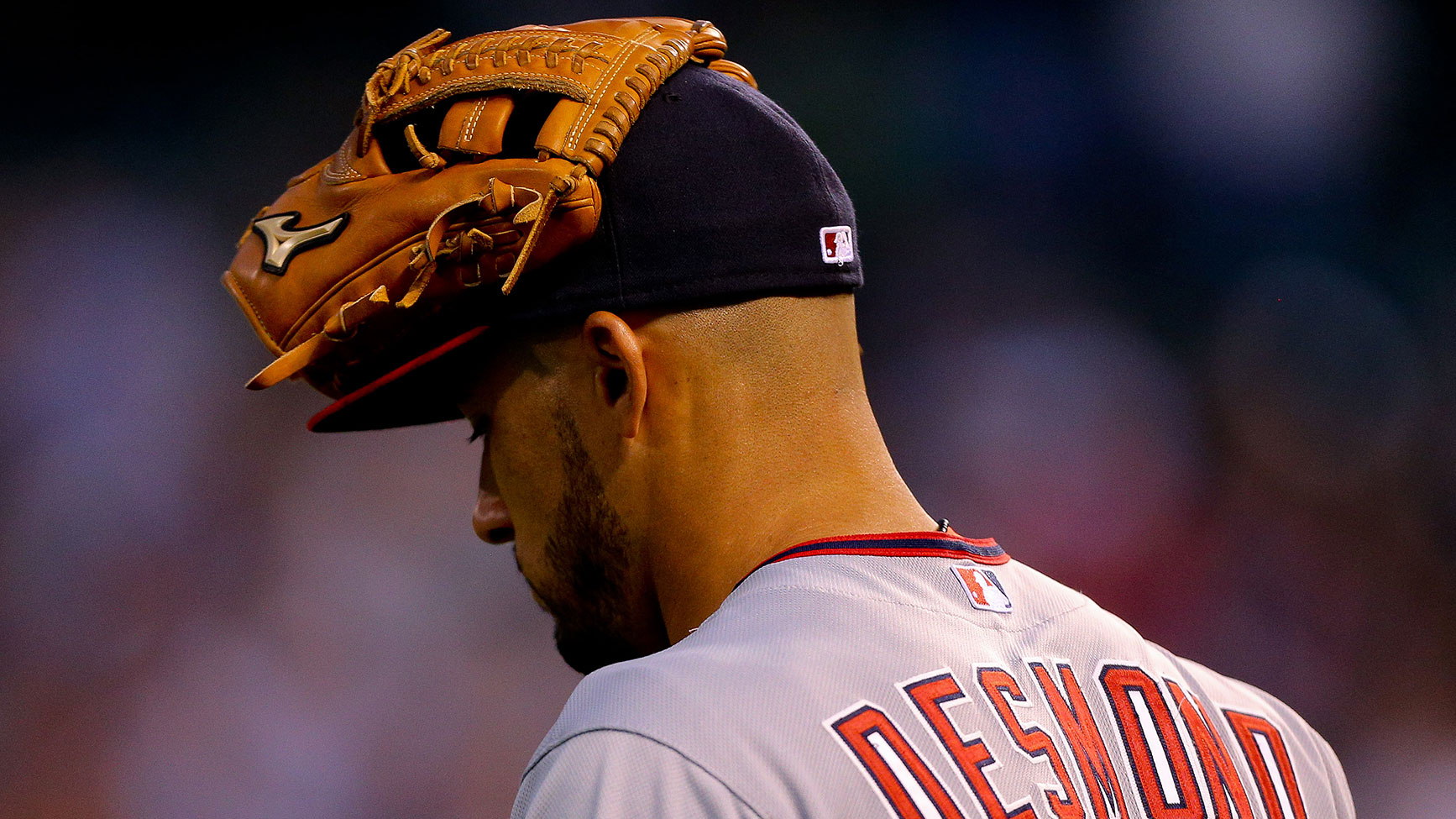 The Nationals were supposed to run away with the NL East. That’s what we told you — more than once. Heck, that’s what everyone told you. Even the computers: The Nats had such high playoff odds to start the year (94.5 percent) that there was even some talk about Matt Williams’s squad as a clear World Series favorite, even amidst the inherent randomness of the playoff system.

So, um, about that. Bryce Harper is putting together a better season than any of us expected — the best age-22 campaign this side of Ted Williams — and yet Washington recently just scraped its way back to .500. With one-quarter of the season left to play, they’re four games back of the Mets, but remain heavy underdogs to win the East and have almost no shot at getting a wild-card berth.

Considering all that, we’re left with one question: What the hell happened?

A Bunch of Good Players Stopped Being Good

Let’s start with a simple chart:

All four of Washington’s best position players, and its second-best pitcher, combined for about 24 Wins Above Replacement in 2014. In 2015? They’re on pace for six. As in: six! If you’re looking for a quick way to explain how the team has more than offset Harper’s surge in production (1.5 WAR in 2014; projected to finish 2015 around 8.5), this is it. If these five players were all just within the orbit of their 2014 performances, the Nationals wouldn’t just be ahead of the Mets in the East; they’d be running away with the division.

The most immediate and obvious explanation is injuries. Rendon has played in just 39 games this season, Werth 48, and Span, who remains on the disabled list, 59. Strasburg returned from the DL earlier this month, but he’s been limited to just 16 starts. None of them have been particularly great when they’re on the field either, but chances are that they’ve all spent a good portion of the season playing at less than 100 percent.

For Rendon and Werth, the drop in quality has been particularly massive. Rendon has completely lost the power stroke that fueled his 66 extra-base hits and fifth-place MVP finish last year, as he’s batting .247/.329/.322 this season with just one home run. A late bloomer who dominated in the first half of his 30s, Werth’s hitting .191/.271/.301 and suddenly looks closer to 56 than 36 years old — although he’s had a couple of key hits this week in the hitter’s paradise of Coors Field.

Meanwhile, Desmond can’t even fall back on injuries as an excuse: Despite a recent hot streak, he’s still batting an abysmal .229/.279/.390 in his walk year before free agency,2 and he’s the team leader in games played. He also turned down a $107 million contract extension before the start of the 2014 season, and not since Juan Gonzalez has a player so wished he could take back a contract decision.

When multiple key players spend lots of time on the shelf, the defense struggles, too. According to Baseball Info Solutions Defensive Runs Saved, the Nats rank just 11th among NL teams in team D.

Werth has been one of the worst defenders in the league when healthy, and his various replacements have teamed up to make the Nats a league-worst 13 runs below average in left field, per DRS. Yunel Escobar has been one of the season’s few offensive bright spots, but he’s been playing out of position at third, so the Nationals are a minus-seven at that spot. The combination of Ryan Zimmerman playing out of position at first and Clint Robinson filling in when Zimmerman’s been hurt has netted a minus-seven on the other side of the diamond. Michael Taylor and friends have combined with a hobbled Span to produce a minus-eight in center. Throw in Desmond’s predictably lousy D at short, and you have a team that’s made life difficult on its pitchers.

Speaking of those pitchers, what happened to the Nationals’ super rotation that was supposed to dominate the world? Well, it’s still been pretty good, but not quite great. The $210 million man Max Scherzer has done more than his share at the top of the rotation — although even he’s cooled off a bit since All-Star break. Strasburg’s pitched much better since coming off the DL two weeks ago, and he’s maintained an elite strikeout rate throughout the year, but he’s still giving up an extra run-and-change per game this year thanks to tons of balls in play falling in for hits and a low strand rate. Gio Gonzalez has been a ground ball machine, but inconsistency3 coupled with that leaky infield defense has made him an unreliable option. Doug Fister’s also spent lots of time on the DL, and his ERA’s up two full runs this year. The good news is that rookie Joe Ross has filled in well for Fister, and the staff’s fielding-independent numbers are better than league average even after stripping out Scherzer’s big year. Their starters’ ERA looks higher than it should be, as only the Phillies have posted a bigger gap between their rotation ERA and FIP. For that, we can again blame that iffy D.

When a team with big expectations disappoints, the blame inevitably falls on the manager’s head. The winner of the NL Manager of the Year award in his debut season last year, Matt Williams has come under heavy fire from fans and media for the Nationals’ struggles this season. Yet despite our best efforts, ascribing credit and blame to managers is still a tricky endeavor. If Williams was regarded as such a skilled leader a year ago, how and why did he suddenly and supposedly become so bad in that role in 2015?

As we saw during Game 4 of last year’s NLDS, Williams has struggled with bullpen management. His biggest problems are that he’s almost pathological about using specific relievers only in their pre-assigned roles, and he doesn’t think ahead well enough in tight situations. Granted, pretty much everyone still refuses to do things like use their closer in tie games on the road, but Williams has made the kind of little mistakes that eventually add up into big ones.

One stark example came in the July 31 Wilmer Flores Game: It went to 12 innings, the Nats lost, and neither newly acquired closer Jonathan Papelbon or former closer Drew Storen pitched. While Papelbon was stuck under the “don’t close until you can close” edict, Storen didn’t pitch because Williams didn’t want to use him three days in a row. He’s strictly an eighth-inning guy for Williams, so two nights earlier he pitched the eighth in a game Washington was winning by five runs. Because of the manager’s strict rules, then, one of his best relievers pitched in a game that was already salted away and couldn’t take the mound in a tie game against a direct rival.

Williams has also been frequently criticized for issuing too many intentional walks, but the Nats are right in line with the National League average. There could be deeper issues with when he’s issuing these freebies, but at that point, the effect on the team’s results would be minimal. And this is the problem with all the critiques of Williams: We don’t really know! There are problems with his bullpen management, but on the whole, Washington’s relief corps ranks in the top 11 in both Wins Above Replacement and FIP — better results than were expected at the start of the season. Much of the anti-Williams sentiment could very well be accurate, but right now it seems more representative of the issue with the team as a whole: The Nationals are a thoroughly mediocre team made up of very good players, and we’re still searching for reasons beyond, “Sometimes good players play poorly.”

Ultimately, the story of the 2015 Nats is one of a team that’s had way more things go wrong than go right. Today, every major DL’d player is back and playing except Span, and that means the opportunity is still there for the stars of 2014 to come storming back. The season might look close to doomed, but if there’s any silver lining, maybe it’s this: We were so wrong about them to start the year, why couldn’t we be wrong again?

All stats are updated through Thursday morning.