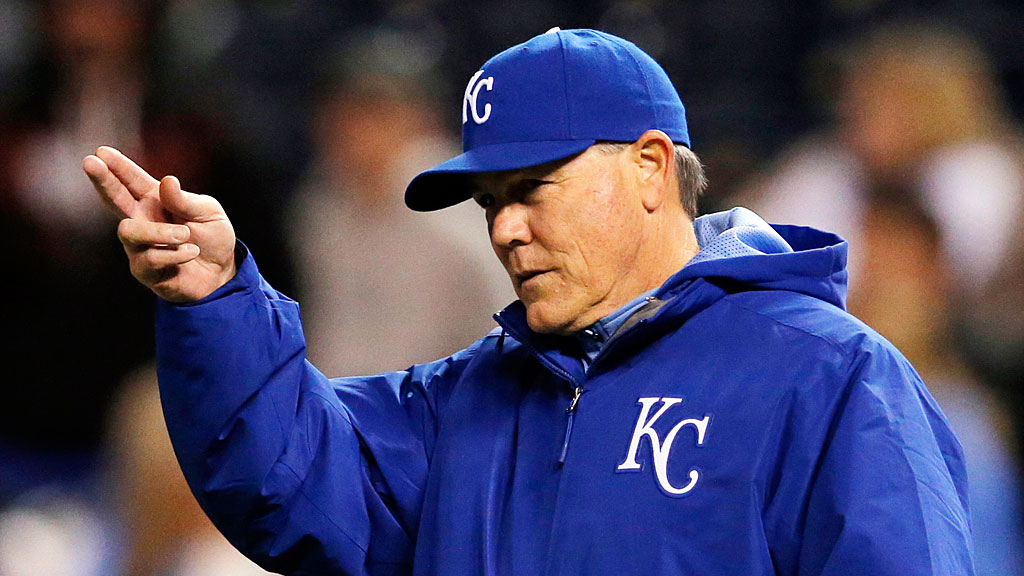 Kansas City got itself into deep trouble Saturday in Baltimore. With the game tied 2-2 in the 10th inning, Royals manager Ned Yost summoned left-hander Danny Duffy to pitch to the bottom of the Orioles lineup. It went terribly, with Duffy promptly loading the bases on a hit-by-pitch and two throwing errors. With no outs, the Royals needed a shutdown reliever to help them escape the jam.

Fortunately, Kansas City employs Greg Holland, who possesses the kind of swing-and-miss stuff and excellent command that make him not only the best option on the Royals’ staff, but one of the best pitchers in the entire American League to call in a situation like this. Holland posted a 1.21 ERA last year as K.C.’s closer while striking out 103 batters in 67 innings, and the 28-year-old right-hander owned a 2.25 ERA with 14 strikeouts in eight innings heading into Saturday’s game. He’d begun warming up in the ninth inning. He was ready to enter the game.

Unfortunately, Yost didn’t call on Holland. Taking stock of the situation, Yost wisely pulled Duffy, then signaled to the bullpen for righty … Louis Coleman. While Coleman had pitched well in limited action last year and can also miss bats, he’d started the year on the disabled list and looked shaky in two of his three outings following his return. Moreover, he’s not Holland. The Royals weren’t going to encounter a bigger do-or-die moment than what they faced in that instant, and they needed an all-world pitcher who could pull the Houdini act. Coleman wasn’t that guy, and after striking out Nelson Cruz, he surrendered the game-winning single to Nick Markakis.

After the game, Kansas City Star beat writer Andy McCullough asked Yost why he didn’t use Holland in that spot. After all, the Royals skipper had tapped Holland to enter the ninth inning of a tie road game in the season’s opening contest.

“That’s the first time I’ve ever used my closer [in that situation],” Yost said, “because I really wanted to win that game on Opening Day. But don’t look for me to do it. I’m not going to do it.”

Royals fans must feel great knowing their manager “really” wanted to win on Opening Day, but apparently doesn’t feel that way about the other 161 games. Saturday’s decision not to use Holland was merely the latest in a long line of questionable tactics that have led snarky observers to coin the term “Yosted” to mock decisions that cost K.C. games. Still, this game and Yost’s subsequent feeble explanation made me wonder whether he is really unique for refusing to use his best relief pitcher in tie games on the road, or whether he simply set himself up for more ridicule with his comments despite being one of many managers who’s determined to hold back his closer for save situations that might never come.

Last year, I examined all the reasons to challenge managers’ orthodoxy of closer usage. While it’s true that we can’t completely discount the value of routine or of closers having a strong sense of when they’re likely to enter each game, it’s also true that the typical long man or middle reliever doesn’t have that consistency or certainty, and they somehow manage. And while managers can’t warm up their best reliever in every close situation without risking burnout, they also know make-or-break situations when they see them. Instead of adjusting their philosophies accordingly, managers are turning to their lesser pitchers when the stakes are the highest.

Let’s take a closer look at K.C.’s usage. Since Opening Day 2013, the Royals have entered the ninth inning of a road game tied 13 times. They’ve used Holland just once in those situations, on Opening Day 2014.

While that’s admittedly a small sample, Yost’s decision to use his closer in only about 8 percent of those situations seems ludicrously low.

But is it? Thanks to the Elias Sports Bureau, we can also gain insight into what the rest of the league is doing by tracking which pitchers were used in the ninth inning of tied games on the road since the start of last season. While a 10th-inning scenario sparked this article, examining a ninth-inning data set provides the cleanest look at leaguewide practices, since extra-inning games can often produce mitigating factors, such as every pitcher other than the closer being used, and the manager having no choice but to turn to his closer eventually. The larger question is whether managers are using their best relievers in the toughest situations, and taking a look at ninth-inning scenarios sheds light on that inquiry. Remember, the number to beat here is 1-out-13, or roughly 8 percent, which is the frequency with which Yost used Holland in these spots.

It turns out Yost isn’t alone.

Since Opening Day 2013, the Braves have entered the ninth inning of road games tied 10 times. They’ve used Craig Kimbrel, arguably the best closer on the planet, exactly zero out of those 10 times. Fredi Gonzalez’s refusal to use Kimbrel in nontraditional spots has extended to the postseason — and the results ain’t pretty. Meanwhile, former Cincinnati manager Dusty Baker has long held a reputation for managing by the book, and the 2013 numbers on Aroldis Chapman confirm that reputation: In 10 opportunities, the Reds used the rocket-armed Chapman zero times. Another former manager, Charlie Manuel, became a legend for employing considerable contortions to avoid using closer Jonathan Papelbon in high-leverage road situations. Like the Braves and the Reds, the Phillies also faced 10 of these scenarios, and also used their closer zero times. While Baker and Manuel are gone, this practice has continued into 2014.

The real surprise is that managers we consider innovative also approach these situations the same way. Rays manager Joe Maddon, for instance, has faced seven tied-in-the-ninth road game situations since the beginning of last season, but has never used his closer, either Fernando Rodney last year or Grant Balfour this year.

Since the start of last year, non-Yost managers have used their closer in the ninth inning of tied road games 19 times out of 307 opportunities, a rate of just 6 percent. Even taking mitigating factors like closer fatigue and closer committees into account, that’s still an astoundingly low number. It’s about half the closer usage rate we’d see if managers simply rolled a die to pick which reliever to throw into the fire.

The Royals sit in second place in the AL Central despite a power outage that’s left them as one of the lowest-scoring teams in the league. Competing against the loaded Tigers and the rest of the AL, their margin for error is slim, which sheds a harsher light on Yost’s late-game tactics. While his stance on closer usage seems particularly puzzling, however, he’s far from alone. His decision not to use Holland against the Orioles reflects conventional wisdom, even though that conventional wisdom might not make sense to those of us who don’t manage baseball teams.

The first manager to abandon the antiquated closer system and adjust his thinking in high-leverage situations may well tack multiple wins onto his team’s record. But until that or another extraordinary strategic change happens, the old theory will still apply to the profession as a whole: Managers do more to help their teams win by managing personalities, encouraging best practices off the field, and running a cohesive clubhouse than they do with the decisions they make during games.

The difference between managers who bunt the most and those who bunt the least amounts to a few runs per season. With a few exceptions, managers tend to build their lineups in almost exactly the same way. And yes, as much as some managers might talk a good game when it comes to bullpen usage, the vast majority of them can’t resist following nearly identical usage patterns. Ned Yost might not be making the right choices, but he’s hardly the only one.

Playoff Power Rankings: A Rundown From a Historic First Round

Steve Nash, George Karl, and Others on Dirk Nowitzki and the Unguardable Play