College Sweethearts: When ‘Next Year’ Becomes This Year for Georgia and Oklahoma 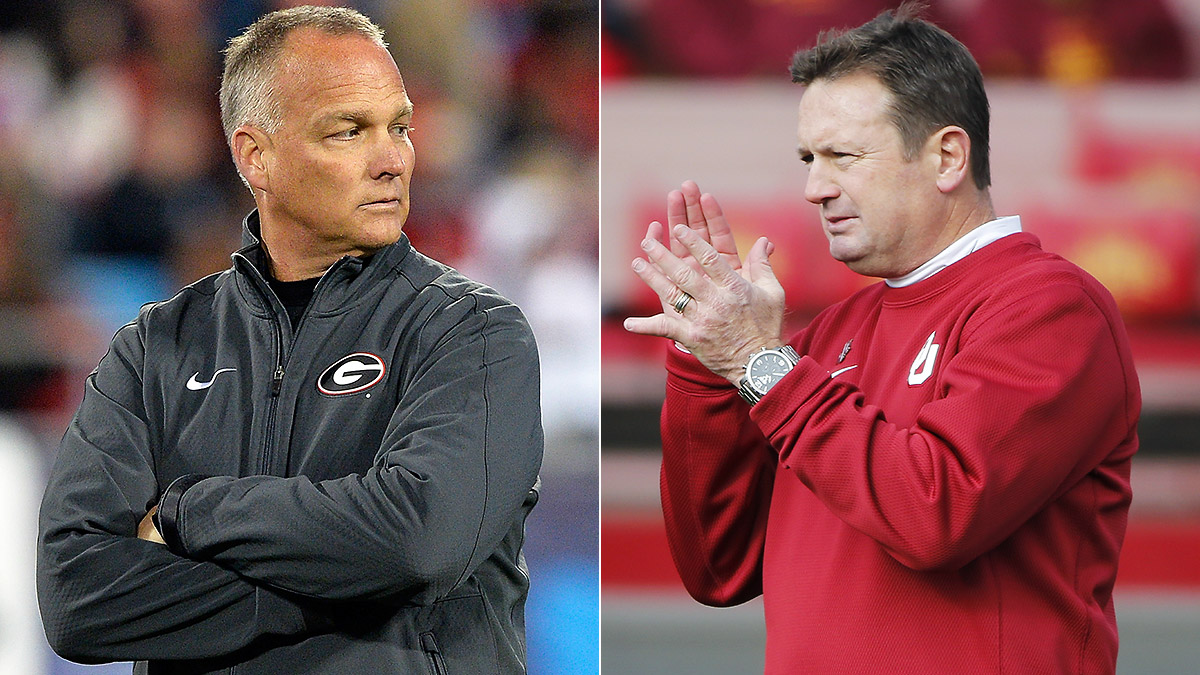 They say good is the enemy of great, and in this case, “they” are Georgia and Oklahoma fans who have been grumbling on message boards for the past few years. The Sooners finished 8-5 in 2014, following up an 11-2 2013 season that ended with them dominating Alabama in the Sugar Bowl. Georgia went 10-3 last year, with the Cocktail Party disaster killing playoff chances. The year before, they went 8-5. Never too high, never too low. Every year, there’s just enough hope to keep things going.

What does that mean for the coaches of those programs? Bob Stoops has been at Oklahoma for 17 years. Mark Richt has been at Georgia for 14 years. Both men are good-looking and affable enough to win recruiting battles. Both have built their programs into perennial contenders over the past 10 years, and both are cursed by that same success. When your team is a title contender every season, eventually people start asking why there haven’t been more titles.

Here, this is a video about Stoops and Richt the past few years:

Georgia had one of the best teams in the country last season. They destroyed the eventual SEC East champions, Missouri, 34-0, on the road. They opened the year with a blowout win against Clemson. They blew out Auburn at home. They lost to Georgia Tech in late November, but I remain convinced they would have won that game if they had still been in playoff contention.

The problem was That Game.

Facing a Florida team that was .500 at the time and playing football straight out of the 1930s (the Gators passed six times all day), Georgia gave up 418 rushing yards and got blown out by its biggest rival, 38-20. It was the second loss of the season, after a heartbreaking loss on the road to South Carolina in Week 2. And to this day, that game makes no sense.

Florida had been decent at running the ball coming into that game, but against Georgia they were better than they’d be for the rest of the season. Georgia had previously beaten two very good teams (Arkansas, Missouri), put 63 on Kentucky, and blew out a top-10 Auburn team. As SBNation’s Bill Connelly wrote this summer, Florida-Georgia “might have been the most befuddling result of 2014.”

I pick a new college team to love every year, and last season, because of Todd Gurley and such-an-SEC-name-it-had-to-be-made-up Hutson Mason, I chose Georgia. I also picked them to win the national title.

The Gamecocks (2-1, 1-1 SEC), faced with a 1st-and-goal on their 4-yard line, held the powerhouse Bulldogs out of the end zone to preserve a 38-35 victory on Saturday night. … Georgia quarterback Hutson Mason was called for intentional grounding on first down to set the Bulldogs back. Gurley managed just three yards on second down and Mason’s pass toward the end zone was tipped at the line by Surratt. That’s when the usually reliable Marshall Morgan, who had set an SEC record with his 20th straight field goal earlier in the game, missed right from 28 yards away …

Turns out the South Carolina game was just a prelude. After that Florida game — after Georgia had bounced back into title contention only to get completely run over in the most inexplicable way possible — I knew.

Oklahoma’s year was even worse. It was full of preseason hype (the Sooners were ranked no. 4 coming out of the gate), but crashed with heart-wrenching losses at TCU (37-33) and against Kansas State (31-30). An embarrassing blowout at home (Baylor, 48-14) killed their playoff chances for real, before an OT loss at home to Oklahoma State twisted the knife at the end.

So what happens now? If Richt’s team looks great for 90 percent of the season but finishes second in the SEC East again, does everyone in Georgia just lose their mind? Does this cycle ever end? Do Oklahoma fans just have to accept that Baylor and TCU are better programs now? Baylor outscored Oklahoma by 63 points over the past two years — that can’t keep happening, can it? Even the Sooners’ 11-2 2013 season came with a loss to an unranked Texas team that derailed their title hopes in October.

I’m not saying Stoops or Richt will get fired. There aren’t enough great alternatives to justify getting rid of coaches who are consistently this good. Look at the rivals of these schools — Texas and Florida — to see just how dark the timeline can get. Georgia and Oklahoma are nowhere near that nightmare. The Bulldogs are a top-10 team and the Sooners are ranked in the top 20.

Fans have been getting restless for a few years now. This feels like the season when either that restlessness becomes outright hostility or these coaches bounce back and everyone pretends they had faith all along.

That’s the subtext to these Nick Chubb highlights.

(Additional subtext: Are we really calling him Chubbatron?)

All these Samaje Perine touchdowns are no different.

(It’s so nice to have college football back.)

Whatever happens, I’ve got a soft spot for both these teams. Chubb and Perine are two of the best running backs anywhere, Isaiah McKenzie will be even more fun at Georgia in year two, and Dede Westbrook is a junior college transfer for Oklahoma who’s destined to be a superstar on name alone. I’m not giving up hope.

Georgia’s season will be decided in October, when Richt leads the Bulldogs through the gantlet of Alabama (home), Tennessee (road), Missouri (home), Florida (scene of last year’s apocalypse). The Sooners will be tested on the road against Tennessee in Week 2, but regardless of happens there, they’ll have a chance to run the table at the end of the year with Baylor, TCU, and Oklahoma State in the final three weeks. Are the odds against them? Of course. But that’s what makes it fun to believe in Chubbatron and Optimus Perine and everyone else. The weather can’t stay 40 degrees forever.

Hyperbole in Spandex: Your Primer for Sunday’s Blown-Out ‘SummerSlam’