Say Hello to the Bad Guy 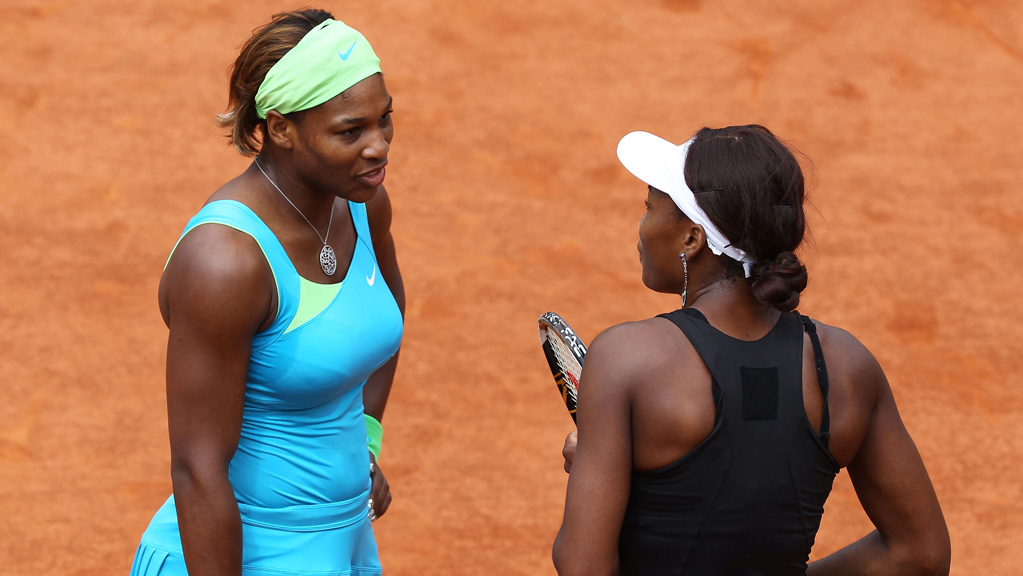 What does it matter what you say about people? After days of hype surrounding their probable third-round meeting in the French Open, Venus and Serena Williams both lost in the second round yesterday, Venus to the 56th-ranked Slovakian player Anna Schmiedlova and Serena to the 35th-ranked Spanish Venezuelan Garbine Muguruza. Schmiedlova and Muguruza are 19 and 20, respectively; the Williams sisters’ combined age is 65. Serena’s loss, at 6-2, 6-2, was her worst ever at a Grand Slam. “The soul is healed by being with children,” Dostoyevsky wrote in The Idiot. He wasn’t talking about big-time professional tennis.

So welcome to a preview of a match that will never take place. I’d been thinking about the possibility of another Venus-Serena clash in a major ever since the draw for Roland Garros was announced. This one would have been the first since the 2009 Wimbledon final, a match that now plays like a time capsule. Venus was the two-time defending champion back then and hadn’t lost a set at the All England Club since 2007. Serena beat her, though, 7-6(3), 6-2. Afterward, Serena wore a shirt with “Are You Looking At My Titles?” printed across the chest in bright orange Dr. Seuss lettering. “This T-shirt is available in stores, if you guys want to go and get one,” she joked. Ben Stiller sat in the royal box; that’s how long ago this was.

My mind kept circling back to that match this week, and to the rivalry in general, if rivalry is even the right word. That was the last time Venus reached a major final. That the sisters’ trajectories have diverged in the last few years isn’t exactly news. Serena has won two Wimbledons, two U.S. Opens, an Australian Open, and a French Open since 2009. She has revitalized her career and embarked upon a period of pitiless world dominance. Venus has struggled with illness and drifted out of the top 20. Serena went 78-4 last year. Venus was healthy enough to play 26 matches, and lost 10 of them. So it’s not as if a third-round French Open encounter would have been likely to go down in the annals of heroic deeds. Venus would have been mowed to the ground in two quick sets and no one would have remembered Serena’s T-shirt.

Still, though. There’s something about the Williams sisters that remains fascinating after all these years — about their relationship, I mean. How they seem to exert this orbital pull on one another. How each still defines our understanding of the other’s career. Maybe the other’s whole self. You probably knew people in high school who were so close that now, when you hear something about one of them, it wakens the other’s shadow in your mind, even if they went separate ways years ago. Stephanie just moved to Phoenix; I wonder where Laura is living? It’s like that with Venus and Serena. As dumb as this probably is, you want to feel that their bond has something to do with you, something to do with their era of women’s tennis. This was the world when we were young. They’re still close, at least judging from Instagram and the frequency with which Venus shows up to cheer in Serena’s player’s box. It’s only their careers that have gradually drifted apart.

[protected-iframe id=”b95d8748fa6be92840d4cf0aaaa0ea3c-60203239-59774278″ info=”//instagram.com/p/oebu5XMTJO/embed/” width=”612″ height=”710″ frameborder=”0″ scrolling=”no”]Well, what does it matter what you say about people? I kept thinking ahead to the match I thought they would play this week because I wanted it to tell me something about them, about where they are now or about what they’ve meant to each other or about what they’ve meant to me. I don’t know, something. Just seeing them on the court together seemed like it would be a big deal. I’d watched them play doubles from about 20 feet away at the U.S. Open last year, but that’s not the same. Venus and Serena aren’t the Bryan twins. They’re competitors. They’re trying to beat each other, even if there have sometimes been questions about whether that’s really true.

The thing is, though? The match wouldn’t have told us much. Probably not anything. There are only two ways by which you can know an athlete: by conjecture or by believing what she says about herself. And when you’re dealing with a relationship as long and close and complex as the one between the Williams sisters — well, do you trust yourself to imagine yourself all the way into it? (Based on what? Body language between serves?) Do you trust them to tell you the whole truth about it? Would you, if you were in their place? Serena recently called Venus “essentially the love of my life” — she was talking about how hard it was, playing matches against her sister — and I believe her. But what a complicated love it must be.

You think about them, for instance, as little kids in Compton. Riding around in their parents’ yellow VW bus, back and forth between school and the tennis courts. They had three older sisters, but Venus and Serena were a twosome, the daughters chosen from birth to be made into superstars. Up every day at 6 a.m. to practice with their parents. Their dad, Richard, was the obsessed one; it’s easy to write him off as crazy, and too often that observation has carried the whiff of racial coding. Which still doesn’t mean he was entirely sane. He’d plant signs in the front yard to instill messages: Serena, You Must Learn to Use More Top Spin on the Ball. If Venus brought a doll home, he’d rip its head off to keep her from thinking about motherhood. Six a.m., every day. Neighborhood Crips watching them practice. The story goes that the girls were taught to lie flat on the court when they heard gunfire.

You think about that, then think about being inside it, living it — 5, 6, 7 years old, being groomed for greatness every minute of your life. Possessing mind-bending talent, and — by a spin of the cosmic roulette wheel — entering the world under the weighty thumb of a mad scientist determined to cultivate it. Knowing that there’s only one other person in the world who really gets what your life is like, only one other person to whom this is normal, and that’s your sister, against whom you are also being trained to compete. Your sister is being trained to be tough, so you have to stay tough too. To keep up with her. To oppose her. Your forehand had better match her backhand, because there’s no room for weakness on Richard Williams’s court. The person you most identify with, the person most equipped to understand you, is also, in a way that’s probably not acknowledged at the dinner table but that you must feel nevertheless, your greatest threat. And that’s true both within the family and, because you’re so talented that it kind of renders every other level of competition moot, in the world outside.

And flash forward from there. Think about what your dreams are like, at 9, 10, 11 years old — what you see when you look forward. There’s room for two superstars in tennis, but there are only so many trophies. You’re going to be gracious when your sister wins a tournament; you love her, you want her to succeed. But you’ve been brought up to look at winning as oxygen, and when your sister wins, you’re left taking shallower breaths. You’ve been raised to perform one mission, and when she wins — again, the person you love more and know better than anyone else in the world — it means you’ve failed.

Think about that, and then consider: Venus and Serena met in their first Grand Slam final in 2001, when Venus was 21 and Serena was 19. They met in three Grand Slam finals — three! — in 2002. Two more in 2003. All told, they’ve played against each other in the finals of majors eight times. Serena has won six of those meetings.

It’s been weird when they’ve played. All those rumors about their dad picking the winner beforehand — those have always been ridiculous. But especially early in their careers, their matches tended to feel … off. Squeamish. Their games slid off each other like magnets turned the wrong way around. You can analyze this in a million ways; the most popular interpretation has always been that Venus struggles against Serena because, as the older sister, she hates seeing her baby sister lose. That may be true. It’s hard to shake the sense, though, that there’s something fundamentally mysterious going on when you watch them play each other. Even in the more recent matches, there’s something that keeps you out. I think that’s why the rigged-outcome rumors have persisted. Confronted with something unknowable, people will always invent explanations. Ancient Sumerians dreamed up star-deities; tennis fans, confronted with a similarly confounding problem of existence, wound up with Richard Williams, match-fixer.

What I’m getting at here is that rather than letting us into their relationship, Venus versus Serena has typically been an occasion where the relationship closes in front of us. The drawbridge just comes up. You get the feeling that something is happening, maybe something wrenchingly dramatic. They know what it is, but no one else does. There’s so much history between them, so much background; tennis must almost be like a private language, the kind that some twins speak. We talk about “history” between athletes like it’s something that can develop from five or six high-stakes contests. But imagine if Federer and Nadal had grown up in the same orphanage. That’s what it was like, at least before Venus’s decline. There’s just nothing in sports to compare it to. There’s no apparatus.

I kept thinking about their possible match this week because I wanted to understand them better. But empathy only gets you so far in sports. It’s the key to the whole business — you see someone jump and you can almost imagine what it’s like to jump that way too. It’s also the quickest path to total irredeemable bullshit — you want to inhabit your favorite quarterback-avatar so intensely that you let drive-time talk radio elucidate him for you. Whatever Serena and Venus have meant, to tennis or to me or to the world, something about their relationship will always resist explanation. We weren’t there, and we never will have been. Sometimes it matters what you don’t say about people. Not watching them play this week may have brought us closer to the truth than watching them play ever could.