Czech Marks: The Nation That Would Conquer Women’s Tennis 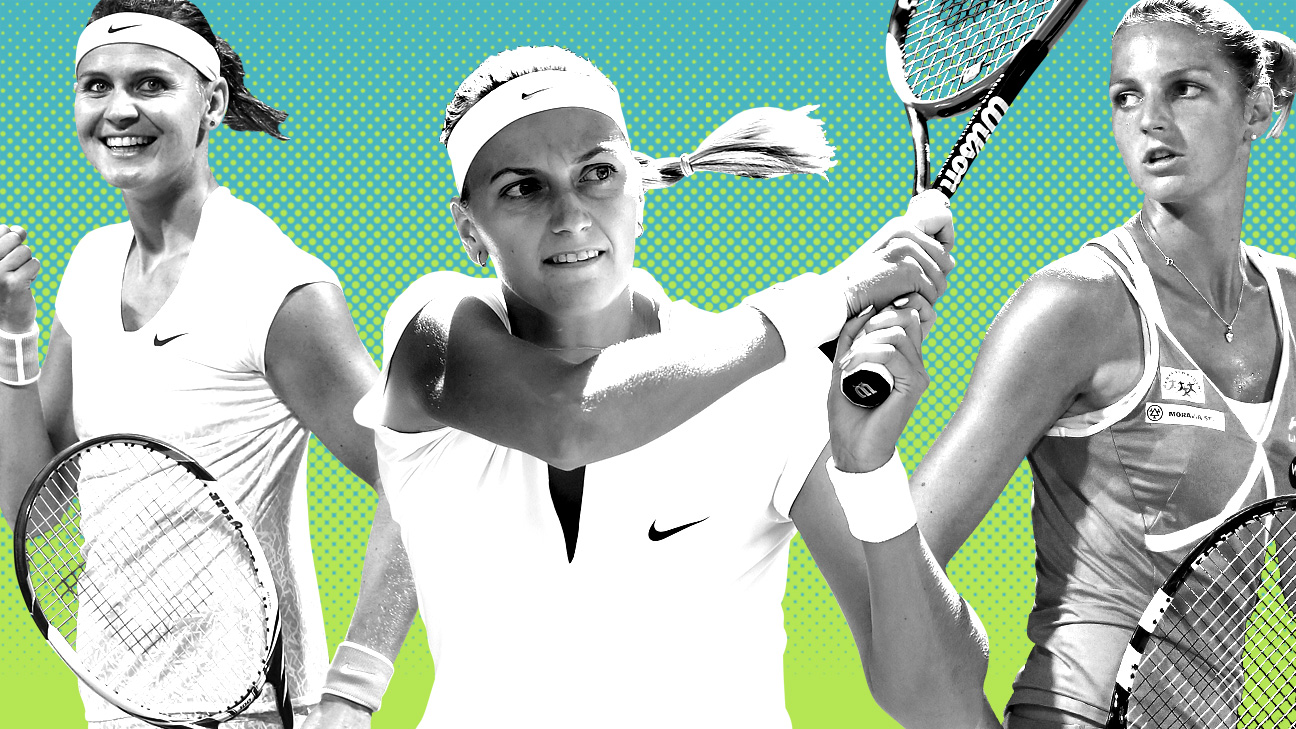 Petra Kvitova, the defending Wimbledon champion, is an agent of chaos. She can be nearly perfect or perfectly awful. She can throw down flat aces and crazy kick serves, or double-fault four times in a row. She can create sharp angles and hit the back line, or she can soar her shots into the stands. She has finished matches with a total of three unforced errors; she has finished with 65. She demolished Maria Sharapova to win the 2011 Wimbledon final and then, eight weeks later, lost in the first round of the U.S. Open. Her results have been more consistent since then, but not by much. She plays so many three-set matches that her nickname has become P3tra.  The only predictable thing about her game is its unpredictability.

Her look of shock has become as familiar as the cloud of chalk that rises when her forehand skids along the line. She’s shown it a thousand times. She will hit a screaming serve and then a first-strike groundstroke, setting up an easy winner. Then she will sail it long or wide. Sometimes she’ll squawk, a strange and unfortunate threatened-chicken sound. Her pale eyes, clear as water, will widen as she stands still and stares at the spot where the ball was meant to go. The danger is always there that the disbelief will deepen into doubt.

She should win every match she plays. On Tuesday, she routed Kiki Bertens 6-1, 6-0 in 36 minutes — the second-shortest women’s match this year. Kvitova doesn’t have to lift her game too much in order to zone. And when she does, she can beat anyone. In Madrid this May, Kvitova beat Serena Williams 6-2, 6-3 to end Williams’s 27-match win streak. Of course, earlier in that tournament, she was taken to three sets by a player named Olga Govortsova, who finished 2014 ranked 145th in the world.

One way to understand the state of women’s tennis these days is to divide the tour into Serena Williams and everyone else. This makes sense: When Serena wills it, Serena will win. In the past three years, she has won seven major titles; no other player has won more than two. But another way to think of things is to think of the Czechs.

There are nine women in the top 100 from the Czech Republic, a country with roughly half the population of the greater New York metropolitan area. Two of them, Kvitova and Lucie Safarova, are in the top 10. Had Karolina Pliskova won one more match in Birmingham last month, she would have joined them.

They have differences of style, background, and demeanor. Kvitova has a small-town shyness, while Safarova is so friendly that when she made a run to the French Open final, other players gathered around the television to watch, rooting for her warmly. Pliskova’s on-court attitude, on the other hand, is so unemotional that after letting a first-set tiebreak slip away, she appeared vaguely abstracted even when she threw her racket in her second-round match against CoCo Vandeweghe. They are at different stages in their career. They don’t share coaches, and they consider themselves competitors. They smile, but they don’t discuss strategy.

But Kvitova, Safarova, and Pliskova do share some things: abundant talent; lionlike eyes; a tennis heritage that includes Martina Navratilova, one of the greatest players of all time, who produced 57 major titles during her career. (“I would be here for hours, talking about them,” Pliskova told me.) They share dinners during Fed Cup, which they often win; a common language; and camaraderie in a locker room that some players can find cool. And they share a tendency to break brackets. 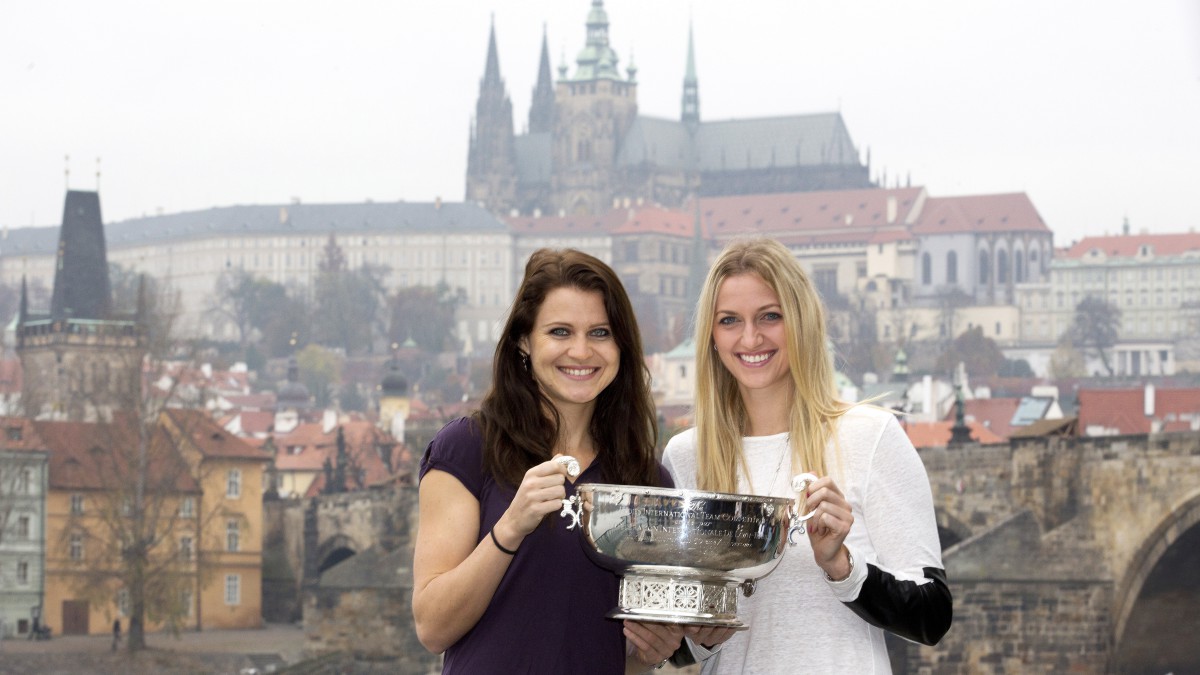 ISIFA/Michal Ruzicka Lucie Safarova and Petra Kvitova in front of the Prague Castle after the Czech team win over Germany in the Women’s Fed Cup 2014 final.

They are works in progress. At 23, Pliskova is a yearling, all long limbs and promise. For years, she had trouble with the transition from being a junior, feeling the weight of expectations, struggling to adjust to the pace forced by the top players. At 6-foot-1, she has always had a weapon for a serve, but she moved languidly and sometimes stooped instead of got low. She was a solid player but not special, best known for having a tennis-playing twin.

But her game came together. Her movement has improved, her groundstrokes have become explosive; she hugs the baseline, cuts off corners, and looks to leap on any easy ball in the center of the court. She goes for lines and can hit them, her looping stroke producing fast, sharp darts.

With a game well suited to grass, she was my dark-horse pick this year — until yesterday, that is, when she lost to Vandeweghe, an American with a big serve for a weapon but not much more. There were missed opportunities for Pliskova — leads that escaped her, missed first serves, moments when she might have put a return in play and instead ripped it out. She should have made the tournament’s second week. Instead, she didn’t make it through the second round.

Safarova is at the other end of her career. She is 28 years old; she has been on tour for nearly 13 years. For a long time, her success was “up and down,” she said after winning her second-round match yesterday. “I didn’t have stable results.” There were injuries, and then there were doubts. She developed a reputation for a strong attacking style and a somewhat fragile psyche. But a new coach, Rob Steckley, has brought consistency. They have tweaked her game, moving her contact point on her backhand and working on her net play. They have goofed off, taking the pressure of winning while delighting in deep runs. Safarova made the semifinals at Wimbledon last year, where she lost to Kvitova, and then stormed through a tough French Open draw this year before running into Serena in the final. It’s hard to imagine her winning Wimbledon. But she is like Kvitova: Who would want to face her now?

You could find this kind of mercurial play maddening. It’s hard not to roll your eyes when you hear Kvitova chirp as the ball sails long. Imagine if she played her best, day in and day out. Imagine if she were a true rival for Serena. Imagine where tennis would be now. It’s hard, too, not to wonder if Pliskova can translate her success on the WTA to success at majors, to wonder whether the setbacks are just growing pains. It’s hard not to wonder if Safarova can sustain her recent stability.

You could say this is the problem with women’s tennis: It’s too unstable. You could suggest that its results lack meaning. A lot of people would agree with you. One wants to be reasonable, rational. This is Wimbledon, after all — umpires in jackets, a hawk hunting mice; tradition, order, birthrights. The only doubt allowed is Rudyard Kipling’s exhortation to brush men’s doubt aside.

Look at a bracket. It’s Serena or bust. And yet — give me errors and winners, collapses, gritty sets, transcendent victories, the prospect of chaos. Give me the Czechs.