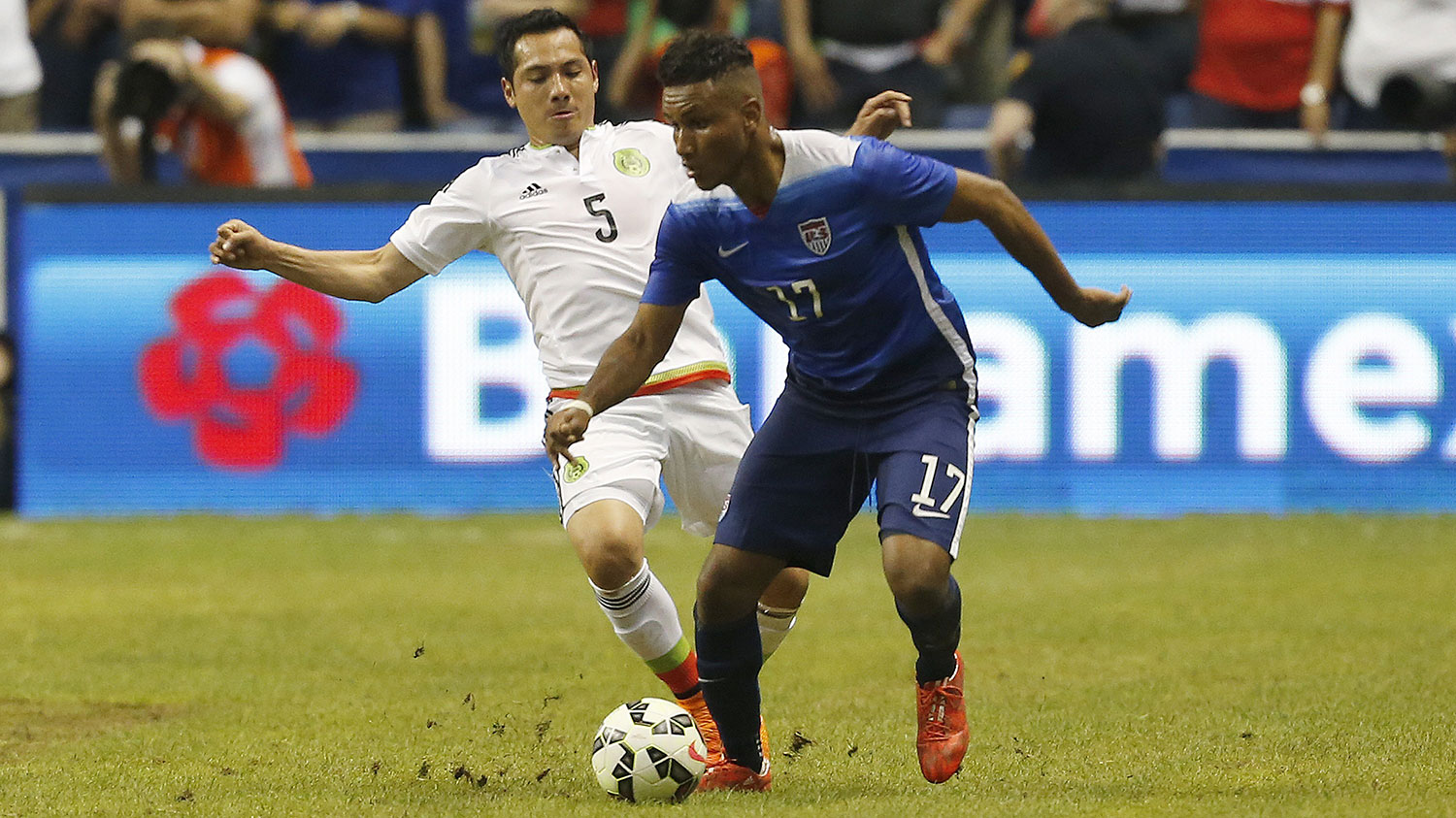 Nearly five years ago — a month before he became the youngest player to score for the senior national team, before he would earn almost 20 caps before his 20th birthday, before he spent a lost year in Europe, before he returned to Major League Soccer and found a home with the New England Revolution — Juan Agudelo1 was a frustrated 17-year-old trying to get playing time with the New York Red Bulls.

Born in Colombia and raised in New Jersey, Agudelo felt hampered in his efforts to show off his on-field flair. He had an imagination on the ball and the technical ability to beat defenders one on one, but manager Hans Backe’s structured system prevented him from doing so. “With the Red Bulls, coaches want to teach me how to play and while I’m playing they try to control me like an Xbox 360 player,” Agudelo said at the time. In other words, he wanted to try shit.

That, however, is an issue when you’re a teenager on a squad that at various points included forwards such as Thierry Henry, Juan Pablo Angel, and Kenny Cooper. Agudelo had the audacity and talent to do this …

… but there wasn’t room on the field for that potential to consistently flourish. Although he made 27 appearances with the Red Bulls (and 14 with the U.S. senior team) in 2011, he made just 13 starts in his three seasons with the team before forcing a trade to Chivas USA in the middle of the 2012 season. After scoring a mere five goals in 26 appearances for the floundering, currently nonexistent franchise, come May 2013 he found himself with the New England Revolution, a club desperate for an injection of offense. He provided, scoring three goals in his first five games before missing a month with a knee injury, only to return with three goals in his next two as the Revs made the playoffs for the first time in four years. He scored frequently and spectacularly:

Like most special young things in American soccer, Agudelo dreamed of Europe’s bright lights (and big paychecks), signing a pre-contract with Stoke City in August 2013 during the middle of his hot streak in New England. He joined the team in January 2014 but surprisingly lost his work permit appeal, so the Premier League club loaned him to FC Utrecht of the Dutch Eredivisie in an effort to get him playing time and improve his chances to win his next appeal.2 With Utrecht, Agudelo scored three goals in 14 games.

“It’s tough going in during the second half of a club team’s season,” he said over the phone. “To get to know the guys when they’ve already known each other for six months. I felt like the transition went well, but it was tough, especially language barriers.”

In May 2014, Agudelo’s second appeal fell through. He and Stoke then “mutually parted ways,” and he set about finding another team in Europe. Reported interest and at least one trial led to nothing. In the movie version of this story, we’re in the montage phase: Agudelo is running across anonymous field after anonymous field, a series of hard fouls are committed by unfriendly faces, a bunch of grim-looking coaches are shaking their heads.

“I can’t get too much into it,” Agudelo said, “but I took about six months out of playing for personal reasons.”

When he’s on form, Agudelo has the same qualities that Arena loved about Dempsey: the willingness and the audacity to try a piece of skill, to go along with the technique to pull it off. The U.S. team, ever-reliant on athleticism instead of imagination, frequently lacks that flair, but thanks to Agudelo’s trying 2014, he went over a year without a call-up.

Through the ordeal, though, he stayed in touch with Revolution management. In January, the Revs signed their former player to a long-term deal, and Agudelo returned to Major League Soccer.

“He’s at the time in his career where the games matter,” said Jay Heaps, New England’s coach and a former Revs defender who has four caps with the USMNT. “Scoring goals, playing consistently is going to be the difference in where he takes the next step.”

Agudelo might have been around the world and back in search of a place to play, but he’s still 22, closer in age to Jordan Morris than Jozy Altidore. He’s 14 months younger than the Los Angeles Galaxy’s Gyasi Zardes, Jurgen Klinsmann’s “young” forward of the moment. He has plenty of time; he just needs minutes.

So far, Agudelo’s second stint with the Revolution looks like a good fit. In fellow forwards Charlie Davies and Teal Bunbury, Agudelo has two older players who experienced quick success only to run into difficult stretches as their careers wore on. He can learn, and the wealth of attacking talent Heaps can deploy should keep the young forward pushing harder to improve.3

Heaps said Agudelo was always the most physically strong striker he had, but he’s playing with a newfound maturity since returning from Europe. “To be so close to a dream and have it taken away for reasons that are pretty much out of his control, that’s difficult,” Heaps said. “He’s reading the game well. He’s putting himself in a good position to defend and to do what we’re doing from a scheme standpoint. That’s something that has definitely come a long way from the last time he was here.”

For Agudelo, things have changed off the field, too. In February, he and his fiancée had a daughter. “I love it,” he said of being a dad. “It’s awesome. I got a lot of things to look forward to after training. I’m excited to run back home.” While he hasn’t given her a soccer ball yet, he joked that he’s making her do squats to get her legs strong.

Happy with his home life and happy with his club, Agudelo only needed to get back in his country’s uniform for his return to be complete. After a Revolution training session in April, he received an email from the U.S. staff requesting that he join the team before the Americans took on Mexico in San Antonio. “I sat in my chair reading through it,” he said, “feeling the same feeling I felt when I was first called when I was 17 by Bob Bradley.”

Agudelo didn’t think he was going to play against El Tri, so he said he pushed himself as hard as he could during the prematch training sessions, treating them like a trial for a club team, desperate to make an impression on Klinsmann and his staff. When the match came, he didn’t start, but he did replace Morris after the hour mark. Six minutes later, Agudelo scored his first goal for the U.S. since March 11, 2011.

The goal showed a mix of the old Agudelo — the confidence and smooth first touch to take Michael Bradley’s pass out of the air with ease — and the new — the patience to take a second to look around, survey the field, and decide how and where to attack.4

“I’m playing a lot more simple: to keep the ball, to not lose possession,” he said. “But there are also times when I wish that I would have taken on that player. That’s my favorite part of football, when the crowd’s roaring, when you’re going at somebody and he’s backpedaling.”

That’s when you try shit.