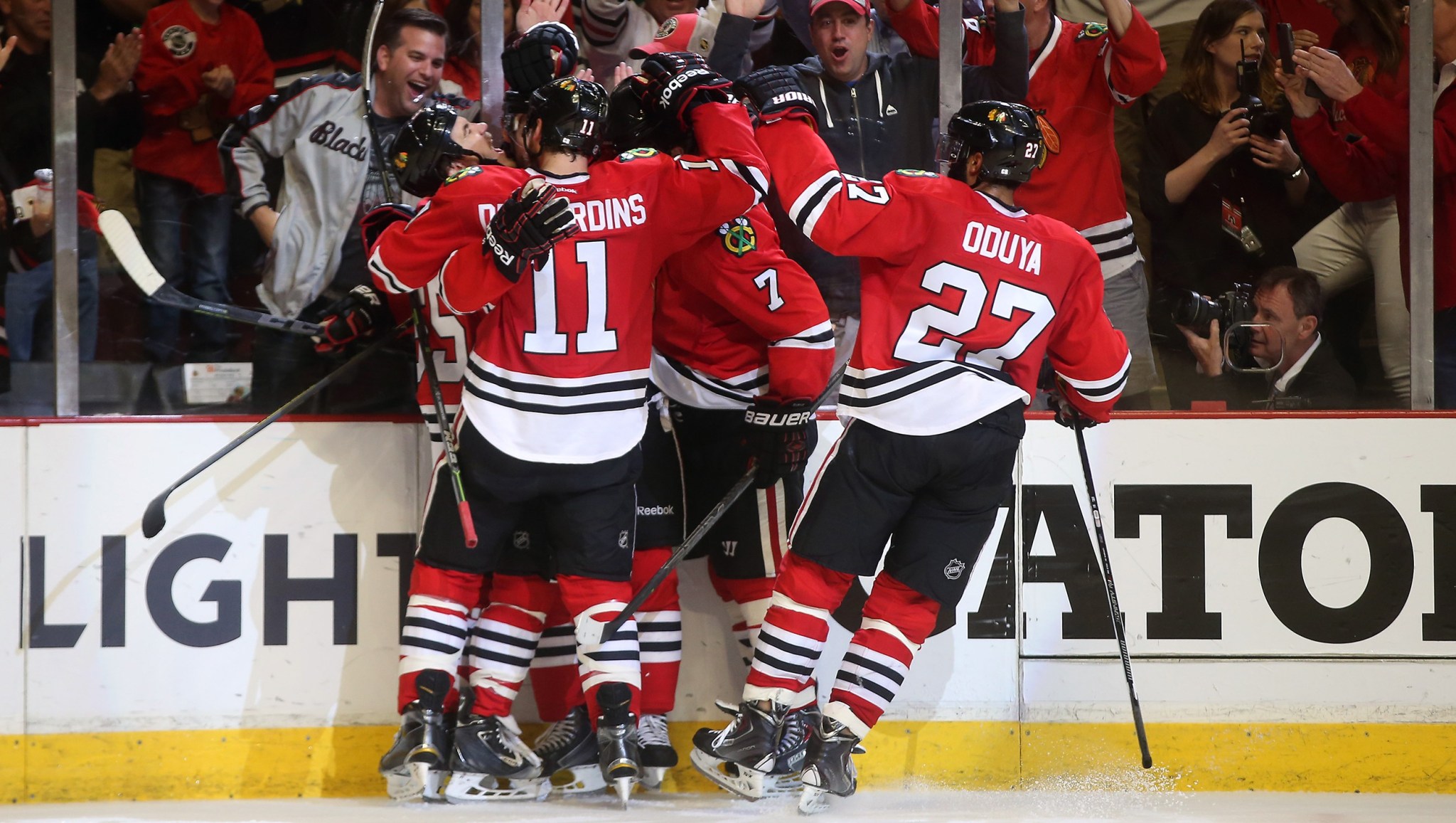 Heading into Game 6 of the Western Conference final last night, the Anaheim Ducks held a 3-2 series lead, making it impossible not to watch the game without thinking that this might be the end of the Blackhawks.

Not the end of the Blackhawks’ 2015 season, mind you. That wasn’t the source of the drama. It was the realization that had the Ducks eliminated Chicago on Wednesday, they would be finishing off the Hawks for years to come. Finishing off the team that has spent the past seven years winning two Cups, going to five conference finals, and generally being just about the closest thing the league has seen to a dynasty in the salary-cap era.

Those Blackhawks are a brilliantly constructed team, but their pending cap crunch has been an inescapable subplot to their postseason. The question, never quite front and center but always just under the surface, has followed them all spring: Is this finally their last run? Last night, with the team facing elimination for the first time this year, everything that happened carried the weighty possibility that we were seeing something special for the last time.

You thought it when Hawks forward Brandon Saad finally scored the opener, midway through the second period after a lackluster first in which Chicago was outshot and largely outplayed. A harmless-looking play suddenly turned into a breakaway, and Saad snapped one past Frederik Andersen between the legs. The United Center erupted, Saad was mobbed by teammates, and you wondered how the heck the Blackhawks are supposed to get this guy signed when he hits restricted free agency this summer.

You thought it again when Marian Hossa made it 2-0 just three minutes later, and you wondered just how much his heavily front-loaded contract, which stretches until he’ll be 42 years old, will handcuff this team in the years to come.

You thought it when Patrick Kane trickled a shot past Andersen after a beautiful individual effort, which I am linking to here not so much for your benefit but just in case Matt Beleskey is still trying to figure out where Kane went. That one came just two minutes after Hossa’s goal, made it 3-0 for Chicago, and reminded you that both Kane and Hawks captain Jonathan Toews have new deals kicking in this summer, ones that give them the league’s two highest individual cap hits. They’re fair deals, and other stars will catch up and pass them soon enough, but, man, will they eat a big chunk of cap space.

You thought it as Duncan Keith was putting up three assists while logging 28:35 and saving goals in his own end, and you looked at the eight years left on his deal and … well, and you thought Duncan Keith is a beast. Sorry, I can stretch this whole concept only so far. Keith’s deal will look bad someday, but last night he was a bargain at any price.

But you had to keep thinking about the future of these Hawks, whether you wanted to or not. Brent Seabrook played his usual solid game on the second pairing; how do you get him the extension he’s eligible for this summer? Andrew Shaw scored the insurance goal to make it 4-2; he should be in for a nice raise after next season too. Corey Crawford made 30 saves for the win; is it completely crazy to think that maybe he’s the guy they should trade?1

You wouldn’t think this way about most teams. Most teams make the playoffs, eventually lose, and go home, and nobody really offers up much sympathy because that’s just how the playoffs work for the also-rans. And you certainly wouldn’t think it about the Ducks, seemingly poised to be back here next year and beyond because of their young talent and solid cap situation.

But the Blackhawks, yeah, you can’t really escape it. Hell, you even had to think it during the pregame pump-up video that welcomed them to the ice. It’s brilliant, a chill-inducing production that juxtaposes the players from the current roster with the stars of the franchise’s past, and it’s a reminder of just how long this team went without a championship. Fans in Chicago waited 49 years for a Stanley Cup, many of those seasons agonizingly ordinary, some utterly without hope. Nobody ever really deserves a dynasty, but these guys at least come close. And they know as well as anyone that once something slips away, it can take a very long time to get it back.

It wasn’t always like this. For decades, more than any other pro sports league, the NHL was a league of dynasties. You had the Maple Leafs of the early ’60s, the Oilers and Islanders of the ’80s, and the Canadiens of, well, just about every other era. That had faded by the first decade of the Gary Bettman era, but teams like the Red Wings, Avalanche, and Devils still dominated, combining to win eight of nine Cups from 1995 to 2003.

The 2005 lockout changed that. In the decade since, there’s yet to have been so much as a repeat champion, and only a handful of teams have been able to put together more than a few seasons as top-tier contenders. The salary cap is the biggest and most obvious reason, although revenue-sharing and liberalized free agency help too. Even beyond the rule changes, the gap between the league’s smart teams and the patsies — which used to be huge — has been narrowing for years. With so much information available to anyone interested enough to look for it, the margins for competitive advantage have grown smaller and smaller.

And this is what we all wanted, or at least it’s what the NHL seems convinced that we did. The league has gone to great lengths to tout this new era of parity. Playoff races are tighter than ever, we’re constantly told, and the loser point assures that almost everyone finishes over .500. In today’s NHL, your favorite team is probably good, and if you squint hard enough it could probably even win the Cup sometime soon. And if there’s a better team blocking its way, don’t worry — the salary cap will drag it back down into the bucket with the other crabs soon enough. In the brave new NHL, the fierce pull of mediocrity is a feature, not a bug.

And in this new world, the Blackhawks have been the annoying kid who takes too long at the drinking fountain. In the seven years since they emerged as a contender, their worst season was 97 points. Despite playing in the league’s toughest division, they make the playoffs every year, and almost always go deep once they do.

Granted, these aren’t exactly the early-’80s Islanders winning 19 straight series. Words like dynasty and dominance are relative terms these days. But only two other teams, the Red Wings and Penguins, have even made the playoffs for seven straight years, and both have been teetering on the brink recently. Not the Hawks. They just keep winning. Move it along, kid, there’s a line back here and we’re all thirsty.

Reality says we won’t have to wait long. All told, the Hawks already have more than $65 million in cap space committed to just 14 players for next year.2 You can slice the math however you want, and it just doesn’t work. Something has to give, and sacrificing a fourth-liner here or there won’t cut it. They have to break up the band. That’s how this is supposed to work.

This is all familiar territory for the Hawks, of course. Back in 2010, after they won their first Stanley Cup in this era, they faced a similar salary-cap crunch and had to offload players like Andrew Ladd, Antti Niemi, and Dustin Byfuglien3 for draft picks and futures. At the time, it was considered the starkest example yet of the power of the cap to weaken a good team, and for two years it did — despite strong regular seasons, they lost in the first round in both 2011 and 2012.

And then they were back, winning the Cup again in 2013. They almost won it last year, too, losing to the Kings in overtime of the seventh game of a thrilling Western Conference matchup that most treated as the de facto Cup final. They might just win it again this year.

This is not how it’s supposed to work. This is not what we’re supposed to want. The league has promised us parity and, dammit, we will have our parity if Bettman and friends have to get out there and start tackling people.

And maybe that’s a good thing. If you cheer for a team like the Blues or the Wild, you’re probably counting down the seconds until you don’t have to go through the Blackhawks to get out of the Central. But one has to admire what they’ve done in Chicago, and it’s hard not to want to see it continue. Dynasties are kind of fun, after all. Even the watered-down versions.

Last night, the Ducks came back from that 3-0 deficit, cutting it to 3-2 early in the third. Then they dominated most of the period, which at one point featured eight straight minutes of hockey without a whistle. But they couldn’t beat Crawford, and Shaw’s goal with less than four minutes left all but sealed the win. When he added another, this time into an empty net, it was all over. The game, that is. Not the Blackhawks. Not for one more night.

And now the series comes down to a seventh game, which, all things considered, is exactly where it should end. There’s just not much to choose from between these two teams. They’ve alternated wins all series. We might as well play winner-take-all.

“I think as a hockey player, you want to talk about the cliché of growing up as a kid, playing on the backyard rink, pretending you’re playing that Game 7,” Toews said after the game, sounding exactly like a guy who’s done this before. “Again, we can resort to our experience in these situations and just feel confident … Fate’s on our side. We’ll find a way to make things happen.”

And maybe they will. But if it has to end, at least let it be in a Game 7. They’ve earned that. That would be the ending they deserve after all of these years; let them go out on their shield.

So let’s all agree on that. Let’s root for the Blackhawks to put up a good fight, lose Game 7, and finally be broken into enough pieces to send them to the back of the line.

Someday. And maybe that someday is Saturday. But it’s fun to think about what comes next if it’s not.