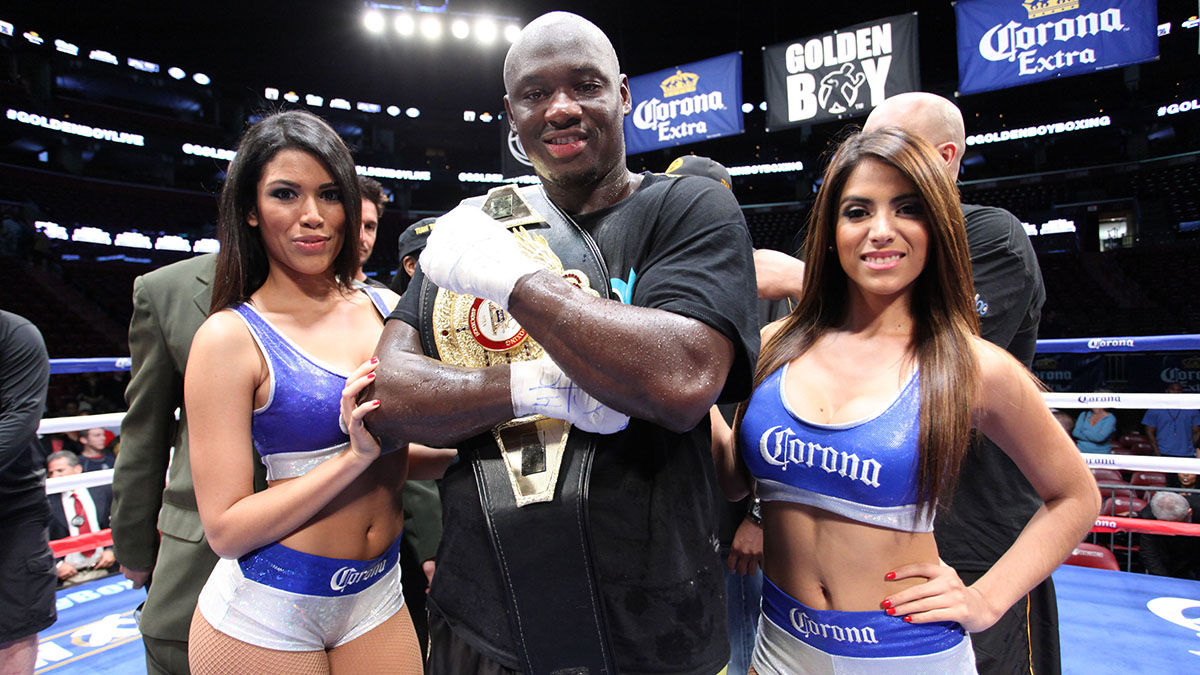 On April 11, shortly before Premier Boxing Champions went live from the Barclays Center in Brooklyn, two ring girls hit the buffet line in the pressroom. They wore sparkly white Corona shorts and sparkly blue Corona bras, and their tans matched perfectly, like a terra-cotta glaze. During boxing matches, they carried numbered cards around the ring, alerting fans to the upcoming round while the fighters rested in their corners. Backstage at Barclays, they carried paper plates past lukewarm trays of salmon piccata and chicken marsala.

“Shouldn’t you be out there?” someone asked. The first televised fight, between middleweights Peter Quillin and Andy Lee, was about to start on NBC. The women shook their long, dark hair extensions. No, they were done for the night. Al Haymon, the shadowy businessman behind PBC, had eliminated ring girls as part of his plan to bring boxing back to network television. The Corona duo worked the undercard, but their night was over once the cameras rolled. When PBC returns to the Barclays Center on Friday with a fight between Amir Khan and Chris Algieri, the ring girls won’t be included on the Spike TV broadcast, but they can at least look forward to another free dinner.

There have been other casualties of PBC’s simplified format, including the ring announcer and boxers’ ring-walk entourages, which had swelled over the years into second-line parades. In purging the ring girls, though, PBC was doing more than conserving oxygen. It was making a statement. “There are no ring girls. #Evolution,” the company tweeted during its March 7 premiere on NBC. The hashtag was especially bold because PBC, which has also inked deals with CBS and ESPN claimed elsewhere to be “taking boxing back to its roots.” #Evolution suggested that the disappearance of the ring girls wasn’t just better programming. It was a step forward for the human race.

@PBPJeff There are no ring girls. #Evolution

Wasn’t it just a little unfair, though, to single out the ring girls for #Evolution? Boxing is unapologetically primitive, after all: Its athletes dole out brain damage to satisfy its fans’ baser instincts. PBC turned down an invitation to elaborate on the tweet, letting #Evolution stand on its merits. The announcement came at a time, though, when people were scrutinizing Floyd Mayweather Jr.’s long rap sheet of domestic violence. Was this how boxing put on a friendly face for women?

Whatever the case, the development could have easily been lost on the casual boxing fan who has never attended a live event. The two heavyweights of TV boxing, HBO and Showtime, rarely show the ring girls (who some boxing hands call “round-card girls”) on television, cutting instead to the fighters’ corners between rounds. “Some of the greatest moments in the history of the sport happened between rounds,” said Ross Greenburg, the former president of HBO Sports. Think of Angelo Dundee imploring Sugar Ray Leonard to come back against Tommy Hearns after the 12th round, or the mysterious bottle that rejuvenated Aaron Pryor in his first bout against Alexis Arguello. And the ring girls? “We basically ignored them on television,” Greenburg said. “There was something a little bit off about putting round-card girls on TV. It just felt demeaning to women.”

The network never went as far as PBC, though, in eliminating ring girls from televised fights altogether. “I don’t know if that would be an evolution so much as ignoring a longstanding tradition,” said Kathy Duva, CEO of the promotions company Main Events and one of the most powerful women in boxing. Ring girls have been a part of the sport since the 1950s, when casinos in Las Vegas flaunted their showgirls between rounds. “Nothing sells like sex and violence, so boxing and round-card girls made sense,” said longtime ringside analyst Larry Merchant. Before women, promoters often used children to carry round cards. Fans clearly preferred the women, even if some television channels looked down on the practice. The ring girls still managed to nab some camera time before and after fights by standing near the ring announcer. (Sometimes they crowded in so close it looked like they were sharing the sport’s metaphorical phone booth.) And promoters learned to make an extra buck by selling sponsorship of the women’s outfits at big fights, typically to beer companies like Corona and Tecate. 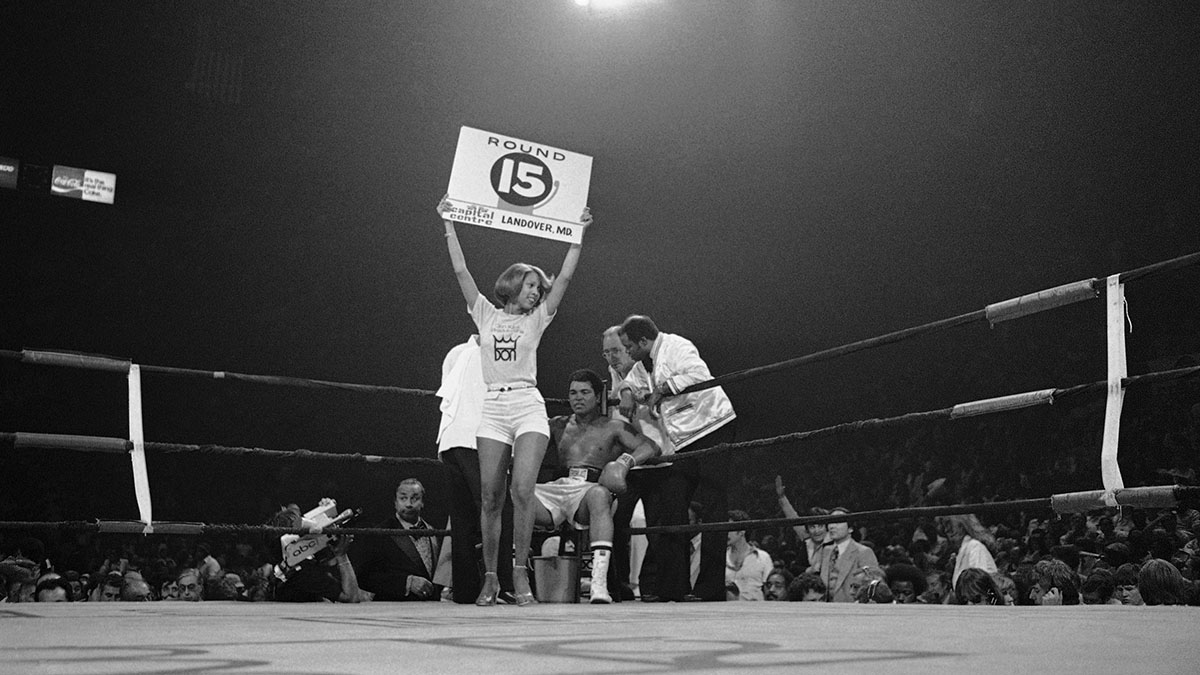 AP Photo Muhammad Ali between rounds in a 1977 bout with Alfredo Evangelista.

“I prefer to call them brand ambassadors,” said Todd DuBoef, the president of Top Rank Boxing, one of HBO’s main partners. A few years ago, Top Rank created a squad of ring girls it called the Knockouts. The women wear cropped blue shirts and hot pants with big “TR” belt buckles. “Not having them would be like the Dallas Cowboys not having the Dallas Cowboy cheerleaders,” said DuBoef. He didn’t want to hear about #Evolution. “That comment is so naive,” he said. “I’m not sure whoever made that comment understands the consumer base very well.”

There were other directions, certainly, that #Evolution could have taken. PBC could have broadcast a fight between female boxers, for instance, or featured a female referee. Either action would have been progress for women in a male-dominated sport. Instead, the ring girls have been chowing down on buffet food during PBC main events. The Barclays pair was clearly disappointed. On Instagram, one of the Brooklyn ring girls tried to rally fans to change PBC’s mind: “If you guys want us on tv tweet @nbcsports and @pbc asking them for us!”

For many models, a ring-girl gig is an opportunity to work directly with a live crowd. “You’re the center of attention every three minutes for 30 seconds,” said Corissa Furr, a model in Los Angeles who has worked fights for Corona. “Sometimes the round ends badly for the favorite guy, so it’s like negative energy. The crowd is booing, and you get up there and you smile and you can change that. You start to get cheers again.”

There are plenty of catcalls, too — occasionally from a fighter’s corner. “I’ve been known to whistle at one in between rounds if the fight is going well for me,” said Paulie Malignaggi, the welterweight boxer and ringside commentator. In November 1971, Don Chargin, a promoter in California, took a young lightweight champion from Los Angeles named Mando Ramos to Madrid to defend his belt. “He actually got a date,” Chargin remembered. “The girl paused in his corner, holding up the card, and in Spanish he asked her, ‘How about having a drink after the fight?’ And she must have said si because he dressed quickly and left.”

Other fighters hardly notice the ring girls at all. “As a boxer, and I think I can speak for the majority of us, we can care less about ring-card girls,” said Sergio Mora, a middleweight who won the first season of The Contender. “We’re there to do a job that involves avoiding pain and serious injury.” With female boxers, the presence of ring girls can be outright awkward. But in the tradition-bound realm of boxing, it can be hard to come up with a creative alternative. “Are you going to have guys carry the cards around?” asked Duva. “I don’t think so.”

Don Elbaum, the old-school promoter who organized Sugar Ray Robinson’s final fight in 1965, said he tried ring boys once, though his memory was hazy. “It was at a girl fight,” he said, closing his eyes and folding his hands before his nose. “I have an image now. Two guys. I think it was Akron, Ohio. That would be 20 years ago. Good-looking guys, shirts off.” It was, apparently, more #Evolution than fans could handle. “I didn’t like it,” Elbaum said. “It did not go over well.”