We Went There: The Darkness of Defeat in the Tampa Bay Locker Room 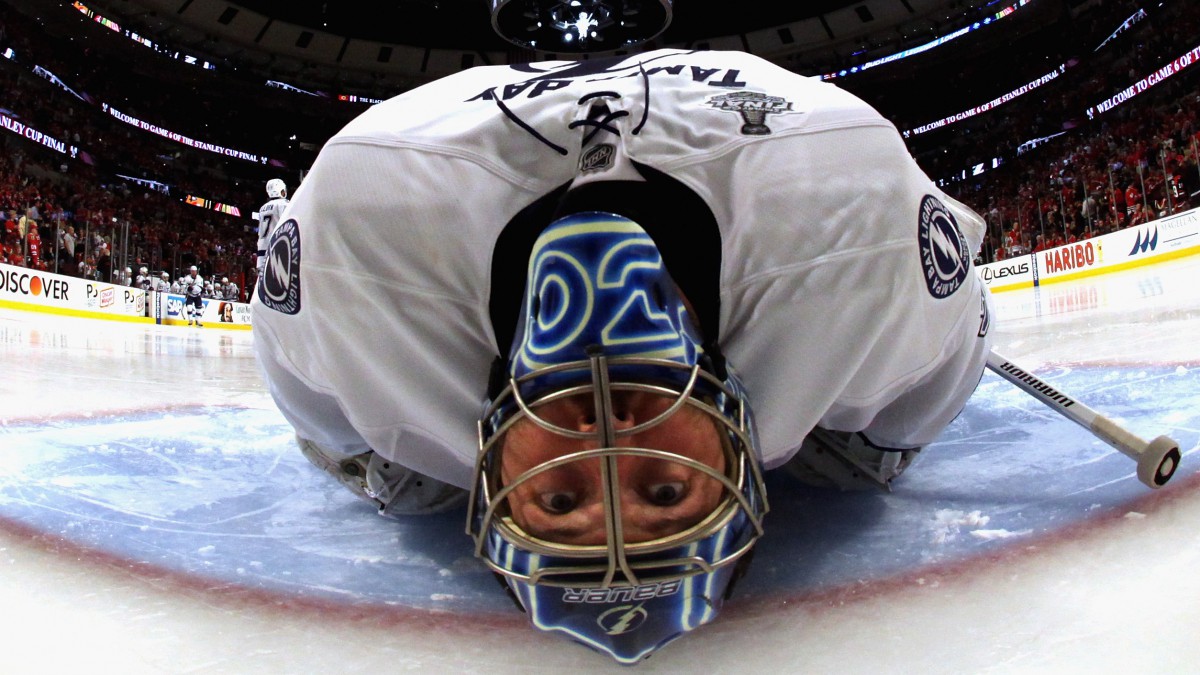 Whether it’s a college roommate’s stereo or the adjacent room in a hotel, no one ever wants to listen to someone else’s loudly muffled music playing through a shared wall. But those late-night annoyances are trivial compared to the heartbreak of sitting stricken in a visitor’s locker room at an arena, having just lost the Stanley Cup, and hearing the unmistakeable on-and-on-and-on-and-onnnnn of “We Are the Champions” being blasted for someone else.

“I feel like we could be on that ice right now celebrating,” remarked Ben Bishop, the Tampa Bay Lightning goaltender who had just made 30 saves in a 2-0 defeat by the Chicago Blackhawks in Game 6.

Playing through a partially torn groin, Bishop regularly stretched his long legs sideways for pad saves that made you wince in secondhand discomfort last night. When he went down to the ice, he needed to use his arms to stand back up. He didn’t let in any goals through 37 minutes, not until Chicago’s Duncan Keith jumped on his own rebound and gave the Blackhawks a 1-0 lead. A season after a Vezina Trophy nomination, and a playoff run that left the Lightning two wins away from their wildest dreams, had ended in physical and emotional pain.

Across the room, circled by camera crews and writers with pained expressions, Lightning captain Steven Stamkos was similarly blunt. His eyes were ringed and red, and they watered. His voice was thin.

“It makes you sick to your stomach,” he said. “We played, what, 26 [playoff games]? That’s a lot of hockey. It almost feels like it’s for nothing. I know it’s not, but that’s what it feels like. You’re playing through so many different things, guys on the team sacrificing … people don’t even have a clue what some guys are playing through and it seems like all for naught.”

Stamkos, who didn’t score a goal in the final, kept repeating that he’d been feeling great that night. He kept returning to all the chances that hadn’t been converted to a championship. That evening alone he’d hit a post and been stuffed on a breakaway by Corey Crawford. His coach, Jon Cooper, said he felt sick for the guy. “I know he’s going to put a bunch of weight on his shoulders of why we didn’t score,” Cooper said. “Nobody scored. It wasn’t just Stammer.”

Jonathan Drouin wept into a Gatorade towel, then balled it up and gnawed on it; he declined through tears to speak to the press. Anton Stralman took off his shirt but stopped there, stunned, his lower pads still on. Bishop put his head in his hands and stayed like that for a long time. Victor Hedman shuffled around the room embracing anyone he encountered, from teammates to lost-in-thought equipment staff. Cedric Paquette sat down on a folding chair, was quiet for a moment, then took off his hat and spiked it on the floor. Most of the Lightning players stayed in the showers, where the water might drown out the nearby sounds of Chicago’s whooping celebration, their third in six years, an embarrassment of riches that frankly seemed unfair.

Out there, the Blackhawks were posing for photos and setting squirmy babies into the bowl of the iconic trophy for moments the kids would never remember but their parents would always have.1 Out there, 40-year-old Kimmo Timonen and 20-year-old Teuvo Teravainen, a pair of Finnish bookends, were joyfully describing the heft of their first Cup. Out there, ice girls were taking selfies and Patrick Kane’s mom was chatting with Scotty Bowman and guys were growing up right in front of everyone’s eyes. The last time Bryan Bickell won the Cup, in 2013, he celebrated on ice with his fiancée; this time, they passed their tiny daughter back and forth. Last time Brad Richards won one, as the MVP with Tampa, in 2004, he was 24 years old. This time around, he was 35.

Brendan Morrow’s career has overlapped with Richards’s almost completely, but with far different results. He was a 21-year-old rookie when his Dallas Stars, a year removed from their Cup victory in 1999, lost in six games in the final in 2000. Now, at 36, it was happening to him again. “I don’t remember 15 years ago,” he said, as a trainer pulled a Lightning flag down from the wall behind him. “I was just young and dumb and thought it was going to happen every time. Now, I’m not sure if this is it, or if I’ll get another opportunity.”

Morrow said that, in a way, some teams need to lose in order to teach them how hard it is to win. But both he and Stamkos acknowledged that the chances to do so can be few and far between, that the required mix of luck and skill and health and youth and leadership is a rare alchemy that’s just so difficult to replicate.

“You never know when you’re gonna have this opportunity again,” Stamkos said, “and [if] you let it slip through your fingers …” He repeated the worry a few minutes later. “When you don’t get it done, it’s tough to say, ‘Oh, we’ve gotten the experience, and we’ve been here now’ when you never know if you’re gonna get this chance again.”

The Blackhawks (and the Kings before them) have proven that no team has to be one-and-done, that there’s a certain snowball effect to winning. But for the guys on the losing end, it’s hard not to look back at the recent second-place finishers, from the Philadelphia Flyers to the Vancouver Canucks to the New Jersey Devils, and note that they never got that far again. The New York Rangers came closest this season, but even they couldn’t return for a shot at the Cup.

That doesn’t mean it can’t be done, of course. Carolina and Anaheim bounced back in the early ‘00s, and the Pittsburgh Penguins returned to the Cup final (and won) in 2009 a year after being runners-up. The Lightning boast one of the NHL’s best forwards in the 25-year-old Stamkos; in the Triplets, the team has a young and formidably simpatico line. Victor Hedman, at just 24, is a guy around whom you’d build a team from scratch. Jon Cooper should have a long career in this league. In addition to Steve Yzerman at GM, the Lightning have one of the league’s most underrated front-office minds in assistant GM Julien BriseBois.

Still, it was impossible for the Lightning not to feel sick to their stomachs, not to rue the past and fret about the future, all while Chicago’s happy present rang noisily in their ears. Queen had ended, and now Avicii had begun. Wake me up when it’s all over, when I’m wiser and I’m older. The tune was upbeat, but the words were perhaps less suited for Chicago than they might be for Tampa Bay. I tried carrying the weight of the world, but I only had two hands. Losing the Cup is far heavier a burden than hoisting it above your head.

This column has been updated to reflect that Ben Bishop’s Vezina Trophy nomination was for last season, not this one.

Lord Stanley Once Again Takes Up Residence in Chicago