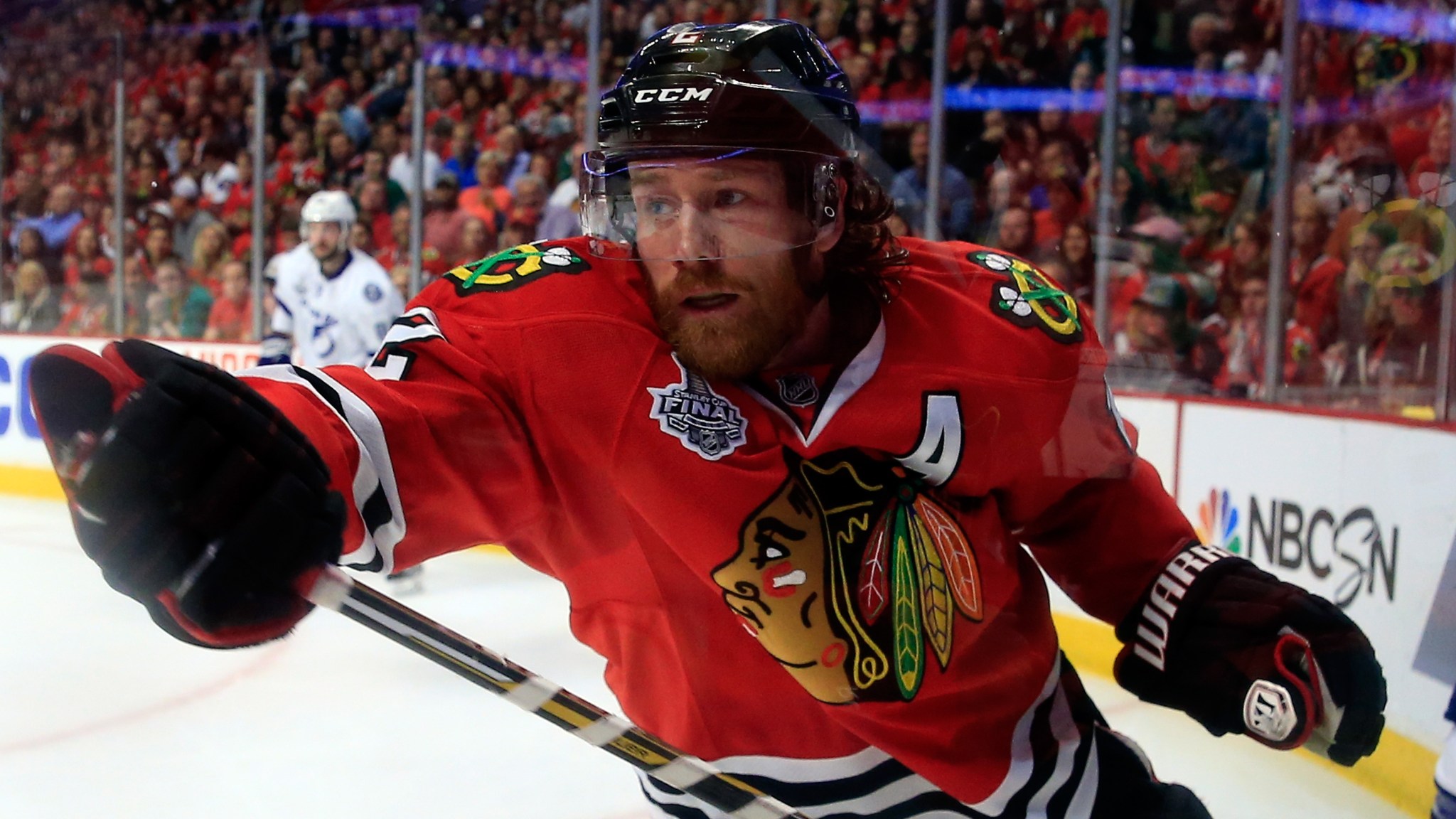 The Three Stars of Comedy From the Last Two Rounds

The third star: This photo

It’s a few weeks old — hey, we haven’t done of these in a while — but it still makes me laugh every time.

Photo of the night… pic.twitter.com/DwjtsXT6uW

The second star: Patrick Kane has a story about Snoop Dogg

Because of course he does. This comes via the NHL’s transcript of Sunday’s media availability. There’s context missing, but just trust me that it’s better without it.

I would 100 percent watch a buddy comedy featuring Patrick Kane, Snoop Dogg, and Spanky or Something.

The first star: Pretty much everything Jon Cooper says

The guy is basically using every pregame and off-day media availability to try out his standup routine. At this point they might as well build an ’80s comedy-club brick wall behind him, because he’s easily the funniest coach in the NHL. Granted, the second-funniest coach in the NHL is Bob Hartley that time he held back a sneeze and almost made a facial expression, but still.

Cooper gets a laugh out of the media pretty much every time he talks. And it’s a real laugh, not the “Uh-oh, Coach McCrankypants is trying to make a funny — better fake it so he doesn’t flip over the lectern and attack someone in the front row” version that you usually see. It’s why pretty much every one of Cooper’s answers in the NHL-provided transcripts ends with the notation “(laughter).” That should be the title of his biography: “(laughter): The Jon Cooper Story.” Call me, Coop. I know a ghostwriter.

The issue: NBC Sports chairman Mark Lazarus said he’d like to see playoff beards disappear because it would make it easier to market the players.

Is it justified? Yes and no. If you love playoff beards, you’re not going to appreciate Lazarus’s comments, especially given that he probably has the ear of the NHL. But remember, as he later clarified, he didn’t call for a ban or demand that the league take action. He just expressed a preference. And from a purely marketing perspective, he wasn’t wrong.

But there’s a bigger problem here. Hockey world, we had been doing so well. We almost made it through an entire playoffs without wetting our collective pants about a bunch of beards. Sure, most of the players grew them, and they were mentioned occasionally. But for the first time in recent memory, the rest of us didn’t seem interested in acting like a few dudes with beards are the most interesting part of the playoffs. There was a noticeable drop-off in “best beards” slideshows. People didn’t seem to feel the need to obsessively tweet their beard power rankings. Playoff beard think pieces were mostly limited to 6,000 words.

We were just one week away from finally having a playoffs without getting stupid about playoff beards. And now this.

Here’s the deal. Like most things in this world, playoff beards were cool when a few people did it and got progressively lamer once they basically became mandatory. They’re harmless fun. They’re fine. But if playoff beards crack your top-five list of things you love about the playoffs, you’re doing it wrong.

So please, let’s ignore Lazarus — not because he’s right or wrong, but because it’s the only way to go back to not talking about a mostly fun yet vaguely overrated tradition that’s much better off when it’s just part of the scenery.

On Wednesday, Kane faced Andrei Vasilevskiy in the first forward vs. goalie matchup between players wearing no. 88 in Stanley Cup final history, which I’m too lazy to verify but feel pretty comfortable going with.

That number has a fun history. Eric Lindros is probably the most famous no. 88 in NHL history. Joe Sakic wore it as a rookie with the Nordiques, as did Owen Nolan. Ken Hodge wore it with the Rangers, and Brent Burns wears it for the Sharks now. But today’s obscure player is a guy who wore it in 1983: tough guy Garry Howatt.

Howatt had a 12-year career and was mostly known as a slugger for the Islanders who took on everyone from Dave Schultz to future Cup-winning coach Randy Carlyle. He won two Cups with the Isles before being traded to the Whalers and then finishing his career with the Devils, which is where he briefly donned no. 88.

Two cool things about Howatt: First, he was once traded for a guy named Merlin Malinowski, which is an all-time great hockey name. And second, he was part of one of the oddest games in NHL history. On January 15, 1983, the Whalers faced the Devils during a snowstorm and two of the game’s three officials couldn’t make it to the arena. Needing two emergency linesmen, the league invoked a little-known rule and forced each team to supply one player to take on the role. That led to Howatt and Hartford’s Mickey Volcan becoming the only active players to ever officiate an NHL game.

Cherry is notorious for mispronouncing names. Lalongo. Beeyeska. Even Jokabe Ellisbry. But surely, even he can nail something as straightforward as “Mike Babcock,” right?

With the Blackhawks and Lightning down to a best-of-three for the Stanley Cup, that means Chicago is just two wins away from its third title in six years. It’s been quite a run, one unlike anything we’ve seen in the salary-cap era. And so today, let’s look back on how it all began — with a dramatic Cup-winning goal that was also unlike anything we’d seen, in the sense that we didn’t actually see it.

• So it’s June 9, 2010, and the Blackhawks are in Philadelphia for Game 6 of the final. Leading the series 3-2, they’re one win away from their first Stanley Cup in 49 years. We’re in overtime, meaning the next goal could be the Cup winner. Assuming, of course, anyone notices it.

• The action starts with the puck deep in the Flyers’ zone. It comes back out to Brian Campbell and he feeds it to Kane, who walks right around a veteran Flyers defenseman named Kimmo Timonen. Man, that guy looked old on that play. I wonder what ever happened to him.

• Kane fires a shot from a bad angle, and we proceed into one of the most bizarre sequences in NHL history. Kane knows it’s in, and he immediately starts celebrating. The referee dodges him but otherwise doesn’t do anything. Goaltender Michael Leighton doesn’t react at all, although that’s standard procedure for Flyers’ goalies on any shot. And in my favorite moment, Chicago’s Patrick Sharp (no. 10) sprints over and elbows confused teammate Andrew Ladd in the head.

• Hockey Night in Canada announcer Jim Hughson has no idea what’s going on, and he’s not alone — just about everyone else calling the game was similarly confused.

• By the time Kane is halfway down the ice on his victory sprint, his teammates have figured out what’s up and pour off the bench to join him. The only one who still looks confused is goalie Antti Niemi, who receives him with an awkward “Uh, what are you doing here?” side hug like a kid whose dad showed up too early to pick him up from prom.

• “Oh, look, they’re going to review a series-winning overtime goal in Game 6 of the Stanley Cup final. I didn’t realize that was allowed,” sobbed every Buffalo Sabres fan into an empty bottle of absinthe.

• We’re treated to our first replay, this one from directly behind the net, which somehow still doesn’t show where the puck went. But the overhead view makes it clear — it’s a goal, and the Hawks are Cup champions.

• Of course, we have to wait for the replay review, which means we’re seconds away from a very cool moment when a referee will skate to center ice and announce to the crowd that … oh, wait, the officials are all just leaving. Sure, that’s just as good.

• Watching all of this unfold from the bench, Flyers defenseman Chris Pronger is showing off his Murder Face. You can tell, because it’s slightly different from his Manslaughter Face and his Regicide Face.

• The crowd finally figures out what’s happening when the goal is announced over the PA. It really was confusing to be there. Here’s a great view of the goal as shot by a Flyers fan in the stands. I’d warn you that it’s NSFW, but you saw the part about it being a Flyers fan, right?

• As Kane is skating around doing weird hand motions, let’s take a moment to remember that he was the no. 1 overall pick of the 2007 draft — a pick the Flyers owned by virtue of finishing last, until the Blackhawks won the draft lottery and jumped past them. Three years later, he scores the Cup-winning goal in Philadelphia while wearing the number of the Flyers’ one-time franchise player who never brought them a title. That’s not just a kick in the groin, it’s a kick in the groin with a full running start down a flight of stairs.

• Admit it, you’d forgotten about the Jonathan Toews muttonchop era, hadn’t you?

• Speaking of Toews, he and Kane share an emotional embrace. It’s a touching scene, especially since it’s pretty much the last moment they’d have together before ruining their lives by agreeing to film this.

• I feel like all the confusion has masked the fact that this was a terrible goal. Leighton probably sends the officiating crew a thank-you note every day for deflecting the attention.

• We see Stan Bowman and the Chicago front office jumping up and down and hugging, so we can assume it’s either replay of their reaction to the winning goal or getting the Wild to agree to the Cam Barker/Nick Leddy trade.

• We finish off with what I’m going to go ahead and say was the first and only comparison of Kane to “Mush” March, unless the latter was into growing ironic mullets.

This was such a weird play that it never really ended up getting the respect it deserves among all-time great NHL goals. Think about it: An Original Six team ends a half-century Cup drought, in overtime, on a beautiful individual effort by one of its superstars. Normally, a goal like that would be played on a constant loop for the next decade. But you almost never see it. Because, of course, we almost never saw it.