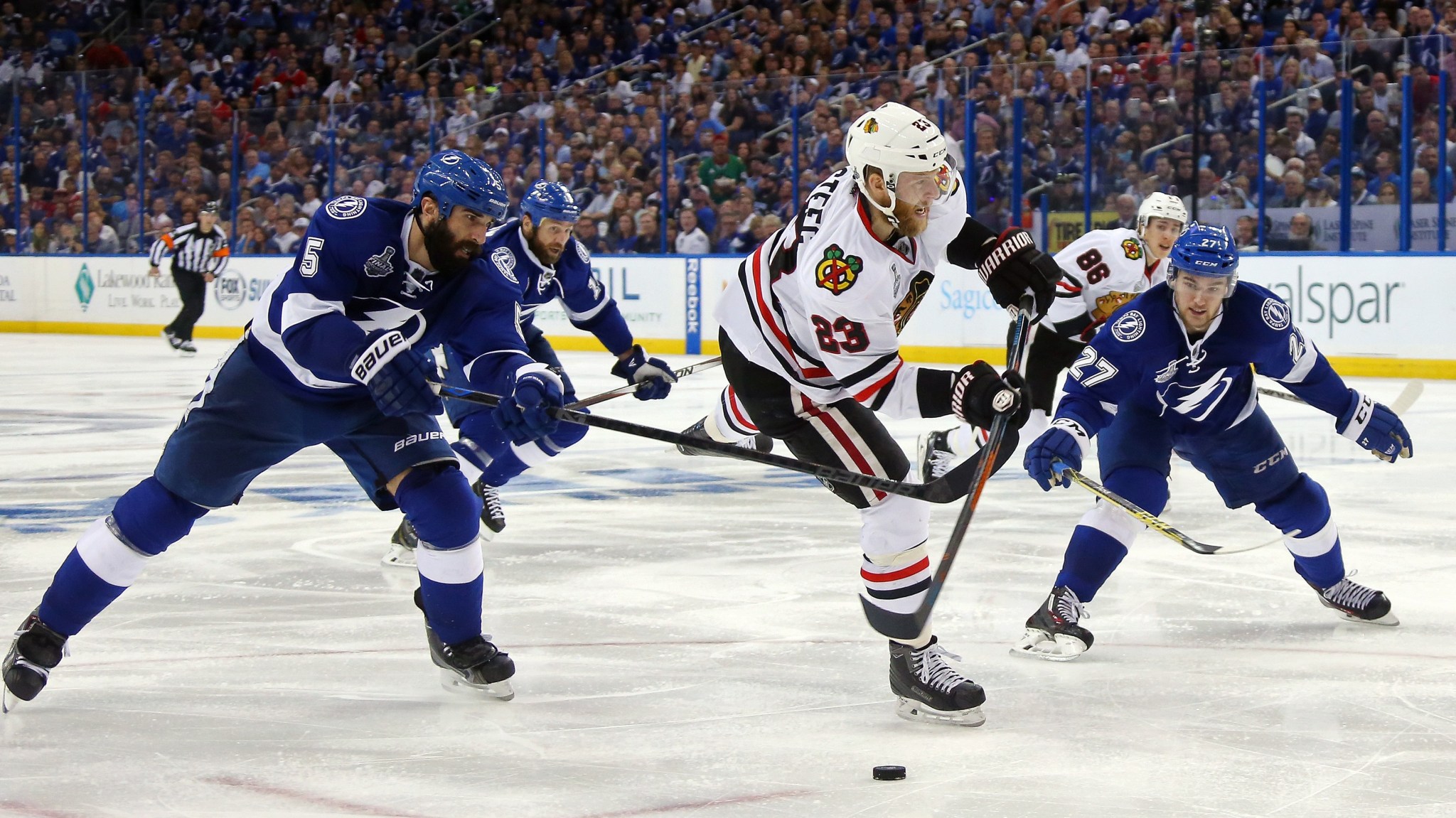 “To me, this series has been expect the unexpected.”

That was Tampa Bay Lightning coach Jon Cooper on Saturday night, after his team had dropped a 2-1 decision on home ice in Game 5 of the Stanley Cup final. He was offering the observation in response to a question about whether back-to-back 2-1 final scores meant that the series had settled into a defensive struggle, but it was probably a comforting message to deliver in the bigger picture right now. That’s because today, with the Blackhawks leading the series 3-2 and holding home ice for Monday’s Game 6, the expectation is that Chicago is about to win the Stanley Cup.

Tonight marks the first time in the modern era that the Blackhawks will have a chance to skate the Cup on home ice. Given their well-documented excess of talent, experience, and, yes, resiliency, blowing it now to a Lightning team that’s young and hurting would seem to go against the script.

And that’s where the good news for Tampa Bay kicks in, because so far this matchup hasn’t much gone according to plan. Patrick Kane and Steven Stamkos can’t score, but Cedric Paquette and Antoine Vermette can. The series has been the closest we’ve ever seen — it’s the first time in final history that no team has held a two-goal lead at any point through five games — yet we’ve somehow avoided any overtime. And every now and then, an injured goalie who sometimes seems like he can barely stand decides to charge out of his net to body check his own defenseman. (More on that last bit in a second, since it turns out to be important.)

Given all that, it made a certain sort of sense when the hockey world arrived back in Tampa last weekend to find that the downtown had been taken over by an anime convention, with the streets full of cosplaying fans dressed as superheroes and cartoon characters. When you’ve got a Stanley Cup that refuses to make much sense, why not mix in a few grown men dressed as Pikachu?

Somehow, it all worked together. Over here is an enthusiastic 16-year-old with a lightsaber getting dropped off at the entrance by his mom. Over there is an unheralded 21-year-old rookie going head-to-head with All-Stars and winning. This lady is pretending she can cast magic spells. That guy is pretending he didn’t bite anyone. Here’s Captain America, there’s Captain Everything, and the whole time you’re just thinking, Why not? Why the hell not? Who ever said any of this should make sense?

And so, it goes without saying, the big moment from Saturday’s game didn’t come off of a brilliant rush or a sterling defensive effort. No, it came six minutes into a scoreless game, on a seemingly harmless Blackhawks clearing attempt into the Lightning zone that defenseman Victor Hedman was heading back to handle. Patrick Sharp was on him, but not in any sort of dangerous way, and Hedman was ready to chip the puck off the boards to send Stamkos off on a breakout when … well, see for yourself.

That’s not a bad hockey play. “Bad” hockey plays usually appear in an instant, the result of a faulty read or a misfire under pressure, the sort of thing that happens to everyone in a game in which every fraction of a second counts.

No, that was a terrible hockey play, almost painfully so. It unfolded so slowly that you had time to think, What is he trying to … oh no. No, no, no. Ben, stop, you don’t want to do this.

Bishop later explained that he thought he saw an opportunity to make a quick pass to Stamkos to catch the Hawks on a line change. He’d tried to call Hedman off, he said, but the rink was too loud. That’s plausible enough — it beats my personal theory that he was sick of everyone asking about his alleged injury and wanted a chance to talk about something else — but it doesn’t make the play any easier to defend. When goals are at a premium, as they suddenly are in this final, it’s awfully hard to recover from giving one away.

In an added sign that maybe it just wasn’t going to be the Lightning’s night, Bishop’s gaffe was actually the second by a goaltender in the game’s opening minutes. Moments earlier, Chicago’s Corey Crawford had misplayed the puck behind his own net, handing it right to Lightning winger Nikita Kucherov in front. That led to a desperation dive back to the crease, one that resulted in the puck staying out of the net and Kucherov’s face flying into it. The young winger was injured and didn’t return; his status for tonight is unknown.1

Sharp’s opening goal came as part of a first period that the Blackhawks dominated, maybe their best extended stretch of the series. To their credit, the Lightning pushed back in the second, eventually tying the game midway through when Valtteri Filppula converted a gorgeous cross-ice pass from Jason Garrison.

The 1-1 score lasted until two minutes into the third. Kris Versteeg beat Garrison at the Chicago blue line to spring himself on a partial break, but was running out of room and time as he closed in on Bishop. By the time he tried to get a shot away, it was too late; Garrison had caught him, lifting his stick and forcing him to fan on the shot. But the puck kicked off Versteeg’s skate and back to his stick, and he was able to throw a desperation try at the net. It was an easy stop for Bishop, but as with just about everything that’s come his way since his Game 2 injury, it produced a dangerous rebound, and Antoine Vermette buried it for the eventual winner.

It’s been quite a ride for Vermette, from expensive trade-deadline acquisition to healthy scratch to second-round bust2 to big-goal hero. We may be just one more game-winning goal away from him single-handedly forcing the league’s growing collection of overly timid GMs to start making risky trades again, which is reason enough to cheer him on.

So now we head to Game 6 tonight, as the possibly dynastic Blackhawks look to win their third Stanley Cup in six years. Accolades aside, they’re far from a lock. Crawford has spent the entire series having Corey Crawford games, which is to say that he makes you nervous on every shot and yet somehow ends up with decent numbers. Kane’s matchup with Hedman is starting to get a distinct “Chara vs. Kessel” aroma to it, although the last line change will help the Hawks avoid that tonight. And of course, it’s theoretically possible that what’s certain to be an ear-splittingly frantic Chicago crowd could cause Toews to briefly experience human emotion, which might throw off his game since it would be his first time.

One factor we can probably stop worrying about: Chicago’s lack of defensive depth. On Saturday, Duncan Keith once again played nearly half the game, while Kimmo Timonen and Trevor van Riemsdyk saw their minutes held to the single digits. The question of when Keith and the rest of the Hawks’ top four would finally crumble under the weight of all that playing time has been a playoff-long theme, and with Chicago now one win away from the Cup, it’s basically turned into the creepy cowboy from Mulholland Drive: a cool plot point that apparently just isn’t going to pay off at all. Don’t worry, hockey writers, the “Duncan Keith will wear down” story line just went off to live in a nice field out in the country.

As for the Lightning, they’re clearly hurting. Bishop isn’t right. We don’t know if we’ll see Kucherov again. Tyler Johnson says he’s not hurt but has mysteriously stopped taking faceoffs, which is to say that he’s definitely hurt. And they can’t possibly be the only ones. The Lightning will tie an NHL record tonight for the most games played in one postseason. They’ll need to break that mark if they’re going to force this back to Tampa for Game 7.

And then there’s Stamkos, who’s been held to just one assist on the series while questions swirl about his lack of ice time. He wants this so badly that it’s palpable almost every time he speaks. Maybe he’s also banged up, maybe he’s pressing, or maybe he’s a guy who’s playing well and just not seeing the puck bounce right for him. In any case, it’s hard not to feel for him.

That nicely sets up the dramatic story line for tonight — Stamkos scores the winner, silences the Chicago crowd, and sends this back to Tampa for a Game 7. That’s what any decent script would do.

Which, in this series, means we shouldn’t bother counting on it. As a wise man once said, expect the unexpected.

NBA Shootaround: Regression to the MVP