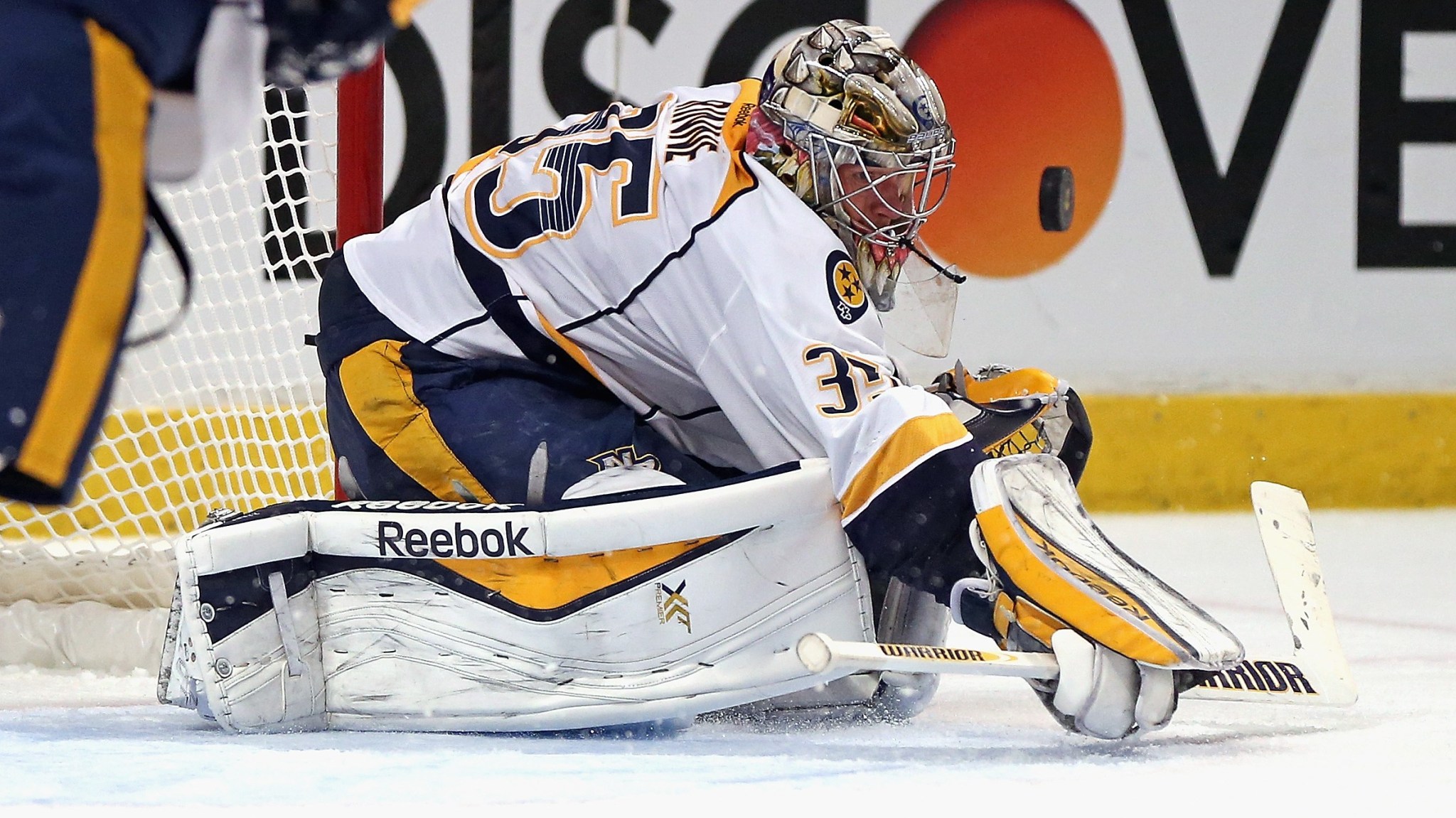 We’ve crossed the halfway point in this year’s playoffs, which means we’re down to four teams left battling it out for the Stanley Cup. Making it this far is an enormous accomplishment, and we should take some time to celebrate the excellence of the players who are making it happen.

We should, but we won’t, because it’s way more fun to point fingers at the guys who didn’t get it done. So today, let’s assemble a dream team of playoff busts from the first two rounds.

One obvious disclaimer here: “disappointment” is relative. A first-liner who suffers through an awful series may still be more productive than a fourth-liner who meets expectations, but the star still gets the dreaded bust label. Fair? Maybe not, but that’s why these guys get paid the big bucks.

These lists are always tricky, since you’re dealing with a small handful of games and the boxcar stats can be misleading; I fully expect to wake up tomorrow to find the words “small sample size” spray-painted on my garage door. But I’m willing to take that chance, mainly because I just want to write a post about disappointing hockey players that doesn’t include any Leafs.

We’ll pick a full roster of centers, wingers, defensemen, and goalies. Spoiler alert: This is going to end up being a pretty impressive group that would win an awful lot of games under normal circumstances (if you could squeeze them under the salary cap). But if you had many of them in your playoff pool, you’re already out.

Evgeni Malkin, Penguins — Let’s start with an easy one. The Penguins bowed out to the Rangers in five, but all were one-goal games. An extra goal or two could have turned the series around, which is why it was so frustrating to watch a superstar talent like Malkin struggle through a point-less series. That slump extended beyond the playoffs — he had no goals and just three points in his final 10 regular-season games — and it’s contributed to calls for the Penguins to trade him. (So far, it sounds like the team will stay the course.)

Paul Stastny, Blues — Stastny was the league’s biggest UFA signing last summer, at least in terms of average annual salary, and while his 46-point season was well under his career best, his solid two-way play still made him a key component of the Blues’ hopes. But his playoff numbers — just one goal and no assists in six games — were even worse. He didn’t play badly (his lined outscored and outchanced their opponents), and he certainly wasn’t alone, as pretty much every Blues forward not named Tarasenko could make an appearance on this list. But after yet another disappointingly short playoff run in St. Louis, it’s hard to argue that the Blues got what they paid for.

Tomas Plekanec, Canadiens — That Plekanec is, in theory, the Canadiens’ no. 1 center probably says more about the way the roster has been built than it does about the player. But that’s where he’s slotted in, and one goal and four points in 12 games doesn’t really cut it.

Antoine Vermette, Blackhawks — It’s risky to pick a player whose team is still playing — when Vermette scores his inevitable hat trick tonight to make me look bad, Chicago fans will know who to thank — but it’s hard not to find a spot for the Hawks’ costly deadline pickup. They thought they were getting some crucial secondary scoring to take the pressure off the big names, and they coughed up a first-round pick and a prospect to get Vermette in a rental deal. But he looked like an awful fit in Chicago during the regular season (just three assists in 19 games), and he was a healthy scratch for the team’s first two playoff games. He did have a big goal against the Predators in a Game 4 Hawks win, but that’s been pretty much it for the score sheet. He’s still been OK defensively, but you don’t give up a high pick for OK defensively.

Rick Nash, Rangers — Yes, he’s playing reasonably well, and yes, the Rangers are still alive, so there’s time for redemption. But his two goals in 14 games leave him with just seven for 55 career playoff games. That’s a stunning total for a guy who scores as many regular-season goals as Nash does. On the bright side, he’ll look good on a line with Malkin for this all-bust team.

Thomas Vanek, Wild — Remember when Vanek was considered one of the league’s most dangerous goal scorers? Yeah, me neither. He had two 40-goal seasons by the age of 25, but a drop in production over recent years has brought down expectations. Still, even by those lowered standards, Vanek’s goalless performance over two rounds was inexcusable. He’s getting ripped for it, and rightly so.

Bobby Ryan, Senators — Ryan limped through last season’s second half before revealing an injury and getting shut down for surgery. Watching him struggle through the last 20 games of this season, scoring just one goal along the way, you kept waiting for another injury announcement. It never came,1 and Ryan’s struggles continued in the playoffs as he went point-less in five of Ottawa’s six games against Montreal. He did have a pair of goals in a must-win Game 5, so it wasn’t a total write-off, but the Senators needed more from their highest-paid player.

Gustav Nyquist, Red Wings — The 25-year-old sniper followed up last year’s point-less playoffs by registering just two points in Detroit’s seven-game loss to the Lightning. He now has just three goals and four assists to show for 30 career playoff games, which has to be at least a little concerning to Wings fans.

Alex Galchenyuk, Canadiens — The 21-year-old has been slowly but surely developing into an offensive threat since being picked third overall in 2012, reaching the 20-goal mark for the first time this season. But he sputtered in the playoffs, with just one goal and three assists (although that one goal was an overtime winner). Galchenyuk’s spot in the wingers category is doubly disappointing; not only did he struggle to produce, but the team drafted him with hopes it was getting a center, not a wing, and GM Marc Bergevin was surprisingly frank in his assessment of the young forward’s future.

T.J. Oshie, Blues — As we’ve already mentioned, more than a few Blues could stake a claim to a spot on this list. But we’ll give one to Oshie, whose one-goal, one-assist performance against the Blackhawks helped lead to another early exit for the Blues, and some discussion over whether it’s time for the team to finally gut its core.

Kyle Okposo, Islanders — After putting up 51 points in just 60 games during the regular season, Okposo was limited to just three in the Islanders’ first-round loss to the Capitals. He still had an impact, knocking Eric Fehr out of the series with a big hit, and he was still recovering from the eye injury that threatened his season, so it’s hard to really call him a bust. But our list needed an Islander, so Okposo’s our guy.

Mason Raymond, Flames — While he’s not anyone’s idea of a superstar, Raymond has been a dependable player who’s averaged about a half-point per game over his career. He was also one of the few Flames with significant playoff experience, and he had even started his career with their first-round opponents, the Canucks. That seemed to make him a solid candidate to become the sort of useful depth option that can sometimes emerge to give a team a boost at playoff time. Instead, he was a healthy scratch on some nights and only put up two assists in the eight games he did dress.

Dustin Byfuglien, Jets — When a team gets swept out of the first round in four games, none of its players can say they had a great playoffs. But Byfuglien’s run against the Ducks was especially rough. He was held to one assist, and he had a very tough outing in the crucial Game 3, in which the Jets squandered a chance to get back in the series in front of an explosive home crowd. In fact, his two most memorable moments in the series were probably his Marshawn Lynch impression and his goon job on Corey Perry.

Niklas Kronwall, Red Wings — Kronwall is counted on to do more than provide offense, so maybe you could forgive his two-point performance in Detroit’s opening-round loss to the Lightning. But he struggled badly at 5v5 on the defensive side, posting an ugly minus-17 in scoring chances and a sub-40 percent Corsi. And more importantly, he threw a reckless hit and got himself suspended for the Wings’ Game 7 loss.

Mike Green, Capitals — Ouch. Over the Caps’ 14-game run, Green managed just two assists — and those came in Games 2 and 3 of the opening-round series with the Islanders. From there, it was 11 straight games without a point, and his biggest impact may have been taking two bad penalties in Game 7 against the Rangers. He wasn’t awful, posting roughly break-even possession numbers, but for a guy still viewed as an offensive defenseman who’s heading into unrestricted free agency, it was a performance that probably cost him some money.

Cody Franson, Predators — Nashville paid heavily to get Franson and forward Mike Santorelli as rentals,2 and neither paid off. Teammate Roman Josi could make a case for this spot, too, but at least the Predators didn’t have to sacrifice a chunk of the future to land a few months’ worth of work from him.

Ryan Suter, Wild — The big-minute, big-money blueliner isn’t expected to fill the net, so we can largely ignore his three points in 10 games. But he was underwater against the competition by just about any measure — shot attempts, scoring chances, and especially goals. That’s led to some speculation that his heavy ice time may finally be wearing him down.

Kevin Bieksa, Canucks — It was surprisingly tough to find a Canuck who you’d really call a playoff bust. Maybe you could point at Eddie Lack, but he was really a backup filling in for an injured starter. Everyone else was in the ballpark of what you’d expect, and I was going to leave Vancouver off the list entirely. But then I remembered that if a Canucks fan goes 24 hours without finding something to feel dramatically aggrieved about, they wither and die. I couldn’t have that on my conscience, so let’s go with Bieksa, who had no points, struggled at times to keep up with the Flames’ faster kids, and made his biggest impact by pretending not to know somebody’s name.

Pekka Rinne, Predators — Remember what we said way back at the beginning about the role of expectations? Rinne earned a spot as a Vezina finalist for his regular-season work, but he was just OK in the playoffs, posting a .909 save percentage. That’s not bad, and it’s certainly not the reason the Predators lost. But with the Blackhawks struggling through their own goaltending issues, there was an opportunity for Rinne to steal the series. Instead, he was just average.3

Andrew Hammond, Senators — Remember when he was the toast of the hockey world over the season’s final two months? Apparently that kind of run buys you two semi-decent playoff games and a spot on the bench to watch Craig Anderson stand on his head.

Ondrej Pavelec, Jets — Yes, we’re carrying an extra goalie. Hey, it’s an all-bust team, we’re probably going to need one. And Pavelec gets the spot after posting a career year and going into the playoffs red hot, only to get lit up by the Ducks. If we’re counting Lack as an injury fill-in, Pavelec was the only starter to post a sub-.900 save percentage in the playoffs.

The 30: How Has the Hot Stove Affected the NL West?