The Foot That Ate Philadelphia: Joel Embiid’s Setback and What It Means for the Sixers 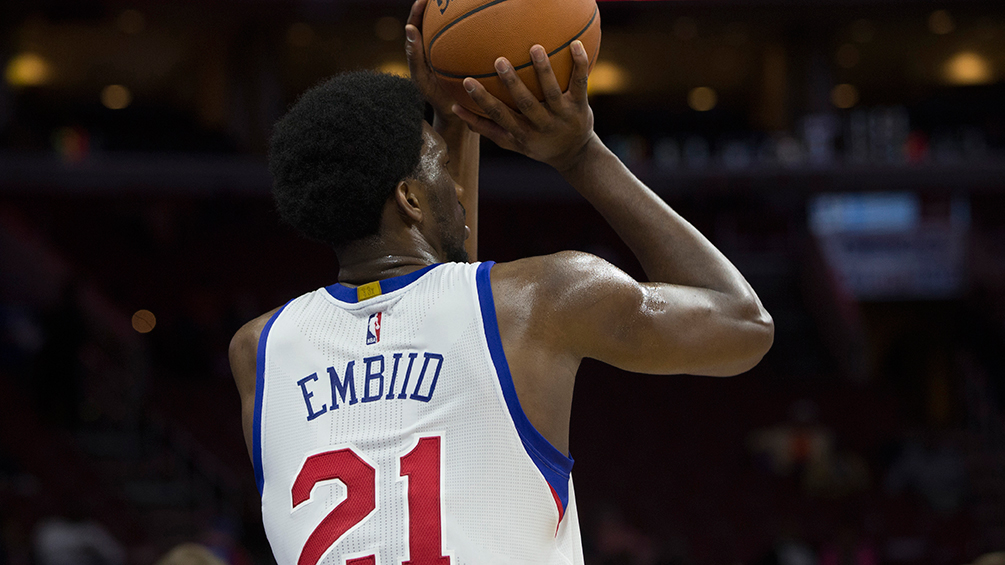 There was a news dump on Saturday night, and it landed right on Philadelphia. For any Sixers fan — whether they are all in on the process or have turned their Thad Young posters into a kind of shrine — Saturday night’s Woj bomb and attendant Sixers press release is pretty bad news.

Embiid, who many thought had the highest ceiling (it was about the height of Hakeem Olajuwon) coming out of the 2014 NBA draft, was/is recovering from surgery to repair his navicular bone. We’re coming up on the one-year anniversary of the procedure, actually. Happy birthday!

Recovery from this surgery typically takes five to eight months, but the Sixers exercised caution and held Embiid out for the entire 2014-15 season. Throughout the first half of 2015, the news about Embiid was bad, including missed rehab appointments, fines accrued, and a blowup with the Sixers training staff. There was some kind of setback in March. But in the last few months — represented in some breathlessly shared Vines and videos — Embiid was looking good. The use of the word “dominant” in the Woj story is just a twist of the knife.

Will Embiid need surgery? A protective boot? Will he be held out of summer league? Is he late-period Andrew Bynum? Should he have been out partying this spring? Is that really any concern of ours? Is this actually a totally normal contingency when dealing with something like navicular bone surgery? Is he Greg Oden 2.0? These are all legitimate questions. I wouldn’t hold my breath waiting for answers from the usually cagey Sixers, though.

There are a few different reactions you can have to this story, and frankly, any one of them is appropriate at this point. You can fall into resignation and depression. Foot injuries like this on big men usually wind up at the top of a player’s basketball obit, not in the footnotes. “Joel Embiid came out of Kansas full of promise, drawing comparisons to some of the game’s greatest big men, but a foot injury derailed his career.” Nobody is going to be surprised if they read a story that starts that way in the next few years.

Of course, there’s always anger — the protein shake of the sports fan. You can go full Carrie Mathison, setting up a corkboard of every decision that Sixers GM Sam Hinkie has made over the last few years. In a different world, the Sixers could have Marcus Smart, Elfrid Payton, Giannis Antetokounmpo, and Nerlens Noel. That is by no means a perfect core, but it looks a lot further along than where they actually are: Noel, an injured Embiid, a departed Michael Carter-Williams, and some Vines of Dario Saric playing like Dwyane Wade. Over the last two drafts, the Sixers had four picks inside of the top 12. Noel is the only functional player they’ve got to show for it right now.

Then there’s the Zen way of looking at it. Help me out here, Axl …

The postseason is a bracing time of year for fans of rebuilding teams. You really see just how far away you are. For 82 games, you can trick yourself into believing that Robert Covington matters. Then the playoffs start and you realize how little it all means. That can be depressing, but it can also provide perspective.

So, with that in mind, the Sixers are no better or worse off than they were before this Embiid news broke. There isn’t a “there” there yet. It’s hard to imagine Embiid’s injury particularly impacting Hinkie’s draft strategy. The Sixers are still in Best-Available country. If the Lakers take D’Angelo Russell with the second pick, and Karl-Anthony Towns or Jahlil Okafor is still on the board, the Sixers will probably take one of the big men, despite the presence of Noel and Embiid. An asset is an asset. By that same token, Hinkie will not be scared off from taking projects like Emmanuel Mudiay or Kristaps Porzingis just because some want him to put a better product on the floor this October. He has not made a single decision that suggests he cares about any timeline but his own. That might actually cost him his job before he gets to see it through, or maybe the Sixers ownership group really is committed to a radically transparent rebuild, with the ultimate goal of winning an NBA title, and the owners are going to trust Hinkie through as many burned first-round picks as he needs to make to get them there.

To make myself feel better, I look at the largely homegrown roster of the Golden State Warriors. Players like Steph Curry, Klay Thompson, and Harrison Barnes: all first-round draft picks, all making up the core of a championship-caliber team. But to get to Curry, Thompson, and Barnes, they had to go through Patrick O’Bryant, Ike Diogu, Andris Biedrins, and Anthony Randolph. Will Hinkie wind up being Bob Myers or Garry St. Jean? Will the Sixers be playing for a title in four seasons, or kicking the tires on the latest Euro prospect who might need some seasoning in the Turkish Basketball League? The real question, for Sixers fans, is how long are you willing to wait?

The Good and Bad of the LeBron Juggernaut