Are My Methods Unsound? Why ‘Sicario’ Is the ‘Apocalypse Now’ of the Drug War 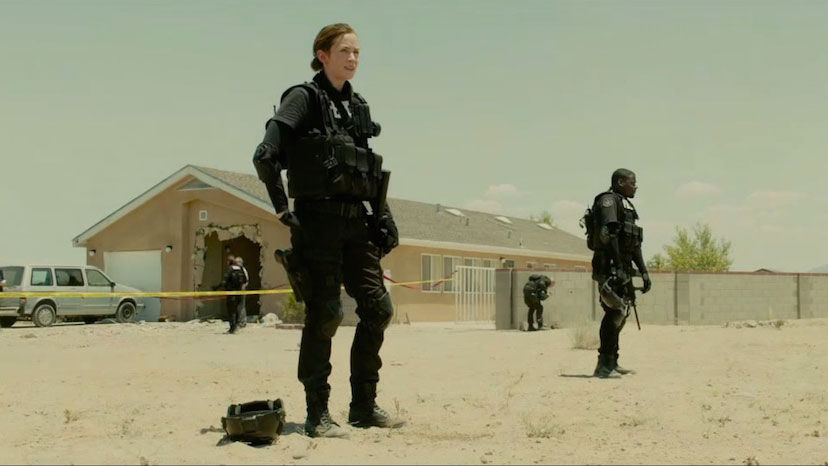 There are two kinds of war movies. There’s Platoon and there’s Apocalypse Now. One addresses the specific hardships and adventures, acts of bravery and cowardice, and sociopolitical context around a particular conflict. The other is about conflict itself — why we find ourselves, over and over again, drawn into these acts of mutual destruction. The two cross-pollinate, of course (Platoon, with its two father figures fighting for the soul of a son, has almost biblical overtones, while Apocalypse Now could not be made about any other war than Vietnam), but it is a useful way of dividing the genre. There is Saving Private Ryan and there is Inglourious Basterds; there is reportage and there is poetry.

In the past, movies about the war on drugs have played like procedurals — crime films — and they have played like cinematic journalism. This is especially true in the case of Steven Soderbergh’s 2000 film Traffic, probably the most notable film ever made about the drug trade on the U.S.-Mexico border. But as the war on drugs has become the drug war, and as the prism through which we view the conflict has become increasingly militarized, so has the cinema surrounding it. And now this war has its Apocalypse Now.

Francis Ford Coppola’s 1979 epic was, as his wife Eleanor described it in the documentary Hearts of Darkness: A Filmmaker’s Apocalypse, “a metaphor for a journey into self.” It followed a lone agent as he made his way up a river to find a mad soldier, Kurtz, who had gone rogue and begun to raise his own army, somewhere in the jungle. As this agent, Willard (played by Martin Sheen), ventures farther up the river, he goes deeper into himself, seemingly traveling back in time to a primitive age. The imagery gets increasingly hallucinogenic; the violence, especially at the end of the film, has mythical overtones — where murder becomes some kind of religious sacrifice.

Visually, Sicario is similar to Apocalypse Now in that it uses a modern setting to paint a portrait of hell. When Sicario begins, it’s all stark suburban desert-scapes and harsh light — the sun, overhead fluorescents in office buildings. But as the film winds on, and the moral decay sets in as our hero becomes corrupted, cinematographer Roger Deakins and director Denis Villeneuve move to a palette of grays, oranges, reds, and purples. The desert becomes almost lunar; the world becomes otherworldly.

The visuals match the arc of the story. This is a rabbit hole tale. Sicario is about an FBI agent who joins up with two other … agents (I use that term loosely) to hunt down a shadowy cartel chief in Mexico. That’s the logline for the script. It is hardly what the movie is about.

It’s a movie about the drug war, not the war on drugs. This may not be immediately apparent to the viewer; it certainly isn’t to some of the characters in the film. In fact, it’s this discovery — for both the protagonist and the audience — that drives the film: This is a movie about revealing, about journeying into hell and finding out that it looks awfully familiar.

One of the things you hear in the beginning of Sicario is Emily Blunt’s character, Kate Macer, insisting that she is not a soldier. She says it once when she is asked to volunteer for a special team that is being put together to “dramatically overreact” to increased Mexican drug cartel activity Stateside, and she says it again when she finds out just how dramatic that overreaction is. Macer is an FBI agent specializing in kidnapping cases. She might wear a helmet, she might be protected by body armor, she may travel in a military-grade personnel carrier, she may fire an automatic weapon and duck from explosions, but she’s not a soldier. This seems to be an important distinction to her.

It is one that matters very little to Josh Brolin’s Matt Graver. Nobody is really sure what Graver does or who he works for. He shows up in Arizona wearing flip-flops and bifocals, with the warm demeanor of a surfing instructor. Does he work for the Department of Defense? State? Jurisdictions are nothing but clerical obstacles to Graver. Call yourself a soldier or don’t. He knows this: We’re at war, all the time.

She is constantly looking for reference points — locations, context, hallmarks of organization. In the first half of the film, Benicio Del Toro’s Alejandro character is seemingly there to filibuster all of these efforts. When she asks him on a private jet flight to El Paso how Juárez works, he smirks: “You’re asking me how a watch works. For now, just keep an eye on the time.” She wonders if he’s American, who he works for, and he says, “I go where I’m sent.” This is how he talks. He’s gnomic. Finding the cartel chief “would be like discovering a vaccine.” When he prepares her for a raid in Juárez, he tells her, “Nothing will make sense to your American ears, but in the end, you will understand.”

This language is seductive to Macer, and to us. If Alejandro is Macer’s Kurtz (a messianic figure beckoning her deeper down the rabbit hole), Graver is her Kilgore — a wildly charismatic, possibly insane commander who has truly found his calling in this conflict. Where Alejandro is all scar tissue and darkness, Graver’s eyes sparkle; he is in his element. Whether he’s riding in an SUV convoy with a cartel higher-up or leading a raid through tunnels connecting Arizona and Mexico, Graver has the look of someone who already knows how a story ends. Alejandro and Graver aren’t just soldiers, they are salesmen. They are selling an idea to Macer — that they will find the men responsible for a mass murder, the results of which Macer stumbles upon in the beginning of the film — so that she will give them the operational cover they need to carry out their mission. But really what they are selling is ideas: of unmooring one’s self from language, from designation, from occupation, from beliefs about borders and jurisdiction. They want her to get out of the boat.

To do this, they tell the truth, they lie, they misdirect. Some might see this as a corruption, but there are ways in which Macer can be viewed as a willing participant; she actively wants to go through this transformation. They show her something. There is a line in Apocalypse Now when Willard quotes Kurtz, but the line could just as easily have been spoken by Alejandro: “There are many moments for ruthless action — what is often called ruthless — what may in many circumstances be only clarity, seeing clearly what there is to be done and doing it, directly, quickly, awake, looking at it.” By the end of the film, Macer is damaged, beaten, bloodied, and unsure of the future. But she is very much awake.