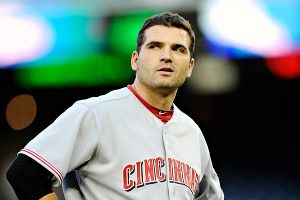 Of course, the general consensus of this deal, and the Brandon Phillips one that followed, was that the Reds would one day regret it. Votto might have MVP credentials, but he plays a position that’s easy to fill, and there will come a day in 2023 when he’s a 40-year-old first baseman making $25 million. Meanwhile, the Phillips deal wasn’t as grand in years or overall cash, but the Reds second baseman will now be getting paid like a 30-30 player in 2017. The 10th anniversary of the only time he actually went 30-30.

Is it practically inevitable that Votto and Phillips will be overpaid at the end of their deals? Yes. But will the Reds come to regret either contract? I say no. Because despite featuring the exchange of $297.5 million, the deals are not about the money.

In the 30-plus years since the Big Red Machine stopped functioning properly, the Reds have made the postseason just three times. And though a lot of decent players have passed through Southwest Ohio during these years, with the exception of hometown heroes Barry Larkin and Ken Griffey Jr., no big-name players went out of their way to become a Red.

In fact, here’s a complete list of Reds All-Stars. It’s got a lot of familiar names, but it’s got nothing on this, this or this.

The point being, now that the Reds have an identity, and players who aren’t just good at baseball, but enjoy being Cincinnati Reds, why not make it last? If Votto and Phillips are allowed to hit the open market, some other team will swoop in and steal them for a similar price and the Reds will be back at square one. And they could have traded Votto for prospects and tried to rebuild, but what’s the point of that? The Pirates have been rebuilding since 1993. How’s that been working out?

Winning is the best way for a team to make money, but homegrown stars keep fans interested during the lean years. The boss once wrote that as a Red Sox fan, he never got excited about seeing Cal Ripken play. Well, you know who did? Orioles fans! In Ripken’s last season, the Orioles averaged 38,000 fans per game. It was the first time they drew below 40,000 since Camden Yards opened a decade earlier. Since then attendance has been steadily declining, going as low as 21,000 the last two seasons.

Have the Orioles been bad? Oh, indeed. But they were just as bad during Cal’s final four seasons and still managed to draw nearly twice as many fans as they do now. The problem is that since Ripken retired, they’ve had constant turnover and few stars worth paying to see. The team’s best players (according to WAR) the last three seasons have been J.J. Hardy, Jeremy Guthrie, and Brad Bergesen. For real.

A community isn’t going to fork over money to see players they don’t care about. Keeping Votto and Phillips in Reds uniforms gives fans a consistent, recognizable product on the field. And in Phillips’s case, some other fields as well.

Even Ryan Howard’s extension, which Rob Neyer generously referred to as both “a testament to old school ignorance” and “a big bowl of wrong” can be (somewhat) justified from a place of history and loyalty. It guarantees that Howard, arguably the most popular Phillies hitter since Mike Schmidt, and a key part of the team that gave Philadelphia its first sports championship in a quarter century, would finish his career in the only uniform he’s ever worn.

So what if Howard has a busted Achilles and was (by some measures) less valuable than Seth Smith and John Buck last year? The Phillies have money, he helped the team win, and they essentially rewarded him with a really large tip.

The Reds might not have the resources the Phillies have, but it’s not like Matt Kemp, Cole Hamels, and Albert Pujols (regardless of what some people say) are walking through that door. Joey Votto and Brandon Phillips? They did. And the Reds did what they had to do to make sure they didn’t walk out of it.