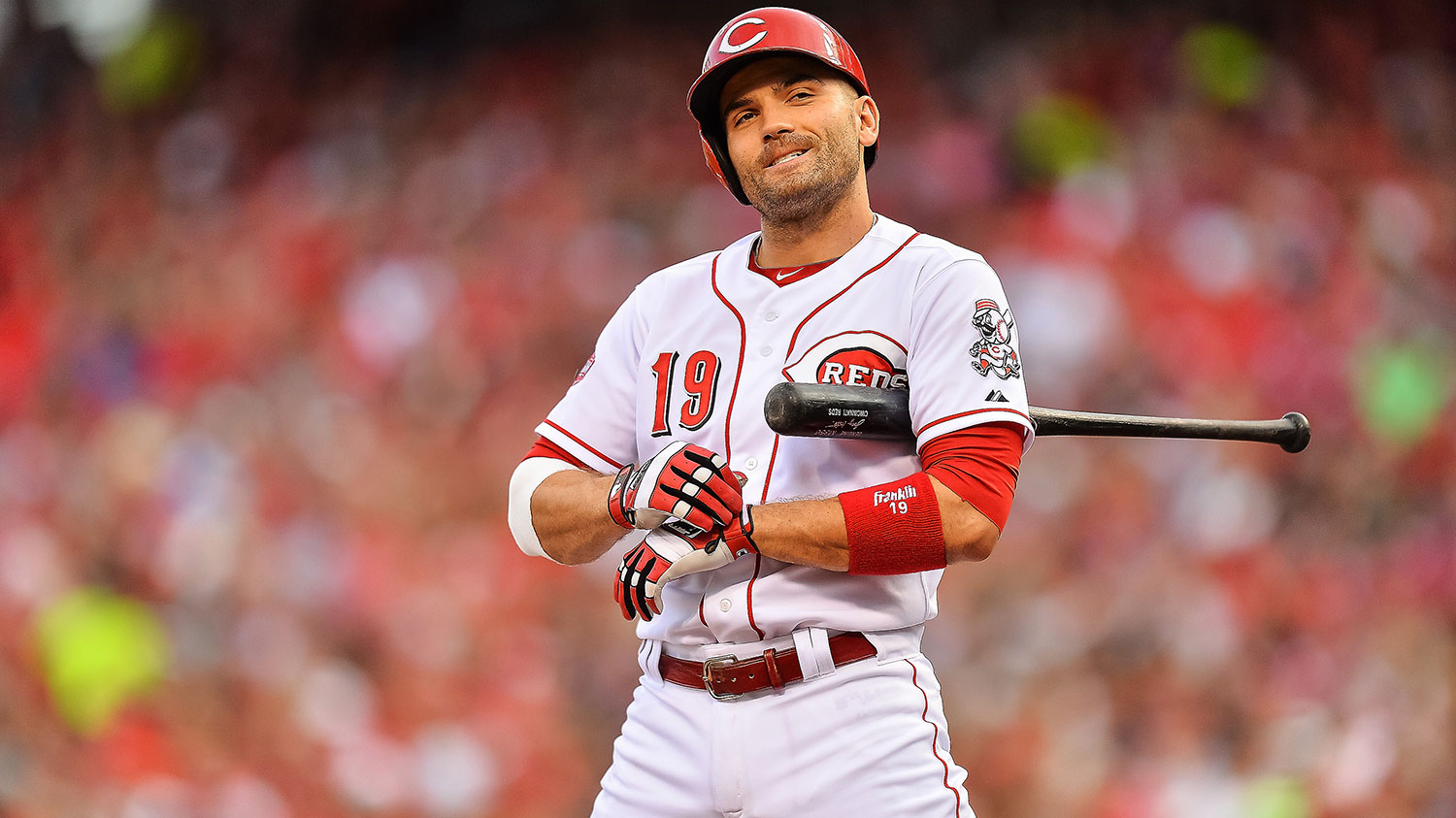 In the hours leading up to every fifth Dodgers game, there’s a simple rule that everyone in the clubhouse must follow: Do NOT, under any circumstances, talk to Clayton Kershaw. L.A.’s ace serves as the most extreme modern case of an old baseball tradition: pitchers should be left alone to focus on the task at hand when it’s their day to pitch.

Now take that focus, spread it out over six games a week, and you’ve got Joey Votto. On game day, you might see an appreciative little smirk from the Reds’ star first baseman if a teammate lands a particularly good joke. Otherwise, Votto is a study in tunnel vision, someone singularly focused on the science of hitting and on distinguishing balls from strikes.

So, if there was ever a player willing to go to war over three inches of disputed pitch location, it’s Votto. Facing the Pirates on Wednesday night, Votto disagreed with multiple strike calls made by plate umpire Bill Welke. Vehemently. Flip through strike zone plots from each of those at-bats, and you can see that Votto might have been right to question Welke’s judgment. Of course, it’s one thing to disagree with an umpire. It’s another to lose your damn mind. With a string of strike-zone injustices already on the books, Votto’s beef with Welke grew stronger when he wasn’t granted time during his eighth-inning at-bat. The argument escalated, until Welke finally tossed Votto from the game. And then … hoo boy.

“He’s über-focused,” said Reds reliever (and Grantland contributor) Burke Badenhop, a few days before the Welke blowup. “He’s on a mission, to the point that it’s almost military-ish.”

Votto’s primary mission, of course, is to hit. But his grander calling is to be the world’s foremost authority on the 17-inch span that comprises home plate. When an umpire blows multiple strike calls, then refuses to grant him a timeout, he’s disrupting the essence of what makes Joey Votto, Joey Votto. Mess with Votto’s mastery of the strike zone, and you’re messing with a perfectionist and all that he holds dear. When that happens, volcanic eruptions are bound to ensue. Maybe the real surprise is that it’s happened only twice in the past four months.

So what’s the payoff for all this delicately balanced über-focus? Votto has just been the best hitter in baseball since the All-Star break — better than deserving MVP Bryce Harper, better than imaginary-pixie-dust MVP Yoenis Cespedes, better than everyone else. In fact, Votto has been so good since the midsummer classic, he’s putting up one of the best second halves of a season in the history of the game.

In 52 games dating back to the All-Star break, Votto’s batting .392, with a .568 on-base percentage, while slugging .705. In 234 plate appearances, he’s clubbed 12 homers and 16 doubles, while drawing an astounding 66 walks — better than one walk for every three times at bat. He’s reached base 49 times in those 52 games after the break and in 55 of his past 58 games overall.

If you’re thinking that .568 OBP might seem preposterously high over nearly one-third of a season, you are correct. That’s the sixth-highest OBP for any player after the All-Star break of a given season. The only two players to rate higher? Planet-eaters and on-base percentage kings Barry Bonds and Ted Williams.

One of the biggest criticisms against Votto has been that he’s actually too passive, especially with runners on base. In May of last year, I crunched the numbers to see if that claim had any merit. It turned out that Votto did in fact become a bit more passive in those kinds of potential RBI situations. But that finding came with caveats. For one thing, the study looked at pitches in the strike zone, not those out of the zone; some of Votto’s more aggressive critics have also argued that he should swing at more balls off the plate when there are runners on base — an argument that’s unconvincing once you consider the increased likelihood that he’ll either whiff or hit a weak ground ball that turns into one out or even two. For another, that raw numerical look at the question ignored injuries, such as the knee problem that limited Votto’s 2012 season and the quad issue that wrecked his 2014 campaign.

At any rate, if those problems existed in the past, they’re not showing up this year. Compare his overall production to his offensive numbers adjusted to reflect game situations (i.e. men on base vs. bases empty taken into account), and we find that Votto has been awesome in both cases. He’s second behind only Bryce Harper in terms of best context-neutral numbers this season, with nearly identical numbers that place him second in baseball (behind only Harper) once you introduce game situations to the equation.

You can also be cynical and note that Votto owes a lot of his gaudy walk total and sky-high OBP to a weak Reds lineup; if pitchers aren’t afraid to face anyone else on the roster, they’re going to either walk him intentionally or pitch around him. There’s some truth to that critique, certainly: Votto’s 11 intentional walks are tied for the third-highest total in the NL, and pitchers have grown increasingly cautious with him as the season has worn on.

But looking more broadly at Votto’s 2015 production relative to the Reds’ overall performance, we again find a player who’s doing something exceedingly rare.1 The Reds are on pace to lose 94 games this season. Meanwhile, Votto’s OPS+ stands at a lofty 178. Only six others players in MLB history have posted an OPS+ of 175 or higher, while playing for a team with 90 or more losses.

Add it all up and you’ve got a player who’s batting .317/.460/.561 for the season, even better numbers (once you adjust for league averages) than what Votto put up during his MVP campaign in 2010. While Harper’s been the best player in the NL this year, Votto returning to full health and posting the second-best numbers in the league has been heartening to watch. And in the closing stages of the season, Votto has become supernatural, clobbering pitches in the strike zone, and happily taking his base when they miss. 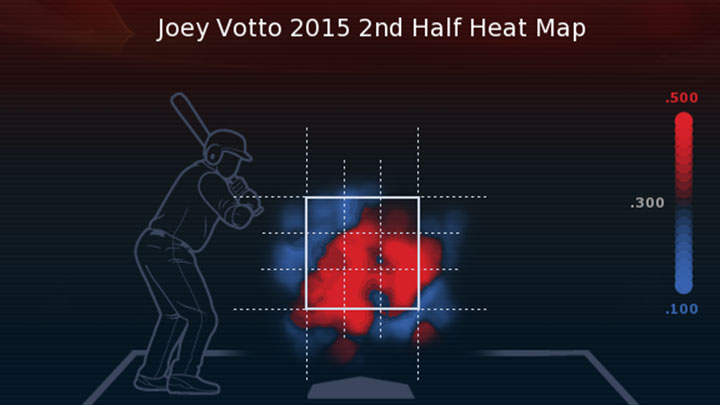 So yes, we might see an occasional Votto tirade when things don’t go his way. But as entertaining as it is to watch a player channel the ghost of Earl Weaver, Votto clearly isn’t just some unhinged anger monster. He’s a proud Canadian who knows how to poke fun at himself. And hell, the guy has a point. A quick Twitter search for #UmpShow reminds us that too many men in blue take themselves too seriously, often to the detriment of the game.2 It’s not like Votto’s being paranoid about missed calls, either: Left-handed hitters in particular are seeing more borderline pitches called strikes against them, much to the lefty-swinging Votto’s chagrin.

Then there’s this: When you’ve mastered arguably the toughest task in all of professional sports, those occasional failures can be tough to swallow. Joey Votto takes his hitting seriously. Those who try to mess with it, be warned.

This column originally misidentified umpire Bill Welke as his brother Tim. We regret the error.

17 Fearless (and Completely Arbitrary) Predictions for the 2015 NFL Season