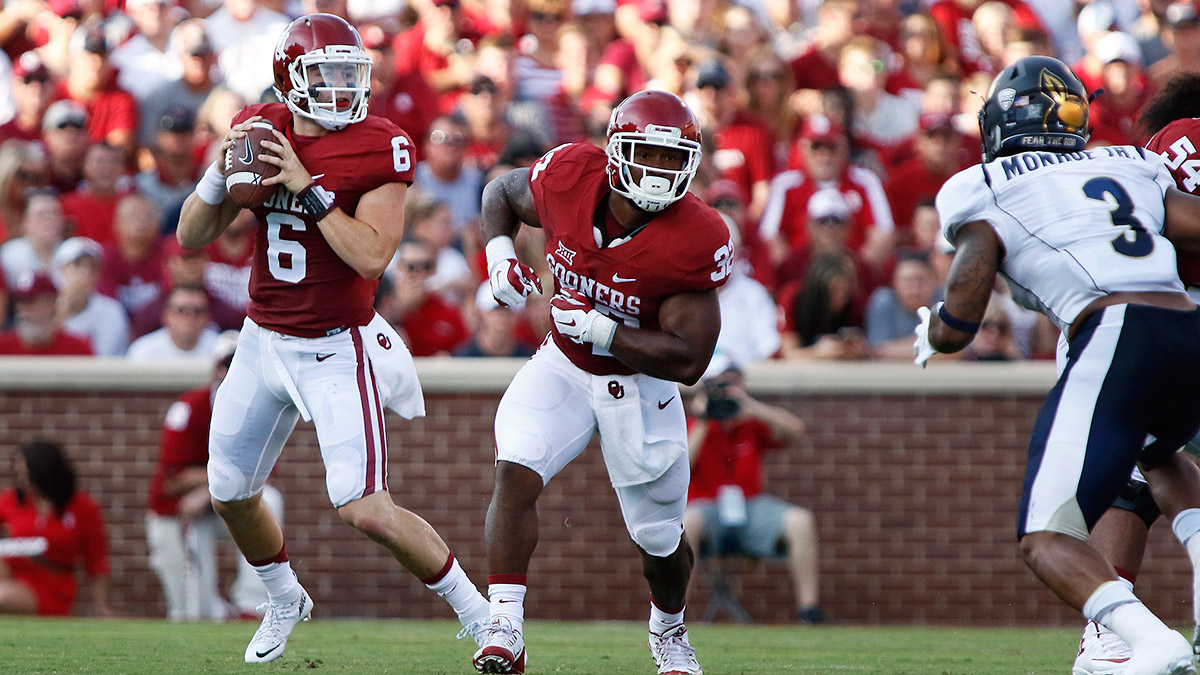 For most of its history, Oklahoma football was defined by a ground game worthy of the state’s hardscrabble self-image, and if before last season you’d offered OU fans a list of ways the 2014 campaign could unfold, “Most Productive Rushing Attack in a Generation” would undoubtedly have been a popular choice. And in the end, that’s exactly what OU got: The 2014 Sooners kept the ball on the ground for more yards (261.2 per game) on more yards per carry (6.1) than any previous offense under longtime head coach Bob Stoops, grinding out the kind of rushing numbers Oklahomans haven’t seen since the late-’80s heyday of the wishbone. Samaje Perine, a 5-foot-10, 230-pound true freshman built in the mold of an old-school, I-formation workhorse, led the Big 12 in carries, yards, and touchdowns, turning in a 1,713-yard debut that ranked as the fifth-best rushing season in school history.

If that seems like a strange way to begin an article about a team in the throes of an offensive identity crisis ahead of its first test of the season this weekend at no. 23 Tennessee, let it also stand as proof of just how tightly intertwined that offensive identity has become with potent passing stats over the course of Stoops’s tenure. In practice, the increased reliance on the run last season often felt less like an identity than an accident: Rather than serving as a foundation for the offense, it was a last resort after the more uptempo, pass-happy game plans that defined the best teams of the Stoops era began to fall into disrepair. A campaign that started with a no. 4 ranking in the AP poll and overt optimism following OU’s eye-opening, 45-31 win over Alabama in the Sugar Bowl ended at a disappointing 8-5.

The Sooners finished 0-4 against ranked opponents and fared poorly against their archrivals, barely handling a bad Texas team and blowing a late lead against Oklahoma State. In total, the home crowd witnessed an unheard-of three defeats. Quarterback Trevor Knight, the hero of the Sugar Bowl, responded to preseason Heisman hype by posting middling statistics before missing time late with a neck injury, and he returned just in time to throw three interceptions in the bowl loss to Clemson. The system still functioned well enough to yield at least 30 points in nine of 12 regular-season games,1 but tempo lagged, and by year’s end the one-dimensionality of the attack served mainly to highlight the gulf between the dwindling state of affairs and the good old days when the spread revolution seemed more … well, revolutionary.

“It was never a decision [to emphasize the run]; it just slowly evolved that way,” Stoops told me before the season. “In no one particular meeting did we decide, ‘Oh we’re just gonna do this.’ I think as much as anything we got probably a little too enamored with trying to run the quarterback, and then the quarterback gets injured, and we didn’t handle that as well as we needed to, either.”

To that end — and to his credit, given that he could have shrugged off the palpable frustration that followed the humiliation against Clemson as an overreaction to a temporary funk, or to injuries — Stoops responded instead with the boldest personnel decision of his career, sacking co–offensive coordinators Josh Heupel2 and Jay Norvell in the name of moving the offense away from what it did best in 2014 and back toward its roots in the Air Raid, the system that exemplified Stoops’s best teams during his first decade on the job.

Stoops attempted to rekindle the spark by importing then-31-year-old East Carolina assistant Lincoln Riley, one of the small army of Air Raid acolytes who spent their formative years at Texas Tech under pass-happy guru Mike Leach, who initially got his big break as Stoops’s first offensive coordinator in Norman, in 1999. Stoops also relegated Knight to the bench and promoted Texas Tech transfer Baker Mayfield, who sat out last year after attempting more than 40 passes per game in a gonzo version of the Air Raid during his freshman campaign in Lubbock. In the case of both the quarterback and offensive coordinator, the mandate for the clean break was clear: Ditch the zone-read, pick up the pace, and get the ball back in the air with the frequency that elevated Heupel, Jason White, Sam Bradford, and Landry Jones — a quartet that accounted for five conference championships, four appearances in the BCS title game, and two Heisman trophies — onto the short list of the most prolific college passers of the past 15 years.

Coaches certainly won’t be tempted (as they occasionally were with Knight) to treat Mayfield like a dual-threat athlete. At 6-1, 209 pounds,3 Mayfield lacks the statuesque, NFL-ready size that Bradford and Jones boasted, but he is decidedly a pocket passer. In last week’s season-opening 41-3 win over Akron, he connected on 23 of 33 attempts for 388 yards, including five passes that gained at least 25 yards and three that went for touchdowns. Combined with Knight (who was 5-of-9 in mop-up duty), the quarterbacks distributed 28 completions among 10 receivers, most notably redshirt freshman tailback Joe Mixon (the recipient of a 76-yard touchdown pass from Mayfield), touted junior-college transfer Dede Westbrook, and senior Sterling Shepard, a first-team All–Big 12 pick in 2014 despite missing most of the last six games with a knee injury. Shepard’s absence down the stretch coincided with the passing game going in the tank — “All of a sudden he’s not there, and that changes you,” Stoops said — and his healthy return may be the single most positive indication that the passing game has enough juice to keep pace with the likes of TCU and Baylor at the top of the Big 12.

Obviously, this weekend’s trip to Tennessee presents an entirely different challenge than a warm-up visit from a cash-strapped MAC tomato can. Last year, Oklahoma hung 454 yards and 34 points4 on the Volunteers in a comfortable win in Norman, a predictable result against a freshman-laden UT lineup still getting its feet wet; for much of Tennessee’s two-deep, that game marked their first college road trip. By contrast, the 2015 Vols are a more seasoned, up-and-coming outfit with a growing bandwagon and a golden opportunity to justify the hype against a brand-name power in Neyland Stadium. If anything, the prevailing national narrative entering Saturday night is more concerned with the trajectory of the home team: Upend the Sooners, and the buzz that’s surrounded Butch Jones’s program since the end of last season will reach a fever pitch.

For Oklahoma, though, there’s just as much to prove. The 2014 Sooners didn’t beat a major-conference opponent that finished better than 6-6 in the regular season (a group that includes Tennessee) and faded late — when the baby Vols began to make their move. While Tennessee is aiming for a climax, a coming-out party that will signal the end of seven years of frustration, Oklahoma would settle for a routine affirmation of the status quo — reassurance that the problem has been addressed, the ship isn’t sinking, and the Big 12 championship remains a viable goal. It’s a long year, but if the renovated offense looks like it’s already sprung a leak in its first serious test of the season, it’s going to begin to feel even longer.