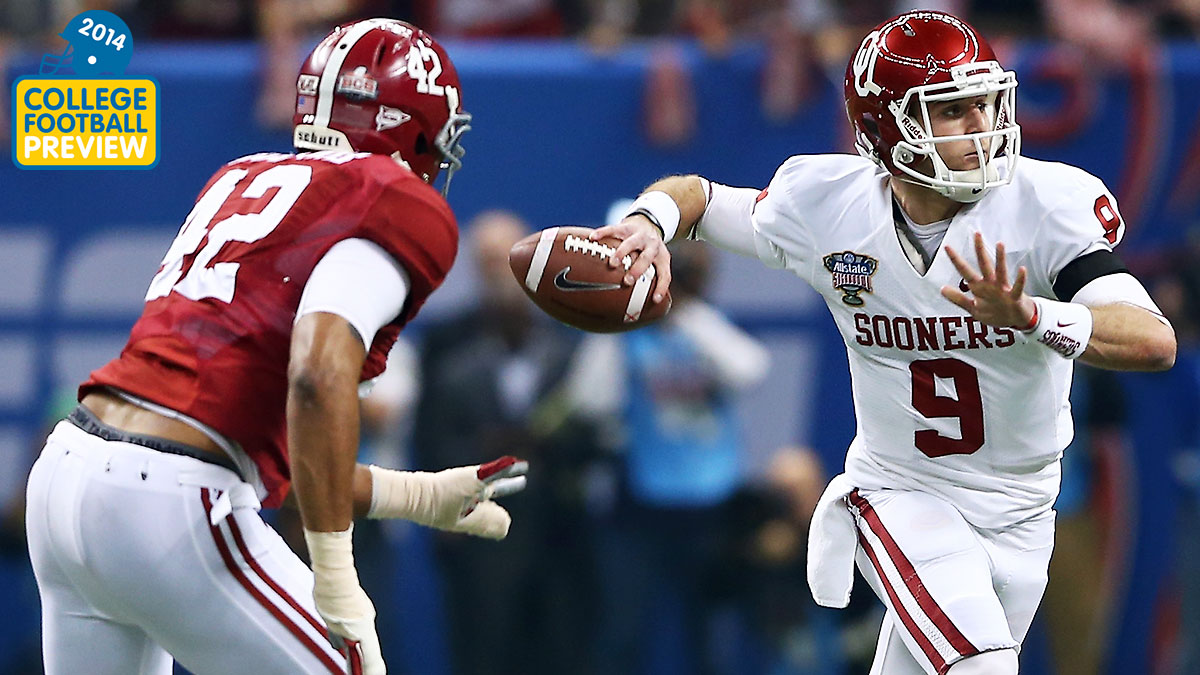 Yes, it was an unfair comparison. Of course it was. But how could it have been avoided? It wasn’t just that Trevor Knight vaguely resembled Johnny Manziel in uniform, or that Knight flashed a similar flair for embarrassing defenders on the fly. For a few weeks in December 2012, he actually was Manziel, charged with mimicking the newly crowned Heisman winner for Oklahoma’s starting defense ahead of the Sooners’ date with Texas A&M in the Cotton Bowl. If you believed his teammates at the time, Knight made them look as helpless in practice as the real Johnny Football eventually would in the game itself.

When coaches named Knight OU’s starting quarterback the following August, the parallels seemed even more explicit. Like Manziel, Knight was promoted to the first string as a redshirt freshman; like Manziel, Knight had surged past an older player who had been widely projected to win the job. A Sooner linebacker who had chased them both told a reporter before the 2013 season that “it [would] be the exact same” if Manziel and Knight traded places.1 Accordingly, by tabbing Knight, coaches were sending a clear message that they wanted to present defenses with a dual threat that Sam Bradford and Landry Jones, Knight’s statuesque predecessors, never even attempted to be. You know: If you can’t beat ’em, copy ’em.

And if all you saw of Oklahoma’s offense in 2013 was the grand finale, a 45-31 ambush of Alabama in the Sugar Bowl, you’d have to concede that those visions of Manzelian grandeur were right on the money. Opposite the most monolithically talented defense in the nation, Knight accounted for more total yards (355) and more touchdown passes (4) than any opposing quarterback except Manziel had managed against Alabama during the Nick Saban era. After an interception on OU’s first possession (on a pass that should have been caught), Knight led five consecutive scoring drives en route to a two-touchdown lead at the half. He fit throws into tight windows. He dropped balls over the top of the secondary. He bought time and conjured open receivers out of thin air. With a late assist from the defense, Oklahoma finished with more points against the Crimson Tide than any previous opponent in the Saban era. The Sooners arrived in New Orleans as 15-point underdogs and woke up the following morning — almost exactly one year removed from their Cotton Bowl humiliation against Texas A&M — with their best ranking in the AP poll (no. 6) in 29 weeks. Knight woke up on the short list for the 2014 Heisman. 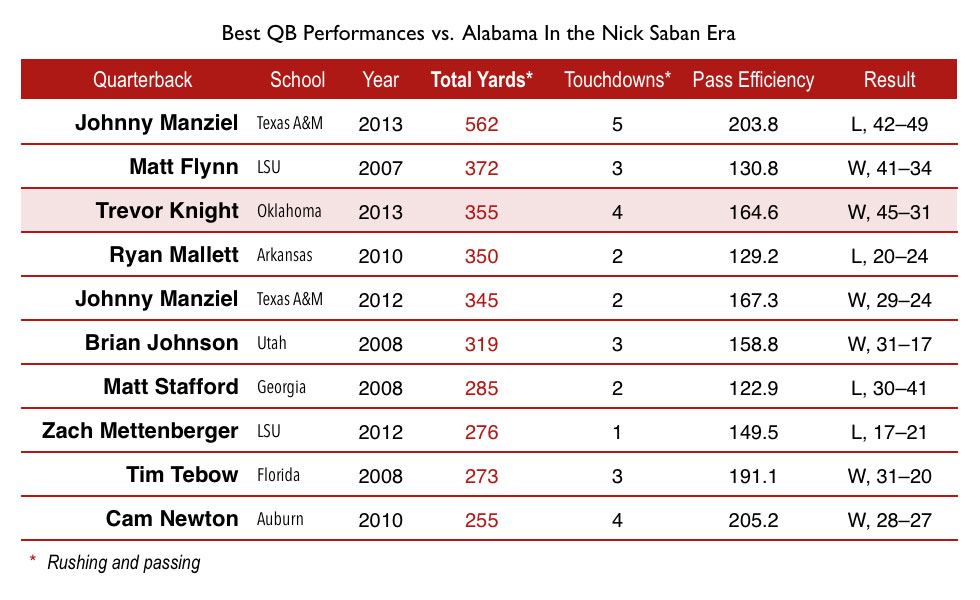 On the eve of the upcoming season, that’s still more or less where we stand. Far from sobering up over the intervening months, preseason polls seem to have fallen even harder for the Sooners, projecting Oklahoma as a near-unanimous favorite to win the Big 12 and a consensus front-runner for one of the four playoff spots set to replace the BCS this winter. The oldest brand in the business, Sporting News, commandeered the bandwagon by ranking the Sooners no. 1, as did three coaches who put OU at the top of their ballots in the coaches’ poll — a special kind of love for a team that lost its top three tailbacks, three of its top four receivers, and a three-time all-conference pick in the middle of the offensive line. Granted, a certain percentage of those votes were cast for the “OU” on the helmets, not a carefully considered endorsement of the depth chart. Still, to the extent that his team’s expectations in 2014 are a referendum on Knight himself as a redshirt sophomore, the hive mind has spoken. Just like his teammates who had to deal with him on the scout team, survey says the kid’s a star.

One word for that narrative is “momentum”: After three consecutive years as a bridesmaid in the Big 12 standings2 and diminishing returns in the national polls, the Sooners finally have a spark to rekindle the national stakes they’ve taken for granted for most of Bob Stoops’s tenure. Another way to describe it, for those of us who watched Oklahoma’s offense before the bowl game, might be “irrational exuberance.” Or “dubious.” Or simply “premature.” Can a single performance justify all of this?

Because in between the preseason hosannas and the fulfillment of the prophecy in the postseason, Knight was ordinary at best, and often worse. He struggled through his first start, an uninspiring win over Louisiana-Monroe, and was relegated to the bench by the end of his second, a 16-7 slog against West Virginia. Aside from a fleeting appearance at Notre Dame, he wouldn’t see the field again until coaches began to lose faith in Knight’s replacement, Blake Bell, in November.3 When Knight did return, it was to run an option-oriented plan cribbed from one of Barry Switzer’s playbooks circa 1982: In three starts against Iowa State, Kansas State, and Oklahoma State, Knight racked up nearly as many yards rushing (252, including sacks) as passing (260), completing just 25 of 41 attempts. At OSU, Knight was forced out at halftime by a wrist injury, leaving Bell to lead the game-winning drive — capped by Oklahoma’s only offensive touchdown of the day, from Bell to Jalen Saunders — in the final two minutes. In conference play, only Kansas passed for fewer yards per game or per attempt than Oklahoma. 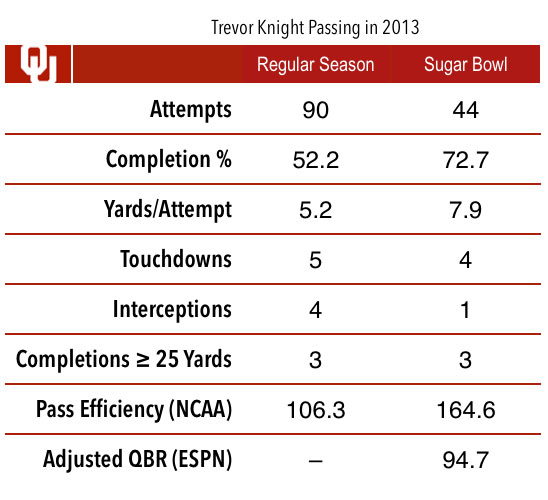 By kickoff for the Sugar Bowl, it was uncertain how much Knight would play against Alabama, or if he would play at all, and whether there would still be a place for him on the 2014 depth chart if he didn’t. Even after Knight’s MVP turn in the finale, and Bell’s subsequent conversion to tight end for his senior season, the “Belldozer” was the better of the two on paper in terms of completion percentage, yards per pass, touchdown-to-interception ratio, and overall efficiency. Knight’s efficiency rating for the season (125.0) fell a few points shy of the national average and ranked eighth among Big 12 quarterbacks who attempted at least 100 passes. Before the bowl game, that number was nearly 20 points lower.

Even believers who have installed Knight as one of the headliners of the upcoming season acknowledge the chasm between the erratic young passer Oklahoma fans saw in the fall and the confident, fully formed baller who rang in the new year. It’s much less obvious how to go about setting expectations that reconcile those two sides of the same player without ignoring one or the other. Did Knight manage to cross the chasm in a single month? And can he be relied upon to remain on the right side of it over the course of 12 or 13 games?

Optimists will note that Knight was burdened by two factors in 2013 that limited his potential. First, injuries: Between a bruised knee in September, which contributed to his extended midseason absence, and the wrist injury against Oklahoma State, he only played start-to-finish in three regular-season games. Second, youth: Manziel comparisons notwithstanding, as a redshirt freshman, a steep, often sobering learning curve is a predictable phase in the career arc of most starters, and not only quarterbacks. The Sugar Bowl saw Knight at his healthiest and most seasoned, and the results against a top-shelf defense speak for themselves.

Skeptics will require more convincing: Is the hype even fair to a player who didn’t attempt enough passes last season to qualify for the NCAA’s official passing stats? Offensively, Oklahoma was thoroughly mediocre in 2013, averaging fewer yards and points in Big 12 games than in any season since 2006. In the intervening six years, there was never a doubt with Bradford or Jones pulling the trigger that the Sooners were first and foremost a spread passing team; the 2013 edition, by contrast, never settled on a quarterback or a coherent identity. Knight is clearly the man in 2014, but is he more comfortable at the controls of an option attack, as the bulk of his résumé suggests, or putting the ball in the air 44 times, as he did in the bowl game? Is one game, even against Alabama, really enough to answer that question? And regardless of the progress at quarterback, is there enough reliable firepower among the new backs and receivers to achieve some kind of balance? For an Oklahoma outfit facing playoff-or-bust expectations, we know less at the start of the season than we don’t know. All we have for certain is a very high ceiling, and a sophomore passer who’s only scraped his head against it.