17 Fearless (and Completely Arbitrary) Predictions for the 2015 NFL Season 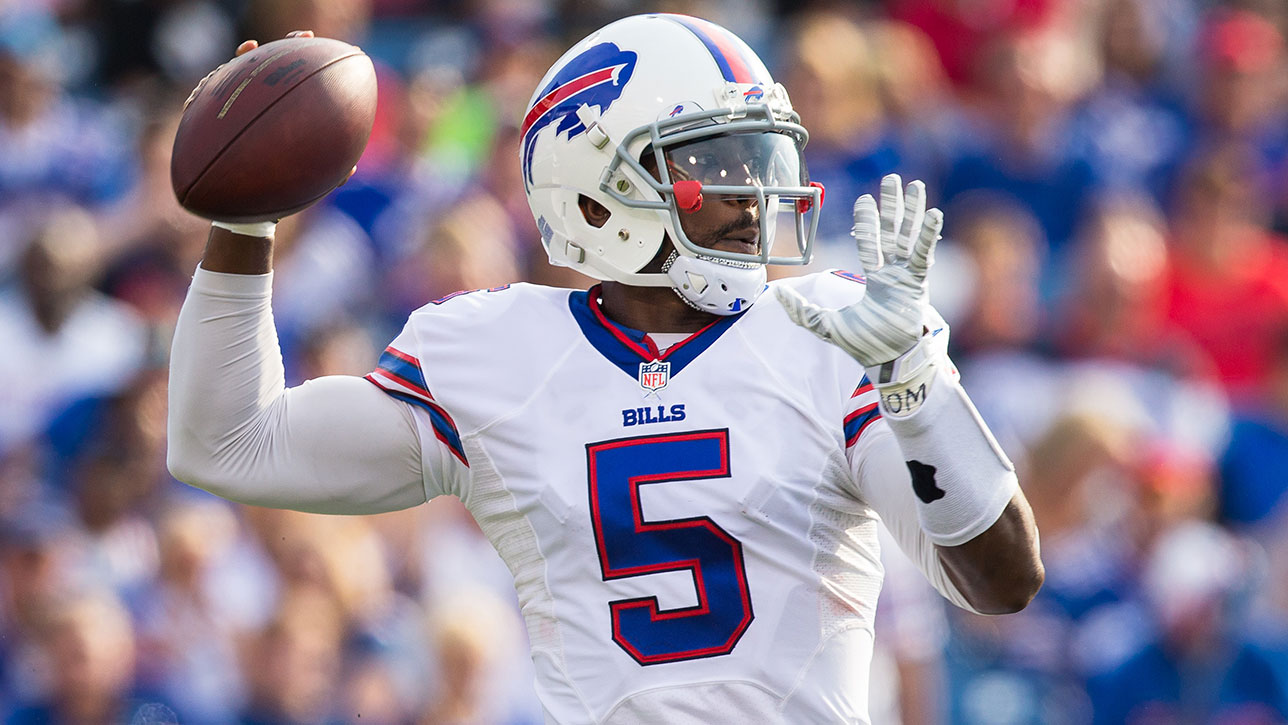 Summer is officially over as of last night. There are no more previews to read, and there are only games to watch. We made it.

I wrote about the state of the NFL yesterday, and with that out of the way, it’s time to share some reckless opinions on what this season will actually look like. If you’re looking for in-depth research and logic, just bail out now. If you’re looking for inexplicable confidence that will surely look regrettable in just a few weeks, well then hey, let’s do this.

1. Nelson Agholor will be the most productive rookie in the NFL. With all due respect to Jameis Winston and Amari Cooper, this competition won’t be close. First of all, he plays in Chip Kelly’s offense, which is basically like playing on the D’Antoni Suns. Second of all, the Eagles have gotten rid of every other potential superstar, so someone has to fill the void. Third of all, people have been sleeping on USC football as an NFL factory ever since Lane Kiffin took over, and it continues with Steve Sarkisian. The teams haven’t been very good, but the recruiting has been consistently great every year. In other words, if you’re looking for elite talent, let the other teams draft dudes from Alabama and Ohio State 10 spots too high, and wait for the USC guys to fall. This will be the ultimate lesson of Nelson Agholor. Most of all … I saw this Vine a month ago and made a mental note that Agholor will destroy people this year.

2. The Eagles will win the NFC East — and the Super Bowl. Don’t read too much into the preseason, unless, like me, you are a Cowboys fan who spent all summer making fun of the Eagles, only to quickly remember that Kelly still makes defenses look drunk no matter who’s on the field. There’s no way to explain it, but we should all probably fear it. I’m definitely scared enough to jinx them with this prediction.

3. Eli Manning will have a better year than Peyton Manning. I am one of the last people in America who think Eli is good, so maybe this is wishful thinking. Then again, Peyton Manning can’t feel his fingers, has nerve damage in his neck, is 39 years old, and couldn’t really throw last time we saw him play football. Maybe this isn’t as bold as it sounds.

4. L.A. is getting two teams. The Oakland Raiders and St. Louis Rams will make the Los Angeles “dreams” a reality this year, and what’s great about this is how nobody in any three cities will care.

5. Vince Wilfork will snap on J.J. Watt before this year is over. Let’s discuss two scenes from the first episode of Hard Knocks. One scene: a potbellied defensive lineman is chuckling through trash talk and playing pickup basketball with friends and family. Another: an impossibly well-toned human protein shake takes the field under the cover of darkness for a one-man bonus workout — in front of cameras and fans — to prove just how committed he is to Doing The Work. Now, can you guess which one of those men has two Super Bowl rings?

That’s right. Because sometimes the universe is great. 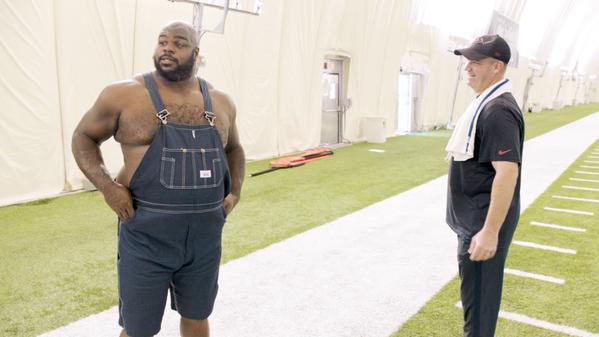 Maybe you can enjoy J.J. Watt as a destroyer of worlds on the field, but there’s a breaking point where the overwhelming corniness of his persona makes it impossible to care about anything else. That night workout was the breaking point for me. We get it, man. You’re committed. You do things the right way. Take it down a notch. All of which is to say, if/when Vince Wilfork body-slams J.J. Watt, it won’t be his fault.

It's almost here. For everything you need to know about the new season, follow all of Grantland's coverage.
6. The Raiders will be better than the 49ers. Carr Bombs to Amari Cooper, who was last seen embarrassing Patrick Peterson, plus Khalil Mack and a completely anonymous running back destined for inexplicable productivity (Latavius Murray). That’s all I need to know. Once every 10 years, the Raiders are decent. That season probably comes next year. For now, even half-decent at 8-8 should be enough to be better than the 49ers, who are coming off of the most disastrous offseason imaginable.

7. The Jaguars will be GOOD. Prepare yourselves. Start doing that Eagles chant with his last name. Tell your friends, hug your family. B-O-R-T-L-E-S. Gus Bradley seems like a good coach, T.J. Yeldon should be solid, Allen Robinson is due to break out. The pieces are there if Bortles delivers, and like the Raiders, there’s a blind-squirrel element to Jacksonville’s success. They’re due. Oh, and did I mention they have a Kiffin-era USC receiver (Marqise Lee)? The Jaguars are making the playoffs.

8. Tyrod Taylor will (almost) start a revolution. The Bills are putting together something special. It’s like they took “It’s so crazy it might work!” and made it the official team policy. The Sammy Watkins trade, EJ Manuel in the first round, LeSean McCoy, cutting Fred Jackson, hiring Rex Ryan to coach a team whose only problem is the one thing Rex has never been good at coaching — now it all hinges on Tyrod Taylor, a quarterback who wasn’t even very good at Virginia Tech. I’ve never loved a team more.

Bills fans feel the same way, and everyone is ready to prove the whole world wrong. It will almost work, and Taylor will reach cult-hero status halfway through the year, before reality sets in down the stretch and they go 8-8. I want to believe it will be better than that — the AFC East, playoff wins, the world — but there’s just no way this team will thrive after cutting Fred Jackson and destroying all of the good karma that their reckless decisions had bought them this offseason.

9. Tavon Austin will look extremely promising but then disappear as soon as we start paying attention. The St. Louis Rams experience.

10. Tyler Lockett will be what Tavon Austin could be with a decent quarterback. Or like Percy Harvin but without the fistfights.

11. For at least one week this year, Mike Tomlin and Kevin Sumlin will switch places and nobody will notice. And while we’re on the subject of college football, Derrick Henry highlights at Alabama will be more impressive than anything we see from an NFL running back all year.

12. The Lions: Nope. So many fun pieces, but between Matt Stafford’s ability to break dreams and a defense that’s due to crash back to earth, it seems like this will end poorly. Poor Lions fans.

13. The Dolphins: NOPE. They will look great when they beat the Redskins this weekend, and they’ll probably come into the Week 7 Patriots game at something like 4-2. Then the schedule gets real and it turns into another almost-good season that ends in disappointment. Poor [nobody really cares about the Dolphins].

14. The Chiefs are winning the AFC West.

Here is Andy Reid describing the perfect burger in alarming detail: “Then a nice slice of good, fresh Vidalia onion on it. Some mayo and ketchup. A little squirt of mustard but not too much. Pickles, lettuce and tomato and I’m ready to roll. … when you bite into it baby, it’s ecstasy.”

The Chiefs are winning 11 games this year, and it will be wonderful.

15. The Redskins will get the no. 1 pick. On the one hand, even reading that sentence induces a shudder when you think about what they might do to Cardale Jones. On the other hand … actually, there is no other hand. This is the darkest possible timeline and the single biggest reason to root for Kirk Cousins this year.

16. Jameis Winston will win a playoff game. There is more about Jameis here, so instead of rehashing that, this is a good time to share general picks for the playoffs that will look incredibly stupid in three weeks.

17. The Hayne Plane will fly right into your goddamn heart. Hey.

Guess who made the team?

Football is here, and the Hayne Plane is here.

This article has been updated to correct the projected NFC playoff seedings.

Watch Now, Watch Later: A Preview for Week 1, and the Season