Stopped on a Dime: Could Marshawn Lynch Be the NFL’s Last 10,000-Yard Rusher? 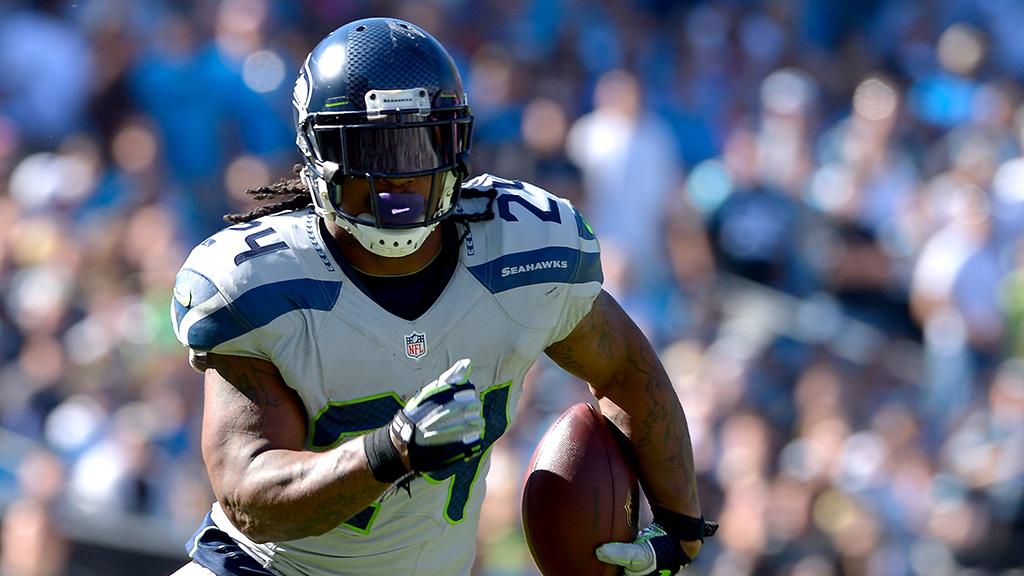 Asking Marshawn Lynch if there was anything he would change about last season would produce one pretty obvious answer. When the ball was in his hands, though, Lynch had a regular season worth imitating, with 1,306 rushing yards and a career-high 13 rushing touchdowns. If we copied and pasted that performance onto his next 16 games — if every lowered shoulder, every grabbed crotch were exactly the same — Lynch would squeak into an exclusive club this season with 10,001 career rushing yards.

Only 29 NFL players have exceeded 10,000 career rushing yards, and it would be a remarkable individual capstone for a former first-round pick whose career was resurrected in Seattle after being buried in Buffalo. What’s even more fascinating, though, is the larger context of that feat: If Lynch reaches that milestone, he might be the last player ever to do so.

On the surface, such a suggestion seems preposterous. Someone has reached the 10,000-yard career rushing mark in five consecutive seasons.1 But looking forward reveals that after Lynch and a handful of other candidates, the field is absolutely barren. It’s possible we’re simply approaching a historical blip, but there are indicators that larger changes to the NFL are taking their toll.

It’s no secret that teams are passing the ball like never before, largely the result of rule changes that help increase scoring — and theoretically increase fan interest, particularly from casual fantasy football players. The changes began with the emphasis on illegal contact penalties following the Patriots’ shakedown of the Colts in the 2003 AFC Championship Game, and continued with the 2010 introduction of personal fouls for hitting a defenseless receiver. At this point it’s a surprise that defenders aren’t flagged for shaking hands too aggressively with an opponent before the coin toss.

This combination of factors has made quarterbacks more and more valuable, while running backs are becoming a fungible commodity. Rushing attempts reached an all-time low last season, and those dwindling opportunities are being divided among more and more players as teams realize that the violent nature of the position makes it unwise to pay any one player a king’s ransom. Even if Lynch isn’t the last member of the 10,000-yard club, it appears that the rate of membership is about to decline drastically. Only a few active players have the proper combination of production (high) and age (low) to realistically approach the milestone, and each has his own concerns. With the 2015 season around the corner, let’s take a look at some of the candidates outside of Lynch:

This could have taken only one season in Johnson’s prime, which sadly wasn’t that long ago. The speedster averaged 1,328 rushing yards during his six seasons with the Titans, buoyed by a 2,006-yard sophomore campaign that produced unsustainable expectations. But after one nondescript season with the Jets, Johnson finds himself stuck behind Andre Ellington on the Cardinals’ depth chart.2 It’s hard to imagine a scenario in which we’re calling him CJ10K.

Forte hasn’t been the flashiest player, but that has made him the perfect running back for blue-collar Chicago, where he has been a model of consistency. Two more by-the-book seasons would be enough to break the 10,000-yard mark, but things get trickier with Forte in the final year of his contract. The Bears didn’t draft Jeremy Langford and Ka’Deem Carey for nothing, and Forte could find himself on a team with no regard for his past accomplishments.

Charles has impressively accumulated his yardage in essentially only five seasons, after playing sparingly as a rookie behind Larry Johnson and missing 14-plus games in 2011 after tearing his ACL in a freak sideline accident. But those missed games add up, and with Andy Reid hesitant to give any running back more than 250 carries, it will take three more solid seasons for Charles to reach 10,000 yards. And that’s much easier said than done at his age: Just ask Larry Johnson, who picked up two rushing yards in his age-31 season and two more in his age-32 season.

McCoy might be the best bet on the board. He just turned 27 and is the shiny new toy for a Bills offense seeking playmakers. That’s not to say McCoy is locked in to pass the 10,000-yard mark, though: Running backs who had more than 6,000 yards by age 27 but never reached 10,000 include Clinton Portis, Maurice Jones-Drew, Terrell Davis, and Ahman Green.

If Rice hadn’t lost the entire 2014 season to suspension because of a domestic violence case, he would likely be even closer than McCoy to the 10,000-yard mark. That derailment, though, is a harsh reminder that it’s impossible to predict the future, even for athletes who start their careers at a blazing pace. Rice’s athletic skills were declining even before the missed time, and if he isn’t picked up by a team (the Browns?) this year, his career total may not budge even one iota.

The situation is dire when the NFL’s 12th-leading active rusher is a backup quarterback on his third team in three years. While the top pick in the 2001 draft is still occasionally scrambling for first downs, however, running backs traditionally hit a wall once they reach 30 — only 30 players have recorded a 1,000-yard rushing season after their twenties. In any case, even the Madden 2004 version of Vick couldn’t pick up this many yards on the ground before retiring.

Bell has one huge advantage over fellow third-year running back Eddie Lacy, who is actually 96 yards closer to the goal: He’s 18 months younger. It also doesn’t hurt that Bell spent last offseason transforming from a portly college back into a lithe machine. If that revamped frame can withstand the years of pounding that await, he’s got a reasonable chance to hit 10,000 yards.

When the Rams selected Gurley with the no. 10 overall pick in this year’s draft, they ended a two-year drought during which no running backs were selected in the first round.3 As the run-pass balance has shifted, teams have decided that using a high draft pick on the position is often a bad investment (the Trent Richardson Rule). St. Louis hopes Gurley is the exception, although expectations for 2015 should be tempered with Gurley less than one year removed from ACL surgery.

You might be wondering why prominent names like Arian Foster, DeMarco Murray, and Alfred Morris didn’t make this list, and you might be realizing that the answer, again, is age: Morris has played only three seasons but is already 26, while Foster is 29 and Murray is 27. And none of those three is within even 3,500 yards of the 10,000-yard mark. Franchises now realize the benefits of cheaply churning through younger bodies, so while Fred Jackson may be the third-leading rusher in Bills history, the team tossed aside the 34-year-old last week.

The devaluation of the running game won’t ruin football, which is more popular than ever. Baseball certainly hasn’t suffered since Randy Johnson became a member of the 300-win club, despite fundamental changes like five-man rotations and specialized bullpens that suggest he may be the last to join that club. There are ramifications, however, when a sport evolves. Although nobody thinks any less of Earl Campbell because he finished his career with “only” 9,407 rushing yards, if the 10,000-yard mark becomes obsolete, it will be another reminder that the NFL is attracting fewer athletes who aspire to be the next great ballcarrier. That might not be preventable at this point, but it is unfortunate for fans of the combination of violence and grace that only running backs like Lynch can provide.