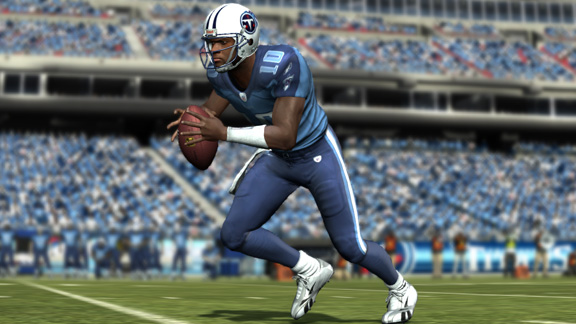 The Madden cover — and all that comes with it — feels like it’s been a part of football video games since football video games existed. We all remember how unstoppable QB Waggle was in Madden 94 and the joy of the late hits in Madden 95, but the honor and peril of landing on the cover of Madden has only been around for 15 years. It was John Madden himself who graced the cover’s foreground until 1999, when Eddie George was given the chance on the game’s first version of the new millennium.

On Friday, Richard Sherman became the 15th player to earn a spot on the official version of Madden (PC and next-gen versions don’t count here, people). We decided to use that occasion to rank everyone who has landed on the cover. This isn’t based on who was actually the best player, or who was best in that version of the game, or who had the best previous season. That’s all part of it, but it’s really a combination of them all. The actual rubric, well … there is none. So feel free to disagree wildly with any number of these.

This is why we can’t have nice things.

Madden 12 was the first year fans were allowed to vote for who’d be on the cover, and they landed on Hillis, he of the sub-1,200-yard season for Cleveland the year before. There are a few theories for why this was allowed to happen (most of them not worth getting into here), but suffice it to say the entire production was a travesty. Aaron Rodgers was fresh off a Super Bowl MVP and was already one of the five most exciting players in the league. That year should have been his.

Everyone wanted so badly for the Vince Young experiment to work, and him landing on the Madden cover after just one year is proof. After going 8-5 as a rookie starter, it felt like everyone in Young’s corner decided that not being an absolute disaster meant the year was a total success. That season was full of excitement for Tennessee — which had a six-game winning streak from Thanksgiving to Christmas — but it wasn’t all thanks to Young.

It was his best NFL season, and he still threw one more interception than he did touchdowns. The pick that year should have been LaDainian Tomlinson, who broke fantasy football that season, but apparently he wasn’t interested. My Plan B would have been Drew Brees: that great story with his first year in New Orleans, leads the league in passing yards, goes to the NFC Championship Game. It was the best thing about the NFL that year, and I say that after my team beat his to go to the Super Bowl.

They released two versions of the cover — one before Favre was traded to the Jets, and one after. That’s really all you need to know.

The Madden Curse had a delayed reaction for George. In 2000 he became the first player to supplant Madden as the face of the game, and he actually turned in the best season of his career: 1,509 yards, 14 touchdowns, and a first-team All-Pro nod. The problem was that the season brought its own curse, the one of 370 carries. George’s 403 attempts were well ahead of the benchmark typically associated with running back overwork. His production fell off a cliff the next season, and he was never the same again. The Madden Curse had its first victim, and the Curse of 370 had another.

Alexander suffered a similar fate. He hit 370 on the nose during his 2005 MVP season. The next year, as Madden’s cover model, his rushing total dropped by nearly 1,000 yards. The Madden Curse may not be real, but the punishment from actual football definitely is. 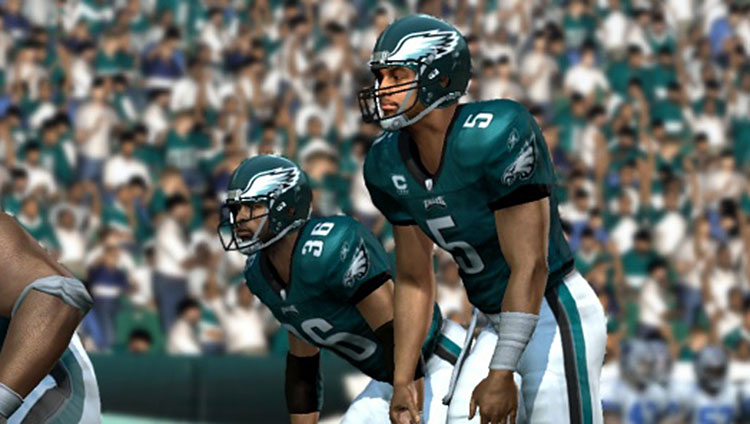 I get that the Eagles went to the Super Bowl the year before, and that those teams in Philadelphia were a staple of the NFL in the early 2000s, but this just seemed like an uninspired choice. Part of that isn’t McNabb’s fault. This was the cover following Peyton Manning’s 49-touchdown year, but he apparently turned down the offer. Daunte Culpepper would be next in line, after throwing for more than 4,700 yards and 39 touchdowns and generally being awesome, but he’d already gotten his turn four years earlier. So, we were left with McNabb. It’s hard to really get excited about that.

The best argument for Lewis’s spot here is that the year marked Madden‘s 20th anniversary, and it’s hard to disagree with making the best defensive player of that generation the first one to go on your cover. Lewis also won his second Defensive Player of the Year award the season before he got his nod, which makes it a little easier to take this as his spot rather than after his 2000 season.

The problem here is that few people actually enjoy playing defense in Madden. No one picks their team based on who’s playing middle linebacker, even if that linebacker is Ray Lewis.

That same logic holds true with Sherman, but it also feels like it could have been no one else but him this year. He’s been everywhere since the NFC Championship Game, and he really was the dominant personality on what turned out to be a historically dominant team.

This year’s voters actually deserve some credit. They’ve come a long way since the Hillis debacle. The final four was Cam Newton, Andrew Luck, Sherman, and Colin Kaepernick. Personally, I feel like LeSean McCoy — maybe the perfect point on the relevance/excitement axis in the NFL right now — deserved a spot over Kaepernick and was given an impossible road to the title with Luck and Newton on his side of the bracket, but it’s hard to complain. Ten people in the history of video games have started a defensive play controlling a cornerback, but Sherman has a good case.

The reason I was in favor of McCoy in this year’s game is the same reason I’m more than OK with Sanders taking it home last time around, even after Adrian Peterson’s monster 2012. For the question about which historical player would be the most fun to use in the modern versions of Madden, I think Sanders might actually be the right answer.

I’ve changed my mind about this one over time. It almost feels like picking two players is the easy way out, but that year it worked. The Steelers-Cardinals Super Bowl is maybe my favorite one ever, and by the end of that year, these were probably the two most enjoyable players to watch on their respective sides of the ball. Polamalu was an All-Pro, and do you remember Fitzgerald in those playoffs? His worst game was in the wild-card round against Atlanta — he had six catches for 101 yards and a touchdown. He seemed ready to take over the entire league. Then Derek Anderson showed up. 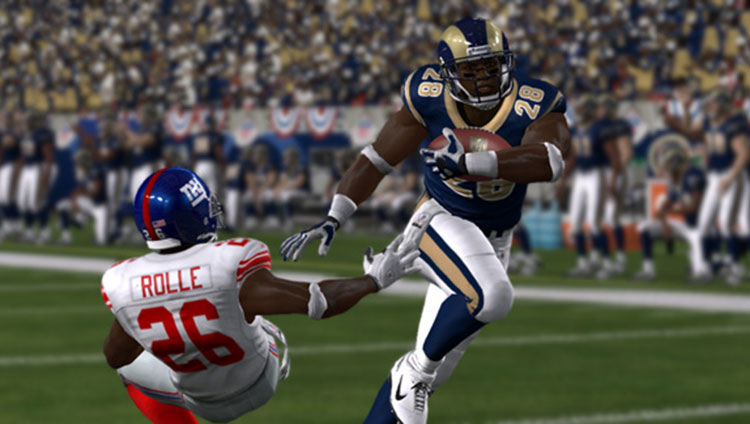 There’s a reason that when the all-time Madden team came out last year, Faulk was the running back. He was maybe the best player in the NFL when the PlayStation 2 and Xbox were first released, and even though his cover probably came a little too late (2002 was the first time in four seasons he hadn’t hit 2,000 yards from scrimmage), his video-game legacy earned him a spot.

Like I mentioned earlier, I think Brees deserved the Madden 08 cover, but this works too. Brees is the only sure-fire Hall of Fame quarterback to be on the cover, thanks to Manning and Brady deciding to pass. Brees’s name is the first one anyone mentions after those two. You can’t go wrong with that. His chance coming after a Super Bowl win and the culmination of him resurrecting both his career and football in New Orleans just makes it that much more appropriate.

I’m not sure how much explaining is necessary here. The best wide receiver since Jerry Rice. The best non-quarterback offensive player of his generation. The owner of one of the fleeting few great nicknames left in professional sports. Megatron was a no-brainer for the cover two years ago. Credit where it’s due, voters.

It’s impossible to separate early-2000s Culpepper from early-2000s Randy Moss, but really, do we need to? Culpepper’s spot on the Madden cover was the actual version of what we wanted to be true for Young — a first-year starter who, in a single season, became one of the most exciting players in the league.

Culpepper threw for nearly 4,000 yards and 33 touchdowns in his first season as a starter. Fourteen of those went to Moss. Watch this throw from the Thanksgiving game in Dallas that year. That video belongs in the Smithsonian on a loop.

This is where the criteria for most of the other rankings kind of goes out the window, and I’m not really going to apologize. Vick was mediocre in 2002, his first year as a full-time starter, but Vick Mania was such that he still went to the Pro Bowl, despite throwing for less than 3,000 yards.

The Madden folks took their opportunity as soon as they could. In Vick’s second year as a starter, he was already on the cover. The result was a sort of self-fulfilling prophecy. The developers at EA turned Vick into an unstoppable, game-breaking machine in Madden 2004. There were unwritten rules against using him online. There were judgments levied against any friend who dared to even linger on the Falcons on the team selection screen. In private, though, we all played with Atlanta, taking off with Vick whenever we had a chance. As Bill Barnwell wrote in his IGN days, no player in Madden history has a video-game legacy like Vick in the fall of 2003.