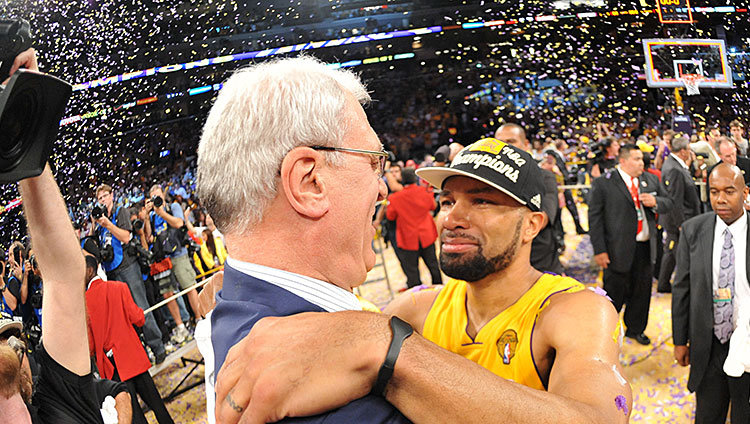 To make things even weirder (and for the Knicks that’s saying something), some of the names being bandied about the sports-talk ionosphere for assistant coach positions are these: Kurt Rambis, Party Down star Rick Fox, Luuuuuuuuuuke Walton, and Bill Cartwright. My long-held dream of seeing the human white man’s overbite, Mark Madsen, on the Knicks’ sideline still draws breath.

The Knicks’ particular big-market pathology has historically been the acquisition of players whose names look great on the building marquee. The franchise tried to sign a 39-year-old Wilt Chamberlain in 1975; paired Earl Monroe with Clyde Frazier in a gamble that paid off; paired Spencer Haywood with Bob McAdoo in a gamble that didn’t; and tried multiple times over the last 13 years to land Phil Jackson as coach before Eagles manager Irving Azoff and his all-terrain vehicle vision quest finally got it done.

The James Dolan era took this existing predilection, distilled it down to its essence, and smoked it in a crack pipe using lit $100 bills. While previous Knicks regimes chased name players, they also seemed to know some details about those players beyond just their names.

Under Dolan, the Knicks are a guy in a restaurant who says, “Give me the most expensive thing you got” without opening a menu, then expresses surprise when a ramekin of rare fish eggs arrives at the table. Things are expensive, therefore worth having, and if they aren’t expensive, well, just make them so. Allan Houston’s $100 million extension? Great. Jerome James just played five good games for the first time in his career? Pay the man. A soft-rebounding center with a possible heart condition? How many times can I bid against myself for his services?

With MSG as Dolan’s personal fiefdom, that traditional process of star acquisition also became wrapped in layers of opaque absurdity that have become the team’s trademark. The Garden’s draconian media restrictions meant the best that Knicks watchers could do to try to understand why in the fuck any particular move was being made was, essentially, to guess.

What, exactly, did Herb Williams do to deserve his MSG sinecure, and why was he on the coaching staff for 10 years, under six head coaches, while taking the reins himself twice? No one knows. Why waste a valuable roster spot on J.R. Smith’s brother Chris, whose D-League numbers suggest a long career in the second division of the Adriatic League? No one knows. Glen Grunwald did a mostly nice job within a narrow window of time and money, assembling pieces around the Amar’e/Melo/Tyson salary-cap triptych and presiding over a 54-win season, so definitely fire him, I guess. I’m sorry, I mean “reassign” him to not doing his previous job. Steve Mills’s last stint at MSG was mostly notable for the losses, the fans wearing paper bags over their heads, and an embarrassing sexual harassment suit, so mos def rehire him, but this time to run the basketball side.

Haywood and McAdoo on the same team? Sure, it was dumb in hindsight, but understandable using the formulation: Those guys scored a shit-ton of points. Three draft picks for the lumbering, flat-shooting, sub–league average Andrea Bargnani? Inexplicable.

So, I view Jackson making personnel decisions by essentially going down his Facebook friends list as extraordinarily good news. Forget, for a moment, the admittedly weird mental imagery of Fox as an assistant coach; or the idea of paying Fisher more than he made in his last three years as a basketball player to do a job he’s never done before; or Walton just in general, like, as a human being who exists. What these potential moves — and the failed Steve Kerr attempt before them — signify is Jackson having the freedom, at least for now, to do whatever the hell he wants.

And isn’t that what Knicks fans have been waiting for? For Dolan to finally surrender control?

Here is where, if one wanted, one could argue the glass half-shattered position and say, “Well, if Dolan was really giving Phil a free hand, why did the team lowball Kerr?” The reported deal they offered Kerr was $13.2 million over three years, which comes to $4.4 million a year, or a little bit more than the criminally underpaid Tom Thibodeau makes. Why didn’t the Knicks up their offer after Joe Lacob parachuted in with a godfather offer clenched in his teeth? Maybe because it was clear Kerr didn’t really want the Knicks job and Jackson didn’t think Kerr was worth that.

Yes, the Knicks have now given Fisher the same five-year, $25 million deal that the Warriors gave Kerr. To me, that implies Jackson not wanting to whiff on his second choice for head coach more than it implies Dolan cranking his Telecaster back up to 11. (Caveat: I have been wrong before.)

What the hiring of Fisher and the get-the-band-back-together nature of the prospective assistants shows is Jackson’s desire to shape the on-court tactics and philosophy, without all the fuss and bother of actually being the coach himself. He’s entering a corporate atmosphere riven by competing ambitions and bald-faced nepotism, described by levelheaded reporters as a “snake pit,” “toxic,” and a “gulag.” Isn’t the rational thing to do when taking a job with a franchise that’s become a symbol of institutional incompetence to surround yourself with people who you trust completely, and worry about their experience later? Of course it is.

If you’re a Zen Master trying to reform a soul-dead wasteland, you don’t need high priests; you need acolytes. And if Jackson’s freedom to make moves translates to on-court success, who knows, maybe it even lasts.