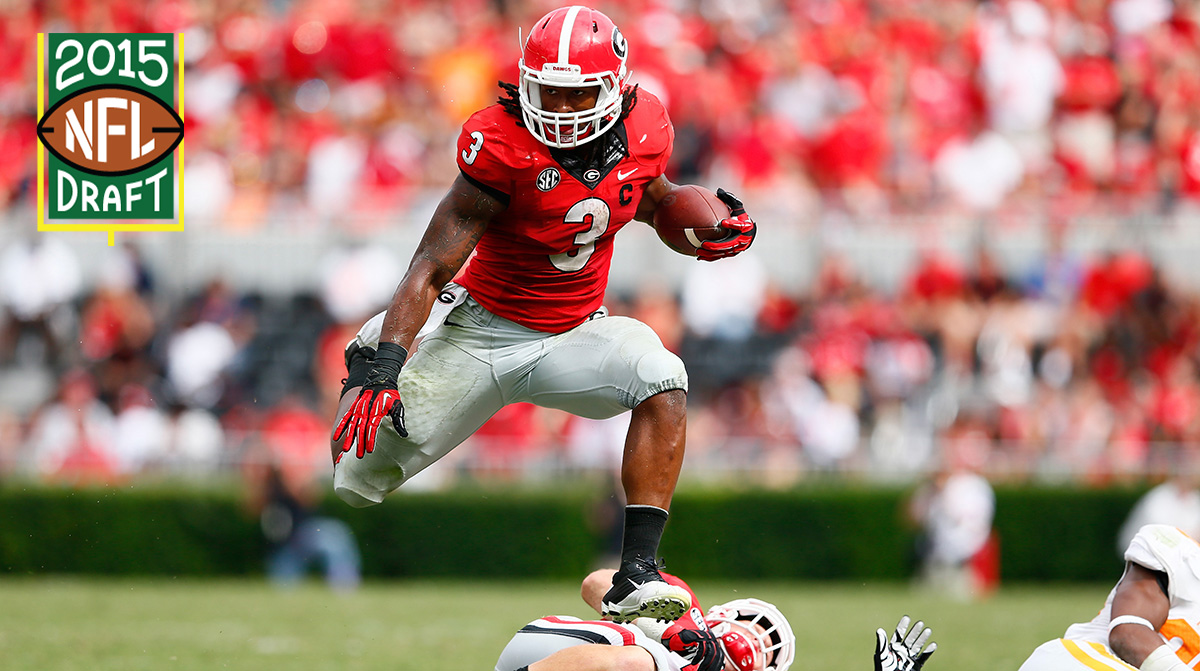 It was no surprise that when Minnesota Vikings general manager Rick Spielman stepped to the lectern at this year’s combine, nearly every question he faced concerned Adrian Peterson. The future of the most visible Viking of the past decade was in question, with doubts about both his status with the league and the shrewdness of a 30-year-old running back chewing up more than 10 percent of Minnesota’s salary cap this fall. For any average back, there wouldn’t be much hemming and hawing. Most players with Peterson’s burdensome baggage — aging, accused of child abuse, and in possession of an onerous contract — would be gone without a second thought. But we’re talking about Adrian Peterson, which makes it a different matter entirely. Spielman reminded all in attendance of that more than once. He referred to Peterson as “unique” five times in less than 10 minutes.

That same word came up again when Spielman was asked about another subject: this year’s crop of running backs. “I know there are some pretty unique running backs coming out in this draft class,” Spielman told reporters. “I’d be surprised if a couple of these guys may not go in the first round, but we’ll see how this whole process goes through.” His response was to an inquiry about the lack of running backs taken in the first round in recent years. And although it’s an answer caked with personnel-man banality, the subtle message was similar to the one he gave about Peterson — sometimes there are exceptions. As the draft creeps closer, a central question has emerged: Does Todd Gurley deserve to be one of them?

Now medically cleared after suffering a torn ACL in November, Gurley has rocketed up mock drafts in the past week. Considering how Gurley’s abilities have been touted since last fall, that’s to be expected. In terms of overall talent, many — NFL personnel legend Gil Brandt, ESPN’s Todd McShay, NFL Films’ Greg Cosell — see him as one of the five to 10 best players in this draft. Before last week, there were two concerns that had pushed Gurley further down the mock draft boards than he might have deserved. The first was his health, a worry that’s faded a bit but will still likely influence some teams. The second is the growing gap between a running back’s ability and the degree to which he can affect a game in today’s version of the NFL, a conversation that seems to pop up around draft time every year. Gurley presents the most intriguing test case in years. 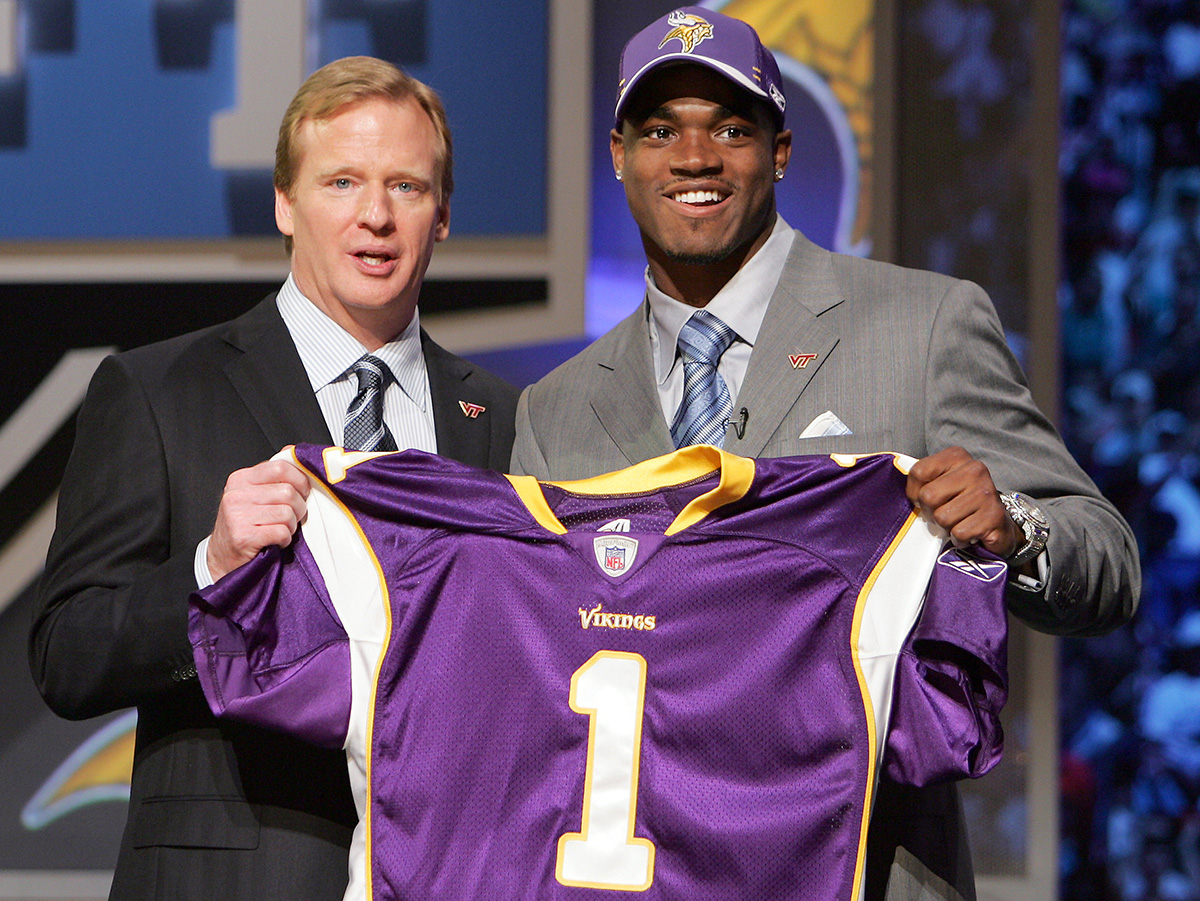 Running back value has been a subject of interrogation in recent years in NFL circles, and for one big, obvious reason: simple math. Teams are just running less and relying on the running game for a smaller chunk of their offensive production. From 2005 to 2009, teams ran on 42.6 percent of their plays, leaning on the run for 35.3 percent of their total yards. Over the past five seasons, those rates have dropped to 39.5 and 33.1, respectively. With even more passing, a desire for talented third-down running back options has only increased. Backfields run in platoons more often than not, which has become another reason not to dedicate significant resources to any one runner.

Even with teams that have handed a single back most of the work, sustainability is a factor. In the past 10 years, only five backs ­— Peterson, Arian Foster, Chris Johnson, Thomas Jones, and Marshawn Lynch — have more than three seasons of 1,200 yards or more. Only Peterson has more than four. The running game simply isn’t the most effective way to build an offense anymore. Last year, teams averaged 0.08 expected points per play when throwing, compared to minus-0.04 on runs. If you’re building a franchise from scratch, there’s a good chance your priority isn’t figuring out how to run the ball effectively.

There were a few teams, though, that pushed back on that idea last year. The Seahawks led the league in rushing DVOA and became one of the best rushing teams of all time; the Cowboys were one of the six teams to finish in the black in EPA/play when running the ball, and no team in the league ran more often. That two of the best teams in football last year were built around running the ball shows that it’s possible, but the disparity in how those teams did it muddles the running back problem even more. The Cowboys have spent the past four years stockpiling blue-chip players for their offensive line, starting with Tyron Smith in the 2011 draft and then Travis Frederick in 2013 and Zack Martin in 2014. That’s where Dallas made its investment, which Jerry Jones and friends made clear when they let the league’s leading rusher leave for a division rival this year. DeMarco Murray finished the season averaging 2.84 yards per rush before contact, good for fifth in the league among running backs. He’s a tough, downhill runner and perfect for what the Cowboys wanted him to do, but when they allowed him to walk, it was proof they didn’t see him as a transcendent talent. They can find someone else to do that job.

The same wasn’t true in Seattle. Marshawn Lynch’s line actually had a similar pedigree to the one in Dallas — two first-round picks and two second-rounders — but that group never came together quite like the Cowboys did last year. Lynch finished 25th in yards before contact per rush — right between Chris Johnson and Andre Ellington — while finishing second in yards after contact per carry. He again led the league in broken tackles, comfortably. It’s not as if Lynch is without advantages in Seattle. Only LeSean McCoy had more carries off read-option plays, and the threat of Russell Wilson as a runner gives Lynch room he wouldn’t have otherwise. But overall, Lynch is one of the few backs in the league whose impact can be separated from the talent of his offensive line or teams tailoring their defense to stop the pass.

Those backs aren’t easy to find. In the past 10 years, 12 running backs have been drafted in the top half of the first round, where some expect Gurley to come off the board tomorrow. Two have become elite talents who can affect a game no matter what: Lynch and Peterson. Even beyond first-round picks, there aren’t many backs who can be effective in dire circumstances. Jamaal Charles probably deserves that title, but even a player like Arian Foster has gotten plenty of help from solid lines and an effective zone-blocking system over the course of his career.

The Peterson-Gurley comparisons were inevitable. People will take out the tape measure for any back considered talented enough to go in the top 10 and try to figure out whether he’s the best prospect since Peterson came out of Oklahoma. That didn’t turn out very well for the last guy who got that kind of praise, but even if the same is true for Gurley, it doesn’t matter. Peterson, whose best matches what any running back has ever accomplished, is an impossible standard. Because his route to stardom was more circuitous, people forget that five picks later in that 2007 draft, Lynch went off the board to Buffalo. It took a team change and some time, but Lynch eventually became one of the few backs in the league’s highest class. For those trying to envision Gurley’s ideal career — in terms of running style, physical makeup, and ceiling — Lynch actually might be the better fit.

If a team is going to take Gurley in the first round, it’ll be looking for a Lynch-type impact if it’s going to get a return on that investment, a runner who can make his offensive line look good even when it isn’t. That kind of back still has a ton of value, and when you consider the teams that have been linked to Gurley so far, they make a lot of sense. 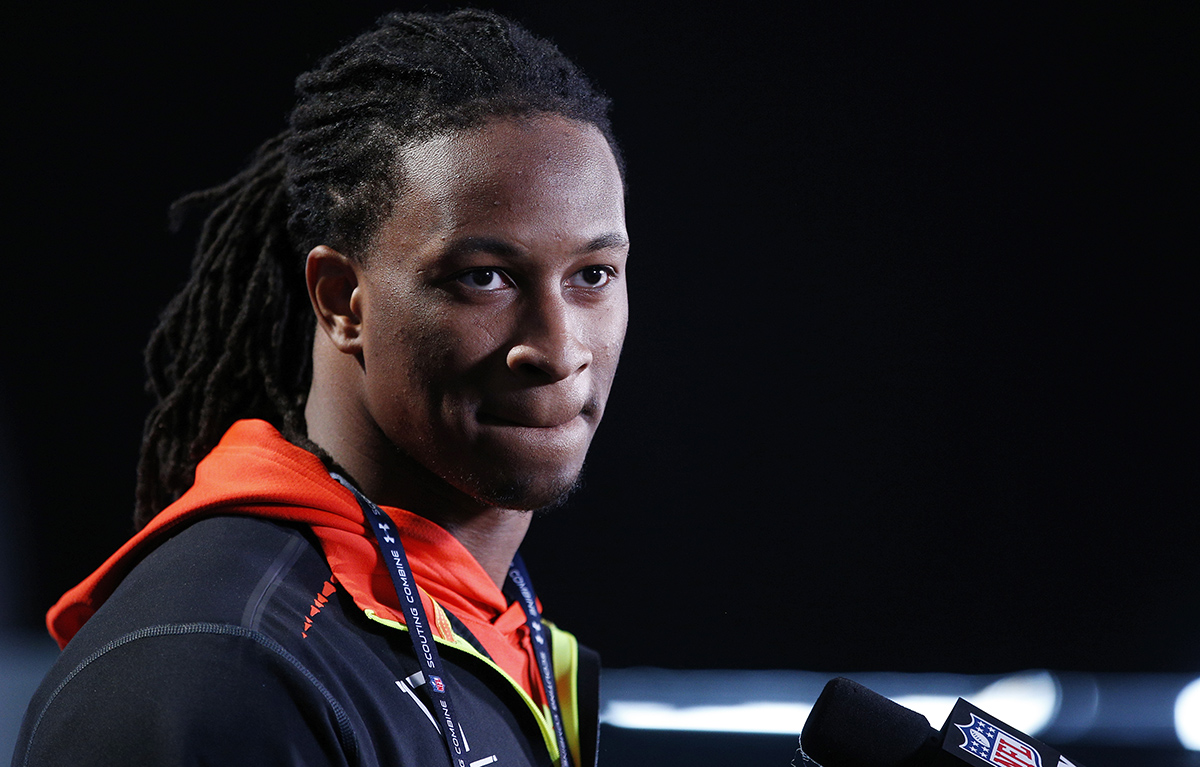 Arizona and San Diego finished 30th and 25th in rushing DVOA last season, respectively. Both brought in high-priced free agents at left guard, but each still has question marks at two of their interior line positions. The Chargers are built around their passing game and Philip Rivers, but an instant jump-start to their running game via Gurley would be a way to protect a 33-year-old quarterback who ground to a halt at the end of last season because of the beating he’d taken all year. Arizona would be an even better fit. Even with Carson Palmer healthy next season, the Cardinals’ passing game isn’t exactly terrifying. With newly signed guard Mike Iupati and Gurley, Arizona could cobble together a respectable-enough running game to pair with its already excellent defense. It may be too high, but the Jets at the no. 6 pick would make sense for exactly the same reason. New York is still in the market for another interior lineman, even after signing James Carpenter, and although they’ve added plenty of talent on the outside, there’s still enough uncertainty at quarterback that slotting in a game-changer in the backfield might help make Chan Gailey’s offense viable from day one.

If he is taken in the first round — whether near the top or as low as no. 24 — the question will be whether Gurley is good enough to warrant bucking the trend and selecting a running back earlier than anyone has in years. Based on his performance in college, his physical makeup, and everything I’ve read about him, Gurley feels worthy of one of the first 32 picks — and probably one of the first 16 — but there’s far more to that decision than simply having a need at running back. The Cowboys didn’t have an interest in re-signing an elite runner like Murray; why would they spend a first-round pick on a player like Gurley? Likewise the Baltimore Ravens, who just signed journeyman runner Justin Forsett to a three-year deal. It’s teams like the Cardinals, Chargers, and Jets would seem to make the most sense: teams with deadlines, deficiencies, and potential disasters.

If Gurley really is as good as some think — a back on the level of a Marshawn Lynch — his value comes from being able to overcome what a team doesn’t have, not from taking advantage of what it does. The value of running backs may have fallen off, but players of that caliber, the truly unique ones, will always be exceptions. They just don’t come around very often.

The Hamilton Papers: The Complicated Reunion of Josh Hamilton and the Texas Rangers