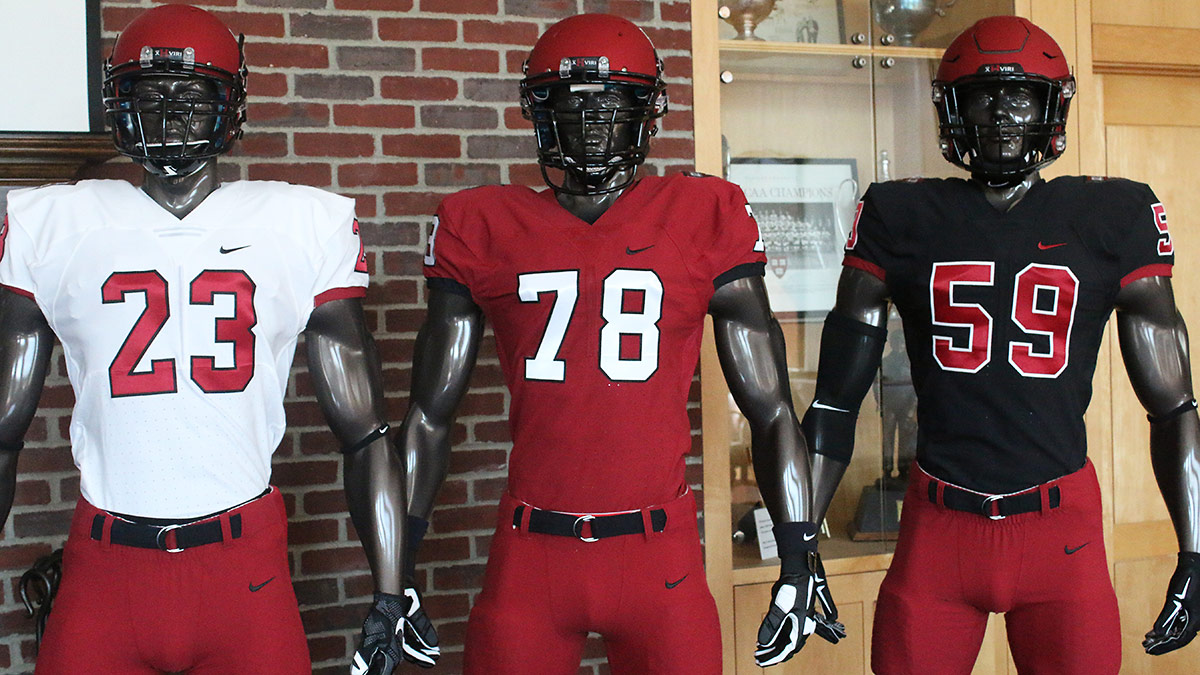 The Harvard coach, who’s entering his 22nd year working daily in and around the Crimson’s 112-year-old home, Harvard Stadium,1 believes there’s a common misconception about his players:

“It’s amazing. These kids are supposedly Ivy League, sophisticated kids,” he says, but “they’re not [just that]. They’re regular kids.”

Make no mistake, Murphy has coached his share of academic achievers, including one recent offensive lineman turned astrophysicist. But they are still 18- to 22-year-olds, and like all of us, they love to get new gear. So when Murphy recently surprised the team’s seniors with new uniforms, “all of a sudden they were 10 years old again.”

With nearly 80 of 128 FBS schools — more than 60 percent! — having redesigned some aspect of their uniforms for the 2015 season, it may not seem surprising that FCS Harvard is, too. But, of course, change does not always come easily to the nation’s oldest university. Prior to 2015, the last update to the Crimson’s gridiron garb came shortly after the Kennedy assassination. Man has walked on the moon more often than Harvard has redesigned its uniforms.

So why did fusty Harvard decide to join the new-threads game? And what, if anything, does that mean for the rest of football’s uniform purists? 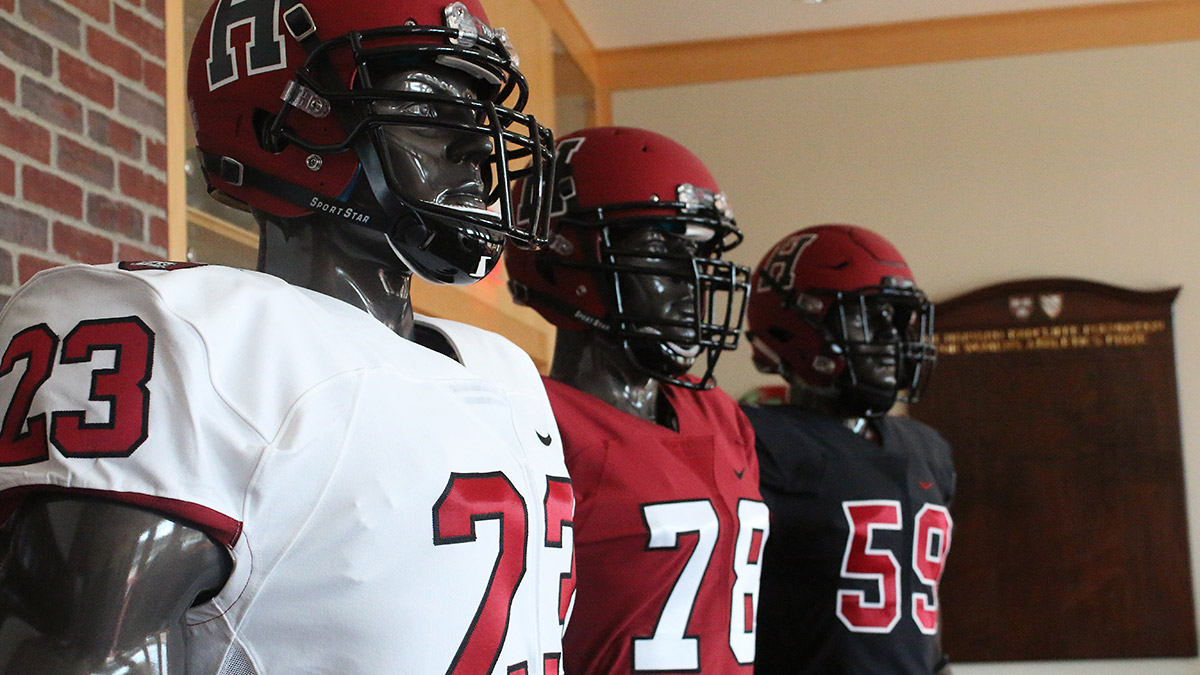 On that day 14 decades ago, Tufts beat Harvard, 1-0,3 in one of the first intercollegiate games of what would eventually become what we would recognize today as American football. More importantly, for the sartorially minded, the Crimson were “adorned in the school colors, with a uniform of white shirts and pants, with crimson trimming and crimson hose” — the first time a team had been outfitted specifically for football, at least according to Harvard. (Ask Princeton about that, however, and you’ll likely hear that the Tigers wore the first specially designed duds.)

For almost as long as there has been football, there have been uniforms. And through the years, change has been a constant in the game and the getups alike. And since Oregon grad and Nike cofounder Phil Knight started pumping money into his alma mater in the late ’90s, the uniform carousel has sped up from a leisurely spin to a blinding blur of color.

“When I started doing this kind of work, colleges changed their football uniform design once a generation or once a decade,” says Paul Lukas, the proprietor of the Uni Watch blog. “The cycle kept getting faster. Some schools now seem to change every year, and some seem to change every game.”

The new Crimson uniforms are unlikely to revolutionize the field. After decades with one look — crimson jerseys with white numbers and black trim and gold pants at home, white jerseys with crimson numbers and crimson trim and gold pants on the road — Harvard has added crimson pants, a black jersey, and a new matte helmet design that removes the striping and adds “10,000 Men of Harvard” on the back in English and the front in Latin (“x̄ H viri”). The new unis will be on display starting September 19, when the Crimson kick off the season against Rhode Island.

“Honestly, it’s not that remarkable a uniform,” Lukas says. “It’s pretty standard. It may not be standard for Harvard, but it’s not a groundbreaking, tradition-shattering change.”

That was by design.

“But it’s like anything else, you evolve or you die. And we could still be in the single wing, but we’re not.” 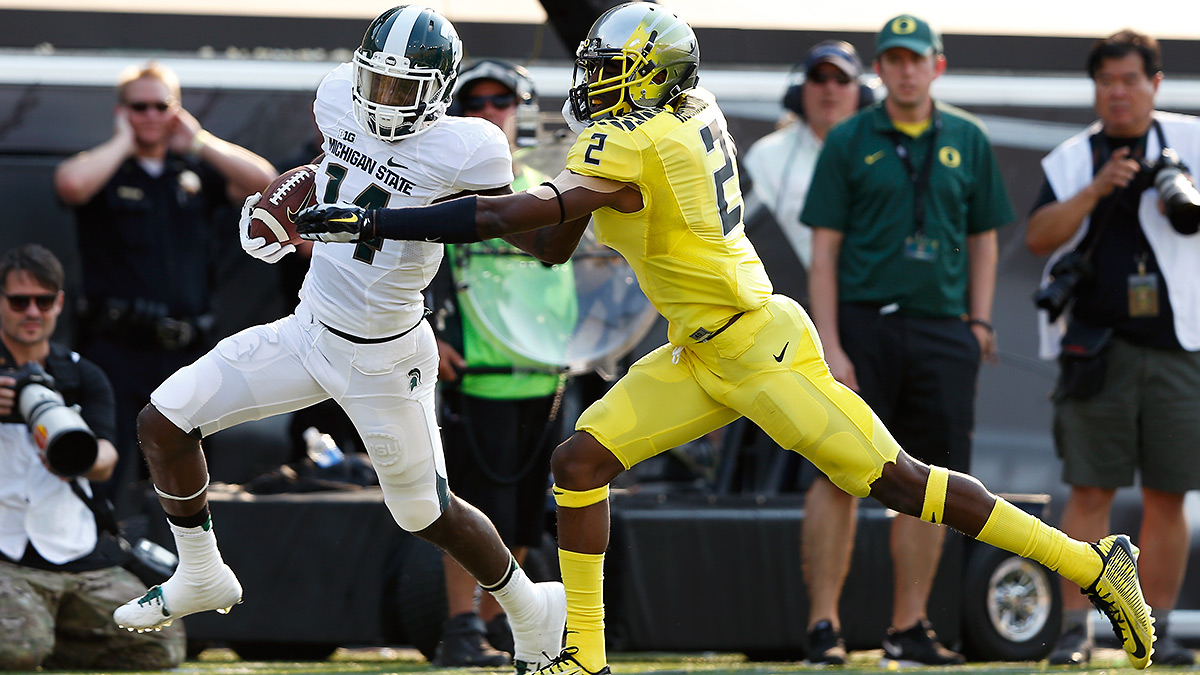 Yes, Murphy says, current Harvard players wanted more options. (“I know the players are always, ‘Hey, Coach, can we tweak this? Can we do that?’” Murphy says. The new additions mean Harvard goes from two uniforms to a potential of six different uniforms.) Yes, he admits, the Crimson wanted Harvard to appeal to recruits who’ve grown up in a constantly evolving costume culture. (Murphy says the early reviews have been positive from both current players and potential recruits.)

But, Lukas notes with a laugh, it’s unclear that any recruits really pick schools based on the uniforms they’ll get to wear.

“The very little reporting that I’m aware of indicates that uniforms are something like seventh or eighth on the list,” he says. “They are much more interested in who the coach is, how strong the program is … uniforms are probably a tiebreaker at best.

“Even if you buy the argument, I don’t imagine anyone is basing their decision on whether to go to Harvard on the uniforms.”

It’s also unlikely that college football’s blue bloods will see Harvard on the field this fall, rush to their apparel-maker, and shout, “Give me that!”

“These are the kind of legacy schools whose fan bases would go into some sort of revolt if there were major changes,” Lukas says. “I don’t think Alabama or Penn State are worried too much about what Harvard is doing. Nor do their fan bases care.”

That may be true, but when a team with a long history, an established and honored tradition, and a recent record of on-field success5 decides it has to change its on-field presentation to appeal to new recruits,6 the potential implications aren’t so easily shrugged off.

“If you look at millennials, if you look at college football in general, we’re constantly evolving,” Murphy says. “Oregon is sort of the pinnacle of uniform adjustments, [with] lots of different uniforms. We don’t want to be Oregon, even as much as that works so well for them. I think we’ve done this in probably a more refined, traditional way. And that is we’re using our school colors, we’re just using them in a more versatile way.”

Asked if he’s heard from anyone who doesn’t like the new uniforms, Murphy laughs. “No, but I’m sure I will. As you know, no matter what, you can’t please everyone.”