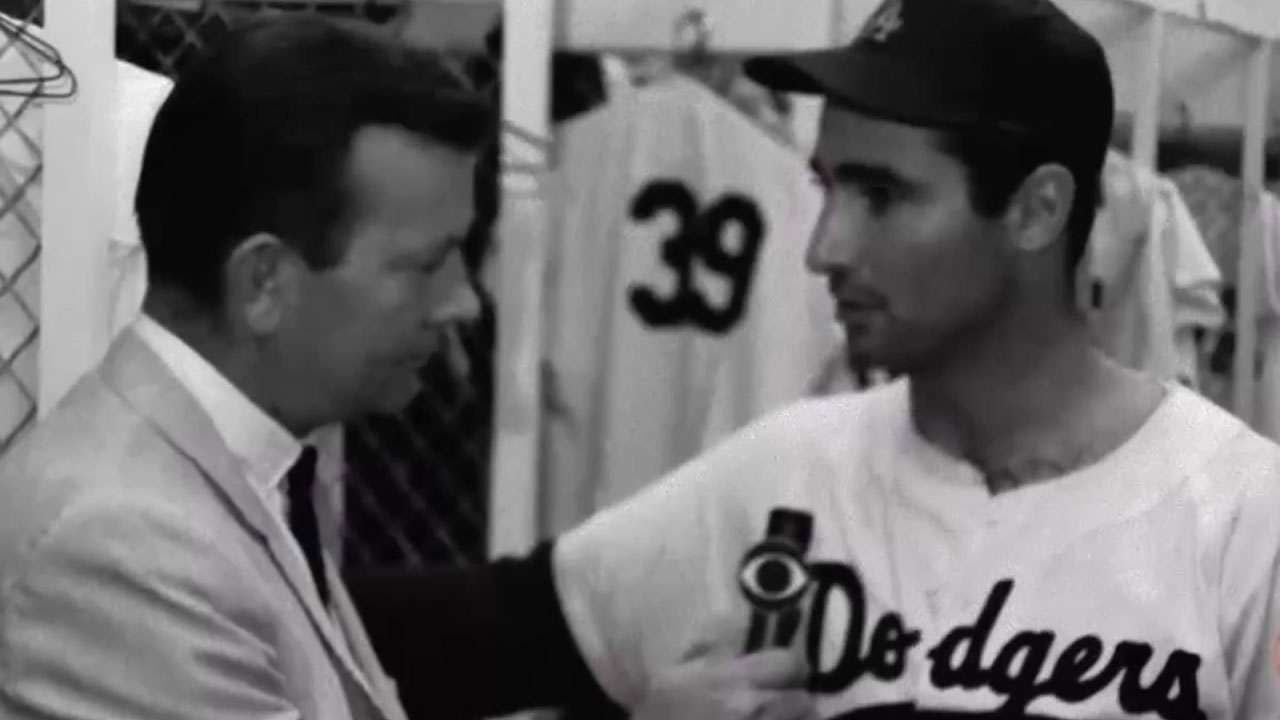 Fifty years ago today, Sandy Koufax polished off the winning side of what some say is the greatest pitching duel Major League Baseball has ever seen. On almost any other night, Bob Hendley’s line — an eight-inning complete game, three strikeouts, one hit, one walk, and zero earned runs — would’ve been more than enough to drive the visiting Chicago Cubs to a win. Koufax, though, wasn’t just better; he was perfect.

At the time, this was only the eighth perfect game in MLB history. In a previously unpublished postgame interview, here’s Koufax recounting the matchup:

As astounding as those broader numbers were, Koufax’s defining trait was the anticipation he could build in any one start. He threw a no-hitter against the Mets in ‘62, the Giants in ‘63, and the Phillies in ‘64. For most pitchers, even flirting with a no-no would be an incredible achievement. For Koufax in his prime, everything flipped: Any hitter who managed to scratch out a hit against him felt the urge to celebrate. Just listen to Koufax’s teammate, first baseman Wes Parker, talk about how the perfect game was “no big deal”:

A two-pitch pitcher throughout his career, Koufax never needed to add anything to his repertoire. He could throw his darting fastball or nasty curve, and the hitter probably wasn’t going to hit either one. Restricting your arsenal to just two pitches might make the typical pitcher vulnerable to hitters guessing what’s coming, but when Koufax was at the height of his powers, that never mattered. As Ernie Banks told Tom Verducci of Sports Illustrated in 1999:

Sandy’s curve had a lot more spin than anybody else’s. It spun like a fastball coming out of his hand. And he had the fastball of a pure strikeout pitcher — it jumped at the end. The batter would swing half a foot under it. Most of the time we knew what was coming, because he held his hands closer to his head when he threw a curveball. But it didn’t matter.

Curiously, Koufax’s pitches had grown less befuddling leading into that September 9 matchup with the Cubs. In five previous starts plus one inning of relief1 Koufax had tossed 40.2 innings, holding opponents to a .182 batting average and allowing just two homers over that stretch. But thanks to a few shaky innings and a lack of run support, he’d gone winless for two and a half weeks, which qualified as a full-on drought by his standards.

Koufax’s minor struggles, though, were nothing compared to the unrest surrounding Los Angeles and its baseball club that summer, as Dodgers historian Mark Langill notes. From August 11 through 17, the Watts rebellion raged, and fear and unrest spread throughout the city. Five days after the rebellion ended, Giants pitcher Juan Marichal had reacted to an argument with Dodgers catcher Johnny Roseboro by cracking him over the head with a bat:

Then there was Hendley. A journeyman left-hander from Macon, Georgia, he was playing for his third team when he joined the Cubs, after struggling with injuries for much of his career. In fact, he’d been called up from the minors just before the game to make a spot start. Henley would last just two more seasons after this one, finishing his career with an ERA 10 percent worse than league average. If ever there was a mismatch on paper, it was the one pitting the Dodgers’ unhittable southpaw against the unassuming Cubs lefty with a nifty knuckle curve, but not much else.

Whether it was the surge of adrenaline that came with facing the best pitcher on Earth, or sheer happenstance, Hendley was up to the task. Here’s Dodgers outfielder Al Ferrara summing up the night:

Through the first four innings of the game, neither team could manage even a single baserunner. In the bottom of the fifth, Hendley got hit by a dose of Dodgers small ball, and a twist of bad luck. Lou Johnson led off the inning with a walk, breaking up Hendley’s own run at a perfect game. Figuring that one run could be enough for Koufax, Ron Fairly quickly sacrificed Johnson to second. Then, with Jim Lefebvre at the plate, the Dodgers outfielder attempted to steal third, hoping to get himself 90 feet away with less than two outs. When Chris Krug’s throw sailed into left field, Johnson did better than that, scoring what would prove to be the only run of the game.

Johnson cemented Hendley’s hard-luck status in the bottom of the seventh. With two outs in the inning, Johnson bopped a ball just beyond Banks’ reach past first base, then steamed into second base with a bloop double. In an interview with the Georgia Sports Hall of Fame nearly 50 years later, Hendley said he felt no frustration with the baseball gods for the dying quail that Johnson hit, or any ill will toward Krug for his errant throw.

Meanwhile, Koufax carved up the Cubs lineup with the precision of a surgeon. Ask any stathead worth his salt about Koufax, and you’ll get an automatic “well, actually” disclaimer. Koufax’s peak years came during one of the friendliest periods in baseball history for pitchers, and by extension one of the worst for hitters. Pitching mounds seemed to stretch to the sky, giving pitchers a big edge. Strike zones were huge, with Koufax, Bob Gibson, and other hard throwers gunning high heat past helpless hitters forced to protect the plate. Home runs were also rare; in Dodger Stadium in particular, you needed a rocket launcher to hit the ball out. Here’s Ferrara again:

Yet, this night’s performance wasn’t a product of its era, or even the ballpark. As Koufax and others would later say, his curve was untouchable for the first six innings of the game. As the innings wore on, Koufax’s fastball gained steam, becoming as impossible to hit as an Aspirin pill.

By the time Koufax sailed through the seventh, everyone was acutely aware of what was going on, according to Parker:

They needn’t have worried. Riding that blazing fastball, with a few knee-knuckling curves mixed in, Koufax crushed everyone in sight. Facing the heart of the Cubs order, Koufax needed just 11 pitches to strike out future Hall of Famers Ron Santo and Ernie Banks, plus left fielder Byron Browne. In the ninth, Koufax struggled a bit with Krug, before finally striking him out swinging on the seventh pitch of the at-bat. He then fanned pinch hitter Joe Amalfitano on three pitches. The Cubs’ final hope was pinch-hitter Harvey Kuenn — and Koufax took him down on five pitches.

This was not only Koufax’s fourth career no-hitter — it was also the fourth one that Scully had called.2 Back in Koufax’s days, broadcasters would have to call a studio around the sixth or seventh inning of no-hit games, and tell them to be ready to record if the no-no remained intact heading into the ninth.3 Heading into the ninth, Scully would always make a point of noting the date of the game, and sometimes also the time of day and attendance. He did this, he said, to give pitchers a time capsule they could open decades later, when they wanted to tell the story to their grandchildren:

Fifty years later, there’s a debate about whether this was the best game ever thrown by two opposing pitchers. On May 2, 1917, Reds starter Fred Toney and Cubs starter Hippo Vaughn both threw nine no-hit innings; the Reds struck for two hits and one run in the top of the 10th, and Toney completed the 10-inning no-no after that. Two years ago, I argued for another game, a 16-inning (!) pitcher’s duel between Marichal and Warren Spahn on July 2, 1963, as the best-pitched game ever. Then again, the Koufax-Hendley duel remains the only game to end with just one hit, and one man left on base between two teams. In 1995, the Society for American Baseball Research voted it the best game ever pitched.

Beyond the round-number anniversaries of his greatest games, the legend of Koufax has experienced a bit of a recent resurgence because of another Dodgers lefty with the look of an all-time great. In fact, by advanced stats, you could argue that Clayton Kershaw has nearly caught, or maybe even surpassed, what Koufax did in his prime. Yet, re-watch some of these clips and you can understand why that statement would chafe old-time baseball fans. When teammates and opponents talked about Koufax, they did so with reverence. Koufax was a force of nature, his starts appointment viewing. And while his 14-strikeout piece of perfection was incredible to watch, as Parker says, you couldn’t really call it a surprise. He was that good.

His opponent that night put it best. As Hendley told reporters after the game: ”It’s no disgrace to lose to class.”

Thanks to Dan Forer for conducting interviews for this story.