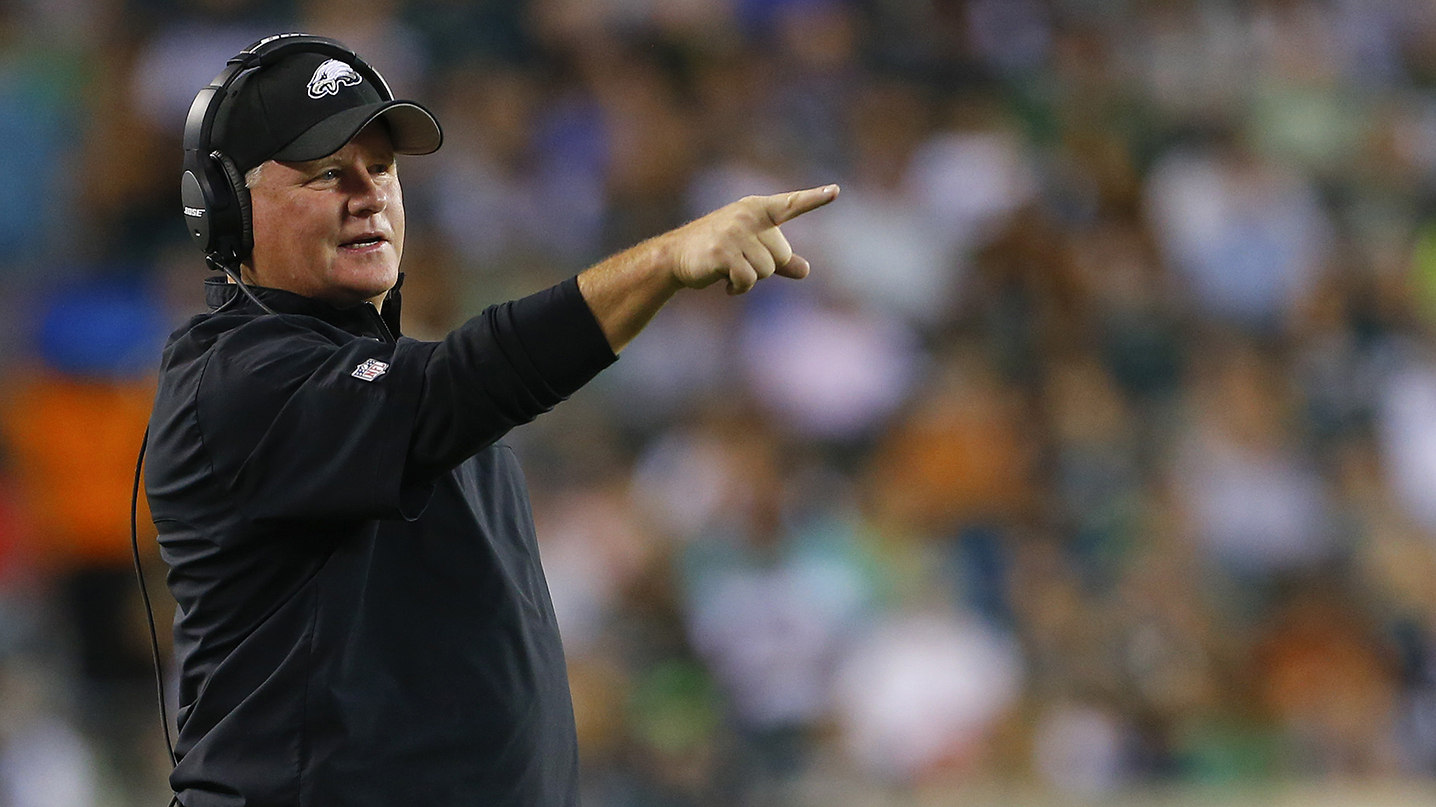 In the wake of Chip Kelly’s trade for Sam Bradford, there were plenty of efforts to figure out what Kelly saw that others hadn’t. To get Bradford from the Rams, the Eagles had to part with Nick Foles, a starter who was 14-4 under Kelly — with better career numbers than Bradford in nearly every area — and a pair of draft picks.1 At the time, it could have been construed as a lateral move for too high a price. But the way Kelly saw it, at least it was a move, and maybe just the sort Philadelphia needed if the team was going to take that final step toward becoming a true contender.

“Ten wins … has it been fun that we took over a 4-12 team that has won 20 games in the past two years?” Kelly said in an interview with CSN’s Derrick Gunn. “We went from 4-12 to 20-12, but we still haven’t won a playoff game and we understand that. We’ve got to get better and we’re always going to strive … the one thing I can promise is that we’re not going to just sit there and hopefully in a couple of years we’re going to build this thing.”

It's almost here. For everything you need to know about the new season, follow all of Grantland's coverage.
Kelly’s approach this offseason — wheeling and dealing like few personnel people ever have — has looked insane at times. Plenty of coaches with 20 wins in two years would feel comfortable moving forward with a familiar quantity at quarterback. But the thinking behind the move for Bradford was a bold and commendable one — it seems that Kelly was projecting that both Bradford and his offense could be better than anyone imagined. It’s still (extremely) early, but the factors that could have led an optimistic person to feel good about how Bradford might translate to Kelly’s style have been on display all preseason. The inhuman accuracy from his first two college seasons — when he completed a combined 68.5 percent of his passes — has been there in both of his preseason starts. Bradford’s 10-for-10 line on Saturday was impressive, but seeing him perfectly locate throws to receivers in reasonably tight coverage was even more encouraging. If his ball placement is on, the simple decisions and quick tempo in Kelly’s offense could help turn Bradford into the point guard/distributor he was allowed to be in Norman; it’s his best chance to become what St. Louis envisioned when it selected him with the no. 1 pick five years ago.

Bradford is still a long way from proving he’s the player we’ve seen for 15 throws and not the one we saw in 49 starts with the Rams. But if he can stay healthy, his 2015 season has a chance to be the test case for two quarterback theories that other decision-makers are sure to consider moving forward. The state of quarterback play in the NFL has led to a lot of speculation about why a country of 321 million people can’t produce 32 competent starting quarterbacks. The proliferation of spread offenses has gotten much of the blame, but maybe the lack of success has as much to do with a shortage of suitable environments as it does with a dearth of talent.

The most obvious upgrade for Bradford is the coaching staff. Eagles offensive coordinator Pat Shurmur held the same position with the Rams during Bradford’s rookie season, but we have two notes there. First, Bradford was OK as a rookie! Six yards per attempt and a completion percentage of 60 are on the low end of competency, but that’s where most quarterbacks are hanging out as rookies. Second, we can call Shurmur whatever we want. This is Kelly’s offense, and it’s hard to imagine a more significant creativity gap than the one between Kelly and Brian Schottenheimer.

But Kelly’s reputation as a mad scientist isn’t what matters here. Go read anything Chris Brown has ever written about Kelly. It’s not that any individual part of what Kelly’s doing is revolutionary; it’s that when it all comes together, it combines to make the jobs of his players easier. So far, that’s what we’ve seen with Bradford, and it makes it tough to not wonder how other quarterbacks might have fared if given a second chance at life in the league. If Matt Leinart had played for Kelly — and Leinart’s knack for quick decision-making and ball placement had been considered more important than the big arm Ken Whisenhunt has always seemed to crave — could it all have been different? Going the other way, it’s possible to imagine that if Robert Griffin III hadn’t landed with a coordinator willing to completely tailor his offense to Griffin’s skills, he never would have been rookie of the year, and we wouldn’t be having this conversation. If Tom Brady had been asked to play the same role in the Patriots’ scheme in 2001 that he was in 2007, there’s a reasonable chance he never would’ve become the player we know now. This is the Sliding Doors principle of NFL quarterbacks.

Coaching quality and scheme are part of it, but it’s also fair to say Bradford will have more talent around him in Philadelphia than he ever had in St. Louis. Playing quarterback in the NFL — and for any quarterback drafted in the first round, likely playing as a rookie — is difficult enough, let alone having to play it without much help. It’s an incredibly steep learning curve, and providing hospitable conditions to figure this stuff out is a fragile process. David Carr — sacked a record 76 times as a rookie in 2002 — will always be the most famous example, but looking at this list of players dumped most in a single season during their first three years, you can see it’s a group filled with highly drafted disappointments. Tim Couch, Ken O’Brien, Tony Eason, and Jeff George may never have been high-quality NFL starters, but getting turned into a pile of bones before reaching quarterbacking maturity certainly didn’t help.

An epidemic of drops can have a similar, albeit less damning effect. But no matter the ailment, it isn’t difficult to trace why so many pedigreed quarterbacks fail. Most starting quarterbacks are first-round picks, and plenty of them are taken near the top of the draft. In the past 15 years, 19 of the 75 players picked in the top five are quarterbacks. That’s four more than at any other position, and it’s worth noting that historically, it’s recommended that a team play with two tackles. The commonality between teams that finish in the top five of the draft is that often they aren’t very good. That leads to young quarterbacks — highly drafted Heisman winners and physical marvels often billed as franchise saviors — walking into rough situations they’re expected to weather from day one. You can see how we got in this rut.

That brings us back to Bradford, and, by extension, back to Kelly. “If you want to play with the odds as we want to play, it’s got to be with a quarterback situation and then the only way you’re going to get a quarterback is you got to be really not very good so you finish in the top 1-2 in the draft,” Kelly told Gunn. “If we’re not very good and we finish with the top 1-2 in the draft, I don’t think I’m going to be here, so we better find another way to find a quarterback. And that’s what we did with Sam.”

There are more blueprints for long-term NFL success than there are in the NBA, but in broad terms, Kelly’s right. Quarterback so far outweighs the rest of the positions that finding a quality one is still the most important move a franchise can make, and when playing the numbers, more of those quarterbacks are found near the top of the draft than anywhere else.

Ideally, Kelly’s plan with Bradford was to break the cycle altogether, to steal a quarterback who was actually worthy of going no. 1 overall but hadn’t shown it because he’d never been given the chance. Looking at the NFL’s traditional draft value chart, the projected picks and Foles (the 88th pick) come out to about 600 points — equivalent to a late first-round pick. The deal essentially allowed Kelly to take a player of Bradford’s pedigree with the 28th pick, something he never would have been able to do five years ago.

Even after what Bradford and the Eagles offense have done this preseason, the future is unknown. The preseason is meaningless, Bradford’s injury history is undeniable, and there’s a chance that when the speed and complexity pick up next week, the same bouts of inaccuracy that plagued him in St. Louis return. But if that doesn’t happen, if Bradford plays a full season and at least some of what we’ve seen in August carries over, there’s also a chance Bradford becomes a new benchmark in quarterback acquisition and evaluation. NFL coaches already have a tendency to believe they can finally be the one to unearth the massive potential of early-drafted busts. And if Chip Kelly provides a fresh example, that certainly isn’t going to change.