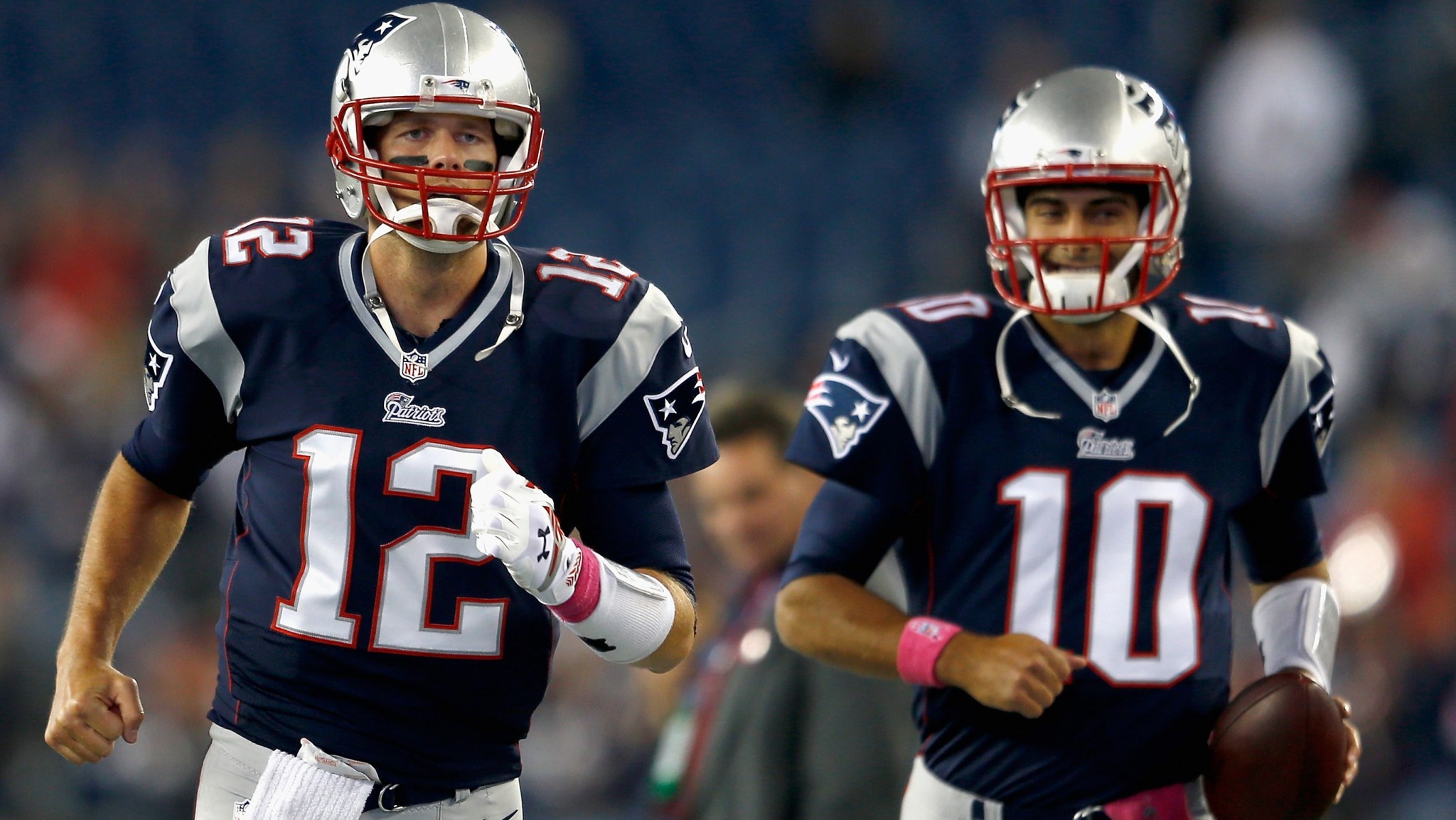 When the NFL confirmed Tuesday that Roger Goodell was upholding Tom Brady’s four-game suspension and denying the Patriots quarterback’s appeal, it sparked all kinds of follow-up stories. Brady and his counsel, Jeffrey Kessler, took the next step of authorizing the NFLPA to take a further appeal to federal court. That would be a procedural appeal as opposed to a review of Brady’s guilt or innocence. There were rumors that the NFL had offered to reduce the suspension to one or two games if he admitted his guilt in the matter, and that Brady’s camp had declined the offer.1 And then there is the ever-fascinating story of the NFL’s newest smoking gun, the cell phone that Brady conveniently decided to destroy at the exact moment when the league would have been interested in the information contained therein.2

It's almost here. For everything you need to know about the new season, follow all of Grantland's coverage.
I haven’t written much about Deflategate here because, truthfully, the whole thing seems downright farcical. The hysteria never matched up with the evidence, going back to the AFC Championship Game, when the Colts were mauled on the ground for the third consecutive time against the Patriots. Since then, various theories have sprouted up as to how and why the Patriots were cheating, only to be replaced by more salacious or plausible alternatives. The initial story in all of this, of course, was that deflating footballs had to be some Bill Belichick master plan, only for the Wells Report to suggest that Belichick was essentially an innocent party. Narratives have been wrung for truth. Data has been tortured. And now, for reasons unknown and possibly totally unrelated to Deflategate, phones have been spiked.3

I don’t doubt for a moment that Brady knew what was going on with the footballs. Goodell’s report suggests that Brady made public comments expressing his preference for deflated footballs, if not necessarily illegally deflated footballs. I find it very difficult to believe that Brady coincidentally started regularly contacting assistant equipment manager John Jastremski immediately after the AFC Championship Game after barely doing so all season and that anything in those conversations that might have been construed as related to deflating footballs was actually about selling game tickets or breaking in footballs with a new leather treatment.

At the same time, I don’t think any of this really matters. Other quarterbacks past and present, from Boomer Esiason to Rich Gannon, have repeatedly suggested that there’s no real impact on performance and that teams and passers around the league have been manipulating footballs for years. Aaron Rodgers prefers his footballs overinflated. I don’t believe that Rodgers has sat in the bathroom with Packers equipment men inflating footballs past their legal PSI and cackling evilly as he twirled his mustache.

If you start with the premise that Brady did something that was against the rules, I think you can prove that. If you start with the premise that Brady was doing something that allowed him to gain an unfair advantage versus the rest of the league, I’m far more skeptical. Talk to people around the NFL and you’ll hear a general trend surrounding the Patriots. The NFL is a paranoid league, and everybody always inevitably thinks that Belichick and his team are up to something. Belichick’s rule proposals are eyed warily, not because they’re dumb, but because some teams are afraid that Belichick will pass a proposal specifically to exploit an advantage that other organizations aren’t aware of. Very few people I’ve spoken to, though, actually think the Patriots have gained any sort of competitive advantage from Deflategate.

With all of that said, there is a story that interests me: How much are the Patriots actually going to suffer with Brady out of the lineup? Now that we’ve confirmed he will be suspended for the first four games of the season,4 we have the tools to estimate how his absence will affect the defending Super Bowl champions.

The good news, if you’re a Patriots fan, is that they start the year off with a relatively soft slate of pass defenses. While they do travel to Buffalo, which led the league in pass defense DVOA last season, they also get three games against average-or-worse pass defenses: the Jaguars (17th), Cowboys (22nd), and their opener against the Steelers (30th). All in all, it could be worse: If he were suspended later in the season, Brady could have been out for a stretch against three top-six pass defenses (the Bills, Broncos, and Texans). If Brady is going to be out, September isn’t the worst time for it to happen.

How much will it hurt the Patriots to go from Brady to untested 2014 second-rounder Jimmy Garoppolo? Obviously, it’s close to impossible to say, given that Garoppolo’s professional career consists of 27 passes in semicompetitive situations, including garbage time against the Chiefs and Bears and a half throwing to Patriots backups against the Bills in Week 17. There’s not enough data there to project how Garoppolo will perform.

We could compare how the Patriots performed in 2008, when Brady went down with a torn ACL in the first half of Week 1 and turned things over to an unproven Matt Cassel, to what they did in 2007. That also seems unfair, given that the baseline performance is one of the greatest offenses in NFL history and one that would have likely regressed in 2008, even if Brady had stayed healthy. But if you want to use that method, the Cassel-led Patriots scored 410 points after Brady’s group scored 589 in 2007. That’s a 30 percent drop. The Pats were fourth in the league with 468 points last year; cut 30 percent off the top and you get 328 points, which would make them the NFL’s 19th-highest-scoring offense.

There is a more impartial way to estimate the drop-off in performance: the betting market. Odds on the first 16 weeks of the NFL season were posted by the oddsmakers at CG Technology back in April, weeks before the Brady suspension was announced. At that time, the Patriots were 6.5-point favorites to beat the Steelers in Week 1. The line fell to -3.5 and even to -3.0 with extra juice over the last two months, but on Tuesday night, once the game was placed back on the board at the various CG books, the Patriots were now just 1.5-point favorites.

What does that mean in terms of their chances of winning the game? We can estimate that by using Pro-Football-Reference.com’s Game Finder to find winning percentages for different spread situations. Since 2000, teams that were 6.5-point favorites at home, as the Patriots were when the game hit the books, have gone 88-46. They’ve won 65.7 percent of the time.

When they are 1.5-point favorites? They’re not quite as effective; in fact, they’ve gone 39-40, for a winning percentage of 49.3. If you believe that the betting market is an effective measure of the difference between Brady and Garoppolo, the loss of New England’s star quarterback will cause the team to lose 16.4 percentage points more frequently.

Line movements for the other three games on their schedule without Brady aren’t publicly available, at least to my knowledge. What we can do instead is take the initial lines, apply the same five-point swing, and see how that affects New England’s expected winning percentage. Add that up over the four games and we’ll get a vague estimate of how much it’ll hurt to go from Brady to Garoppolo.

This is far from perfect. There’s no guarantee the lines will move by five points for each matchup in which the Patriots are replacing Brady with Garoppolo, and some of these figures are a little bit wonky — it’s a meaningless quirk of a 40-game sample that teams have been slightly better in pick’em games on the road than they have been as one-point favorites. But the general concept is close enough that we’re going to end up with a useful estimate.

Given that the Patriots were already beginning their season with a pair of tough road games against the Bills and Cowboys, the implied winning percentages from the Vegas lines suggested that the Pats were going to win 2.4 of their four games, even with Brady around. After swapping in Garoppolo and moving the lines accordingly, they’re more likely to stay under two wins, with a difference amounting to just over one-half of a win.

If partial wins aren’t your thing, let’s put the change in context by running a simple Monte Carlo simulation. I ran 1,000 simulations of the Patriots’ first four games, first with their win expectancies based on the Vegas lines with Brady, and then with the win expectancies based on the five-point swing with Garoppolo. Here’s how frequently they came away from their first four games with each given record:

For whatever estimates we can come up with, the numbers aren’t going to be a true reflection of Garoppolo until he actually gets onto the field for meaningful action. It’s unfair to expect him to be as successful of an understudy as Brady was for Drew Bledsoe, but the Patriots have enough talent on offense and enough time to prepare Garoppolo to give the young passer a fighting chance.

If this were the result of a midseason injury to Brady that handed Garoppolo the keys to an offense that could theoretically already be missing key players like Rob Gronkowski, there would be serious problems. That’s not the case here. The Patriots will miss Brady, but they should still be good enough with his replacement to stay in the AFC East hunt. And given that the Patriots started 2-2 last year before winning 13 of their next 15 games en route to a Super Bowl victory, staying in the hunt should be good enough.