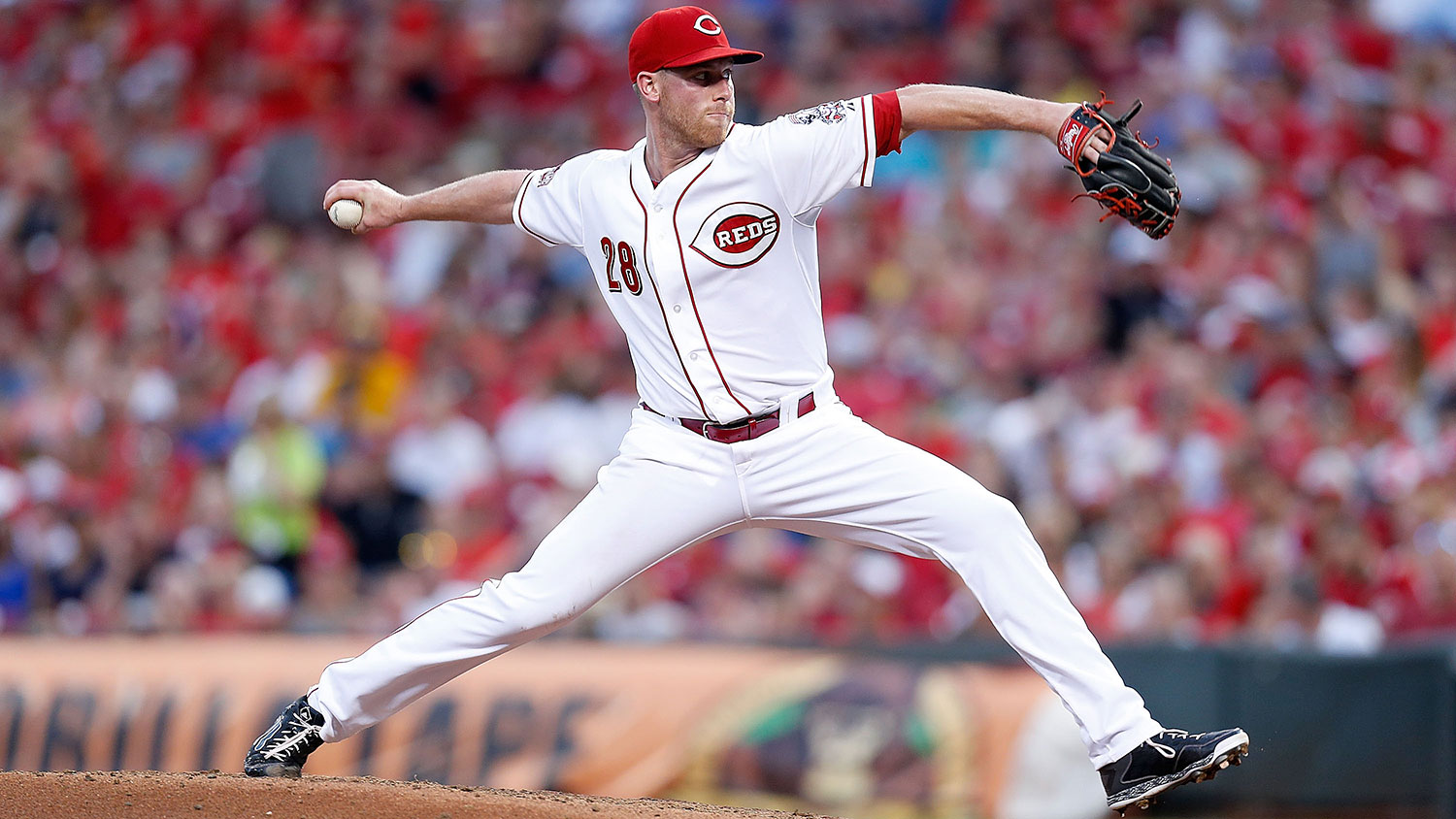 As you’ve probably already heard, this season has given us one of the best rookie classes of all time.1 Players like Kris Bryant and Carlos Correa have pushed their teams toward the playoffs, and, since early in the season, they’ve been among the best in the league at their respective positions. The Cincinnati Reds have added to the deluge of first-year players, but the results haven’t come close to what the Cubs and Astros have experienced. Yet right now isn’t what matters: Cincy is making history with both eyes on the future.

After last night, the Reds have now used a rookie starting pitcher in a record 59 straight games — and they’re likely to finish out the season with all rookie starters, which will bring the streak to 64 come year’s end.2 Cincinnati has gone 19-40 in that span, but that record is beside the point. Thanks to injuries, trades, and a bit of a “screw it” mentality, the Reds have kept rolling with the rooks. The goal is simple: try to expedite the rebuilding process by giving young starting pitchers big league innings they might never find on other teams.

At the end of last season, no one could have seen this coming. The rotation was led by Johnny Cueto, who would’ve been a perennial Cy Young contender in a world without Clayton Kershaw. Veteran right-handers Mat Latos and Mike Leake were in the mix, and so was Homer Bailey, entering Year 2 of a six-year, $105 million contract. One by one, those dominoes started falling. In December, the Reds dealt Latos to Miami for two prospects. Bailey hit the disabled list in late April with an elbow injury, then went on to have Tommy John surgery. A rough first half erased any hope of a playoff run, prompting the Reds to trade Cueto to the Royals for three pitching prospects on July 26. Leake made his final start as a Red on July 28, then was dealt to the Giants two days later.

Necessity became the mother of invention — and of opportunity. Rookie Anthony DeSclafani, one of the players acquired in the Latos trade, started the game after Leake’s last, and a rookie starter has taken the mound in every one since. 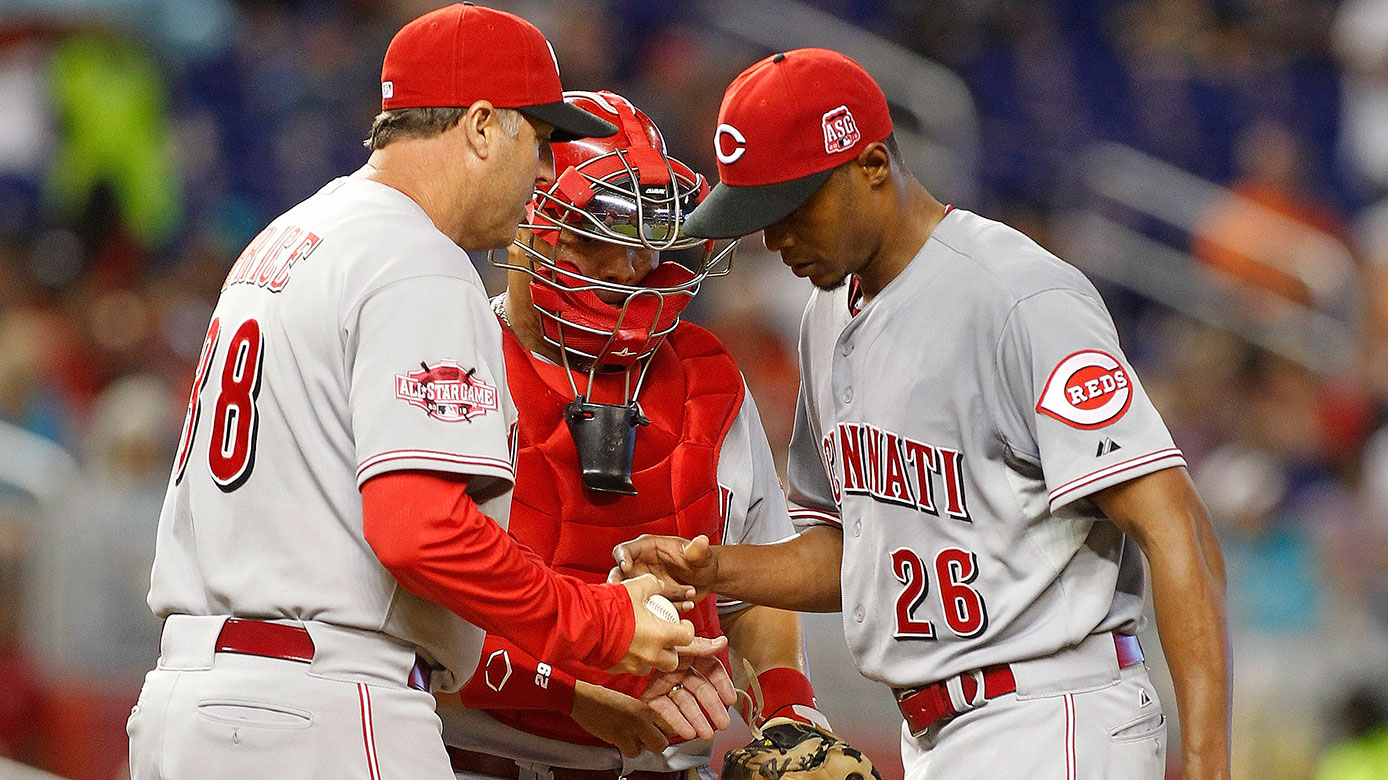 Typically, when contending teams want to evaluate their young pitchers, they’re forced to watch from afar as those kids matriculate in the minors. Noncontenders will often call up a handful of prospects to give those youngsters their first taste of the big leagues. By going with all rookies in the rotation, the Reds get to evaluate a whole bunch at once, not only gauging their major league readiness, but also assessing whether those young guys are better suited for starting every fifth day or pitching out of the pen. Projecting whether a young pitcher is ready to face big league hitters three times through the order is one thing; actually seeing him try to do it is quite another.

“When we went into this, we didn’t think about breaking any records,” Reds general manager Walt Jocketty said. “We’re just trying to finish off the season with our young starting pitchers of the future. [Going with all rookie starters] gives us a better idea of who those pitchers might be now, [compared to] what we had a couple years ago.”

Of the 59 straight games started by Reds rookies, DeSclafani and Keyvius Sampson lead with 11 starts each. Raisel Iglesias and John Lamb have started nine each, Michael Lorenzen seven, David Holmberg six, and Brandon Finnegan and Josh Smith three each. On the year, Cincinnati has also set a franchise record with a total of 105 starts by rookie pitchers.3 And during the three-game series at Milwaukee from September 18 through 20, each team started three rookie pitchers, the first time that’s happened since 1913, when the Washington Senators and Boston Red Sox waged a three-game, all-rookie-starter battle.4

Before taking over as Reds manager after the 2013 season, Bryan Price was a major league pitching coach for more than 12 years. While the immediate results of the Reds’ rookie experiment haven’t been great, Price’s experience aligns with what he’s been assigned to oversee.5

• DeSclafani (2015 numbers: 179.2 IP, 18.8 K%, 7.0 BB%, 0.8 HR/9 IP, 3.91 ERA, 3.68 FIP) has been the workhorse of the group, which qualifies as a surprise. A sixth-round pick by the Blue Jays in 2011, Toronto flipped him to the Marlins in the 2012 megadeal that sent Jose Reyes, Mark Buehrle, Josh Johnson, and others north of the border. The Marlins weren’t sold on DeSclafani as an innings-eater who could make 32 starts a season, and some in the Reds organization wondered if he might be better suited to high-leverage relief work setting up the great Aroldis Chapman. So far, he’s proved the skeptics wrong. “He’s established himself as a credible major league starting pitcher,” Price said. “He’s durable, he’s thrown strikes, he has good stuff, and he’s improved his curve and changeup.”6

• The Reds signed the Cuban right-hander Iglesias (95.1 IP, 26.3 K%, 7.1 BB%, 1.0 HR/9 IP, 4.15 ERA, 3.56 FIP) to a seven-year, $27 million deal in June 2014. Iglesias was a prospect who fired fastballs that touched the mid-90s, which he matched with intriguing secondary stuff and a wide array of arm angles that could confuse hitters. “When he initially came up, left-handed hitters were giving him a lot of trouble,” Price said. “He changed how he was attacking lefties, and that created an immediate turnaround. He started getting the fastball in on them, and used the change to go with that.” Against right-handed hitters, Iglesias throws a big, sweeping slider that Price compared to Bronson Arroyo’s. Because of his lack of innings thrown earlier in his career, the Reds shut Iglesias down for the season after his September 13 start, but Price said he thinks Iglesias “can be a middle-to-upper-echelon starting pitcher.”

Cincinnati nabbed Lamb, Finnegan, and 22-year-old left-hander Cody Reed in the trade for Cueto — and that’s looking like it might be a massive haul in exchange for just a two-month rental.7

• Lamb (45 IP, 26.3 K%, 8.1 BB%, 1.4 HR/9 IP, 5.40 ERA, 4.05 FIP) was once viewed as an elite prospect, making the top 20 on both the Baseball America and Baseball Prospectus lists in 2011. However, he underwent Tommy John surgery that June, which quickly scuttled the hype. This year, he returned to top form, striking out a batter an inning and posting a 2.67 ERA at Triple-A Omaha before the Reds acquired him. “I think he’s going to be terrific,” Price said. “He’s shown glimpses of that here. He only had one game where he struggled with command, against the Cardinals at home.8 Then he comes back and throws six scoreless, beautiful innings in St. Louis. He’s a classic left-hander: He has inner confidence, controls the running game, fields his position well, has a really good changeup. [He’s] really bright … but also kind of goofy, in a good way.”

• In 2014, Finnegan became the first pitcher ever to pitch in both the College World Series and Major League Baseball’s World Series in the same year. Still, the hard-throwing lefty grew disenchanted with the Royals: He wanted to start in the majors, but K.C. would only let him do that in the minors and had him pitching in relief with the big club. “The Royals kind of screwed me over this year,” Finnegan said earlier this month. After acquiring him at this year’s deadline, the Reds had Finnegan pitch out of the pen for his first two outings, then shifted him to the rotation. His results this season both with the Reds and Royals haven’t been great (42 IP, 22.4 K%, 10.9 BB%, 1.7 HR/9 IP, 3.86 ERA, 5.19 FIP), but he has started only three games. As an also-ran, the Reds have the luxury of giving him more time in the rotation. “On our end, we’d like to see if young kids can start first,” said Price, who praised Finnegan’s fastball-slider-changeup repertoire and his ability to keep the ball down. “We have a strong feeling he’s capable of it.” If not, the plan is to move him back to the bullpen.

Price checked off several other young pitchers either already pitching for the Reds’ major league team or potentially on their way to doing so. Lorenzen fits the Finnegan mold as a flame-throwing reliever now being auditioned in the rotation. Sampson, Holmberg, Smith, and Jon Moscot have taken their lumps in brief auditions as major league starters this year, but again, the hope is that they could all emerge as decent bullpen pieces if they can’t hack it in the rotation. Meanwhile, the Reds have built up their storehouse of minor league pitching talent, too. Amir Garrett was recently named co–Pitcher of the Year in the Florida State League. Robert Stephenson was rated a top-25 prospect by Baseball America, Baseball Prospectus, and MLB.com this year. And Reed is a 6-foot-5, 220-pound intimidator who’s fanned 60 batters in 49.2 innings (with a 2.17 ERA) at Double-A Pensacola. 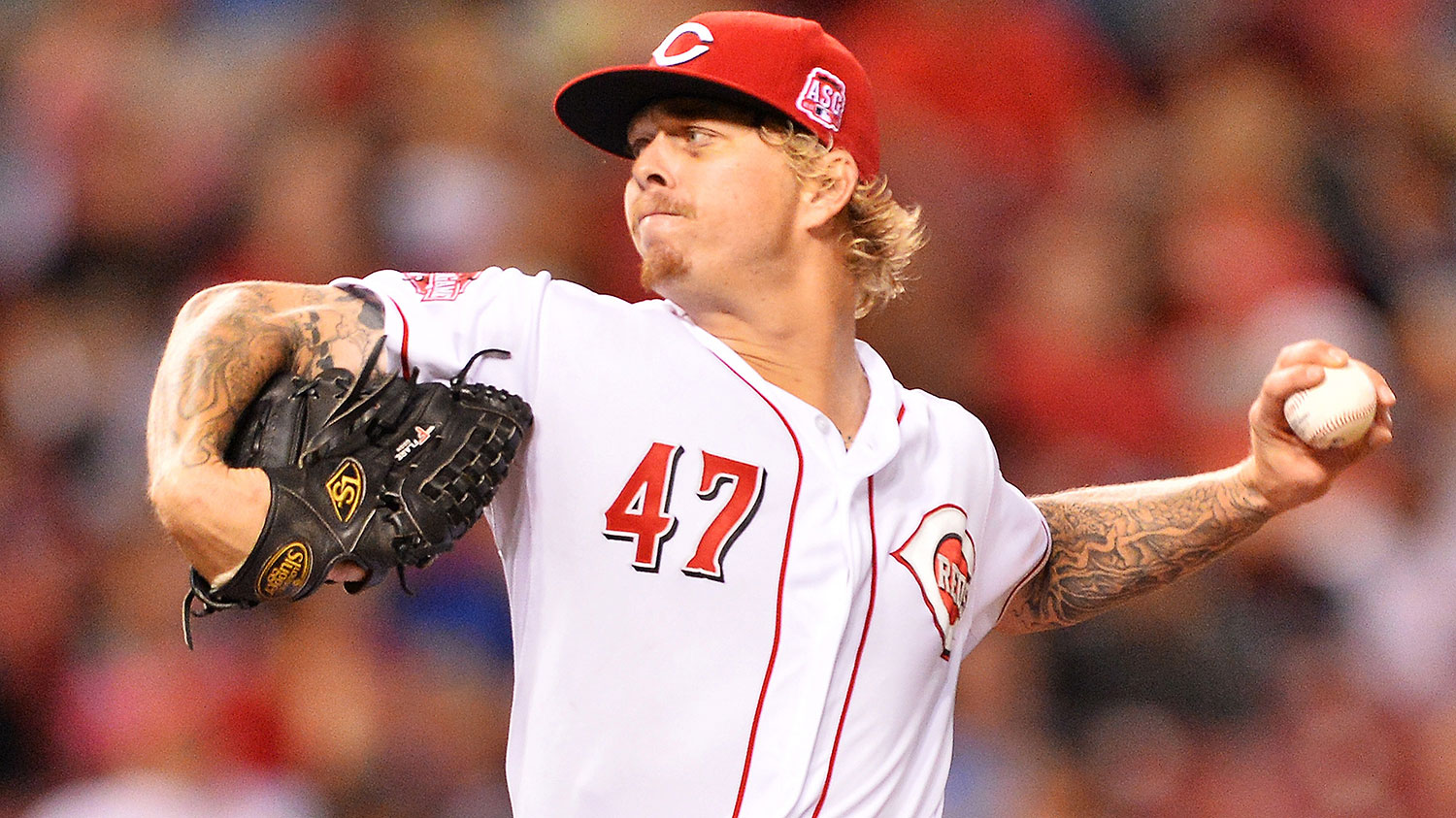 The goal with all of this pitcher stockpiling is to eventually build a young rotation that resembles the one fielded in 2010, when the Reds won their first division title in 15 years, thanks in part to precocious contributions by Cueto (then 24), Bailey (24), Travis Wood (23), and Leake (22). Price and Jocketty acknowledge that some of the rookies thrown into the fire this year probably won’t play major roles in a potential Reds revival. And Jocketty said Cincinnati might add a veteran pitcher or two this winter to stabilize the rotation and take some pressure off a bullpen forced to work hard as the Reds try to avoid overworking their young starters.

In the meantime, these last few days of the season — like the two months leading up to them — won’t likely lead to many wins. Price and Jocketty acknowledged that all of this losing has weighed on them, in addition to the veteran players who’ve had to endure all of those losses while the rookie pitchers learn on the job. As much as teams talk about rebuilding with homegrown players, most clubs try to leaven that process with more proven talent. The Reds do have vets like Jay Bruce, Todd Frazier, Brandon Phillips, and the great Joey Votto to help in that regard on the hitting side, just not on the pitching side.

Meanwhile, losing this aggressively risks alienating fans: The Reds don’t have to go back very far to remember what the then-bottom-of-the-barrel Astros had to endure when it came to plummeting attendance and 0.0 TV ratings. When you see a star like Cole Hamels block a trade to Houston and opt to go to a division rival instead, it’s hard not to wonder if over-the-top levels of losing might sometimes leave a lasting stink on a franchise, even once that team starts to win again.9 Of course, the Reds are also on pace to claim the no. 3 pick in next summer’s draft, something they probably wouldn’t have had if they’d tried to patch their rotation with more established pitchers rather than go to full “throw spaghetti against the wall and see what sticks” mode.

Plus, if you’re going to lose, you might as well do so with a plan. We’ll have to wait a few years before we can determine whether this one works, but as the defeats have piled up in Cincinnati, so have the reams of pitching data that other teams would normally need years to collect.