Fair Is Foul, But Fouling’s Unfair 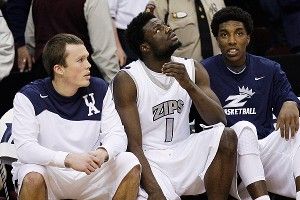 Something disappointing and inevitable occurred at the conclusion of Saturday’s Mid-American Conference title game. Akron trailed Ohio 64-61 with 6.2 seconds on the clock, 94 feet from the basket. Recognizing the situation, Ohio coach John Groce made what proved to be the right decision: The Bobcats intentionally fouled a Zip with 3.1 seconds remaining, forcing Alex Abreu to make the front end and then miss the second on purpose (which, to his chagrin, bounced in anyway). Ohio won by a point and advanced to the NCAA tournament, which it deserved. But this is a bad way for a basketball game to end. The very idea of a team with the lead intentionally fouling sometimes makes “winning sense,” but it’s vaguely unsporting and antithetical to how the game is played 99.9 percent of the time. It abuses a technicality.

Statistically, we still don’t know if fouling is better than letting an opponent attempt a desperation trey. Harvard’s John Ezekowitz analyzed the problem in 2010 and came to this lukewarm conclusion:

In other words, it’s two versions of an equally safe gamble. Considering the specific circumstance Ohio faced on Saturday, fouling probably did make more sense (since 6.2 seconds is just enough time to manufacture a difficult-but-makeable 30-footer). Florida State faced a similar scenario in Sunday’s ACC tournament final and elected not to foul (and almost got burned). Still, I would always prefer that the trailing team receive an opportunity to tie the game by hitting a shot from the floor. It’s superior in every way: It doesn’t force anyone to awkwardly miss a free throw on purpose, it’s more dramatic than a bunch of guys trying to convert an offensive rebound, it entails more skill than chance, and it seems closer to the core principles of the game (i.e., making shots on offense and not creating contact on defense). This being the case, I think the NCAA (and perhaps the NBA) should consider a rule change for next season:

If a team trailing on the scoreboard is fouled, they have the option to (a) accept the free throws (assuming they are in the bonus), or (b) decline the penalty and take the ball out of bounds at the point of the infraction, or at midcourt (whichever location they prefer).

There’s no way this rule could be abused, since no trailing team would ever decline a free throw opportunity unless they specifically needed three points in the closing seconds. (The only other scenario would be some kind of over-the-top “Hack-a-Shaq” situation, and I wouldn’t mind seeing the elimination of that strategy, either.) The defensive team still has a huge advantage: They’re ahead by three and can’t lose unless they foul someone in the act of shooting. It seems like any rule that would increase the number of potential buzzer-beaters while decreasing the boredom of premeditated fouling could only be good. If there’s a downside to this proposal, I don’t see it.