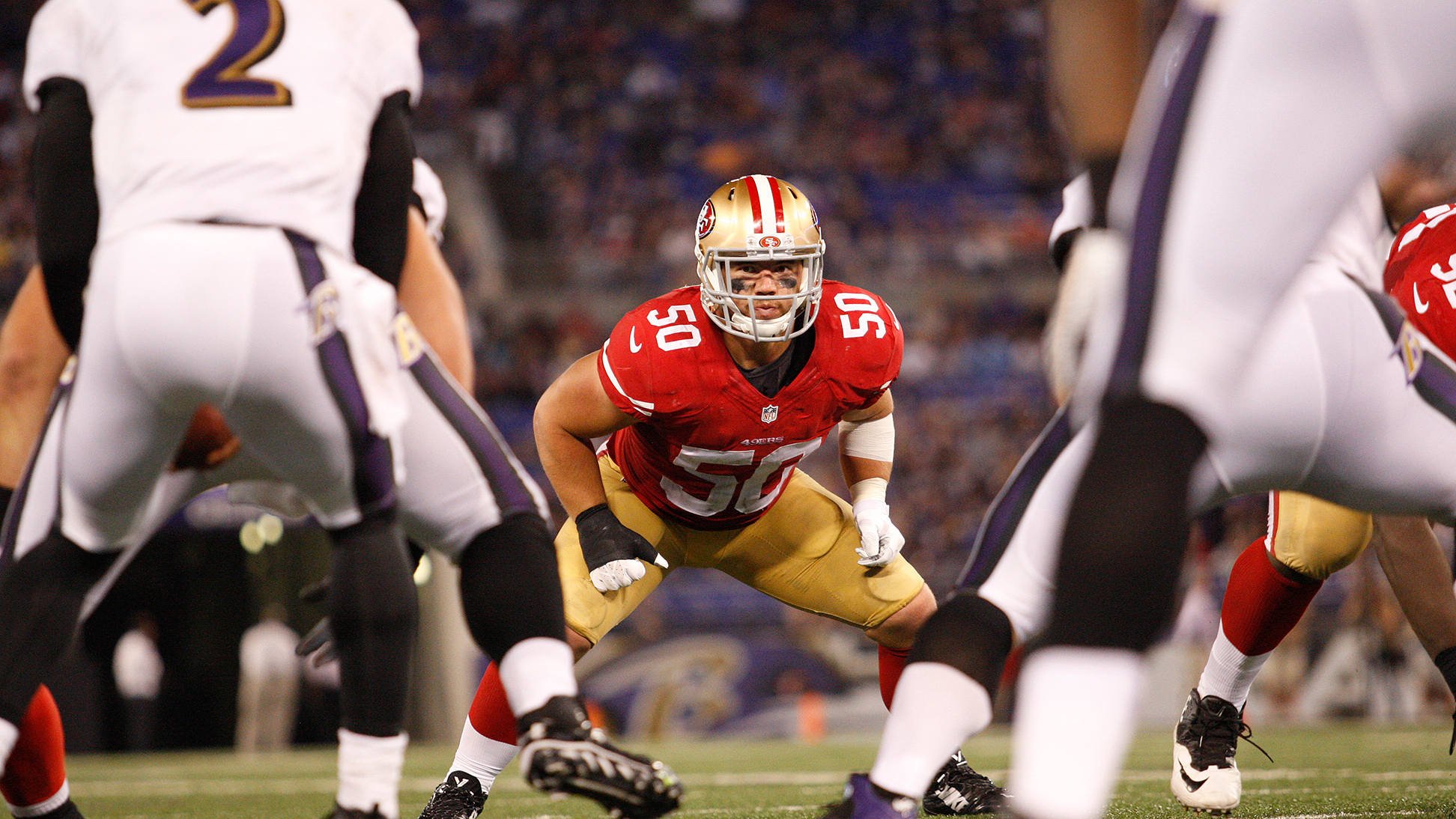 1. Every Monday, shortly after his HBO show Last Week Tonight airs, there’s a new John Oliver video to share. He takes on some monstrous hypocrite who epitomizes the worst of capitalism, inveighs against said hypocrite for 10 or 15 cathartic minutes, and the next day, like clockwork, a like-minded audience cheers across the Internet.

Websites need content, people need an excuse to abuse the word “ether” a little more, and we all get to have our indignation vindicated. The topic is almost irrelevant.

But this week it played like a parody of the whole phenomenon.

The NCAA released its bracket for the men’s basketball tournament on Sunday night, and Oliver took the opportunity to go out back and beat a dead horse a little further into the ground. He blasted the NCAA. He tore into the NCAA. He took it on, he destroyed it, and he exposed the shameful system right there in the open. John Oliver was Shirley F-​-​king Jackson and the NCAA won The Lottery this week. 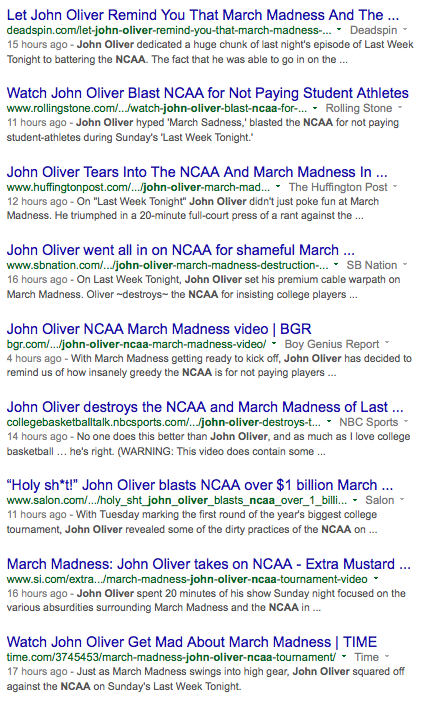 2. Monday night, 49ers linebacker Chris Borland announced that he was retiring from football. He wants to protect his health while he still has the chance.

“From what I’ve researched and what I’ve experienced,” he told ESPN’s Mark Fainaru-Wada and Steve Fainaru, “I don’t think it’s worth the risk.”

This comes on the heels of other retirements across the league over the past two weeks. Steelers linebacker Jason Worilds walked away at 27 years old. Jake Locker spent most of his career as a punch line, quarterbacking the Titans, but it was still surprising to see a former top-10 pick quit the game after just four years. And Patrick Willis, a Hall of Fame linebacker for the 49ers, was the most incredible news of all. He left the game at 30.

At the time, the 49ers didn’t seem panicked.

Trent Baalke: "We are very confident" in Chris Borland and Michael Wilhoite filling in for Patrick Willis next season.

But on the heels of the 24-year-old Borland’s retirement, the panic stretches well beyond San Francisco. This is one of the best young players in football, coming off one of the best seasons of any rookie in the league. He had the chance to fill Willis’s shoes and start at middle linebacker for a team that just two season ago was only a play away from the Super Bowl.

Back in 2014, Borland was the college linebacker at the combine who said, “I feel like I’m the toughest guy here … we’ve got a lot of tough guys here, but I’ve played through things.”

Now, after exceeding every expectation on the field, he has taken a look at his own experience and the research and mounting evidence, and has decided that the benefits of playing pro football aren’t worth the cost.

“I feel largely the same,” he told ESPN, “as sharp as I’ve ever been. For me it’s wanting to be proactive. I’m concerned that if you wait till you have symptoms, it’s too late. … There are a lot of unknowns. I can’t claim that X will happen. I just want to live a long healthy life, and I don’t want to have any neurological diseases or die younger than I would otherwise.”

This is big news. It feels like a watershed moment.

I’m just not sure it really is.

3. We’ve known the truth about football for a while now. We all knew that concussions have tragic, awful consequences for players as they get older. Mike Webster’s son had to taser his father to sleep. There are dozens of horror stories like that — enough to convince you there are many more that never make it to the news.

This is ugly, and that’s before you consider the pain that players live with or the long-term effects of the pain pills they ingest. Then you think about the behavioral changes connected to all this trauma, and maybe it helps explain how certain players turn angrier and more violent off the field. That’s a problem that deserves its own column, but for now, just read Dan Le Batard from this fall. All of it is part of pro football. We’ve known this for a while, and pro football seems to be doing just fine.

What feels different in 2015 is that active players seem to know too.

For the people paying attention, it feels good to know that players aren’t blind to everything that’s ugly about this sport. Maybe it’s even encouraging.

But it changes nothing. It would be easy to write something like, “Chris Borland is the face of the NFL’s future.” But anyone paying attention knows that probably isn’t true.

A handful of players abruptly retiring will just become one more thing we all ignore when the season starts. Maybe it will be talked about in San Francisco, but the rest of the league will move on. St. Louis just signed Nick Fairley to play alongside Chris Long, Robert Quinn, and Aaron Donald. In five months, we’ll all be talking about quarterbacks getting suplexed on every down against the Rams.

4. The TV contracts are signed, and media outlets need content. Nobody is going to walk away from the NFL. There’s too much money involved across the board. If football is on television, fans will keep watching it, in record numbers, and the networks will keep paying record fees for the right to show it.

Don’t get me wrong, I’m not above jumping in the middle of the “football is dying” take tornado. Every few months, there’s a story that makes the end seem that much closer. I’ve written so many different columns about the NFL’s downfall, it’s impossible to keep track. One year, there’s the concussion settlement. Or it’s the Junior Seau autopsy. Or maybe the Frontline documentary. Just a few months ago, it was the growing stupidity of the games themselves, and the Dez catch that will upset me until the end of time. I’ve been writing some variation of the same “NFL crisis” column for the past five years.

But you want to talk about the NFL’s ugly future? Look at the past year. A player was caught beating his fiancée on tape, a superstar was accused of child abuse, and the commissioner’s integrity was questioned by a federal judge. The FBI raided locker rooms over prescription pills. A tight end is facing murder charges in the deaths of three people. The ugly future is here.

Meanwhile, the Super Bowl just had its highest rating in history. On any given week during the season the three highest-rated shows on television belonged to some form of football. You or I may have an existential crisis when watching this sport, but football is doing fine.

5. There were two ironies in watching the Oliver video blow up the Internet on Monday. The first is that every single sports website that posted that video will now spend the rest of March capitalizing on as much March Madness content as possible. (Grantland didn’t post the video, but we’ll be no different, even though we write about the NCAA’s evils at least five times a year.) The second irony is that any serious sports fan who cares enough to spend 10 minutes watching Oliver tear down the NCAA will definitely spend this entire weekend watching the NCAA tournament.

But at least something like NCAA ethering will eventually shame that organization into reform. No amount of scathing takedowns or media triumphs will ever change the fundamental realities of football as a business.

I guess it would be disingenuous to pretend that Chris Borland will change football’s bottom line. Every year there’s a new story that’s supposed to shock the sport into reform, and it never happens. Eventually, beating a dead horse gets exhausting. But the takes will come regardless, and especially this week.

There will be treacly columns defending Borland’s decision, as if anyone with a brain is criticizing him. Then someone notable really will question him, and we’ll have to listen for two days while that person becomes the big target who gets tarred and feathered. Through it all, others will use Borland as an ominous sign for football’s future, a clear indication that football is headed in the wrong direction, destined to become as marginalized as boxing or horse racing. And the same people who love John Oliver videos will love all of that content, and share it, and tweet it … and then we’ll all be watching the NCAA tournament this weekend, just like we’ll all watch the NFL next year.

There’s a smug pessimism that infects how I and a lot of the Internet generation views everything, and none of it ever makes a difference. We watch people like Oliver and Jon Stewart eviscerate easy targets, and feel smart when we laugh about how doomed we all are. We see a few lifelong football reporters defending the NFL, and they immediately become a punch line. The older I get, the more naive this feels. Nobody is solving anything, we’re just really good at complaining about the problems. Eventually it all snowballs into this haze of cynicism that feels smart, but actually makes us all look dumb.

In the NFL’s case, maybe the antidote to this is just honesty.

Football will have a real crisis if doctors ever develop a test that can successfully diagnose CTE before symptoms arise. If 75 percent of the league tests positive for brain damage, suddenly the conversation gets a lot more complicated. At the very least, Congress continuing to approve a tax exemption would be even more reprehensible than it already is.

Until then, all of this is just noise next to $27 billion in TV contracts, and Borland’s real legacy probably won’t be what you want it to be. He’s not proof that that this sport will collapse on itself one day. In the end, he’ll probably be proof that even players themselves are replaceable. No matter who walks away, there will always be plenty more who decide the risks are worth it.

Borland can leave, he can take a stand, he can look at the problems in the NFL and decide this sport is more trouble than it’s worth. But the game will keep going just fine without him. He’ll miss football more than football will ever miss him.

His choice was really no different from the choice anyone has. All we learned Monday is that Chris Borland is stronger than the rest of us.