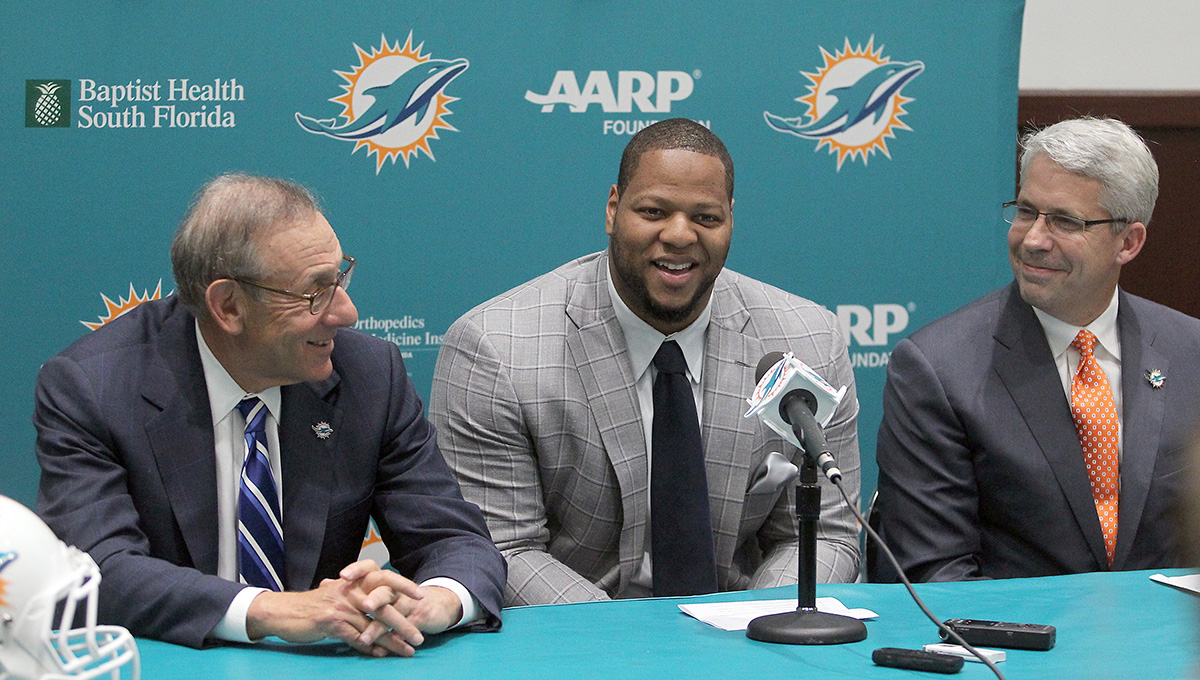 Before free agency began, the Dolphins wouldn’t have been a popular choice for this year’s offseason champions. Miami’s cap was still riddled with the sins of its last spending spree, when it gave a combined $69.5 million guaranteed to Brian Hartline, Mike Wallace, Dannell Ellerbe, and Philip Wheeler in 2013. By early March, foreseeable cost-cutting moves put all of those players on borrowed time in Miami, but with the resulting dead money and the other substantial deals still on the Dolphins’ books,1 it seemed like teams flush with cap space would be more likely to make a big splash.

Two weeks later, only the Eagles have made more headlines than the Dolphins. Miami emerged as the dark horse for Ndamukong Suh and eventually coaxed him to Florida and its welcoming lack of income tax with a massive contract that features $60 million in guarantees. After two joyless years, the Dolphins dealt Wallace to the Vikings, but only after bringing in former Saints receiver Kenny Stills for Ellerbe and a third-round pick. Miami — in ways both quiet and loud — has reshaped its roster in the hope that it can turn last year’s fringe playoff contender into a team fit for the postseason. Most of their moves should help in that pursuit, but by attacking their needs for this season, the Dolphins’ future has turned even murkier than it was before.

The Big Domino on D

The day after it became clear that Suh-to-the-Dolphins was inevitable, Bill Barnwell broke down why the deal might end up being problematic. Suh may be the most impactful non-quarterback to hit free agency in 20 years, but a single position player can do only so much for a defense. Since the details of Suh’s contract have come to light, others have expressed similar concerns. When asked about the deal by Peter King earlier this week, Jason Fitzgerald of Over the Cap noted that in the free-agency era, the average Super Bowl champion spends less than 10 percent of its cap on any given player. Accounting for a steady growth in the cap, and with the way his deal is structured, Suh will come in below that figure only three times during his six years in Miami.

Before getting further into how Suh’s deal might affect Miami’s plans, it’s worth exploring why the Dolphins wanted him in the first place. Suh would be near the top of the list for any coordinator building his defense. He’s the sort of player offenses must be aware of at all times, a dominant run defender and one of the best interior pass-rushers in the league — a truly unique combination of size, power, and instincts.

Run defense had to be the area Miami was considering when it made its push for Suh. The Dolphins finished the season 18th in run-defense DVOA, including a significant tumble in the second half of the season. They looked helpless in slowing down the Broncos, Jets, and Ravens during a three-week stretch in late November and ultimately allowed an average of 3.11 yards before contact from Week 9 through the end of the season. It was a particularly rough stretch for defensive tackle Randy Starks, whose role will be at least partially filled by Suh’s arrival. Linebacker Jelani Jenkins also had his struggles against the run late in the year, and with the money allocated to Suh and pieces for the offense in the past few weeks, Jenkins is slated to start next to Koa Misi in Week 1.

That’s the cost of signing a player like Suh — he is the biggest domino, toppling over rows of smaller pieces. His mammoth contract prevents even incremental upgrades at other positions through free agency, which means that the little pieces in the secondary may be falling fast. With Brent Grimes and Reshad Jones, Miami is set at left cornerback and free safety, respectively, but most of the other spots are still up for grabs. Slot corner/safety Jimmy Wilson, safety Louis Delmas, and the retired Cortland Finnegan are all gone from last year’s defense. The Dolphins signed Brice McCain to play in the slot after a solid year in Pittsburgh, and Will Davis and Jamar Taylor — a pair of 2013 draft picks — are likely going to fight it out for the spot opposite Grimes. There’s a chance that whoever wins that job will be better than Finnegan was in his final season, but it’s still likely that the Dolphins will need to lean on their pass rush to slow down opposing quarterbacks.

Like any defense, the Dolphins are at their best when creating pressure, but the numbers from last year are staggering. During the first half of the year, when Miami had one of the best defenses in football, the Dolphins were getting pressure on 29.4 percent of dropbacks — tied for the third-best rate in the league. During the second half of the season, that figure plummeted to 21.2 percent, the fourth-worst mark in the league. There was more than one reason for the decline. Notably, defensive end Olivier Vernon’s production tailed off down the stretch, allowing teams to more easily slide their protections Cameron Wake’s way.

In adding Suh, the hope is that everyone’s job gets a bit easier. Both Suh and Wake deserve extra attention on nearly every pass-rush snap. Eventually, offenses are going to run out of blockers. The idea of Suh and Wake lining up on the same side should be genuinely horrifying for any offense. If a team does devote the center and guard to Suh while handling Wake with a tackle and a back, that leaves nothing but one-on-one matchups for Vernon on the other side. Theoretically, adding Suh to an already formidable pass rush makes up for whatever deficiencies the Dolphins have on the back end. The team had better hope that plan comes true. Suh is a rare talent, but the sacrifices Miami made in bringing him in will put that much more pressure on him being every bit the player he was in Detroit. 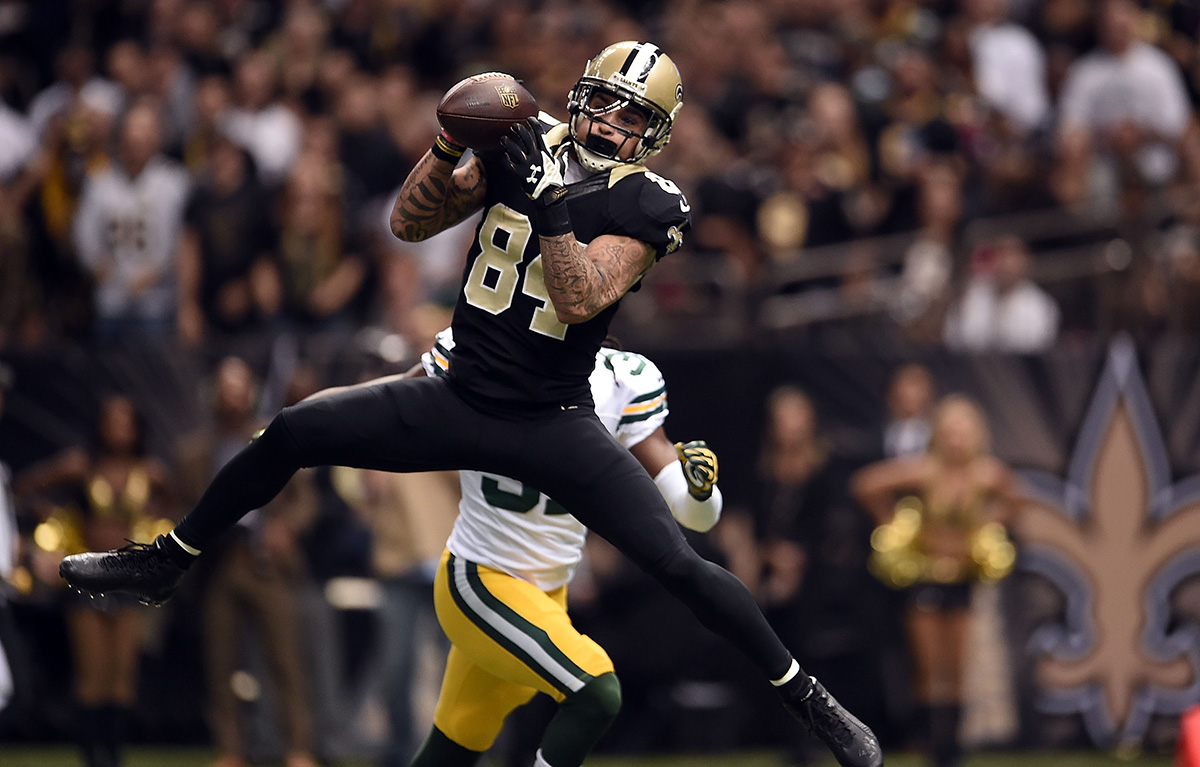 Suh and his guaranteed $60 million have predictably dominated conversations about Miami’s offseason, but most of the Dolphins’ retooling has actually come on the other side of the ball. Almost all of Miami’s receiving corps looks different than it did at the end of last season, and that’s probably not a bad thing.

The Dolphins’ trade for Kenny Stills last week accomplished two goals. First, it was a chance to dump the remaining money owed to Ellerbe, who likely would have been cut anyway. Second, Stills provides the type of threat the Dolphins haven’t had in years. Miami finished the season 31st in QBR on passes 30 or more yards down the field. The Dolphins completed three passes (on 27 attempts) that deep the entire season. During Stills’s two years in the league, no receiver has caught a higher percentage of that type of throw than he has, hauling in 63.2 percent. Compare that to Mike Wallace at 17.5 percent, good for 51st among the 57 receivers with at least 10 targets. It’s no surprise, then, that Wallace was quickly traded after the Stills deal went through.

Stills gives the Dolphins a chance to separate Ryan Tannehill’s deep-ball struggles from those of his receivers — Miami is building a passing game synchronized with what Tannehill does well. His strength is his ability to accurately place the ball on short and intermediate throws, and the Dolphins have spent the past two offseasons collecting receivers who thrive in that area of the field. Jarvis Landry has the chance to develop into an underneath nightmare out of the slot, and to go with him, Miami has put together maybe the best tight end duo in the league. 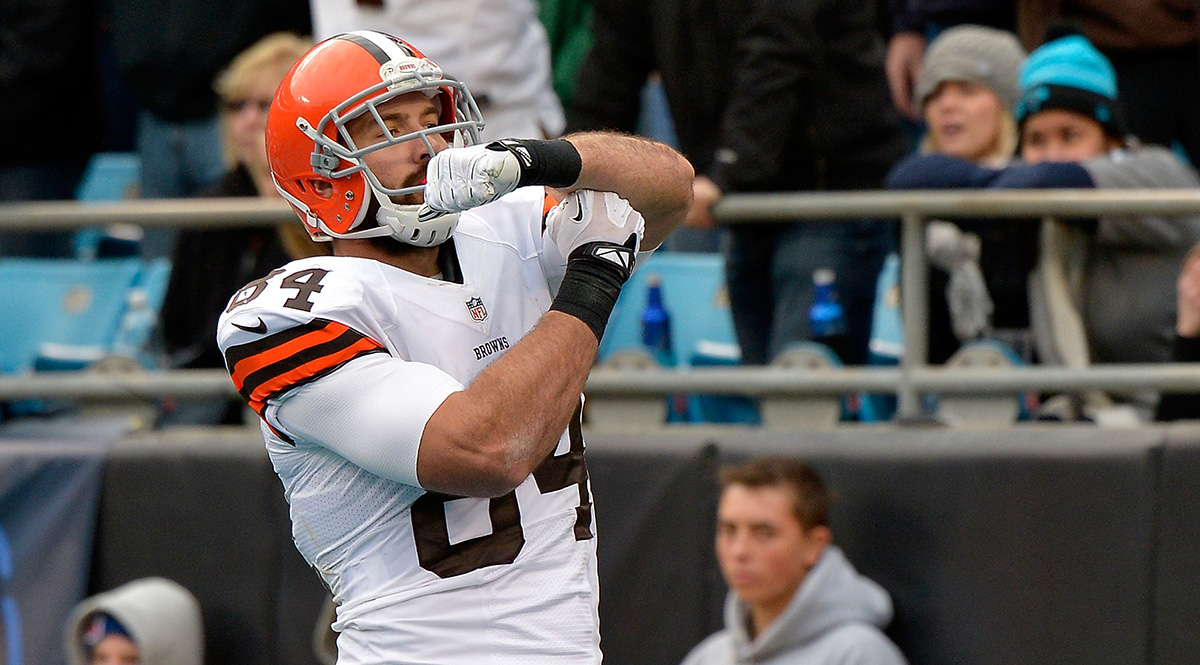 The team signed Jordan Cameron to a two-year, $15 million deal, $5 million of which is guaranteed. A big question for Cameron as he entered free agency was his health. He missed six games last year because of concussion-related symptoms, and his deal with Miami includes up to $2.5 million in bonuses that depend on his game-day availability. If Cameron2 can stay healthy, the Dolphins will have a tight end capable of lining up both inline and out wide. Along with Landry, it would make for a pair of receiving options who win in the intermediate areas of the field.

With its new receiving corps intact, the glaring hole that remains on the Miami offense is still on the interior of the line. If the Dolphins move Mike Pouncey back to center, that leaves question marks at both guard positions. Billy Turner and Dallas Thomas are recent third-round picks who could certainly mature into worthwhile starters, but there might be a more aggressive option out there. As part of their own whirlwind offseason, the Eagles are reportedly trying to trade guard Evan Mathis. Mathis, 33, is slated to make $6.5 million this season and $7 million next year. Thanks to the cost-cutting moves they’ve made elsewhere, the Dolphins would be able to absorb Mathis’s cap figure this year and give their running game a significant boost. Offensive coordinator Bill Lazor was the quarterbacks coach in Philadelphia when Mathis transformed into a force on the line, and he’s a perfect fit for the scheme that Miami runs. It would be a bold move, but no more bold than the moves for Suh or Stills or Cameron. The Dolphins have done a lot of work — and spent a lot of money — to upgrade their offense, and Mathis would be the ideal final piece. Why get shy now?

Among the reasons the Dolphins wanted to rebuild their receiving corps, beyond saving a few dollars, is that they have to do all they can to help Tannehill. Miami is facing a decision with Tannehill that it has to make by the first week in May. It’s not likely that the Dolphins will let Tannehill play out the final year of his deal, so they can either exercise the fifth-year option in his rookie contract or sign him to a long-term extension. The option would pay Tannehill about $15 million in 2016. Then factor in Suh’s deal. To get Miami under the cap this season, Suh’s cap figure is a paltry $6.1 million. That means that next season, Suh will count for $28.6 million against the cap — the highest figure in the league. The Dolphins can always restructure the deal a bit to save some money, but Suh’s cap figures in the seasons to come aren’t exactly small.

If Miami does choose to use the option on Tannehill, it means nearly $44 million of its cap would be dedicated to two players. Giving Tannehill a long-term deal would allow the Dolphins to drive his year-one figure down to help offset Suh’s huge price tag. Again, dominoes.

This is the consequence of Miami’s plan. Any team would be lucky to have Suh on its roster. But the premium the Dolphins paid for him is complicating every aspect of how they can build the rest of their roster. This is a reality of modern-day salary-cap sleight of hand. With Suh, a reshuffled deck of receivers, and perhaps even Mathis, Miami would be well positioned to make a run at the playoffs this fall, but likely not much beyond 2016. Then the hard decisions will begin all over again, and the front office will need to line up the dominoes all over again.