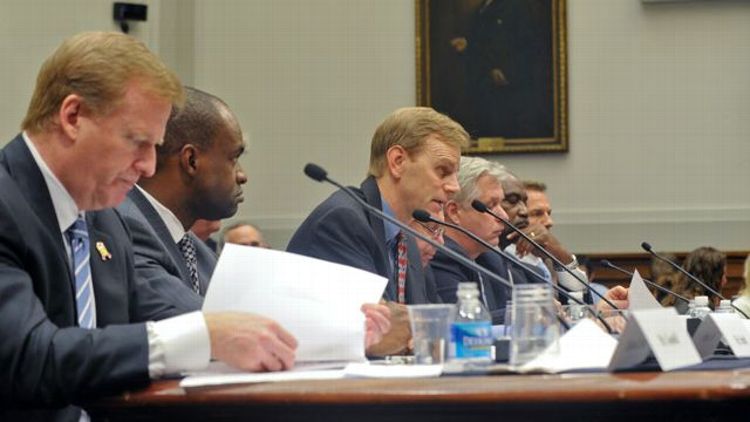 “There is a great deal of talk about the reformation of football, especially since the concussion of the brain, broken back, and other injuries on the football field were particularly numerous during the season just ended. But you can’t reform football. The only way you can reform a bad dog is by cutting his tail off close behind the ears, and that’s the way with football. When football is abolished, it will be ‘reformed’ and not before. Meantime, concussion of the brain will flourish …”

That’s a newspaper clipping from 1905, and here we are again. One hundred years later the questions are more or less the same. Can football ever be safe? Should we feel guilty cheering for a sport that’s dangerous for everyone involved? Would you let your kids play? And how much longer can football survive all these questions?

Every month now, a new story revives it all. This week all those conversations start with Frontline’s latest documentary, League of Denial, so let’s talk about it. It debuted Tuesday, and Frontline gave us two hours of documentary based on the work of two ESPN journalists, detailing the NFL’s attempts to downplay concussion science and use its phenomenal leverage to keep the issue as quiet as possible over the past 20 years.

ESPN, which owns Grantland, separated itself from the production. Regardless of why or how it happened, it created a PR problem for ESPN and a nice little bonus for PBS. Somehow a documentary about sports business and science wound up getting six weeks of free hype.

And the documentary lived up to it. For anyone who hasn’t followed concussion news over the past five years or so, League of Denial takes the work of brothers Mark Fainaru-Wada and Steve Fainaru — whose book of the same name is in stores now — and gives you two hours of recent history that will make you every bit as disgusted and depressed as the rest of us who’ve been following this stuff all along. It features the NFL doctors who mocked the idea that concussions were a serious problem, the handful of doctors who tried to prove them wrong and had their reputations attacked, and families of dead pro football players that remind you of the collateral damage we’ve seen in the meantime.

Some of it’s old news for people who’ve been following this story the past few years, but it’s jarring to see it all in one place. And if some of the more sensational stuff sounds familiar, there are less dramatic moments that make just a big of an impact. Like Leigh Steinberg remembering his time with Troy Aikman.

Aikman was concussed by a knee to the head in the NFC Championship Game against the 49ers in 1994. After staggering around on the sideline for a few minutes, he was transported to a local hospital. Steinberg visited him later and found him sitting alone in a dark room. Aikman asked where he was, how he got there. Steinberg explained it to him, and told him the Cowboys had wound up winning that day and were going to the Super Bowl in two weeks. They celebrated. Five minutes later, Aikman asked where he was and how he got there, and they had the exact same conversation all over again. Ten minutes later, same thing.

Next to anecdotes like that, the NFL’s years of denial and superficial science is that much harder to stomach. That’s what makes League of Denial so refreshing. Nothing in the documentary is breaking news, but if nothing else, it gives us a definitive document of all the NFL’s hypocrisy and ignorance that’s defined this battle from day one.

We may still be clueless about solutions, but making the truth as clear and undeniable as possible feels like the first step. Because players are still getting concussions every single week, because even in March a league doctor was doubting the effects of CTE, and because, as spokesman Greg Aiello accidentally admitted to the New York Times in 2009, “It’s quite obvious from the medical research that’s been done that concussions can lead to long-term problems.”

Meanwhile, Roger Goodell still won’t concede there’s a direct link between his sport and any of those long-term problems. The NFL has been studying concussions since 1994 and still pretends to know nothing. Outrage over football has been around forever, but it feels more justified now.

There’s a scene early in League of Denial that helps explains the role NFL Films played in football’s crossover to the mainstream. Its impact was really pretty simple: It made football look like the coolest game on earth.

Once you scored it with Sam Spence, threw some John Facenda narration over everything, and interspersed some grunting players and cursing coaches, all the chaos and violence in pro football became something like the coolest comic book of all time. And they didn’t promote the game in spite of all the brutality — brutality was an NFL Films specialty.

As one producer explained it a few years ago, “Curtis Martin takes a handoff and runs to the sideline. A defender comes up, and they collide right in front of me. I thought they were both dead. Two people that big, that fast, hitting each other full speed — I thought I’d witnessed a murder. Then they jump up and run back, and I saw it 30 more times in the next hour, and I realized that what you see from the stands is nothing. That’s what we want to show people: what it’s really like.”

But old NFL Films videos only gave us half of what it’s really like. We got videos with names like Thunder and Destruction and Moments of Impact, and they made it all look poetic. But we never had to see the guys vomiting after huge hits or fighting back tears as they got carted off the field.

This strategy worked great, actually. For the NFL and everybody else. NFL Films is a reminder of everything pro football used to be. Namely: easy to watch.

You could suspend disbelief and just play along when Deacon Jones describes Dick Butkus, saying, “He was a well-conditioned animal, and every time he hit you he tried to put you in the cemetery.”

It was fun, and football was awesome. We didn’t have to think about it too hard.

Now, though … No amount of editing in the world can distract us from what football is really like. Toward the end of League of Denial the topic turns to Junior Seau, and they cut to NFL Films footage in which he’s talking about the joys of hitting and hearing opponents moan in pain. In a movie full of gut-wrenching images and themes, that sequence is right near the top. Regardless of what happens from here, football will never go back to the days of NFL Films and Sam Spence music turning this stuff into violence poetry.

Besides, the NFL’s doing better with what they’ve got now. The role in selling the game to the mainstream now belongs to NFL Network and ESPN. And it’s working. Football was America’s favorite sport when I was a kid, but in the past decade the machine’s gotten so ubiquitous that now it feels like NFL is just an extension of America in general.

You could come up with a few factors that helped the explosion.

• The Internet made it easier than ever for people to get involved in fantasy football and online gambling.

• Sunday Ticket and then the RedZone Channel have helped us follow everything at once, like going from cocaine to crack.

• And the evolution of the online news cycle and 24-hour sports news has helped keep everyone addicted during the middle of the week, and even for the six months of the offseason every year.

And every factor that’s helped make the NFL inescapable also makes it pretty much impossible to ignore the truth about what concussions do to football players.

The Internet helps spread heartbreaking stories that would’ve otherwise gotten lost, networks like ESPN and NFL Network replay every nasty hit and report on every awful injury, and everything happens in high definition. Every hit that used to look awesome in 1998 is cringe-worthy in 2013, when you have a crystal-clear shot of some helpless receiver having his head snap back as his body crumbles to the ground. The suspension of disbelief we used to enjoy with NFL Films has been replaced by hyper-reality.

Add documentaries like League of Denial to that mix while Goodell makes commercials directed at your mom, and it makes the whole game a lot harder to enjoy.

This could go on forever, too. The PR campaigns, the safety measures that won’t solve anything, the retired players suffering. Football is so ingrained in our life and the NFL is so powerful that all the documentaries in the world may not change anything. The next time there’s a collective bargaining struggle, when the owners decide to screw the players out of a little more leverage, they can force everyone to sign a clause stating that head injuries may cause problems later in life. And players will sign it, because what else can they do?

So we’ll keep having this conversation.

The stories will only get more vivid. Scientists will come up with a test for living athletes, and then we’ll have to watch football players either ignore the test itself or ignore the test results and keep playing. At the same time, other retired players will recognize the side effects of CTE, and they’ll start speaking out about the consequences.

Because for every player who takes his own life, there are probably hundreds more who suffer in silence. Guys like John Mackey, a Hall of Fame tight end and former NFLPA president who spent the final years of his life with dementia in an assisted living facility, struggling to pay for his care on the NFL’s $2,500-a-month pension. Or Ricky Watters, who was honored in Philadelphia last year and admitted he’s got arthritis all over his body and suffers from head trauma, too. For them, the “crisis” is daily life.

Midway through League of Denial, Steve Young talked about all the linemen he worried about, the former running backs he played with, and the concussions “that you never feel until it’s too late.”

And that’s football. Where the hits that look like murder happen 30 times an hour, and players don’t feel the true effects of anything until they’re Mackey or Watters and it’s way too late to decide if it was worth it. That’s what it’s really like. I don’t know if we need more reminders of all that, but we’re going to keep getting them anyway.

The NFL Films Era is over and this is what we have instead. I love football, and I hate talking about concussions, but everything we know about football makes it impossible to choose between the two without being just as reprehensible as an NFL doctor.

The Designated Player: Does Anybody Want to Win the Supporters' Shield?